Which games are better on a Macintosh?

So if one was to play the old Mac games, I assume emulation isn't as optimal as real hardware which probably has a much higher cost than PC. I've never been into apple stuff, but do recall finding my ex brother in laws Mac compelling back in the mid 90s. I have no idea what it was beside some decently powered monochrome monstrosity.

Another advantage on AITD for Mac over PC, at least for me, is that you could run by holding "Shift" instead of double tapping "up". One big disadvantage is the annoying stairs bug where you get stuck when playing on faster machines. The music system also seems more precise, as I recall the PC version randomly triggering the danger song even without hazzards in the scene (and what a haunting song). For some reason, the PC version never had a working SBPro driver. AITD 3 has a Windows port which is able to run on hi-res, but these modes only stretches things out keeping the same 320x200 looks, unlike its Mac port.

I think that sense of this thread is actually point out that there are some Mac versions of games with some additional features or improvements.. but its not realistic to expect some complete of analysis and comparison of multiple version of games per by frame or something like that.

Flashback: i started playing the game last year on dos and Mac but i continued the game until i finished it only on Macintosh because the graphics were so much better

Yes, I know this version. I would like to have a complete Sega Mega CD with 32x (and a Panasonic 3DO) but the prices are too high so until now i am stuck with computers only 😀 . Blackthorne is definitely one of the games i would play on 32x and of course adventure games on Sega CD like The Secret of Monkey Island and Rise of the Dragon 😀

I'd rather play Prince of Persia on Super Famicom

in original game by looking at the edges of the chamber (top/bottom/left/right) you can tell what's on the adjacent chambers. snes vesrsion's extra chambers often don't bother such details... adjacent chambers simply don't match to each other.
it's those tiny ditails and high level of polishness that makes pop so great and unique.
snes ver simply doesn't fit that category. it's just a poor quality slasher

@Utafuinki - That was a pretty solid rant on Prince of Persia (one of my two favorite game series), so thank you for that. Some good points. I want to address this specifically:

The other point is, everything is suddenly cartoony, with a black line around everything, even the torches on the wall! Also, they 'redrew' everything, so the original style is gone

This is pretty much how Prince of Persia (2008) was handled. And I found I actually liked this cartoony style.

that's Ambient Occlusion
it only adds to realism

Another advantage on AITD for Mac over PC, at least for me, is that you could run by holding "Shift" instead of double tapping "up". One big disadvantage is the annoying stairs bug where you get stuck when playing on faster machines. The music system also seems more precise, as I recall the PC version randomly triggering the danger song even without hazzards in the scene (and what a haunting song). For some reason, the PC version never had a working SBPro driver. AITD 3 has a Windows port which is able to run on hi-res, but these modes only stretches things out keeping the same 320x200 looks, unlike its Mac port.

I agree. Alone in the Dark looks so much better on Mac. As i have mentioned, my Power Macintosh G3 Minitower and the Cyrix Dos/Windows 95 PC are connected via a switch with the same Sony monitor. The Performa 6116CD is connected with a Macintosh Color Display monitor which is exactly next to Sony. On lot of games the picture on Mac look much brighter and sharper than PC VGA. Alone in the Dark indeed has a stair bug and there's also a fix for that. On the other, PCs have lot of games that support Roland and General Midi which makes the sound of games a great experience.

Some pictures that i took some years before from my Performa 6116CD via print screen capture method. Then i copied the pictures on a floppy disk and copied them with an external usb floppy drive on my Imac. This is exactly what you see with the Macintosh Color Display Monitor:

The other point is, everything is suddenly cartoony, with a black line around everything, even the torches on the wall!

that's Shadow Of The Flame

To be fair there are some issues with classic mac-gaming too.

1. Finder vs. Multifinder when playing games that run in window-mode and not use the full desktop. Mostly early titles.
2. 32Bit Quickdraw either in ROM or as a system extension which breaks compatibility for older games, but is required on newer ones.
3. Ugly timer-bug on sierra-adventures with 1991+ System-Date.
4. The change from 68k to PPC especial for games that are too fast on PPC or run to slow or laggy on PPC because no native PPC code.
5. The lack of system-performance when playing in hires-modes. Lot's of games are not native hires, they scale 2x to get 640x400/480 output and this reqires cpu-power because the video is mostly an unacclerated framebuffer. Some tricks are possible with a big(ger) cpu-cache that fit's the framebuffer entirely on ppc.
6. The lack of real FM, if you play those titles you will recognzie that an adlib or sb-fm is far better than what you get on mac with FM emulated. E.g. Monkey1/2 are terrible slow on 68k if you don't use 68040/25+ Mhz.
7. Some titles which are native on mac and use hires not only for the UI when the image is only scaled 2x then you have mostly an excellent version.
8. Lot's and lot's of games are available on 68k and early PPC, mac-gaming was much much better these days.

Not everything was better then...but some games are really nice on 68k early PPC.

That's why i believe that you need at least two or three computer systems in order to play more and more games. A game cannot run for thousand of reasons. Some examples:

Rex Nebular: it runs only when 32bit addressing mode at the memory panel is disabled. This cannot be changed on PowerPC systems. So you need only Motorola Macintosh with older version than Mac OS 8. The game runs only on my Macintosh LC475.

If you want to play it all you need 3 machines+

I just managed to solve the "stair bug" on the Mac version of "Alone in the Dark".

I found every time you SAVE the game, the game creates a new animation, and doesn't continue the old one.

So to solve the bug, all you need to do - is to SAVE the game while going down the stairs, and then LOAD the game, and after half of a second, SAVE the game again, and LOAD it again (practically you SAVE and LOAD frame after frame), until finally you will LOAD the game at the very end of the stairs, but now you will find the animation has stoped and the player won't go up again. 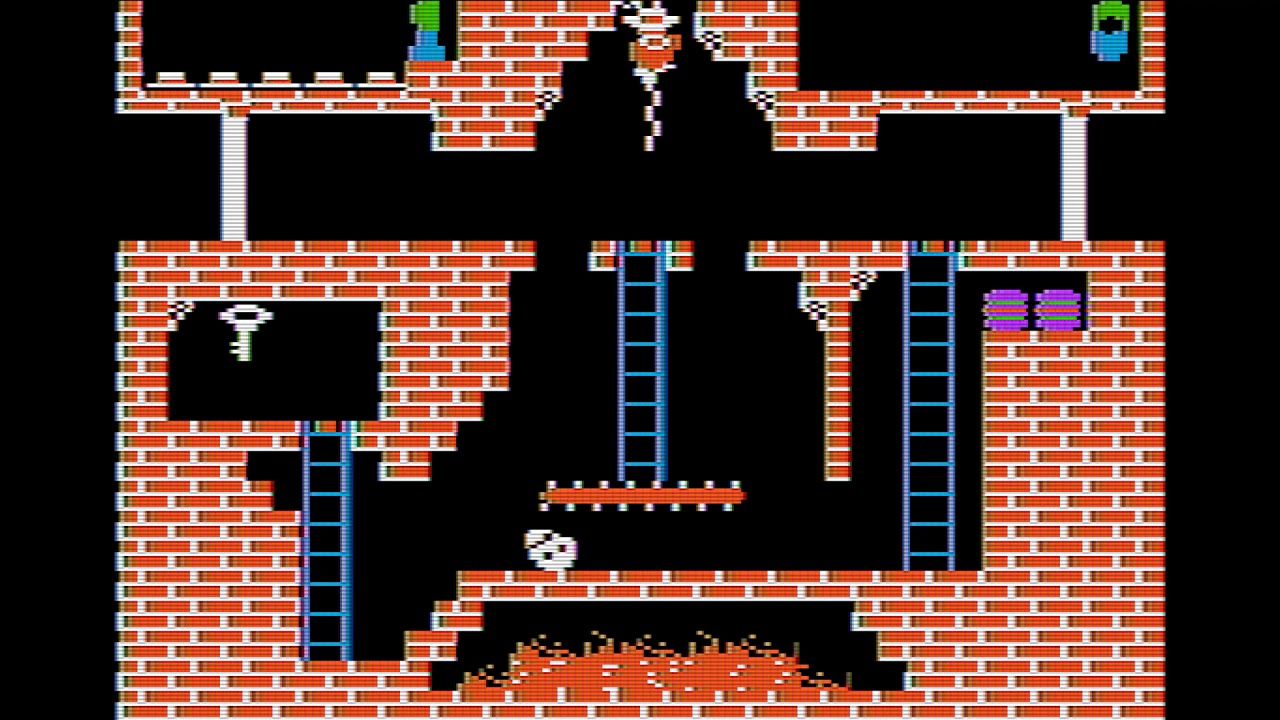 in my opinion the colors in Dos looks wrong:

That is Apple2 not macintosh.

That is Apple2 not macintosh.

Montezuma would be interesting in B&W

Prince of Persia Dos vs PC