EDIT: I made the current state of the Widescreen mod ( v5) available for testing purposes:

EDIT2: File got deleted from the server. Here's the new link:

This is a patch for Mech Warrior 3 to allow setting higher resolutions without making the game crash when pressing Esc.

As always USE AT YOUR OWN RISK!

Here's a quick and dirty patch with working Options menu.
The downside is that the menus will look a "bit" uglier. 😊
When you go to options from the Pause Menu for the first time some buttons will be missing, just go back to the previous menu by pressing Esc then click on options again.
I didn't have time to test everything so there might be other issues.

Edit: Clicking on Options still makes the game crash at 1280x1024, all other resolutions seem to be fine.

Found a way to insert custom resolutions. Even widescreen is possible. However Mech3 is pretty picky about what resolutions it accepts, so far I haven't determined the logic behind this. Also the Hud doesn't scale properly.

Is there any way to go beyond 1600x1200? Would be nice to run it at any arbitarty resolution.

Is there any way to go beyond 1600x1200? Would be nice to run it at any arbitarty resolution.

I couldn't get any of the resolution bigger than 1600x1200 that I tried to work but that doesn't mean there aren't any.

In case anyone wants to give it a try here's a howto:

Launch Ollydbg and open Mech3.exe
Click on View->Executable Modules and select Mech3.exe (it should be right at the top)
Select the "CPU -Main thread" Window and scroll to the top
Rightclick in the Window and use
Search for->Command to find mov ecx, 640h
If you scroll up a little bit should see this

Each resolution is listed 3 times

You can easily convert decimal and hex values with your Windows Calculator. Press Alt+3 to switch to programmer view, with "Dec" at the left selected enter a decimal value and click on "Hex" to convert to hex.

You have to do this 3 times each.

After that do a search for MOV EAX,480 and MOV EAX,360 to replace those as well.

To finalize the changes do another rightclick and select Edit->Copy all modifications to executable.
A new window will open. Rightclick on it and choose Save File... .

For the sake of KERENSKY! 😁

Can't see the screenshots in this page!
Is it expected that the HUD is not centered, teleguy?

All image attachments on vogons.org are temporarily disabled.

In order to properly display the HUD reader.zbd has to be edited. Since I couldn't find the official Mechwarrior 3 mod tools that are needed to do that anywhere on the net someone else helped me with that.
This is what we completed thus far:
http://s000.tinyupload.com/?file_id=98686211436986162560

We're still trying to find a way to change the FOV.

It's a patch to fix crashes when targeting at high resolutions. I was never able to trigger such crashes but I couldn't find much info on when they're even supposed to happen.

teleguy, thank you so much! 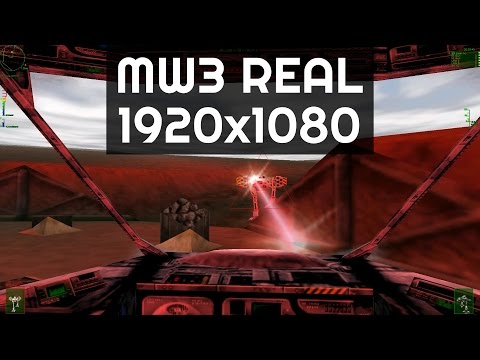 I initially didn't realize the newest version was in the first post, so I was trying to go the Ollydebug way to modify case 9 into 1920x1080. The result was broken. 😀

Will you try to scale videos, mission and menu screens as well or is that a losing battle?

I don't want to do anything about the menus, videos etc. Those are hardcoded to be 640x480, not selectable like the 3D mode resolution, so would probably be a lot harder to change.

The menus should already be fullscreen though, albeit still at 640x480, not in a corner like in your video.

The menus should already be fullscreen though, albeit still at 640x480, not in a corner like in your video.

They are fullscreen. It's just the way OBS records them when I do a 1080p screen capture. I'm just glad it works at all. 😀

I installed this high-res patch by moving the contents of the 16:9 folder into my MW3 folder and over-writing the two files that conflicted.

However, when I attempt to run the Mechwarrior 3 launcher, it says the Mech3.exe wasn't found. How do I fix this? I'd love to run above the native resolution!

I installed this high-res patch by moving the contents of the 16:9 folder into my MW3 folder and over-writing the two files that conflicted.

However, when I attempt to run the Mechwarrior 3 launcher, it says the Mech3.exe wasn't found. How do I fix this? I'd love to run above the native resolution!

Is Mech3.exe inside the game folder?

Edit: Antivirus tools sometimes block or delete new files. Can you try copying those files with your antivirus disabled temporarily?

Yep! Actually, it fixed itself!

I have no idea how. I set the launcher to run as administrator and set it in Win7 compatability mode, and it worked. However, I disabled these settings, and it STILL worked. So no idea why.

Regardless, this is fantastic! I love this high-res patch!

Is that a good way to know that it's working? I don't notice a ton of difference yet, but I've yet to play a lot yet.