Just few pictures some days before:

I just have some Apple Speakers with my Mac Color Classic. But I am considering a Midi device.

New to Vogons but here's my revamped KVM setup I finished up last night. I really need to get a new desk cause it's not strong enough and I had to prop it up with a thick oak slab underneath 🤣. Kind of a spaghetti mess in the back also but not much I can do about that.
Computers on top are are:
Dual p3/dual voodoo 2 in Inwin a500, ultra scsi 10k drives, still have to set up raid
grey one was a celeron but now an i5-6600k and GT 730TI running Ubuntu
XPS 630i with core 2 quad extreme and GTX 460
XT clone case has a Pentium 2 266 and can't remember the other specs
Zenith 386 on top of that has a 40mhz 486dlc chip and tseng gpu
Ultra on top of that is a 66mhxz 486 dx2 with a Hercules Dynamite vlb card
At the top is the stock ps/2e my uncle bought new

Bottom from left to right:
ALR 6x6/Unisys Aquanta HS/6, work in progress
Athlon tweener system, nothing special just set up for max compatibility
PowerMac clone, (New York?) not too sure on specs yet
Dual 200mhz/1mb Pentium Pro machine, still in the process of setting it up
Aptiva 2176 that came from a scrap pile, one of the best little computers I've ever had

Wow that's a great setup. I really like all the systems you have setup

Welcome to vogons.org RadRacer203. Nice setup you have there.

I know what you mean by the desk bending. In my case it was huge crts. I've replaced the majity of them with good quality lcd monitors and the shelves have returned back a bit to their original positions 😉 Being old , not as fit as I was 25 years ago and good 5:4 lcd screens can be had for $nz10-20 now days.

Welcome to VOGONS from my side, always nice to “meet” new forum members. Gorgeous wall art you’ve got there... 👍🏻

Thanks all for the kind words! It's not much but it works really well for me. Loads more computers on top of these, these are just the ones I use regularly and can be kind of all stacked together unlike my XT's or Macintoshes

New to Vogons but here's my revamped KVM setup I finished up last night.

Nice set up. What KVM are you using? It's difficult to see in the photo...

New to Vogons but here's my revamped KVM setup I finished up last night.

Nice set up. What KVM are you using? It's difficult to see in the photo...

Some kind of Belkin 16 port unit, it was just the cheapest working one with all the cables I could get on ebay 🤣

my new work bench with lots of room courtesy of pier 1 going out of business.
steel frame with with casters too.
this wasn't a regular pier 1 item for sale, just some bench they had in the back that i talked them out of for $40.

Some very nice rigs you have. The duel P3 with V2 SLI and Duel PPro are the most exciting for me. Although I'm strangely attracted to that ear of Dell XPS styling in the last few years.

Some very nice rigs you have. The duel P3 with V2 SLI and Duel PPro are the most exciting for me. Although I'm strangely attracted to that ear of Dell XPS styling in the last few years.

Thanks! The ALR actually has 6 Pentium Pros, I'm in the process of setting it up now! The dual PPro is definitely better for normal use though. That specific model of XPS is one of my favorite computers ever and I'm still not quite sure why

Last year I dug up my first PC from my dad's place, he brought this to me in 03 when I was on 3rd grade, and it cost months of his salary.
However it was still a very basic model and slow even in best of its days. Had to decommission it for the poor performance in 08, and replaced with another C2D E7200+P43 rig.
Anyway I had a lot of time at home last year due to the virus. So I cleaned it up, hunted down two 512mb sdram, brought bunch of capacitors, learned how to use an iron and recapped a few dead ones. Also replaced PSU with a similar modern model from the very same manufacturer. It's designed for industrial use now, but I doubt they have any gamer model PSU back in 03.
Back in the days I already trashed my floppy drive, keyboard, mouse and speaker. CRT monitor was spared but not sure if it still works, too heavy and big to test or move.
Recently I got a brand new mouse with ball (I don't know the formal name for these kind of old mouses), and the very same keyboard from my original set. But the multimedia key on the top doesn't work, can't find win98 driver.
Also brought an used Dell monitor online with very cheap price, and plugged a Dell speaker below it.
Now it works fine with Windows 98se, but I'm still struggling to get the graphics driver for my newly brought Radeon 9000 working.
New CPU fan is on the way, the old one survived for almost 20 years and sounds a little loud.

Nice and clean setup!
Beige monitor would be great!)

Nice and clean setup!
Beige monitor would be great!)

that is just my work area and the nec lcd2090uxi is an awesome 4:3 lcd monitor so it works perfect with everything i own.
this is actually my play area with a 21" viewsonic pf817 flat crt that i paid way too much for but, i had to have it cuz i am dumb. 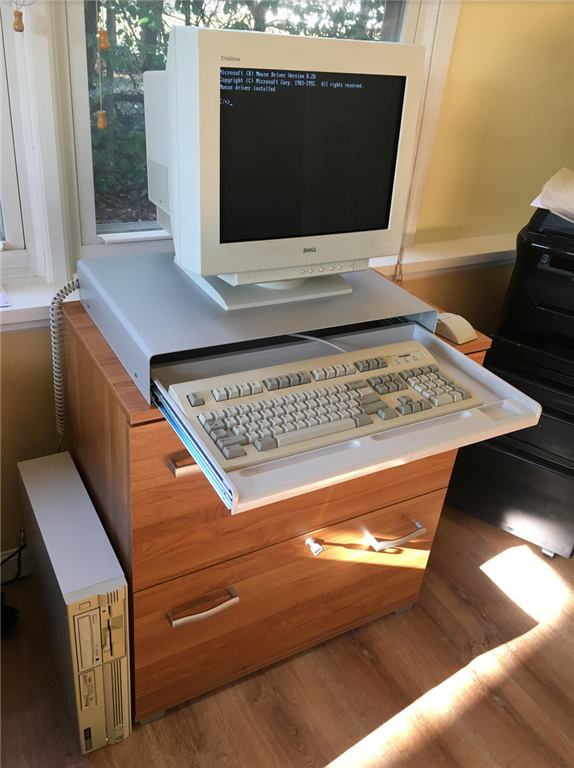 Behold my Tandy 425SX battlestation! A bit minimalist compared to some awesome rigs here but it is what it is.

Wouldn't it look a lot better with the tandy beneath the monitor instead of on the floor?

Behold my Tandy 425SX battlestation! A bit minimalist compared to some awesome rigs here but it is what it is.

I have no clue what I'm doing! If you want to watch me fumble through all my retro projects, you can watch here: https://www.youtube.com/user/MrDavejustdave