I am about to build an ultimately '' ol' hardware compatible '' + ''efficient computing power '' machine. The specs are the following (for now & adding available pictures): 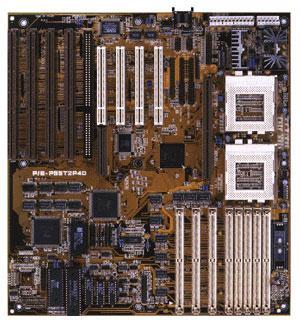 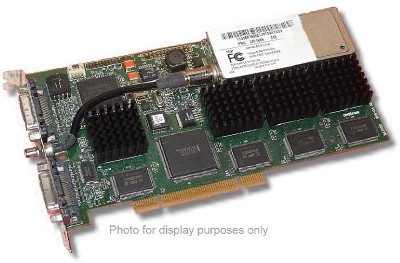 The board isn't actually the same, just rip out the additional power plug, ASUS just made som VRM improvements for split voltage control...

So this is going to be built hopefully during the next week, I got everything except the CPUs and the G200, which are both now being sent from UK...

Very nice machine for ultimate compatibility with MS-DOS apps and games (thus using the G200 for its superior performance in 2D graphics) + the voodoos for better OpenGL & glide stuff under XP on the other hand 😀 The only miss is the sound card, can anybody advise a very good one, but not resourcefully exhausting?

P.S.: I will provide more pictures as soon as it's complete

That looks like a really sweet motherboard. I've never seen one of those before. A couple points I notice about the planned system, though:

First off, XP seems like a really bad idea on that system. Yeah it'll run, but it'll suck. You'd be much better off going with Win2k... you still get the benefits of a (comparatively) modern OS, with much lighter footprint.

Secondly, don't get your hopes up for smooth sailing with that PCI combo card. The Via disk controllers are notorious for being troublesome in getting them to boot, even in newer boards. They work fine for storage drives and whatnot, but as far as running an OS from one, expect difficulties, at best.

Also... a U160 EISA card? I think you may have something mixed up there. Even 40MB/s UW SCSI controllers are uncommon, since the bus only supports about 33MB/s anyway. U160 would be a complete waste on EISA, and I quite doubt such a thing even exists.

As far as a soundcard goes, I know the Yamaha YMF7xx, Crystal CS423x and ESS Audiodrives work pretty nicely with everything from DOS on up to XP. Those are also pretty common and cheap, and have generally decent audio quality.

I didn't know there were dual Socket 7 boards - that's awesome! 😁

We'll see about the XP, of course you are right, Win2k IS definitely lighter, but just giving it a try...

The via will not be used because there is an IDE onboard...

the U160 - I'm not sure if it is that, it should be at leas FAST-2 solution, I'm gonna check... Of course EISA wouldn't suffice enough, as you described in easy math...

thanks for the sound info, will look onto the ebay.

Where'd you find that PCI sata/usb/ide controller anyway - I've only ever seen PCIe versions of that.

One more thing regarding the sound card: I REALLY require the MPU-401 option - the General MIDI support must be available !!!

On the other hand, both XP and 2K were pretty sluggish on a dual Pentium Pro 233 (1MB L2 each) box with 256MB that I set up once. You may not want to mess with NT5 at all. Older NTs are rather useless for us, but I imagine that it is what was run on this sort of hardware.

I've run into a guy who had XP on 64MB. I just blinked. The world scares me.

That's very dissapointing that the 1MB cache did not help much...but the MMX should be a help...unfortunately I have finally discovered the bus frequency for the SIMM:

So if this board had the DIMM slots implemented, it would be easy for the to load XP. Was the board equipped with SIMM slots?

I don't think MMX helps with Windows XP performance at all. It does help with some games and maybe parts of DirectX. What will help XP compared to a regular Pentium is that the P55C has 32K L1 cache.

SIMMs on a Pentium or Pentium Pro mobo run at 66 MHz with wait states. This is the same clock rate as the system bus and L2 cache. The performance difference between SDRAM and EDO DRAM at the same clock rate is not that great, especially if you have L2 cache. SDRAM didn't show its clear advantage until it went to 100/133 MHz.

There really isn't an inherent advantage to DIMMs over SIMMs. SIMMs are 32-bit, meaning you need two to fill 64-bit DRAM banks. DIMMs are 64-bit, meaning you only need a single DIMM for a 64-bit bank.

How do you know the SIMMs are the same as FSB? I have not been able to find this info, but badcaps guys clearly expressed they're max 20MHz, so that it cannot be 66MHz...

They run at 66 MHz but the wait states make it so that the RAM doesn't have to respond at 66 MHz.

Look up video card specs because many of them used FPM/EDO DRAM. You can look up part numbers. And there is well-known info about memory clocks for Voodoo 1/2 cards, for example.

SDRAM is synchronous because it doesn't have those wait states.

I've also run into issues with XP not even wanting to install on older machines... like a dual PII 300 system I have here, 2K works perfectly, but XP hangs during text-mode install.

As far as the speed of SIMMs, yes, there are wait states involved, but also, the "ns" rating on EDO denotes the total access time, while the rating on SDRAM just states the cycle time. So 25ns EDO actually has a 10ns cycle time, same as 10ns SDRAM, and 60ns EDO generally has about a 25ns cycle time, which would make it good for ~40mhz actual speed (or faster, with wait states added).

I didn't know there were dual Socket 7 boards - that's awesome! 😁

What do you think, guys?:

Does it support MPU-401 functions?

i'd put xubuntu on it instead or dual boot cause xp would be heavy.

XP will run just fine with enough RAM. When it first came out, I ran it on an ultra-portable Sony "PictureBook" (something that would pass for a "netbook" now,) with a Pentium MMX 266 MHz and 64 MB RAM. Keep the third-party software to a minimum (i.e. no AV,) and it'll run just fine.

i'd put xubuntu on it instead or dual boot cause xp would be heavy.

try it with fluxbox? xp needs 512mb if your running A/V i have had only 1 machine witch could run A/v and fire fox and stay around 256mb usage. oh also puppy or damn small llinux?

try it with fluxbox? xp needs 512mb if your running A/V i have had only 1 machine witch could run A/v and fire fox and stay around 256mb usage. oh also puppy or damn small llinux?

Yeah, been thoinking of trying one of those Linux flavours but I'm crap at installing un-userfriendly lniux stuff