Well, literally the description is correct. It isn't right to leave negative feedback. But I'm thinking that nothing should prevent me from leaving neutral feedback, and describe the product:P

Yeah. You see, that way that cpu has almost one use. As decoration or for showing in a cpu collection. I'd prefer to pay a bit more for shipping, and have the complete motherboard even if it is non functional, to this...

Glue the useless chips onto the sides of various computers you no longer use and on a technicality, you won't be lying when you use the term "dual core" when trying to sell the systems.

Or buy a couple more and tile ur bathroom with em ;D

Glue the useless chips onto the sides of various computers you no longer use and on a technicality, you won't be lying when you use the term "dual core" when trying to sell the systems.

Actually, the correct term would be "dual cpu" 😜

Unless, I cut all the pins, and glue it directly on the cpu I suppose...

^and since already in the realm of really strong marketing, install Windows 3.1 and edit vgalogo.rle to look like the Win 7 startup screen.

I tried to run Quake. Hehe. It didn't run. Perhaps it requires a 486 or faster processor?

Once at the DOS prompt, everything is faster than ever before. This sequence of events has been repeated half a dozen times, to ensure it wasn't a one off fluke. Now, doom -timedemo demo3 gives me 2134 gametics / 9736 realtics.

This is very strange...25% overclocking doesn't bring any significant change in result. (: Have you ever tested your Cirrus Logic graphics card on 486 Motherboard? If so, how it compete to other cards (S3, Tseng, Matrox, etc...)?

Quake requires a FPU to run as well.

Retro games 100, what brand/size is that compact flash drive, it looks bloody fast going by your speedsys scores!

udam_u: I haven't tested the Cirrus Logic ISA VGA card in a 486 system yet. That's a good idea. I will try to do that soon.

dirkmirk: The CF device is really old and crappy! It's a 128MB Fuji model. If you attach it to a 486 mobo for example, you have to select "normal" and not LBA, because it's so primitive. That score I get is very normal, for a CF device. I've seen much higher scores, on 486 mobos. Eg 8000+.

Regarding cache: I found a box of the stuff. I picked out 9 chips which were identical. Slight problem: I don't know their speed. Their markings are:

If you look at Donut King's original post - the photo showing the cache chips. There's a chip there marked Q. I got a couple of these 386 boards, and the one I'm working on now has different markings! I don't know what this "Q" chip is, but this particular chip on my mobo has 15 written on it. Its markings are:

Anyway, to get back to the story: with these 9 different cache chips installed (256Kb), the mobo behaves in an identical manner to my first test board. I can get it to work with the 100 osci, at 20 MHz bus speed, but I cannot tighten up any of the BIOS timings. As soon as I set the BIOS field called "Auto configuration function" to Disabled, after the HDD is detected, the screen goes blank. It doesn't matter what the BIOS timings are set to - even if they are set to their slowest values, I still can't get the mobo to boot up DOS successfully. The only way to boot up is to set "Auto configuration function" to Enabled. I wish I could remove the 4x 70ns SIMMS, but I'll have to wait until my 60ns SIMMs arrive.

I can do another test now, however. I've found 4 15ns cache chips. That'll give me 128Kb of cache, but at least they are 15ns, because they are marked 15. I'll do that now, and report back with any results...

I've finished testing, using 128Kb of 15ns cache. I can't get the mobo to work any faster. It's the same story as before. The BIOS field called "Auto configuration function" must be set to Disabled, otherwise DOS won't boot up.

In the process of testing, I accidentally broke this thing. It's like a jumper. It's used to select what cache size your mobo has. Oops. How can I replace it, I wonder? What is it? Are there any "brains" inside the black part, or is it just simply a piece of metal? 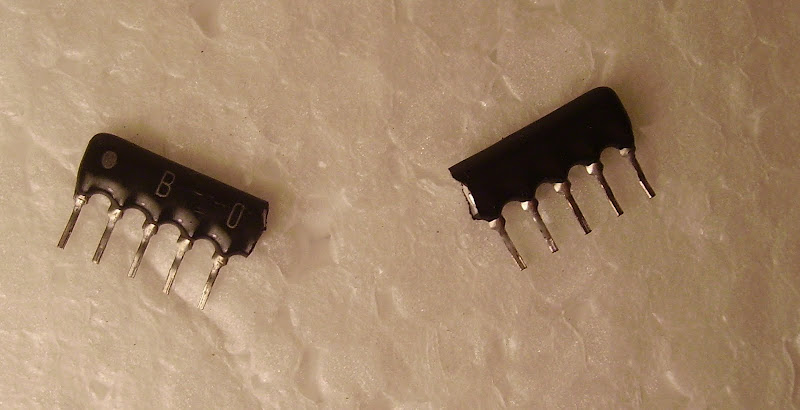 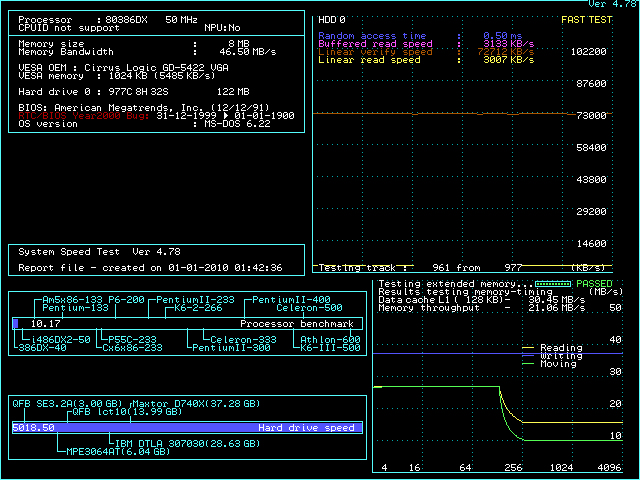 My 486 board has one of those, same markings and everything. I prodded at it with a multimeter and have attached a picture of how it seems to be laid out... basically it looks to be five jumpers, side by side.

Should be a simple enough thing to reconstruct.

Thanks a lot for the info! 😁

Maybe you should try some 12ns cache chips? JDRmicro had them, but they weren't cheap.

Maybe you should try some 12ns cache chips? JDRmicro had them, but they weren't cheap.

Unfortunately, I think that JDRmicro has sold out of 12ns cache chips. I must admit that cache chips is not an item I look for, when hunting for retro hardware. Perhaps I should look a bit harder for them. If anyone sees any, please let me know.

If you have no impovement at all using 15ns chips, I think it's not worth trying to find 12ns chips. I want to ask you sth else. First does your bios have an auto detect function for hard disks? And also, do you happen to have a CF card larger that 512MB to try to see if it would work? I'm wondering that because on my system I've installed a 2GB compact flash card as a d: drive, but while the bios detects it as 1985MB, the fdisk recognizes no more than 504MB. I know that 504MB is the limit for old computers, but I wonder if it could be overcomed, as the bios seems to detect it ok, and it would be a matter of a better/more recent HD controller. And I'm asking you that, because your controller seems way better than mine.

First does your bios have an auto detect function for hard disks? And also, do you happen to have a CF card larger that 512MB to try to see if it would work?

No this board doesn't have an IDE autodetect, and it doesn't support LBA mode which allows greater than 504MB disk space. That wasn't common until later in the 486/Pentium era.

You can try a Dynamic Drive Overlay (software solution- I personally haven't tried this with a CF card but it works with a normal hard disk) or you can get controller cards that have their own BIOS which support LBA and large hard disks.

OK, this is interesting. I go to the BIOS set up area, and enter "not installed" for the C: hard drive. I then reboot the machine. The BIOS POST display area tells me that the Siig Multi I/O controller card has found the 128MB compact Flash HDD OK, and DOS boots up as normal. I then remove that CF device, and replace it with a 133x Transcend 2GB CF. And the same thing happens - the I/O controller card "automatically" detects this CF device. The BIOS POST display says that the I/O controller reports a 1911 MB device.

For this 2GB CF, I decided to boot up using a Windows 98 bootup 3.5" diskette. I did this because booting up Windows 98 on the 2GB CF was causing errors. This is probably because that Win98 installation thinks the "sudden hardware change" is too problematic, because I was previously using it on a Slot 1 mobo.

Edit: Another good thing about this Siig IO controller card, is that I can plug in a DVD-ROM reader in to its secondary IDE port, and it works.