You mean you've never ginned up DCL in EVE? Me, I love DEC terminal function keys.

If you want really fun game, try opening TECO, randomly mash the keyboard, and try to predict what will happen.

Not a permanent setup of course, but here's a picture of two 286 rigs I've been working on these last few months, and my Turbo XT (bottom right). I'll make threads with more pics in the system specs section sometime soon. Holy servers, Batman! Did those things run Windows NT 4.0 Server in their lives? Very interesting, and kudos to you for saving those servers. I remember back in October, 2012, I saved a Dell PowerEdge 6300 server from getting tossed out. I still have the hard drives and the processors (will be used as record holders) to this day.

Tru64 Unix was their native OS from Compaq. It wasn't bad, had some quirks, but overall pretty solid.

My K6-2/V2-SLI system has moved from its Elan Vital T-10 case to something that looks more contemporary for it, something that resembles the Aptiva and Presario cases with front doors..

Never mind the P4 and ASUS badges, they will be replaced tomorrow with K6-2 and 3dfx badges (currently being printed).

I did not bother with retrobrighting the front panel, I'm not sure that it's worth it. 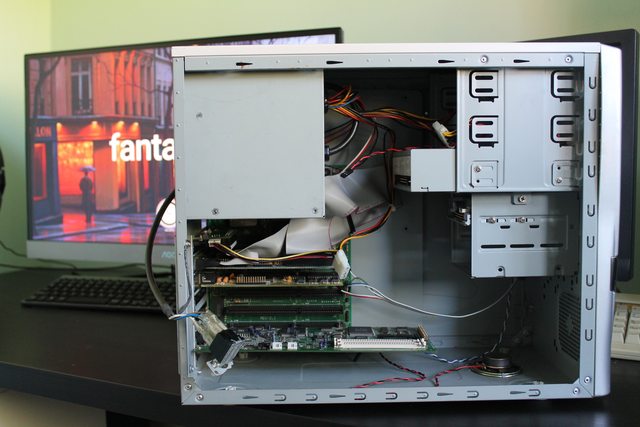 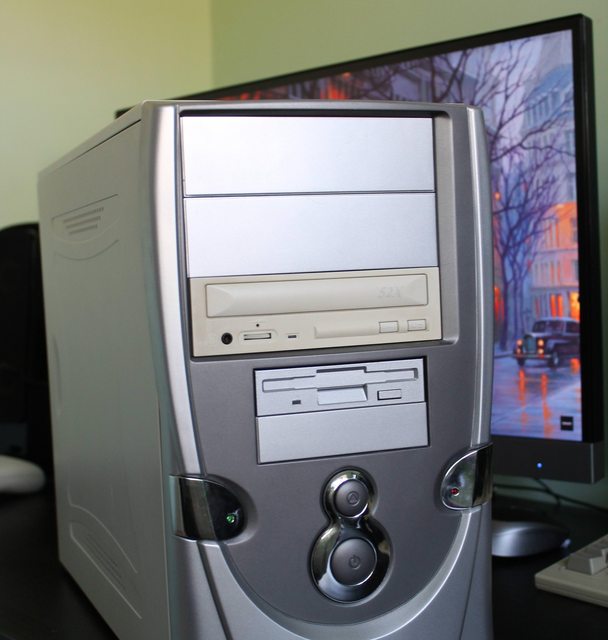 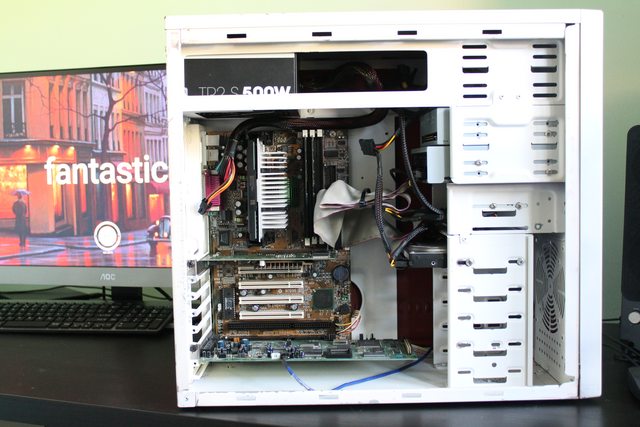 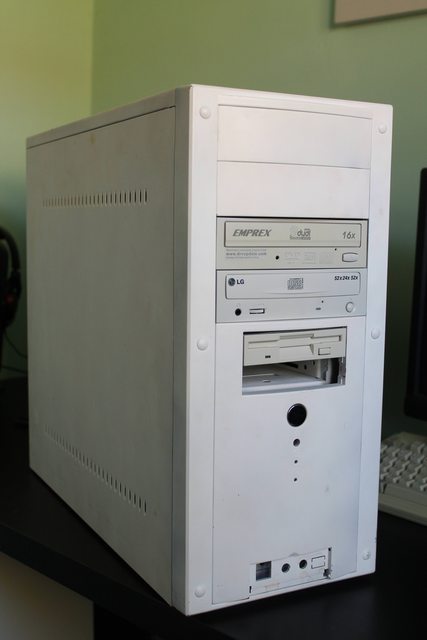 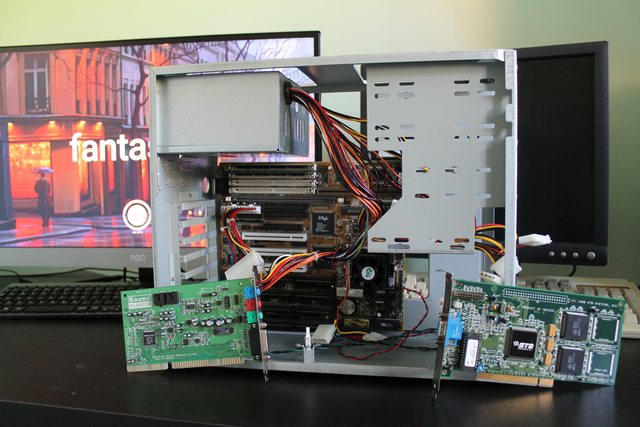 Lucky Star P45CE Socket 7 Motherboard
Cyrix P120
16MB "Topless" RAM
STB Lightspeed 128 PCI
IBM DJAA-31700 1.7GB HDD
I seem to have killed it by taking it apart as it was working before that.

Another oldie but goody!

Figured i would relive my intel 486 dx4-100mhz days from 1996, apparently, i kept the original video, sound, mem around, but i haven't the slightest clue what happened to the 4x cdrom, 850mb hdd, 486 chip and mobo, misplaced or something, i cant remember, but i've kept just about everything since the begining.

Its been around 18yrs since i messed with any computer using straight up DOS, im learning all over again, and at a snails pace for now, but its slowly comming back to me, its fun to get back to basics when windows has made computing so much easier, simpler and much faster, i've installed just a few full version games, it wont be much since its a small hard drive, like fan favorites, doom/doom2/duke nukem 3d/wolf3d/hexen/heretic/quake and descent so far, all of them play surprisingly well with this low spec machine.

But alas, the downgrade will only be temporary, to put it back the way it once was, but its been forever since i've actually had the pleasure of getting back to my roots... computer roots. 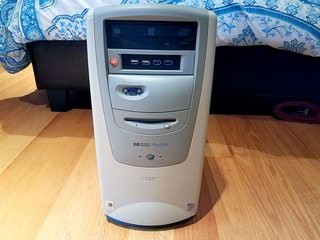 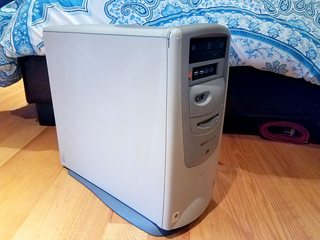 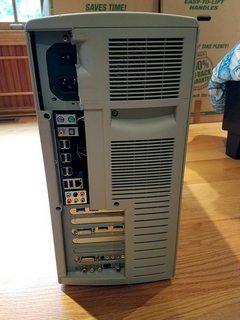 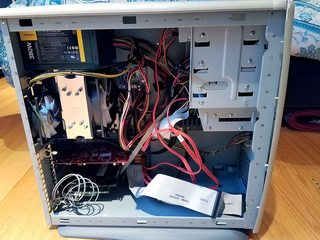 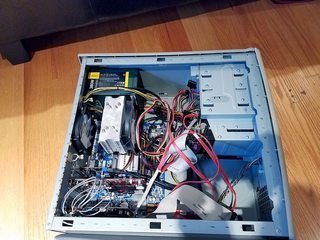 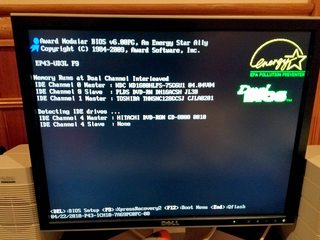 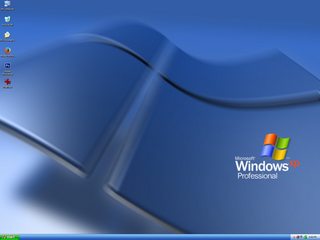 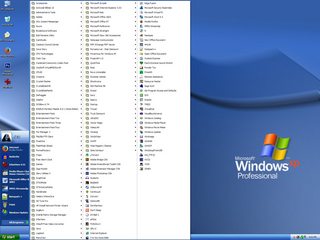 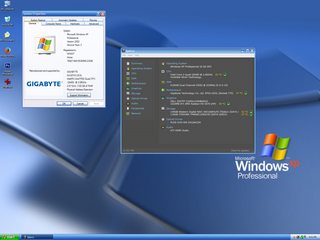 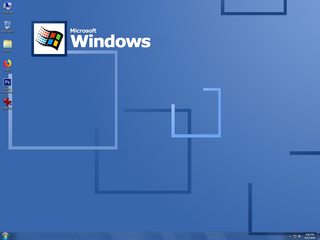 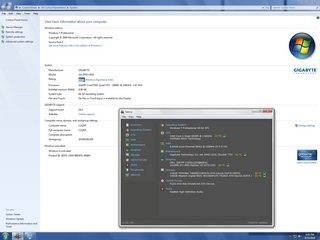 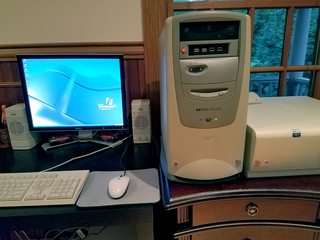 As ugly as it is, works like a charm.

I realize it's not half as pretty in its new housing, but I think that will change once I retrobright the front panel some day.

The T10 is now housing my Socket 754 Athlon64 3200+ / Radeon X1950PRO AGP system (which is currently not working due to wahat I think is either a weak PSU or a VIA vs ATI driver mess; either way that PC has issues that need resolving 😕 😎 )

I think that it is more like 1998-99. I clearly remember I first used them to upgrade our office PCs from pentiums to PIIs in that time period.

I'm an old man though, clearly remembering things that never happened, from time to time 😊 (P4s was not that widespread before very late 2001 - early 2002 IIRC)

While wandering around a forgotten corner of my hard drive I stumbled across some pictures of a sadly missed computer I had sometime in the mid 2000s. It wasn't retro then, but it is now. Also the digital photography is decidedly vintage.

I don't remember exactly what the case was, only that it was a monster cube with 14 drive bays, though I only managed to fill 10 of them. I had an extensive digital media collection I guess. Those drives made nearly 2TB altogether.
(Edit: It was a Yeong Yang Cube case)

I built it just after the Athlon 64 X2 had come out, but they were so expensive that it was actually slightly cheaper to build this dual-Xeon monstrosity with an Asus NCCH-DL https://www.asus.com/Commercial-Servers-Workstations/NCCHDL/

I mostly played Battlefield 2 on it. Sadly missed machine, I don't own a single bit of it any more.

That's a Yeong Yang Mid Cube YY-B0221. I have that case in black in storage. It weighs a good bit. Thank god for the castor wheels!

Cubes always seem to be there, but a minority in the case field. There was a recent small cube mobile gaming rig, and of course the Mac G4 and NeXT, and in the early 90s Everex had a 486 cube (big one IIRC, lots of drive bays) as a workstation-class machine. 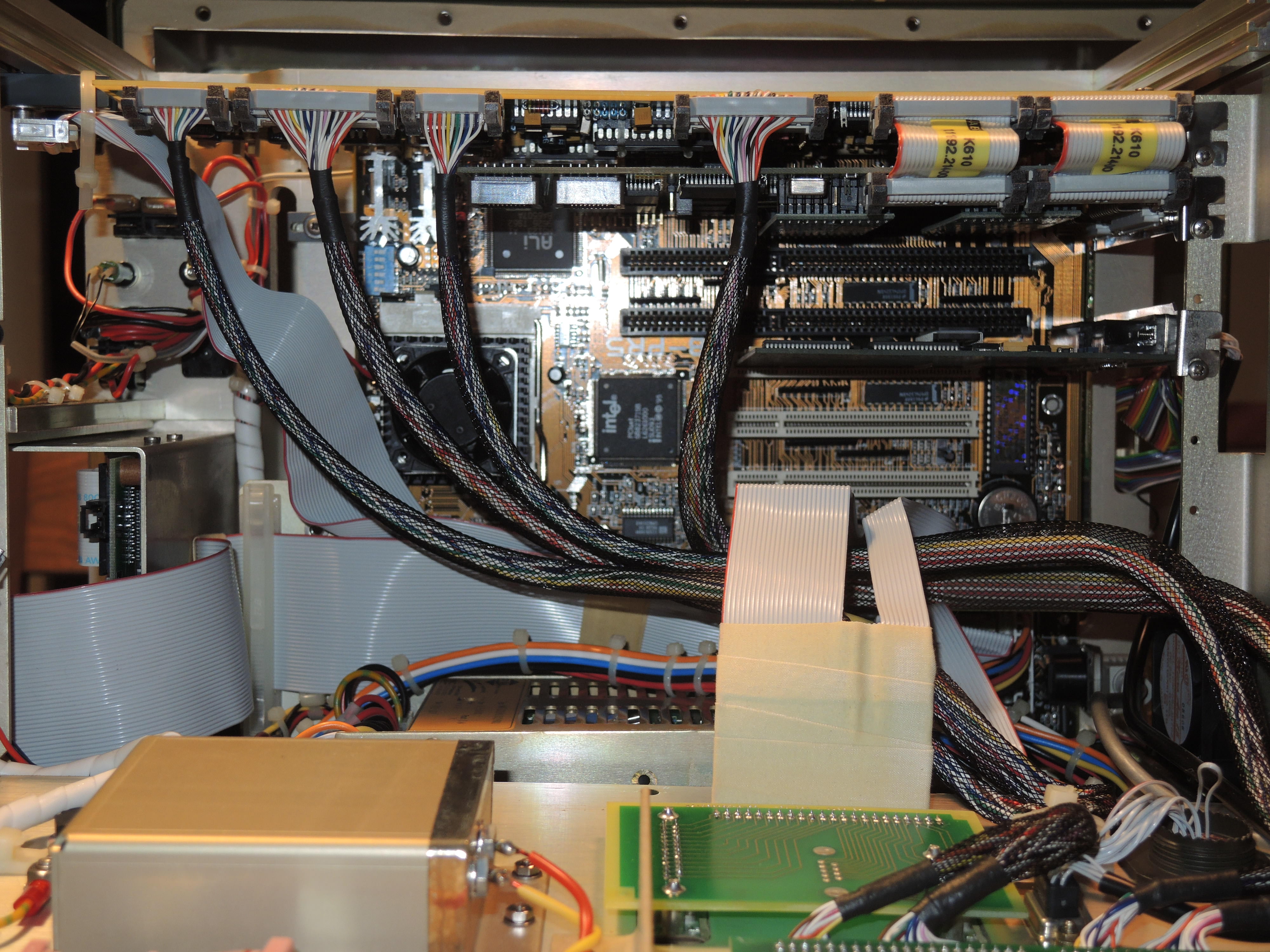 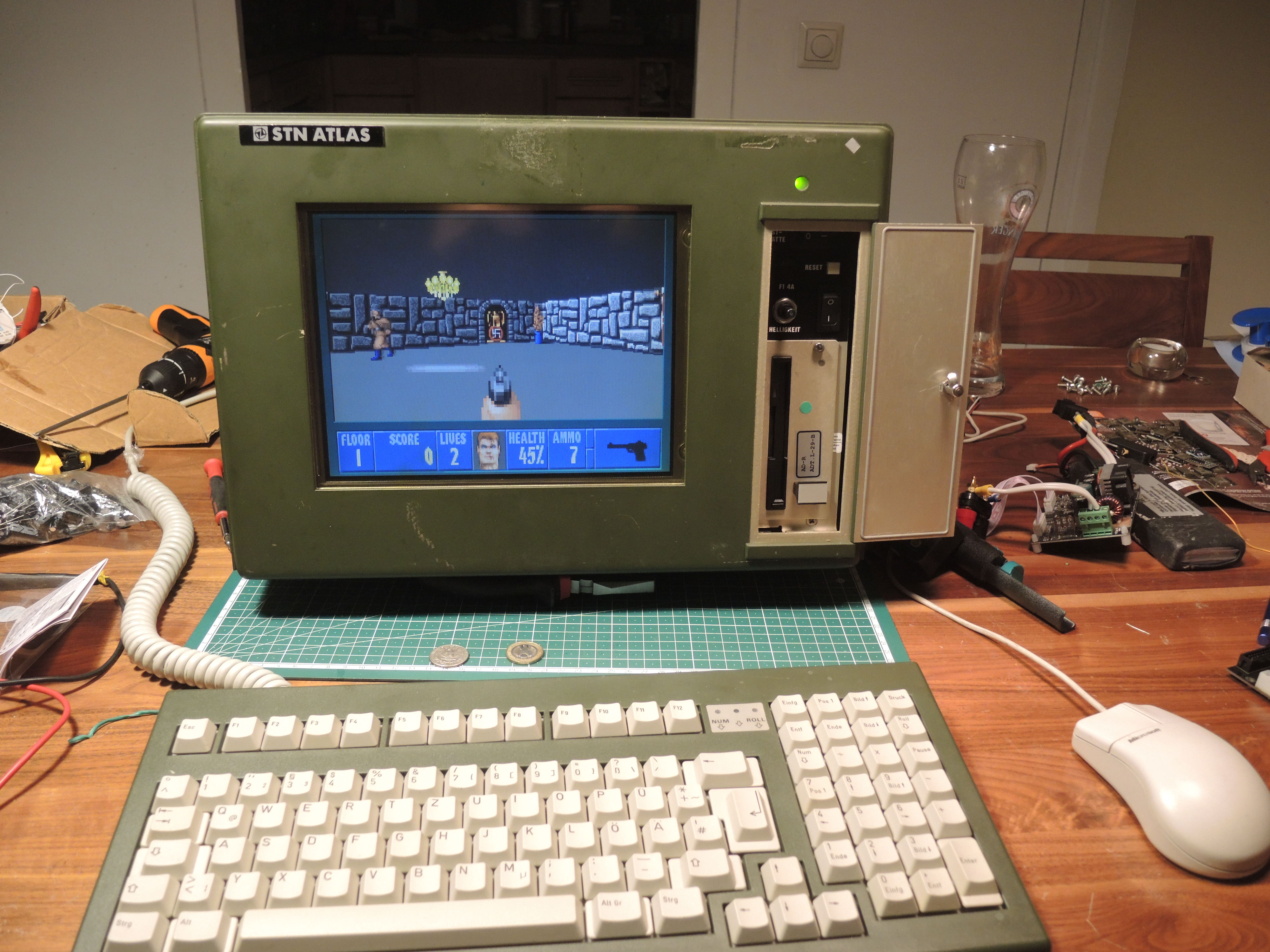 Very nice system. How is the TFT-screen?

There was one on German ebay recently. The manufacturer was a German defence contractor and the machines appear to have been used as data terminals by the Bundeswehr. There's some pictures in the auction of the backplate with inspection stickers and stuff:

Very nice system. Looks like a great compact and solid 286 setup. Looks like the MB is made in the USA too. nice.
Are you taking advantage of the turbo button capability? I could not make out from your photos if you had a turbo button or not on the front of your case.
If you are, what sound card(s) are you planning on using for this setup?