I only really hate it for the fact I can't overclock the FSB much past 66mhz. I reach a freeze by 75mhz.

I'm also limited by the choice of AGP cards due to the voltage requirement of the early AGP slot, so the 1999-2000 gap of unregulated AGP video cards (mostly Nvidia TNT2/Geforce and S3 Savage4/2000 AGP 2x/4x cards) are a no-go in a 440LX, so you're stuck between a Voodoo and a Radeon/Kyro place... and although you can throw a Radeon in there, i'd choose the Voodoo3 for the greatest balance of support of legacy 3d capabilities (paletted texturing and table fog) and VGA.

Actually the Rendition was all I had lying about.
My other AGP cards are much later ones like the 6800GT.
Take your point though.

I say: That time - before the release of the Intel 440BX chipset (April 1998) - Intel 440LX was the best PII chipset on the market (and my favorite board is the Intel Desktop Board AL440LX).
So to complain for the 66MHz FSB only and the AGP 2x only it is a bit similar to owning an early PCI 1.0 motherboard and hate it for the not supported PCI 2.0 cards.
If someone want to bild an end-1997 highend gaming "time machine" desktop PC (with AGP support) in my opinion the Intel AL440LX is the best choise (or other board with 440LX). That time the Pentium II 300 (4.5 x 66MHz) was the top, Riva128 and Rendition 2200 are was the top AGP cards.
Intel Desktop boards (at least that times) have really good quality (for example quality of the capacitors). If I find AL440LX on local online markets, I will buy it. 😀

Did a quick search of our local Ebay equivalent (Mercadolibre) and found one on sale at about USD$3.
I think I'll snap it up.

You are really lucky. 😀

The mobo I was donated is indeed a PC Chips. M810LR-H fitted with the Duron 750.
It was free so I shouldn't complain.

I'm not familiar with Socket A boards but if it works and it was free too, it is really great. 😀

I think they must have developed PC Chips for the third world as I must have worked on hundreds of them over the years here.
Those along with the dire Noganet products which frankly deny description.

So to complain for the 66MHz FSB only and the AGP 2x only it is a bit similar to owning an early PCI 1.0 motherboard and hate it for the not supported PCI 2.0 cards.

I was seriously trying to clock it as high as I could for decent Q3 framerates, it shouldn't feel so obsolete just a year after the market 🙁

Quake III has come out a bit more than two years later as 440LX. I think Q3 was too much challenge for all two years old desktop systems. When Q3 has come out, the Athlon CPUs are already on the market (up to Athlon 750) and Pentium III "Coppermine" too (up to Pentium III 733), and Intel 820 chipset also (with AGP4x).

"Obsolete after a year" - wasn't this more often the case than not with 90s PC hardware? Or perhaps two years.

I swear that there was a version of the SE440BX that had a similar Yamaha chipset, which would do faster CPUs. I have a SE440BX but it has craptabulous Crystal Audio. 😒

Some SE440BX2 boards were shipped with a Yamaha DS-XG audio chip (YMF740C)... Mine didn't have the optional audio, so i used a separate Yamaha DS-XG PCI card (YMF724E-V) with an SB-link cable and it was great for Win 95/98 and DOS games 😎. I no longer need it now as i stripped my retro PC and now looking for a decent PIII laptop 😀.

So, I've been going through my box of old motherboards and found one of these AL440LX boards. Seems interesting! Integrated Yamaha YMF715E-S chip, but sadly does NOT have the additional OPL4 chip I've seen in some pictures (rats!) It does have two 2x3 pin blocks marked "WAVE TBL"... which seems odd to me. I have no idea what would connect to these. It is pretty much the same as this board:
http://stason.org/TULARC/pc/motherboards/I/IN … II-AL440LX.html

The board seems to work great. It only supports 66Mhz FSB, so that limits the CPU selection a bit but I bet this would make a pretty flexible retro gaming system with an AGP 2x slot, 4 PCI, 2 ISA AND a very nice integrated Yamaha chip.

Sounds a bit like ISA MIDI-only wavetable cards? - but the discussion there is about an 8-pin header, not 6.

I've got an HP Vectra XU6 that has the 8-pin wavetable connector as well, although it's a PPro. The HP motherboard has a Vibra16 on-board, and the manual says it's for a "wavetable upgrade card"; whether HP actually sold this upgrade card or not is unknown to me. Searches for the ICS or Crystalake card have been fruitless so far.

EDIT: The 6-pin header seems to be a Yamaha-specific wavetable connector - eg page 22 of http://support.rm.com/_rmvirtual/media/downlo … ds/portland.pdf Intriguing! Can anyone shed more light on compatible cards or these connections?

I only really hate it for the fact I can't overclock the FSB much past 66mhz. I reach a freeze by 75mhz.

Klamath core, that's the original, on .35 micron, the better one was Dechutes on .25. There were 300 Mhz Klamath parts, but I think yield of those was very low and as a consequence prices were ridiculous.

Basement full of ancient PC stuff, starting to go through it. Most recently toyed with DOS era stuff 15 years ago, so memory might be rusty. So what's this BitWrangler guy's deal ??? >>> Taming the pile, specs to target? 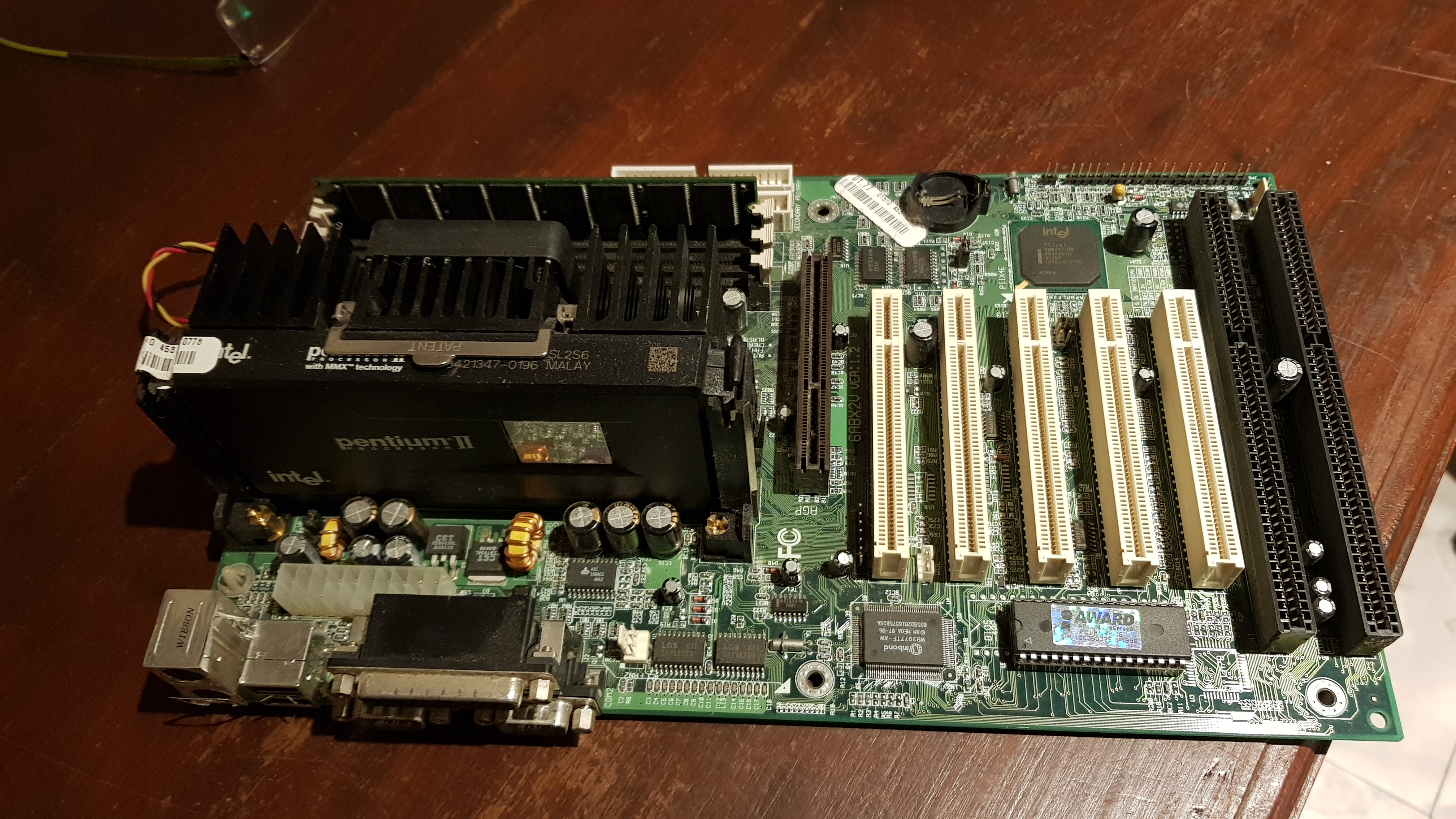 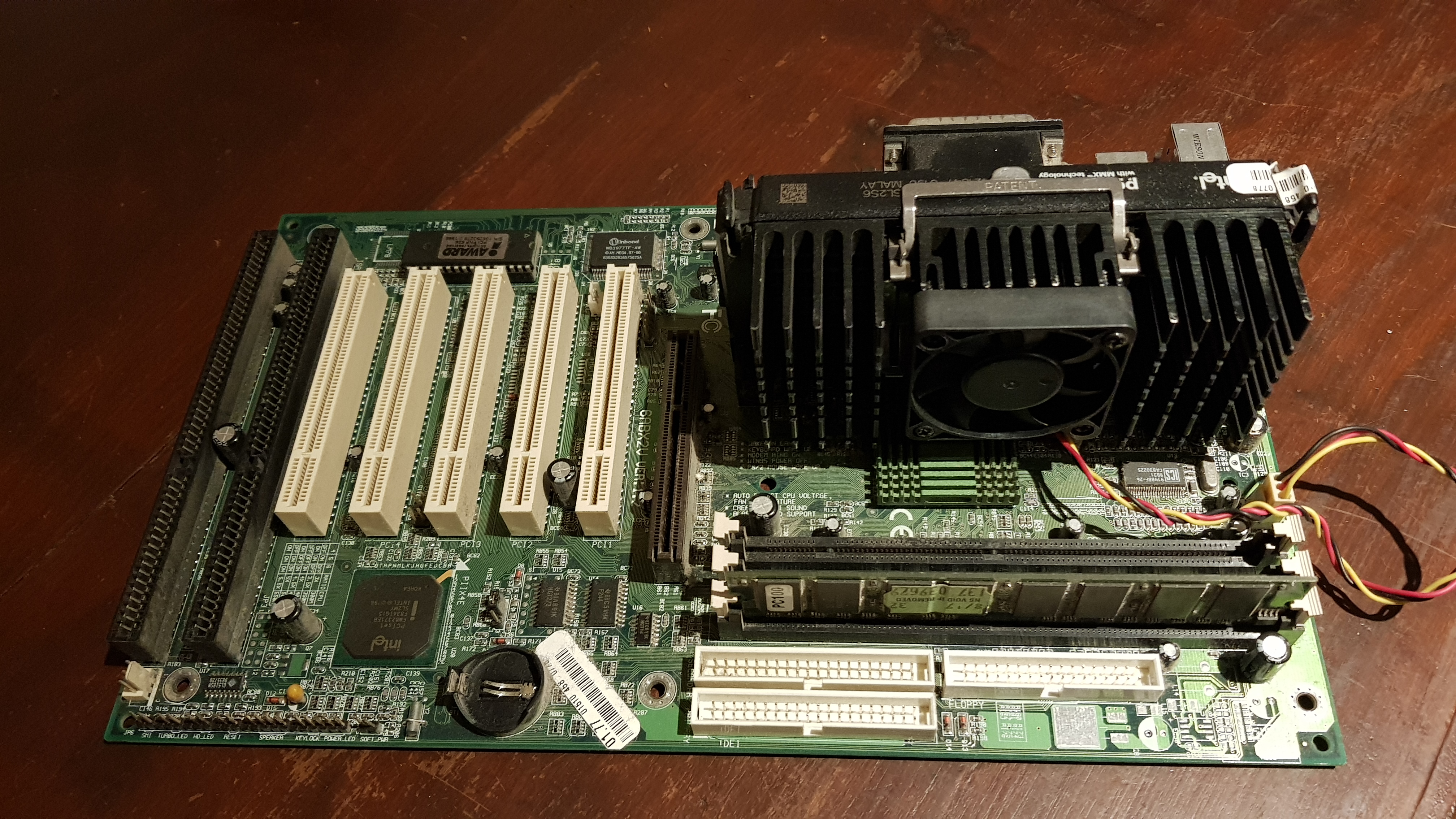 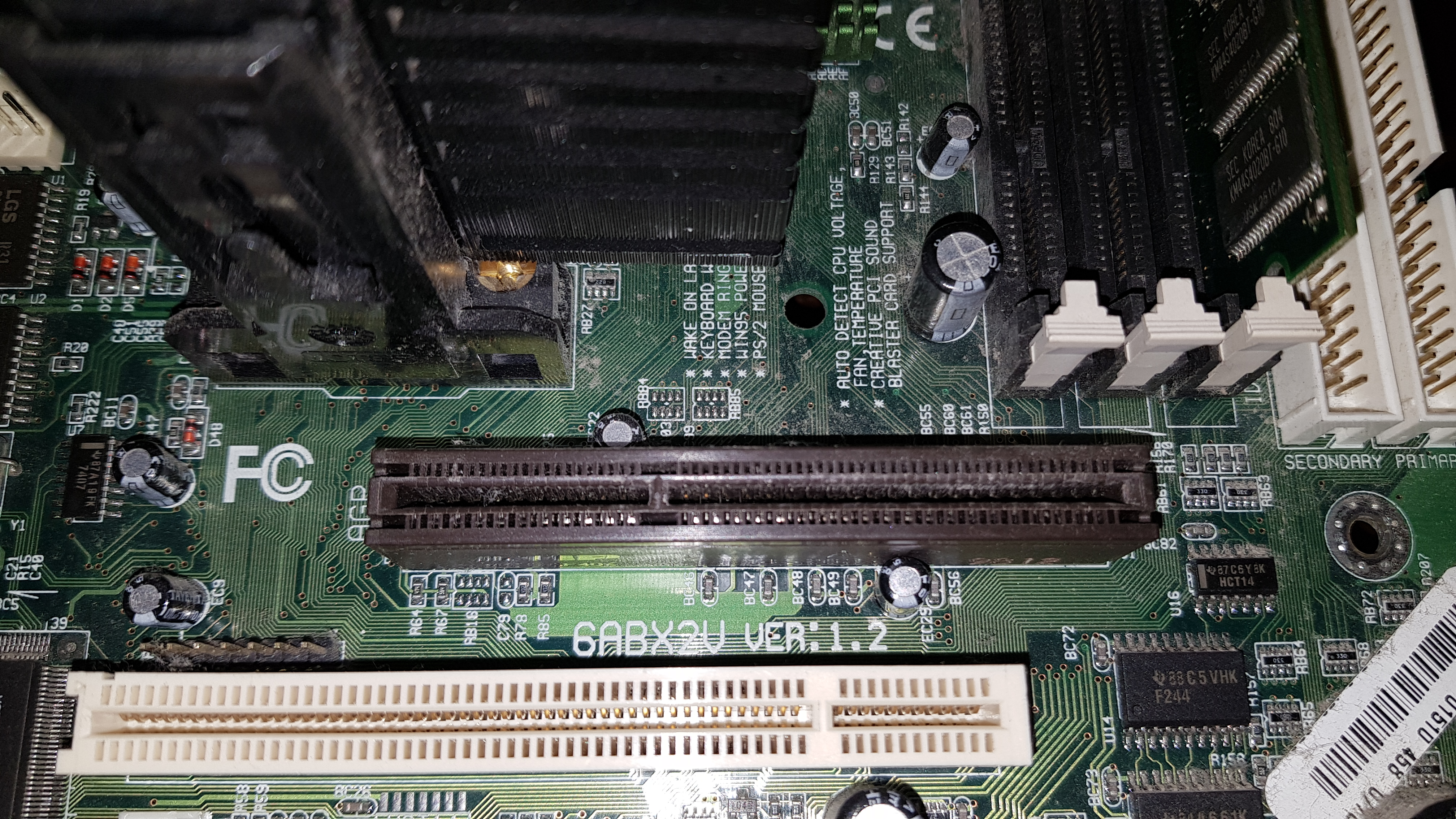 I had one of those 440lx dual cpu motherboard. I used as a personal web server running Sun Solaris x86 edition.
Back in the 1990’s
Dual P2-333mhz.
ATI Xpert 98 AGP video
Onboard SCSI
IBM SCSI drives.
Worked great but it’s a server board with not sleep or power management options.
It’s always on.

I have a INTEL board like your but mine looks like a BX chipset and has a Yamaha sound chip ( looks like the Yamha pci card chip).

Your board and your processor are FSB 100 and therefore the used BX chipset is a good choice.
It's indeed more modern than the LX which is specified for FSB up to 66.

Looks a lot like the stock Intel motherboard Dell used in its XPS D___ lineup, very robust motherboard, though the OEM version lacks the onboard sound.