Heh, maybe, but it sounds somewhat different (and much louder) from when I actually actively use the degauss button, hence my question...
AND, my other monitors does NOT do that (or ANY crt monitor I've ever encountered), power-on degauss I mean... which makes it hard to compare.

So, it'd be just nice to know if this particular model really has a forced degauss on start-up.
(or if it is something else)

Many CRTs do a degauss after being switched on. Search YouTube for CRT degauss sound. It should sound similar.
Often you can also call that via the menu button.

Decided to take some better pictures of this lil' fellow, my LG 702S from 2003. Despite being a mid-to-low end model it still has a dual focus tube (a feature often found on high end CRT monitors)

Only 17 inches but it's still insanely bright for its age, probably hinting that it is a low hour unit which didn't see much use.

Higher end monitors did the degause at power on. So there is nothing to worry about.

I found the monitor locally - around 180km from me. I needed half a year to make the trip as I never go in that direction 🤣

"The shop" is actually my storage place in the attic 😁 Yes, many nice things are there... sometimes I even surprise myself as I forget what I have 🤣

Posted this in the bought today tread already, did not know about this tread.
This Nokia 21" 445Xi will be my main retro monitor now ^^ It also made the biggest degauss sound i ever heard when i fired it up the first time, so i guess that is normal 😀
Unfortunately it got a scratch in the antiglare, i dont know if i will remove it or not yet. Anyone tried using something else as a antiglare replacement? I have read about someone using film used for tinting car windows with good effect (for black levels) but i am a bit skeptical.

AcerView 34e CRT monitor from 1997. 14" (13.1" viewable). Quite a nice monitor to use, works well for classic DOS gaming. The heater is actually visible from outside when the monitor is switched on. Only downfall is that it has a bit of a problem with "CRT bloom". Wish that I could get 1024x768 @ 75Hz but it's not listed as a factory mode and the image goes skewed if I try to display it. Looks as though it possibly was more of a budget monitor at the time, I'm not sure. Doesn't have any sort of OSD, not even a "No Signal" screen. All of the adjustments made are using those "select" and "adjust" buttons. I've seen the exact same set up in other monitors, so perhaps it was a fairly common circuit board that many manufacturers used. All of the relays inside it must be solid state, because I don't hear any "tick" noises coming from the monitor after it degausses or anything. Unfortunately there's no way to manually degauss it by pressing any button combinations or anything, the only way to make it degauss is to disconnect it from power for a few minutes. Oh and yes it was a pain to get a photo of it running, the flicker is real when you try and photograph a CRT.

... Oh and yes it was a pain to get a photo of it running, the flicker is real when you try and photograph a CRT.

Interesting. Always knew it was to do with the refresh rate and shutter speed not lining up and all that but the thought of adjusting the shutter speed on the camera somehow never ctossed my mind. I'll have a play around with my camera's settings. Cheers mate! 😀

At the highest resolution it runs at 60Hz but it was at 75Hz in that photo.

Also have to figure out whether the poor HV regulation is possibly old, possibly dried/leaking caps, or just a bad internal design. My knowledge of HV regulation CRTs only goes so far. :p 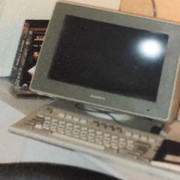 Can anyone please have a look at this and suggest what the brand might have been? It's the monitor I got with my 386 I had back in 1991.

The system wasn't from a main manufacturer, but custom built. All I remember about it is that it was SVGA with 512k of screen memory or something like that?

It looks so similar to an IBM screen that I wondered if it might have been a re-badged model from the same factory or just a design knock-off. I had a mate who suggested it might have been Sampo, or Taxan, but I've googled the hell out of this and can't find an IBM style monitor with a brand name in the centre like that. I've even looked through old PC mags for adverts that might give me a clue. It's driving me mad that I can't remember - considering how many hours I spent staring at the darn thing! 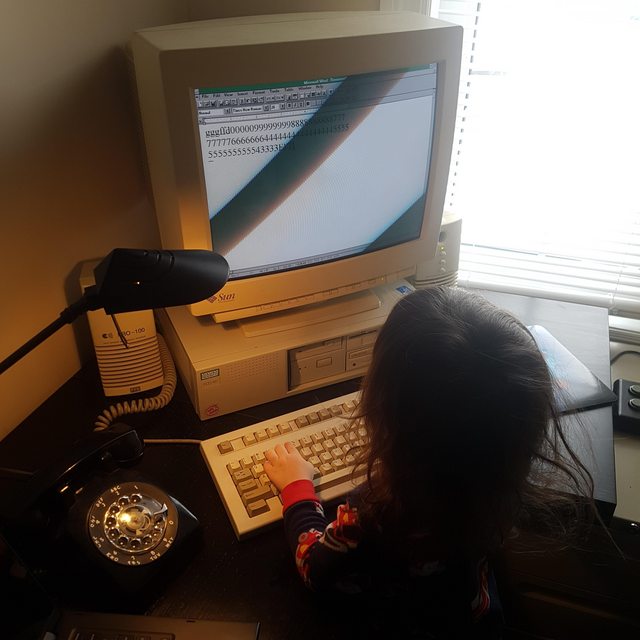 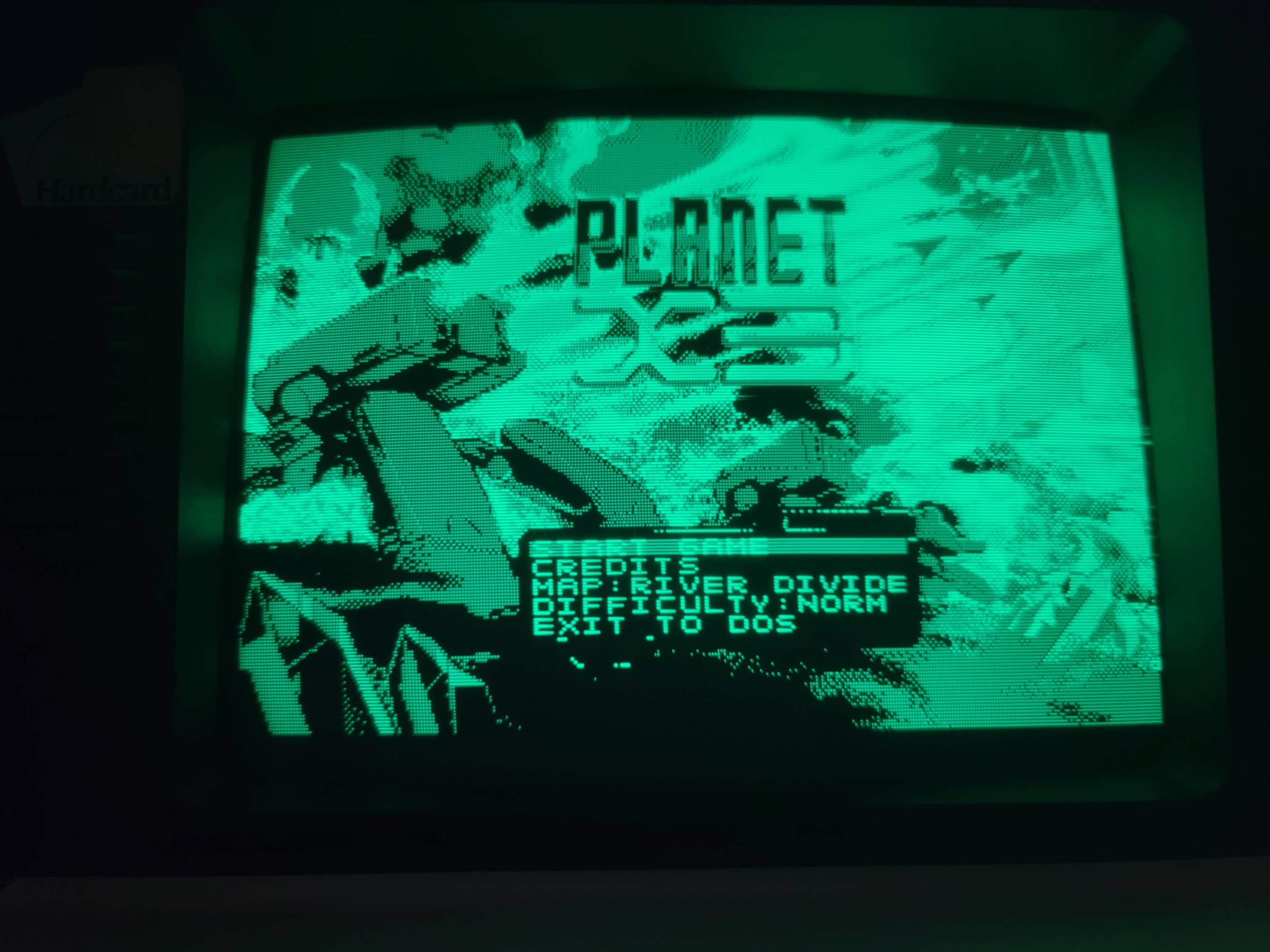 My little Del CRT and the PC it goes with. Have the boxes for both 😀

Recent acquisition SONY CPD-G520 21" with BNC cable. Didn't do much testing (and even cleaning yet) 😉 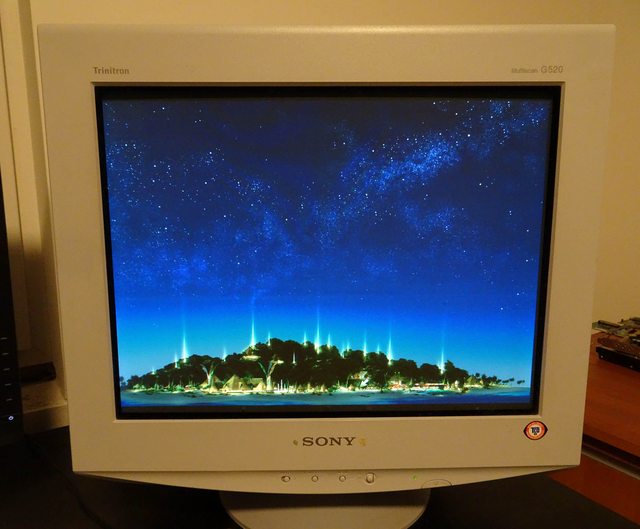 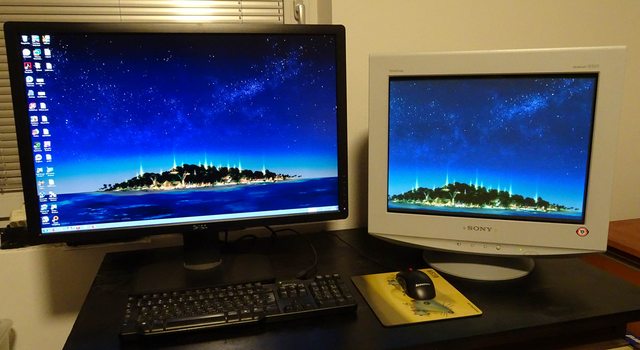 After nearly two years of repairs to get this Philips CM8833-II monitor working again (it took three tries) it is finally back to its former glory! I've carefully adjusted the focus and screen (G2) voltages to get a crisp clear picture when the contrast dial is turned up to max. Such a great CRT deserves to be paired with some awesome 640x200 graphics output from an EGA card:

(Zeliard and Bandit Kings are two of the very few EGA games to take advantage of the 640x200 mode - it's still limited to the regular 16 RGBI colour palette but is 100% compatible with normal CGA monitors.)

The first "retro" CRT I got (as in, when they were considered retro and not just a cheap monitor for when you couldn't afford a flat-screen!) was this Relisys TE-555 15" monitor:

I then got this one for the princely sum of £1. It turns out it's got a problem with the menu though, where it randomly pops on the screen. I wired in a latching switch to the exit button to stop it from coming up, but clearly, a more substantial repair is needed...

Then, I got this one for absolutely gratis from a guy I work with at this computer repair place. It was from an old Sempron PC whose VRM capacitors had all blown on the motherboard, so I'm planning on fixing that up at some point.

It's a Samsung Hitron, I think it's called. Anyway, it's a Trinitron clone from after Sony's patent on Trinitron technology expired. Here, I've got it with my old PS1 as well as an AV switch, which will allow me to plug in other consoles and devices to the TV and switch between them.

My Commodore 1942 dual sync 14” crt, with and without swivel stand

My Sony PVM-9L1 (modded to allow RGB input (consoles only)).

Love this little set and it's worth every penny I paid for this thing back in 2016 and with the RGB mod, it's amazing.

Only monitor I've got now , other ones got sold off.
Found it on the side of the road ages ago , was in surprisingly decent condition and works pretty nice.