Yeah, that’s the way Silicon Valley started with “Start up companies”
People would sleep under there desks in sleeping bags.
Desks ( fold up tables ) with very expensive computers.

And here we are, finally with the new CRT, the RDD can finally be "retro" once again. 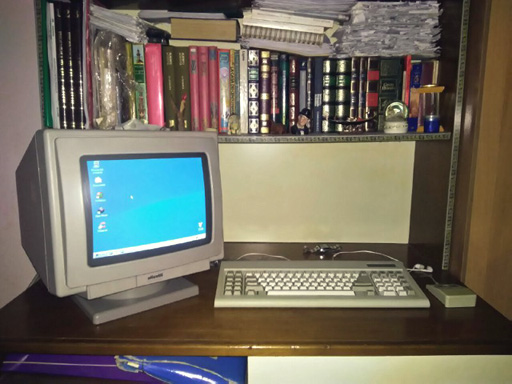 The new monitor is an Olivetti CDU 1458MS/HA71 from 1993, and back then it was one of the high end monitors made by the italian company. It was a quite advanced monitor for its time, since it featured 19 memory states, 9 set at the factory and 10 that were user programmable, allowing the user to adjust and store picture size and position parameters per resolution. Indeed, the monitor automatically adjusts the picture if its settings are stored in memory, kinda like a modern LCD monitor when adjusts itself, that is pretty cool to watch. It also has a seven segments green LED display that shows the memory state the monitor is using at the moment. 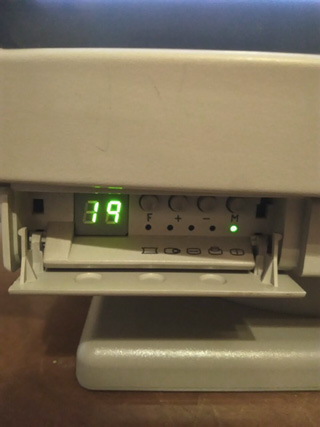 To add some extra flair to the monitor, it was entirely made in Italy, by Hantarex in Florence, and it seems that everything I heard about the top notch quality of their CRTs is true: the picture is razor sharp, Trinitron like I'd say, and the colour fidelity is spot on. I have never seen such a sharp 14" CRT before, so I suspect that the dot pitch might be 0.27 or even 0.26mm, as not even the previous Trust monitor I had, that featured a 0.28mm dot pitch, was as sharp as this Olivetti. As a nice bonus, it also supports 1024x768 at 60Hz and 70Hz without the text looking fuzzy, unlike other monitors of the time. 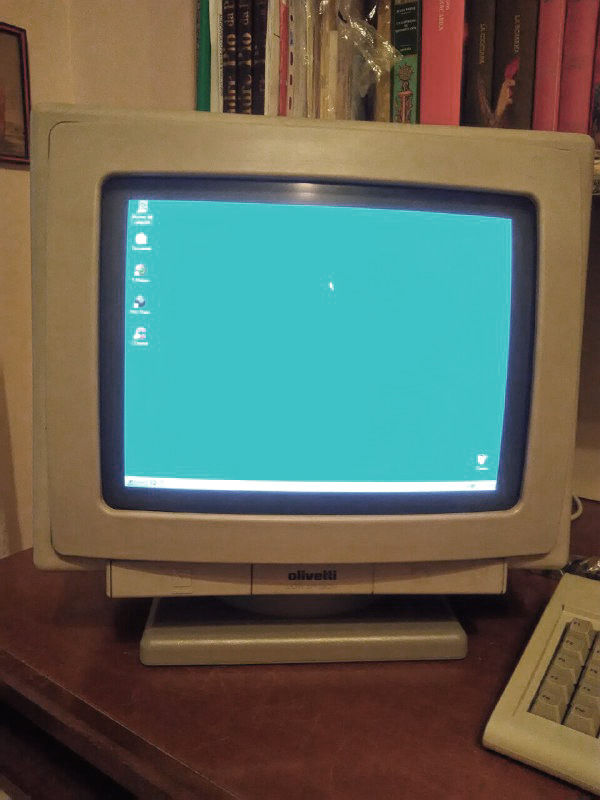 Overall, what to say? It's been definitely a good purchase. This monitor was fully loaded for its times, and came with several features that we take for granted nowadays, but back in the early 90s they were considered features for high end monitors, and Olivetti computers had a reputation for being quality products. The only drawback is that this monitor, just like the Trust I had previously, likes to whine often, and since I'm still young to hear the high pitched squeal of CRT monitors, it makes me crazy, but I'm going to live with it: maybe the situation will get better with time, since the Trust stopped doing that after a month of usage so I'm confident the Olivetti will do the same thing, as it takes time for capacitors and other components to re-energize.

Shall I recommend this monitor to other people? Sure, why not. You'd get a 14" with an excellent colour fidelity, almost Trinitron-esque sharpness, digital control for size, pincushion and position, 10 user programmable memory states to store parameters for custom resolutions, a green LED display that shows the memory state in use at the moment, and an overall 1980s design that makes this Olivetti one of the best 14" monitors I ever tried on the RDD so far.

i miss my crt monitors, though they were heavy as fcuk, though nice and toasty during the winters, ah fcuk

I miss my CRTs. Hearing the coils going when turning them on and, of course, space heaters when the heater broke. The old IBM monitor had issues where the color on the display was pink, but still showed a picture, at least and the other 19" monitor that went up to 1600x1200 stopped working all of a sudden. Still have a CRT Sony PVM-9L1 for my Commodore 64 and some consoles (s-video only works, sadly as the composite BNC doesn't work any longer and could be a cracked or cold solder joint on the board somewhere and a CRT TV/VCR combo.

CRTs are better for older computers and consoles than flat panel displays as they either stretch the picture or doesn't look right. Upscalers are better for me to hook up older consoles, like the SNES/N64/GameCube, Genesis Model 1 (HD Graphics)/Nomad (Genesis Model 2), PS1, and Original Xbox to my 43" TCL Roku 4K UHD HDR TV and have the display set to 4:3 ratio, including the LCD monitors, like my Samsung MultiSync 215BW and other displays that do that, and they will work with text mode (DOS mode/DOS prompt/DOS Box) as well.

I had my first CRT in 2017, it was the Daewoo.
Much better for Terminals in Linux systems, because black is really black.
I used my first CRT in school, it was a Belinea. I liked it. Then in 2017 I bought one, my father said I'm insane.
When I got the iiyama my mother was disappointed because of the size.

Ah, the Olivetti CDU line, I have a Olivetti CRT monitor with the same chasis, but it has a gas spring leg instead, looks truly unique.

It has an excellent picture quality and is multiscan, so behind its 1980s design it has a very advanced technology. Unfortunately mine isn't in the best shape: there's a subtle sign of burn in on the screen, two of the vents on top are broken and you have to keep the cable in a particular way otherwise the red will flicker on and off. I will purchase another one of the same model some day though, as I like this monitor a lot. Wouldn't you mind to share a picture of your Ollie CRT? I'm curious about the gas spring pedestal.

Ah, the Olivetti CDU line, I have a Olivetti CRT monitor with the same chasis, but it has a gas spring leg instead, looks truly unique.

It truly does look unique.... In the sense that it looks like it has an additional bezel around the already existing bezel... like a double case. Makes the screen size look small compared to the whole size. Very weird/unique design.

It definitely does. The actual monitor is a 13" rather than a 14", or at least it is much smaller than the other 14" monitors I had previously. The tube was manufactured by Hantarex and the monitor itself was made in Italy, in Florence. The design dates back to the mid 1980s, as it was originally introduced with the M240, the successor of the M24. They kept sticking to that design until the mid 1990s, so it wouldn't look out of place on a 286 either. 😉

Sorry for the delay, that monitor is currently stored in the attic, with the rest of the CRT stuff, I had some difficulties reaching it, as path to the storage was cluttered up. Visually it's in perfect condition, but when I powered it on the last time, it couldn't fully fill display @ 1024x768 resolution, not to mention 1152x864 res. My brother used it as a main monitor up to ~2003, because of the nice picture quality in higher resolutions. Since then it was rarely used and it eventually ended up in the attic around year ~2007.

I'll pull it out for restoration, sooner or later though 😉

Looks fab! I wonder if this one has the digital controls hidden under the trapdoor on the front of the monitor. Mine works up to 1280x1024 @60Hz, I have to check if it works at 1152x864 though. Olivetti in-house monitors are excellent in terms of build and picture quality, can't speak for the outsourced models, as I never used them.

It uses only potentiometers for H/V width, height and position controls under the trapdoor, didn't notice that your monitor has digital controls for that, quite advanced stuff for such an old monitor.

This monitor cannot properly display resolutions above 800x600 at this moment, anything higher than that, results in horizontally squashed raster. It's possible to stretch it out, by increasing B+ supply voltage for the HOT and by adjusting horizontal width control coil, but then other resolution modes, that were previously OK, gets distorted horribly. The problem most likely lies in the resolution mode selection circuitry. I know for a fact, that this monitor supports 1024x768 properly, because it was used at that res. all the time.

Try to run it at 1024x768 at 43Hz interlaced. Perhaps that one is the ideal refresh rate for the monitor at that resolution.

Try to run it at 1024x768 at 43Hz interlaced. Perhaps that one is the ideal refresh rate for the monitor at that resolution.

It's a lot of fun seeing all the different setups. Bought this CRT many, many years ago but I can't find anymore, where I got it from or how much I paid for it. but it was probably quite cheap.

Haven't used it once, but in theory, is this a good monitor or should I throw it out?

I have a Dell 19" Trinitron out in the garage under a cover just in case.

The IBM P97 is still doing a sterling job though. I wont be getting another crt though because I'm getting older and the damn things weigh a ton. Also LCDs are a lot better quality than they use to be and consume a lot less power. The Transonic LCD 15.6" TV I bought a few months ago for $10 with all those video inputs is a gem of a thing.

It's light, compact and crystal clear.

Shrinkwrap is a good idea for long term storage of these things. It keeps water and bugs out. A dustcloth is not enough.

It's been under that cloth for years. Shrink wrap doesn't allow the components to breath. Having had to deal with aircraft using shrink wrapping for long term storage I have got a fair idea. Why are a/c stored in the desert for goodness sake?