I have three main builds currently in my service. One for Windows 10, one for Win 7, and one for Xp. I have parts to do probably 3-4 Windows 98 era setups too, but I have been space restricted as of late in my general pc area, and as my game room is already way overflowing with old console stuff just cant spare the space. Anyway, main builds are as follows:

Honestly my Q9650 build is still quite capable of modern pc gaming in general, but mainly I use it for Dawn of War II and other RTS stuff for the most part. Hell, even the Xeon build could be a modern gaming box if I stuck my GTX 660 in it and upped the ram to 8gb, but I like having a XP system up and running. The FX-8350 system is my main workhorse and what I use for most of my non-RTS related gaming.

Current system has been in use since Jan '13, with a few recent upgrades. Moved into a flat with with girlfriend (now wife) and needed something I could hide in a small desk cupboard, with monitor wall mounted and wireless input devices. Haven't bought any new games in years and this plays everything I own on Steam at 1080p max settings. Next upgrade will probably be a 4K monitor at some point. Don't see me going back to a full sized system.

Was aiming for a minimalist appearance. Have since reverted to 2.1 speakers on grounds of audio quality.

Also have a dual core Celeron/H61/8gb/128gb SSD ITX system strapped to the back of my TV for HTPC purposes using memory and storage left over from previous upgrades. Daily driver at work is a Thinkpad X1 Carbon.

Now that we have a house with loft space I'm rescuing what remains of my older PCs from my parents loft, so I can use old games, software and gadgets on roughly period correct hardware, but this is the wrong thread for that.

So, this is my current machine, upgraded at the beginning of this year.

I'm quite happy with it, especially with final cable management (although I did change that few time until I was really satisfied), and performance it's also great, even with latest games in FullHD. Oh, and the silence, that is just amazing, its just so great, what can be achieved with current parts these days.

So, here is some pictures, how it looks like in real life: 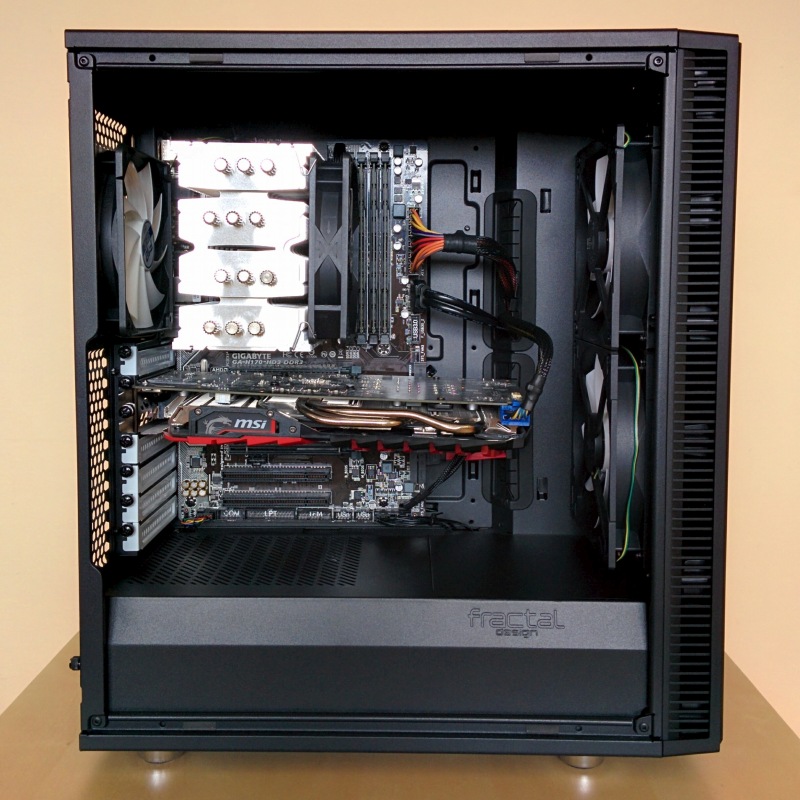 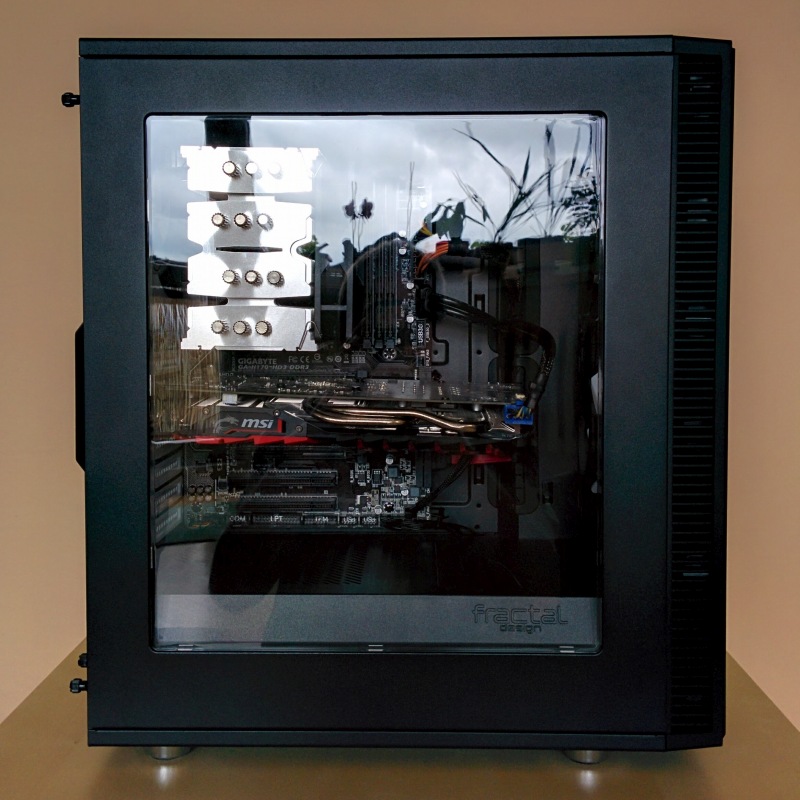 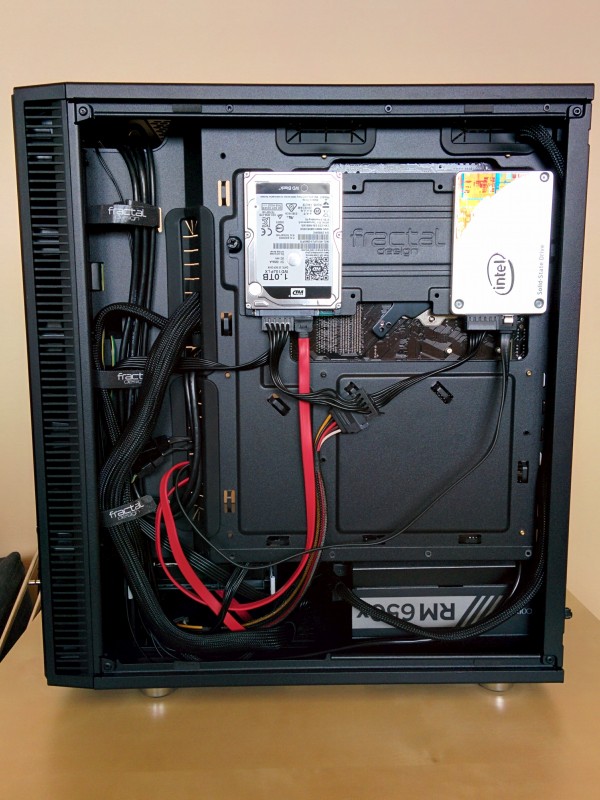 You might want to seriously consider propping up the end of that gpu with something.. anything.. that already has terrible GPU sag, almost the whole PCB on the video card looks warped already. I might would fear for the pcie socket health over time with that, if it was my computer. I ended up propping up the end of my 1080 Ti with a chopped off bit of wooden ruler myself, and mine wasn't even sagging as bad as yours is.

I wouldn't be keeping that PC in that cabinet if I were you. I don't see any vents and it looks like it could overheat.

Just so ya know, PCIE slot damage is actually a serious concern due to excessive gpu sag. I had a HD4890 that was worse than what we see above in this thread, and I had a "Slightly deformed" PCIE slot after just one year of use. Not quite as bad as below because I caught it and supported it on the far end before it got bad.

But this is certainly a possibility if left unchecked over time (years): 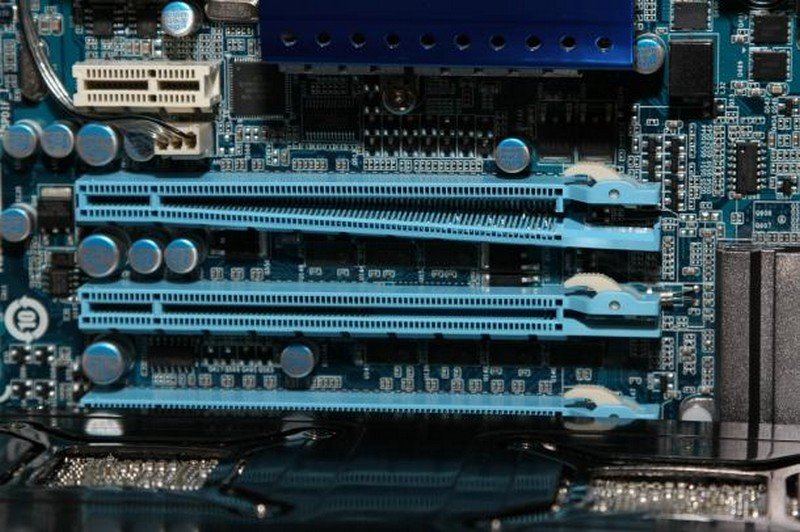 New case and power supply! My old PSU was ~7 years old (500w) and I had some home-made adapters to connect additional SATA drives, so it was time for an upgrade. Also got to finally fix the horrible cable management in my old case. Got the new one for 40 Canadian pesos. You might want to seriously consider propping up the end of that gpu with something.. anything.. that already has terrible GPU sag, almost the whole PCB on the video card looks warped already.

Yeah, its like this from day one. I do have a wooden skewer as a support 😁 I just didn't include it in photo, that's all.

You might want to seriously consider propping up the end of that gpu with something.. anything.. that already has terrible GPU sag, almost the whole PCB on the video card looks warped already.

Yeah, its like this from day one. I do have a wooden skewer as a support 😁 I just didn't include it in photo, that's all.

Yeah I cut off about 10" of a wooden yard stick and wedge it under the corner of my 1080 Ti for the same reason. I just wanted to mention it so at least you do something.

Fast as I'll need for the next few years probably. Also, here's a UserBenchmark run.

So my 3770K system up and died a few months back. The motherboard decided it was going to fry every chip that was placed in it. And I was an idiot and did my diagnosis wrong and in the process fried both an i3, and a celeron in that socket before I realized it was the motherboard was the problem killing chips. Anyway, long story short I scrapped it and upgraded anyway.

I posted sort of a few images of the new video card before but didn't quite outline new system yet.

Current system as it is now: 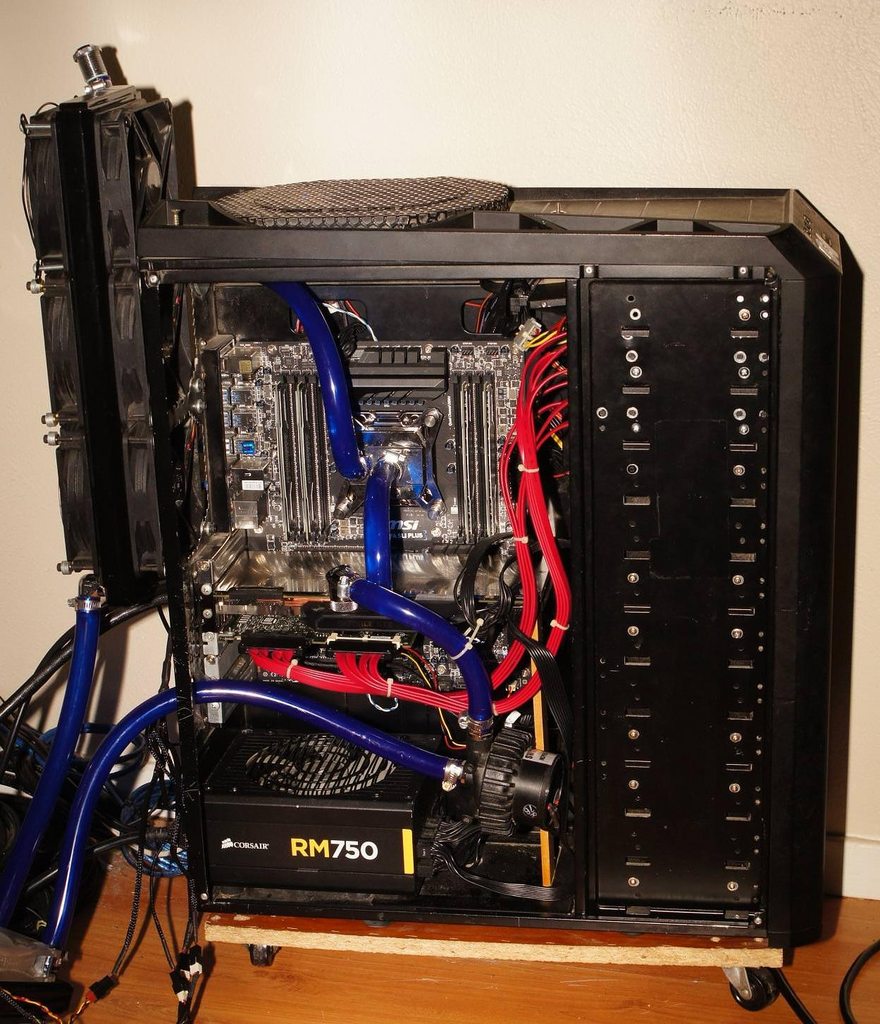 Not the prettiest thing in the world.. but it works. I've been thinking about converting it to two radiators with something like a Fractal R5 in the future maybe. For now.. functionality over aesthetics. When I get the rest of the $350 on the credit card paid off in a few months maybe think of finally retiring this case.

Also that's an old picture.. couple days ago I swapped this old corsair power supply (came to me broken, I had to direct-wire the fan to get it to work again.. not ideal.. scary.. automatic thermal management for fan didn't work..) with a brand new EVGA SuperNova P2 850W just recently and haven't taken a new photo yet.

Just got a hold of a X79 motherboard yesterday (definitely NOT selling this one) and upgraded my current PC. I also got a hold of some other goodies for black friday - namely a well ventilated, good looking (in my opinion) cheap, compact ATX case (Segotep Halo 5) and a 240mm water cooler really cheap, as well as a motherboard for my upcoming ryzen build (MSI x370 Gaming) - but for now I'll settle for upgrading my aging i5 build. I replaced the whole machine sans SSD and disk drives with the Asus P9X79 board I just got, a i7 3930k I had laying around in my collection and stuck in all the ram I had. Here's the result: I did paint the interior of the case white so the components will be easyer to see, and I also painted the edge of the cases plastic front panel red (it was a bit bland for my taste). The AIO cooler's fans were mounted on top of the case due to one of the Asus P9X79's design quirks - the VRM radiator and 8 pin CPU power plugs block one of the fans for the cooler when installed on the top of the case. It looks a bit odd, but It grew on me - and I didn't want to install the water cooler on the front because it would either be blowing hot air from the CPU to the video card and PSU, or it would be competing with them for air if I made the fans blow outside of the case.

The trusty Lynfield i5 I've been relaying on for gaming for the last 3-4 months will serve as an XP gaming PC and it will dual boot XP and windows 10. I moved it into a tiny mATX tower case, and replaced the GTX 1070 (witch I gave to my sister) for a MSI R9 280x. I still need to get an SDD and some decent 4/8GB of DDR3 ram for it.

Been rather inactive here lately due other stuff at home and money was being sunk in my modern pc. Even missed jade falcon his "sudden departure". Anyhow been busy on my modern pc and that I due for an update on it.

Not much has changed in hardware but it certainly looks quite a bit different then the last time 😎
I had trouble not to go overboard with the lighting, but kept it "civil" in the end imo.

The daily, built mostly from used scrap although recently has accumilated a few new shiny parts thanks to Maplin's going under in the UK 😢

Mainboard: Gigabyte GA-G41M LGA775
CPU: C2Q Q8400 @ 2.66ghz
Cooler: Coolermaster MasterLiquid 120 AIO (previously ARTIC Freezer 11LP)
Aux Fans: ARTIC PWM-PST (2x80mm and 1x120mm)
Ram: Hynix 2x4gb DDR3-1066
GPU: Nvidia GT710 1gb (soon to be replaced by GTX650)
Drives: 120Gb WD Green SSD & 1Tb WD Black HDD
Case: AVP Hyperion budget thing...
Was originally a Silverstone SUGO SG12, but the build quality was awful for such a highend case. I actually got the AVP for my skt370 build (as it was only £20 new) but i ended up moving all this into it as its just packaged so much better, especially with the watercooling setup.

More for work than gaming but stuff runs ok in wine and retro gaming with the capture card + switch + whatever retro machines are hooked up.