This motherboard came as a server from my first job. Originally it had a single P2 400 in a full tower case complete with hot plug redundant power supply.
It had already been decommissioned by the time I statred in around 2002 and was called migrate as it had a key role when changeing from Netware to a Windows 2000 only network.

Around 2003 it was brought back to life as the test server for the WebDev till around 2005 after a major network upgrade. I got this about 10 Compaq Deskrpro 2000 /4000's a few P3 class Compaqs a P2 400 Xeon work station and a HP SCSI CD tower and 2 IBM P2 class PC's
The Workstation died not long after getting it and I disposed of the rest in a big clear out in 2011 JUST before getting back into old PC's including a Wang 386 😢

I kept the CD tower and this server, both are increadably heavy so for now just brougt the motherboard over with my 1st PC the osborne in another post.

For now I've put it in a spare case. Its a nice case but nothing specail. 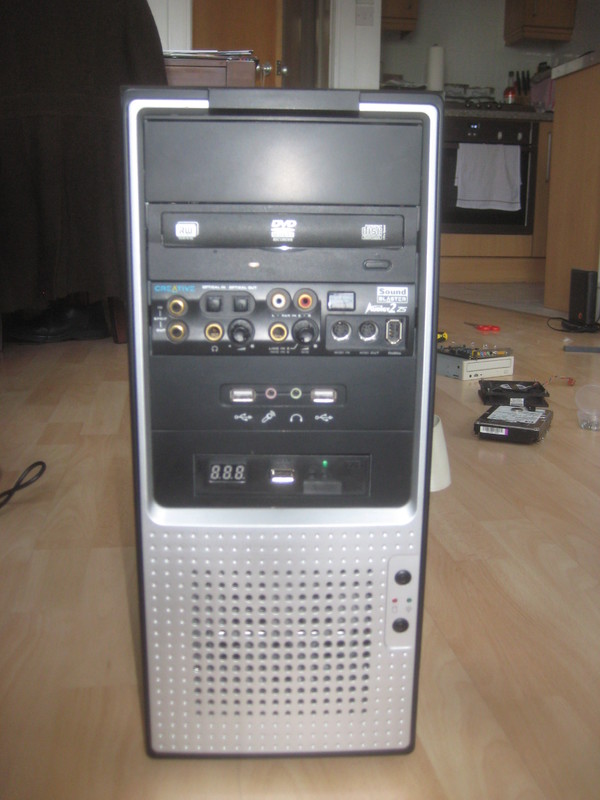 As you can see its very full inside! 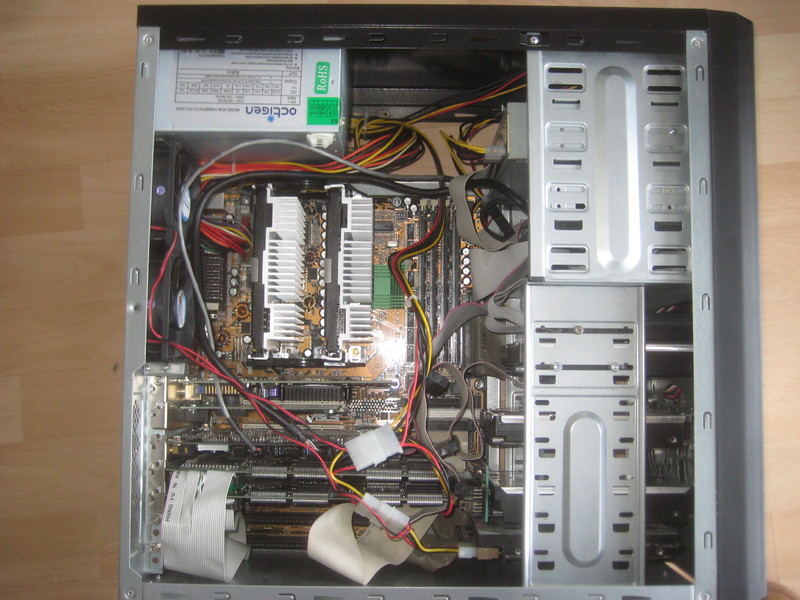 Currantly it consists of.
M/B Asus P2B-DS Rev 1.03 (The Pezo speaker broke on the trip from Australia to UK, glad thats all it was)
2x P3 600 Katmai's, Sadly Rev 1.03 can only support Katmai's without modifying the onboard VRM's which is well beyond my skills
Asus AGPV7100 (T) GeForce 2 MX, This replaced my TNT 16MB many years ago and was the first upgrade card I ever got so want to use it somewhere.
3x 9.1 Compaq SCSI HDD's Pulled from my Prolient 1600, Got a SCA 80 Pin converter just to check it works, which it does just waiting on the others now.
and
4x Kingston KVR133X72C3/256 ECC ram. However I only get 512MB ram total, I got this ram new around 2005 whcih wasnt cheap, cant remember if I made the mistake or Kingston rams configurator got it wrong, but never got round to sending it back. I'll look to upgrading to the full 1GB down the track.

Everything else I havent decided on yet. I've got a Antec 3000 case not being used that I'm going to move everything into few weeks later and decide then. at the moment I'm thinking of duel booting 98/2k and leave the V2 SLI kind of 2 cpu, 2 Voodoo card setup. even though they make more sence in my P3 1Ghz (although that lives in a different house)

This looks like a kickass system and dual booting Win 2k and 98 seems the right thing to do.
512 MB should be enough as long as you stay away from Windows XP SP3 but I understand the urge to max the memory 😁

Is there an Audigy 2 ZS in there? Or is the front-bay just in the case?

It's in the second PCI slot. If you look carefully you can spot the black cable that connects to the drive bay thing.

I like old SMP machines, gives them a rather lofty feel to them even if the SMP function isnt the most useful for a retro enthusiast in most cases.

one thing I would do though is maybe get a different GPU , like a Geforce 1 or 2 , 2MX can be a bit anaemic at times

Lofty but useless, I think that sums them up quite well.

Currently I'm living with the soon to be Mrs so this PC will be my Dos games that don't work on my 486 and 9x/Glade games that Don't like XP. Which keeps me to my 3 PC limit in her flat.
I've already stolen the Voodoo's and the Audigy 2 + Drive bay from a P3 1Ghz PC at my place, I may grab the GF Ti4600 from the same PC as it wont be used till later next year at the earliest. Rekon after then the GF2MX will go back in, I like how they are both Asus and both the same colour, Important stuff I know!
The 1GB of Ram is 100% just to max the thing out, I doubt I'll ever need the 512 I have now.
I still haven't picked up the Antec case which is a shame as that has a power supply with more power connectors. I got the rest of the SCA 80 Pin converters for the other HDD's but nothing to power them.

And I think that Katmai CPU even more preferred for dual board, since SMP systems
very sensitive to cache size

The problem is Katmai's cache is slower, which may be worse depending on the situation.

A case packed full of obsolete and useless hardware! I like it! 😀

Oi its not useless! its just not very practical 😉
Re the heat, I haven't really used the PC much and the side panel is off and everything is ok for now but definitely don't like the setup.

Is that sli cable made from a floppy cable?

Oi its not useless! its just not very practical 😉.

You know what I meant, right? 😉

Oi its not useless! its just not very practical 😉.

You know what I meant, right? 😉

Nice setup! I like the P2B-DS!
It's also cool that the board has a story 😀

What I would change:

Sorry Nahkri, didn't see your post before. Yeh had to do the floppy cable hack as both cards were 2nd hand and neither came with a sli cable. I'll trim it down one of these days.

Glad to see most people like it. Fingers crossed I can pick up the actual case I want to use this weekend and set everything up properly

It might still support Coppermines, depending what VRM regulator chips it has installed (I'm assuming there's 1 for each CPU, not shared).
Many P2B boards have Coppermine capable VRMs even prior to the revisions that officially supported them. It was just a matter of luck, up until the revisions where such support became official and guaranteed.