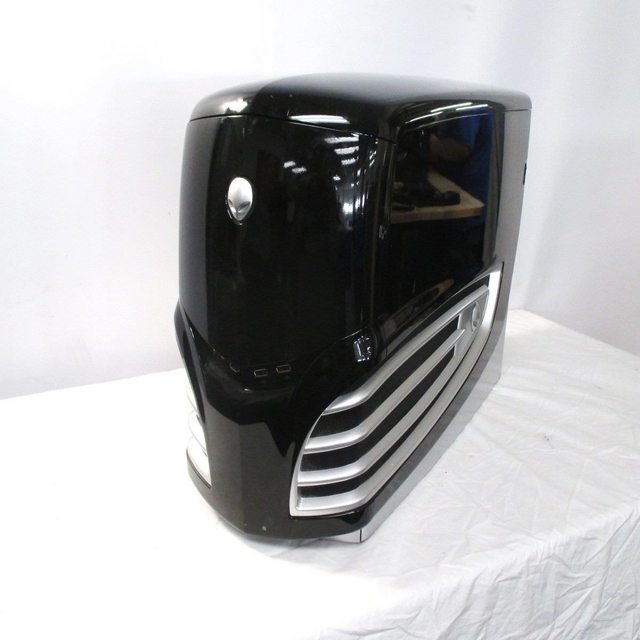 After picking it up the case seems to have a couple of scratches that I don't think will buff out. 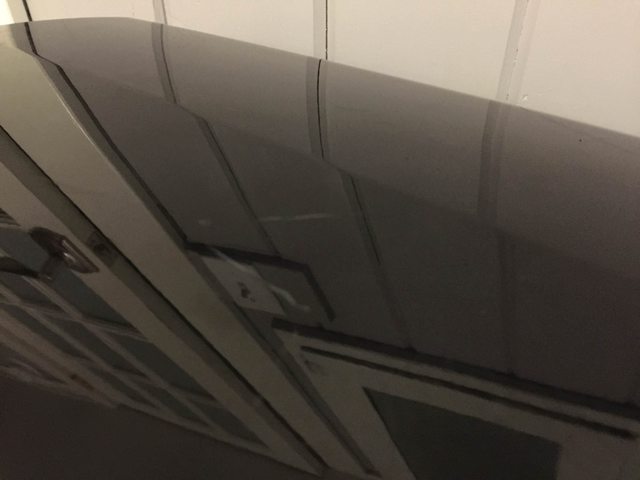 For now I'm thinking keeping the case original, but perhaps it is worth eventually repainting - either attempting an original look or custom colorway.

Overall I'm pretty impressed with the case quality. I also found its really hard to find good information on this case because Alienware has reused the name. It took me awhile to figure out how to open it properly, but it requires no tools to open. There is a switch on the side that allows you to pull it off. It is a bit finicky getting the doors back on, but seems to get easier with practice. The main trick seemed to be knowing where the latch is, and activating the latch when putting it back on.

Despite the fact there is no window they did some cable management to try to make the internals less of a mess: 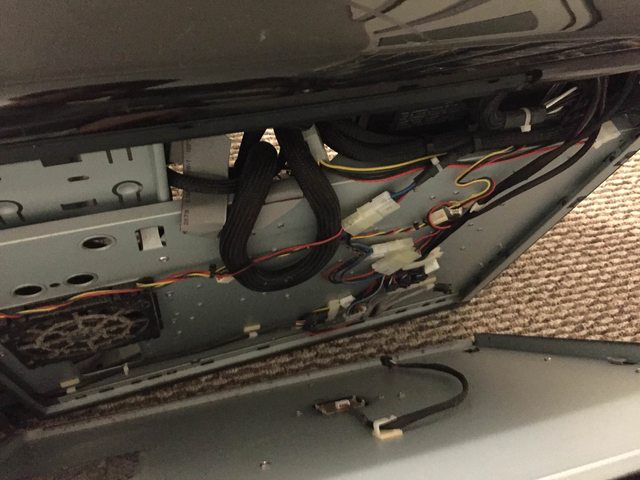 It also includes a board specifically for managing the LEDs: 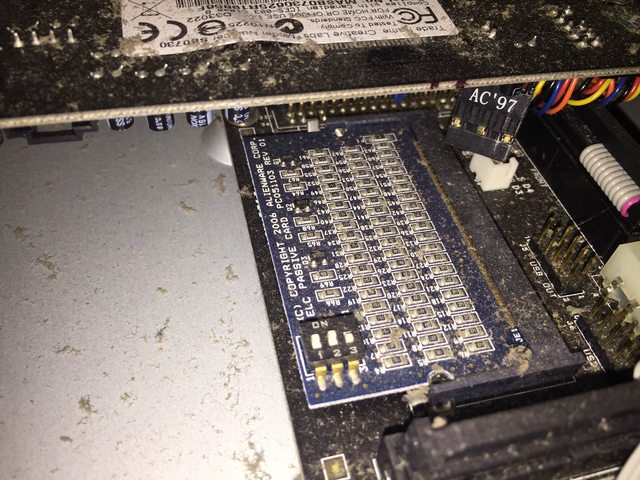 I also thought it was interesting a fan on one door is powered by contact between two boards: 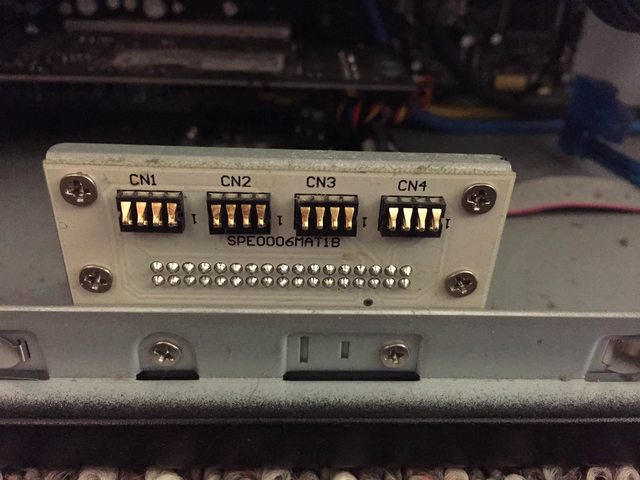 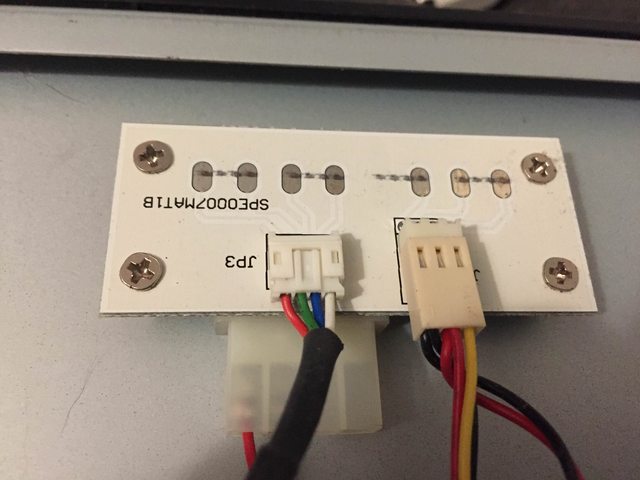 I tried to identify the parts: 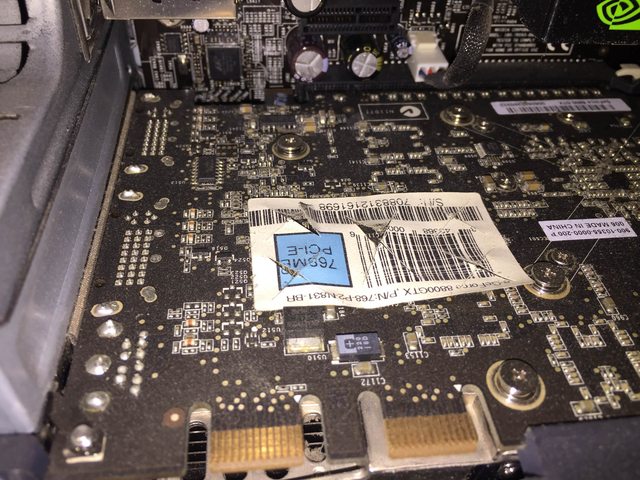 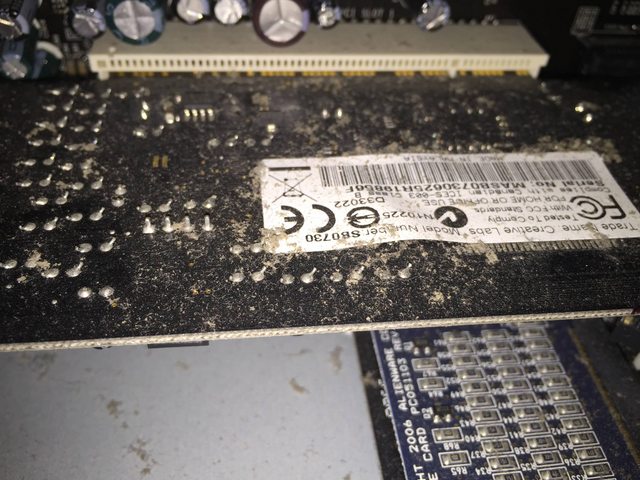 Memory - Patriot 4GB DDR2? I could get a good picture. They are the first sticks with heatsinks I've gotten.

CPU - Core 2 Quad @ 2.67 Ghz. I didn't want to pull off the heatsink yet, and I think I have a hunch I'll be able to upgrade this anyways. I found it interesting the heatsink seems to be passive with no fan. I think this is a Core 2 Quad Q6700 based off the Goodwill specs provided. 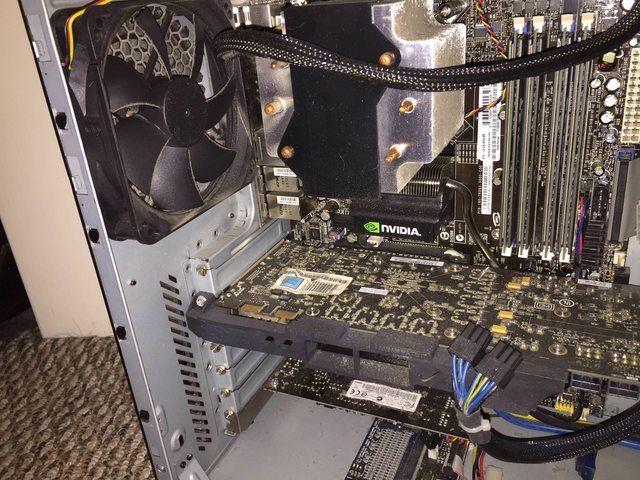 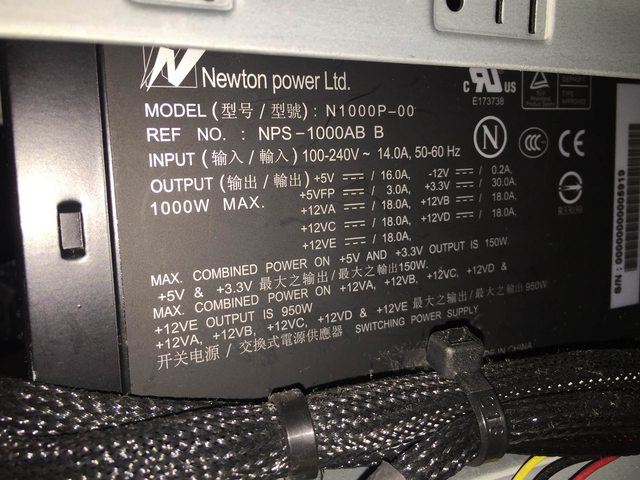 Currently this build is in the research phase. I feel like this was worth my money so far, especially if I can get the video card to work. I'm hoping the LEDs all still work, and ideally I'd like to keep them working. If anyone has any ideas or suggestions I'd love to hear them, but otherwise I'll update once I have a more concrete plan.

CPU - Core 2 Quad @ 2.67 Ghz. I didn't want to pull off the heatsink yet, and I think I have a hunch I'll be able to upgrade this anyways. I found it interesting the heatsink seems to be passive with no fan.

Motherboard - Evga? 680i SLI motherboard. I don't see the Evga branding, but it appears to be identical. I do see nForce 680i on the motherboard.

I believe I've seen that CPU HSF before; it does indeed have a fan. The heatsink part should be composed of two "towers" that straddle a ~92mm fan between them, which pulls air through one of the "towers" and pushes it through the other. It should be possible to remove that piece of black plastic on top of the HSF to get access to the fan inside.

Nvidia produced reference-design motherboards with its chipsets back in the day, allowing its traditional GPU partners to suddenly become motherboard makers, and this practice also extended to the 680i. EVGA and BFG and perhaps others sold 680i boards based on this reference design, which I believe also was adopted in various OEM pre-built machines. Thus they should all share the same basic physical layout and be compatible with the same driver packages, though I'm not sure if BIOS updates are also interchangeable.

I believe the motherboard is the Nvidia board here: https://www.nvidia.com/object/designed_by_nvi … a_680i_sli.html

Windows XP
GTX 560 Ti SLI - 2 PCIe 16x - From what I can find this seems to work in XP and would also give access up to DIrectX 11 if I added another OS on top. It may be bottlenecked by CPU and RAM so may not be worth it.
Dedicated PhysX Card?
Creative Sound Blaster X-Fi Titanium Fatal1ty Professional - PCI Express x1

Not sure what to put in drive slots - could go for I/O box, but I don’t think I’d use it

Have a PCIe and PCIe x8, one of which I believe could be used for dedicated PhysX

I'm thinking start by replacing the power supply, then perhaps move on to upgrading the RAM and/or Video card as needed.

Lovely! Nice find... should be able to find that power cord cheap online.

Lovely! Nice find... should be able to find that power cord cheap online.

I'm trying to decide if I should do that or just replace the power supply completely. I think I'm going to wait till Friday to see if I can find one at the e-cycler's before buying online.

I got the cord I needed and was able to power it up. Unfortunately video is scrambled, but the good news is all the LEDs seem to work. 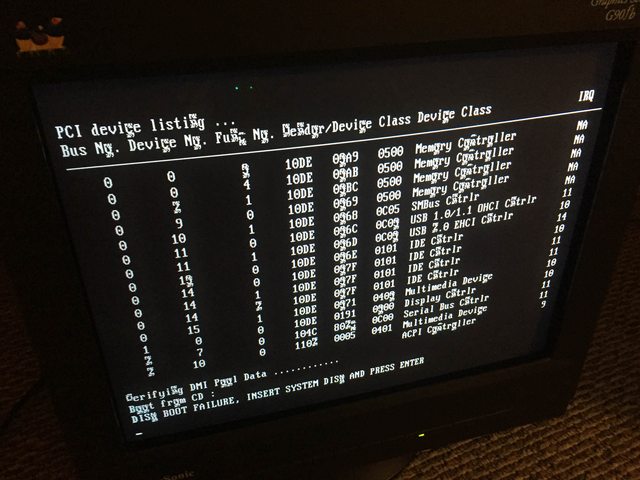 I'm a little nervous though that when I plugged the card into the second slot it seemed to come up with a slightly different result. Perhaps its just that I'm not familiar enough with SLI. 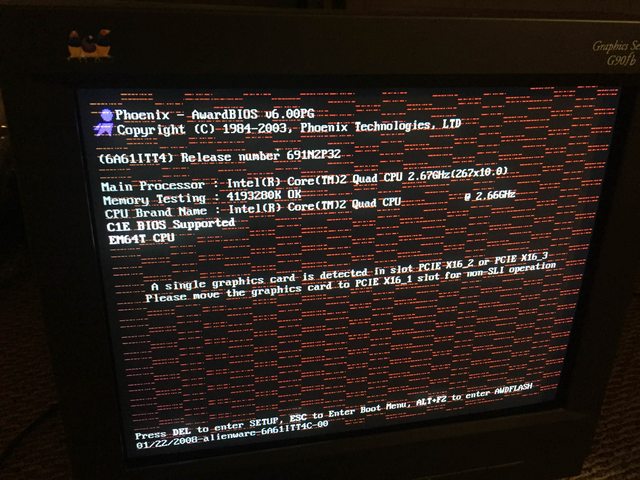 I saw a GTX 580 at the e-cycler today that came with a warranty, and I found an XP driver for it. I'm considering going and getting it tomorrow to try to get it up and running.

Definitely try a different GPU, see if it works. You don't have any spare PCIe video cards?

I don't unfortunately. I've been using laptops since 2008. I also didn't have a DVI cable or monitor, so I got a converter from the e-cycler for VGA to use the CRTs I have. Need to start somewhere and fortunately I'm the type that loves digging at the e-cycling places and Goodwill. One of the things I find really exciting about getting into working on older computers is it seems like I have a lot of opportunity to learn and experiment. To be honest my motivation with this thread is to try to keep me actively working on the project, and perhaps get feedback on thoughts that would otherwise just be in my head.

I managed to get a GTX 580 Ultra Classified with 3GB GDDR5 instead of the 1.5GB GDDR5 I saw, so I'm waiting on that in the mail now. It might be overkill for this system, however there is an XP driver and it seemed I could expand to dual SLI in XP. I thought it was worth playing with even if I eventually switch out the motherboard.

I should practice what I preach too and just keep a spare PCIe video card around... it always comes in handy.

So I managed to get two GTX 580 Ultra Classifieds to attempt SLI with.

The first problem was trying to get it to fit inside the case. It wasn't that the card wouldn't physically fit in the slot, but rather the bracket wasn't cooperating with the slot and preventing it from sliding in. I wanted to at least try to see if the cards worked, so I figured out how to unscrew the bracket with a screwdriver and socket bit. Once I got them both in I realized something was missing. The GTX 580 Ultra classified requires a 6-pin PCIe power and two 8 pin PCIe power connectors. This means for SLI I would need two 6-pin and four 8-pin. The N1000P-00 power supply that came with the case has four 6-pin power connectors and ZERO 8 pin PCIe power connectors.

So now I'm trying to research power supplies and their connectors. I'm hoping I will be able to find a modular power supply that will easily connect with all the components - including the LEDs.

I'm curious why the bracket for the card didn't seem to fit. I'm wondering if this means newer cards assume larger expansion ports are available, or if should unscrew the bracket and reattach it after the card is inserted.