I'm currently part way through another, more boring, project but I have a hankering to put together an XP PC and I could finish off this list... still got all the games I need...

What about stuff like Star Wars: The arcade game, F/A-18 Interceptor, Death Track, Mechwarrior 1 and Red Baron? Do those count as FPS? They're 3D, first person and you shoot things. I would think especially if you include flight sims you could dig up lots of first person shooters from the 80s. Hell, I bet even C64 has a few.

I was following this thread with interest, but the fact that you panned ROTT (ok, some fair criticisms to be made there), panned Descent (are you kidding?), praised Duke3D instead (SNORE), called the music in Unreal "forgettable" (what the ACTUAL fuck) and played Quake without the music means we're looking for completely different things in these games. I'll still read 'em if you make more, but I'm not gonna agree with you in principle. 😜

what about Catacomb Abyss games?

My thought exactly, this (and Catacomb 3-D) should be the starting point of this project as long as the title contains the word "history"...

Why not just start with Hovertank, then? Wolf3d is as good a starting point as any, imho.

Hover tank is the first MSDOS game With the FPS perspective but good luck finding it anywhere, I’ve been looking for years.

Hover tank is the first MSDOS game With the FPS perspective but good luck finding it anywhere, I’ve been looking for years.

Not even close! Here's one from 1987 (in an engine that has more in common with Quake than HT3D/Wolf3D nonetheless.)
The FPS genre has existed since the '70s and has been on home PCs as long as they've been around.

I think it's fair to say though that Doom was the first to create a truly immersive 3d experience with a sense of height as well as depth. And Quake may have been the first texture mapped polygonal 3d game that supported hardware acceleration. The is a reason they are remembered as genre defining milestones. 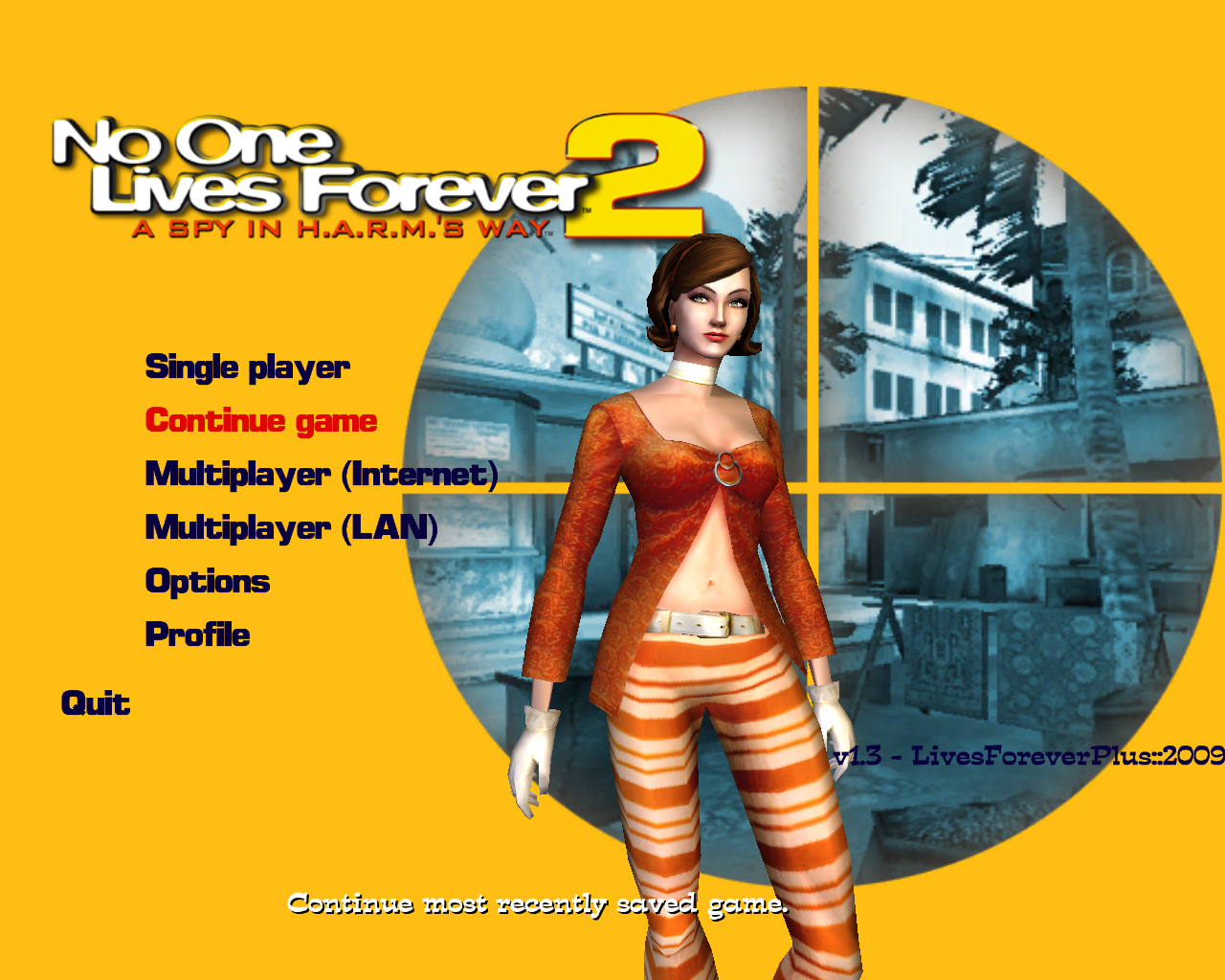 If it's OK with you, I'm just going to gloss over the fact it's been 10 months since the last review and talk about one of my new favourite games: No One Lives Forever 2. Like the first game, it seems to be perpetually playing a game of licencing limbo and isn't available 100% legit anywhere online, but it can be found very easily and "mostly legit" with a quick google. However I have a boxed copy... right... here... 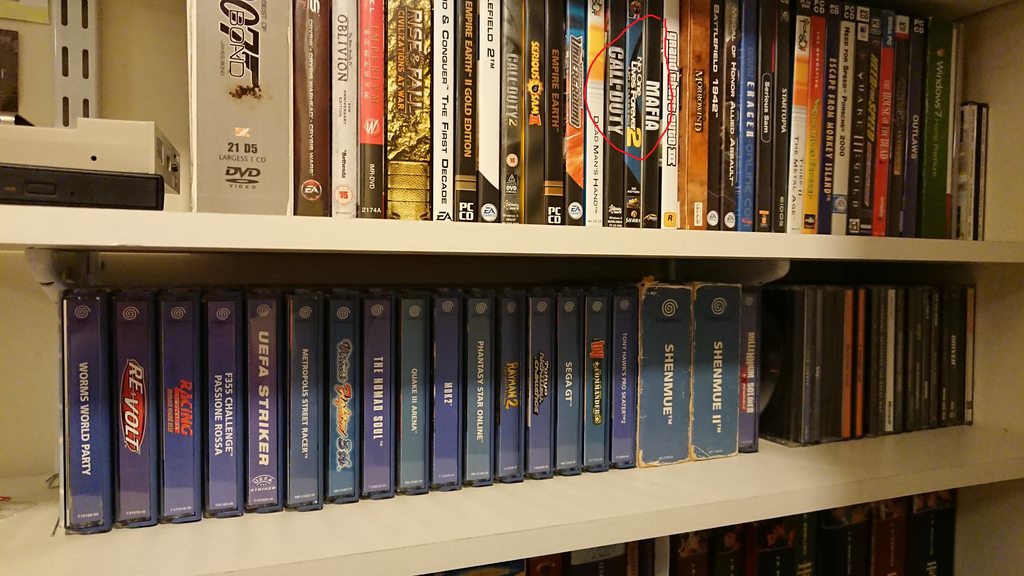 Getting it running
This version comes pre-patched for modern systems and widescreen resolutions. I however like to cut off my nose to spite my face, and played it at 1280*1024 on an XP PC regardless. It's a single large self-installing/extracting .exe file which creates game files in program files like any other game would.

Gameplay
Like the first NOLF, you play through Cate Archer's 1960s spy adventures (and misadventures) with FPS and stealth gameplay at the forefront. There is a heavier focus on shooting in this game compared to the first, with less hiding around corners and waiting for cameras to look the other way, and more shooting fat purple men in the face.

Gadgets do still play an essential role with welding, lock picking, and a magic utility gun being fundamental tools for completing each level. They're easy to use and essentially function as different variations of the "use" key. Unlocking a door? Hold F. Welding a hinge on a deathcage? Hold F. Wiring a bomb? Hold F. 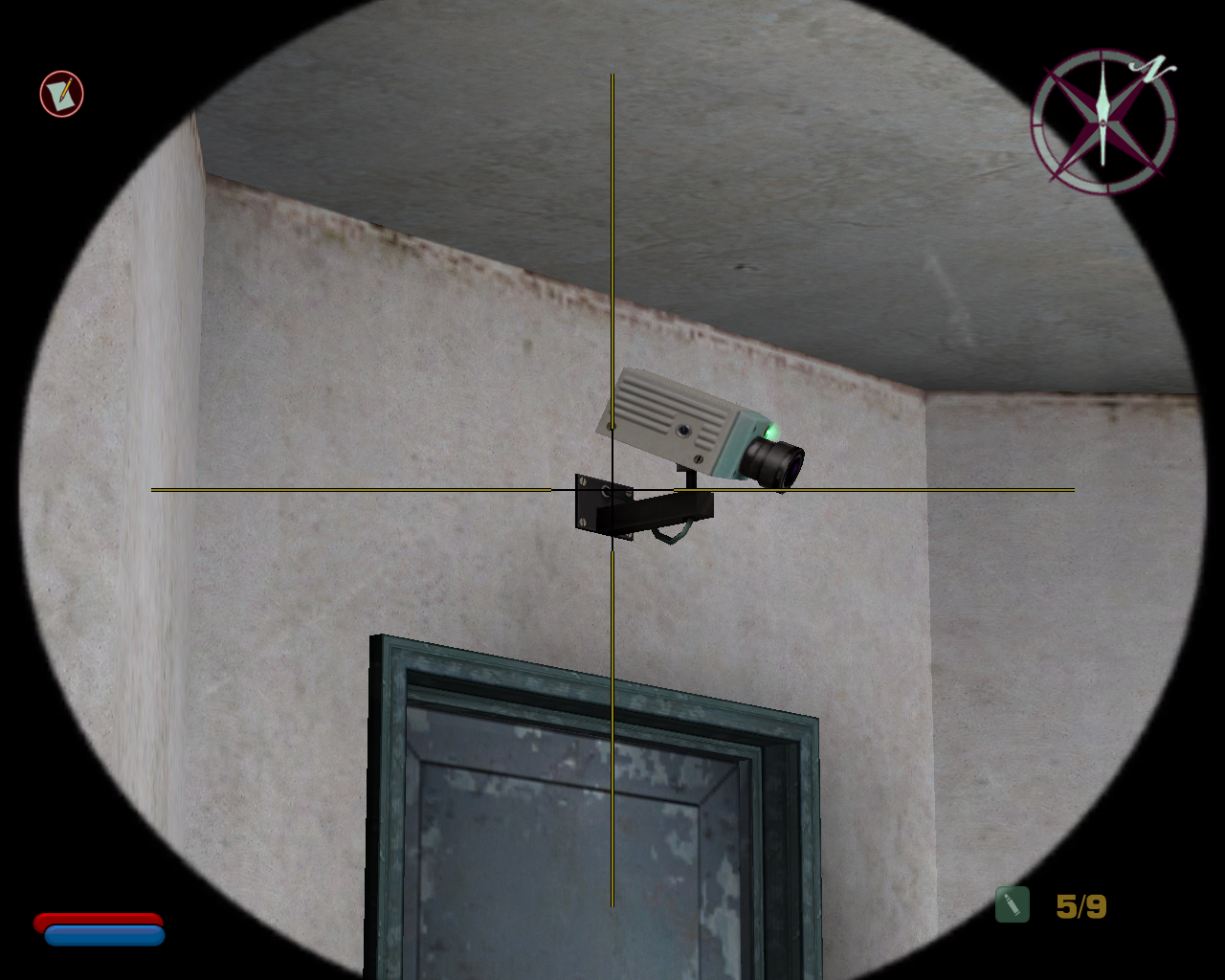 The amount of time you hold F will thankfully decrease through the game as part of RPG elements introduced in this sequel. Each level is littered with literature that gives you XP that you spend on levelling up basic skills like marksman, gadgets proficiency, health, armour. They're pretty big boosts too, with the top level of marksmanship (unlocked in the penultimate level) adding up to a 1,000% boost in accuracy and "proficiency" over level 1.

With a focus on shooting, it's fortunate that it feels as smooth, responsive, and rewarding as any typical shooter of the era (which feel sharper than today's shooters) accuracy is visibly and clearly reduced through movement and you can lean around corners and shoot to get the upper hand on the unsuspecting evil dudes. A slightly disappointing range of guns are included, with 1 pistol, 4 sub-machine guns and no longer range semi-automatic weapons featuring in regular load outs; I would have liked a long range option some times.

Jumping is slightly pathetic, but preferable to contextual button prompts to mount cover and walls etc. Running too is slightly slow and when you're under fire, or backtracking to find the next piece of your current puzzle, you'll be wishing for a spring button.

The game also starts to drag a bit with several boss fights towards the end that seem like the ending coming and going (all fairly easily, too) before moving onto some other locale. The story isn't particularly complex, but flows well for an excuse to hop between continents and is deep enough for a game of this tone.

Presentation
Fortunately the worlds you'll be traipsing around are a pleasure to explore; the varied settings across India, Antarctica, Japan and, naturally, a secret underwater base are brought to life through a fantastic art direction that creates a wacky, silly but believable world. All the levels feature good use of vibrant colour which even in our post-brown era of gaming (think Gears of Brown, Brown of Honor, Brownout 3) is still eye catching.

The worlds created by each level have that special ability to feel lived in. Like Hitman Blood Money, each level feels contained but detailed; nothing is wasted and everything shown adds to the sense of place. From the tired walls and restaurant stalls in Calcutta to the fantastic circular architecture of the Secret Underwater Base, each level immerses you in a funky, 1960s world that is grounded in reality. The notes and posters that set dress the world tell the comedic stories of the people that live there, from the evil corporation's marketing team trying to raise moral to reading the letters from the Evil Boss' mum. 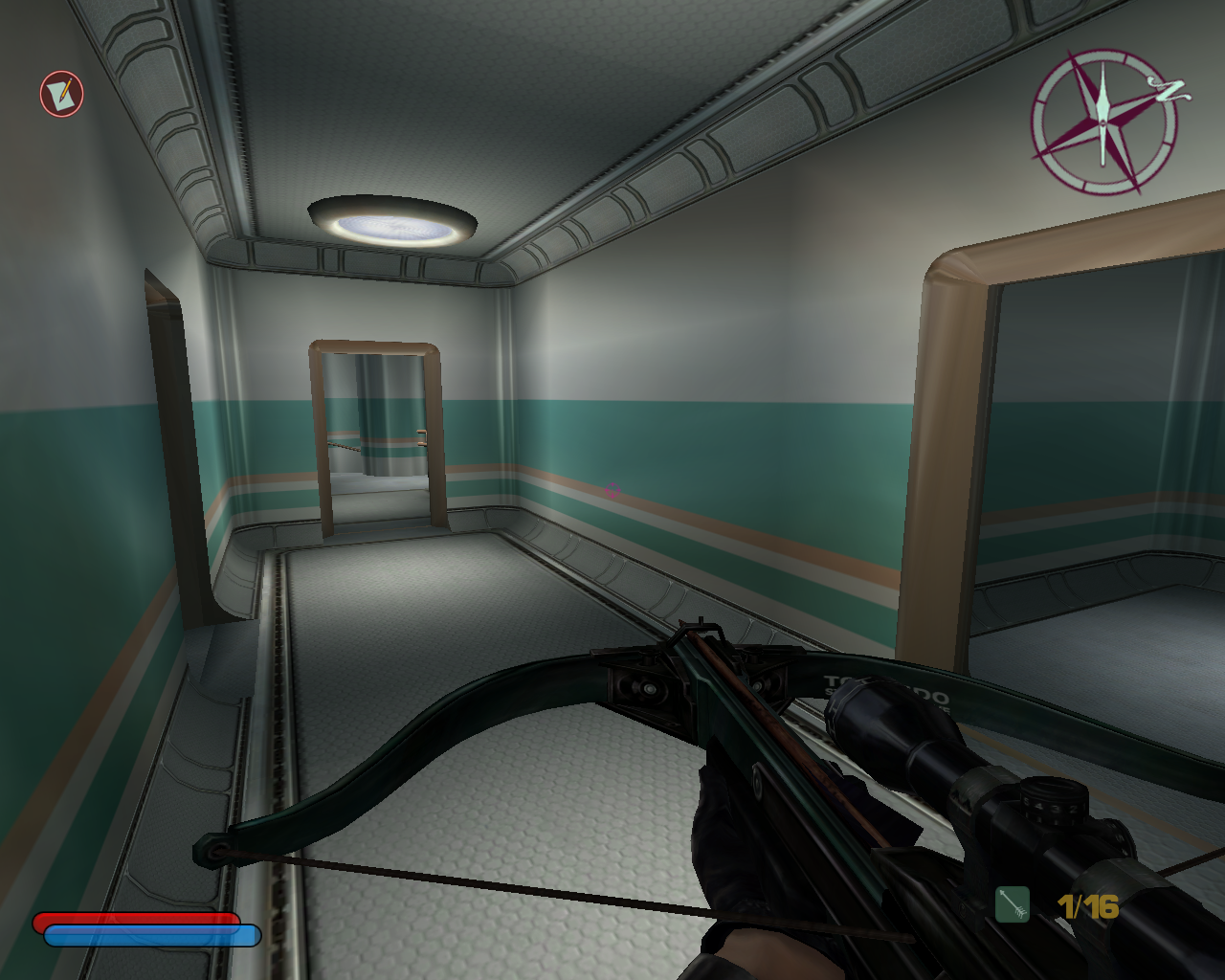 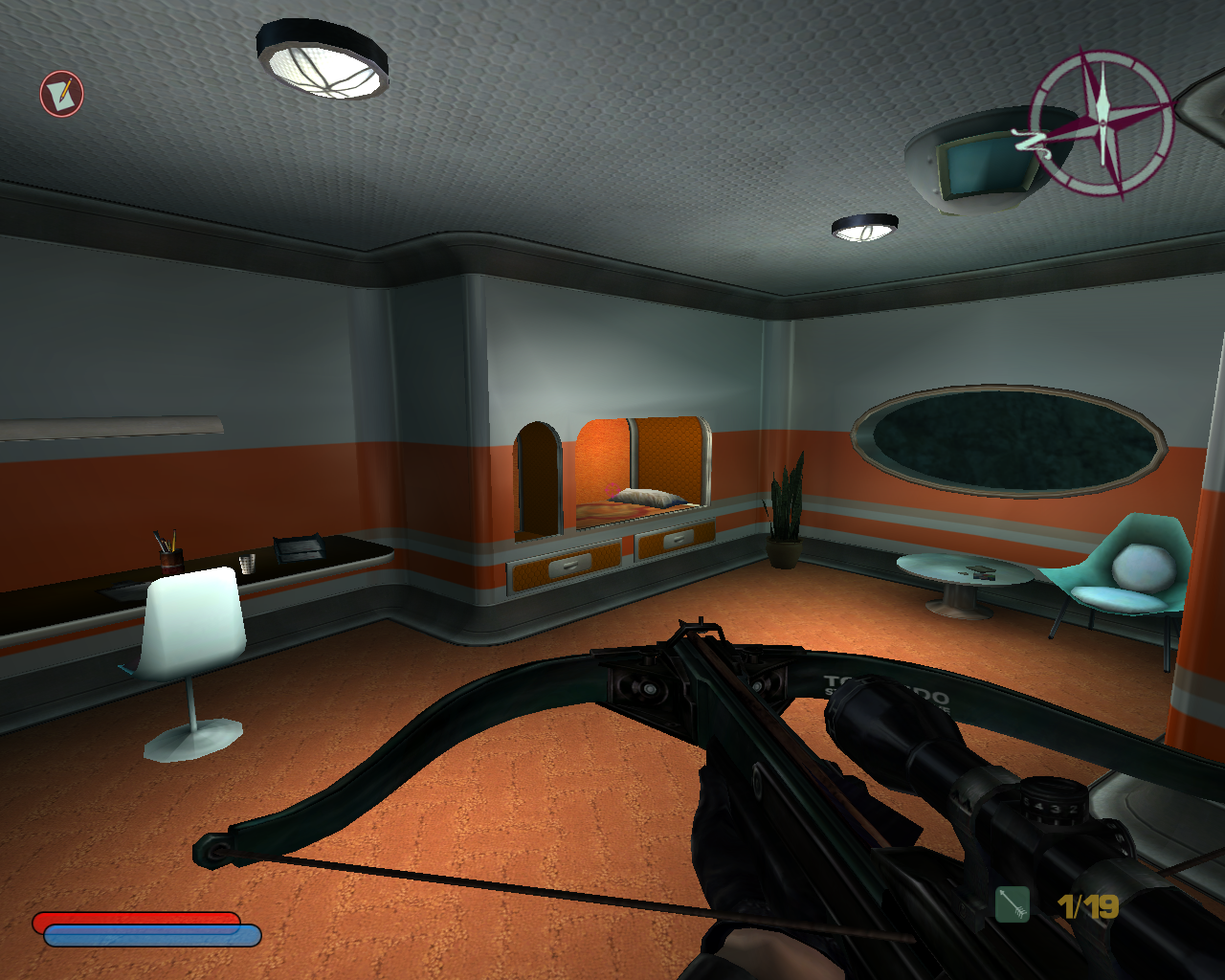 Does anything say 1960s evil lair quite like circles, rounded edges and striped paint?

The comic tone is retained from the first game and goes hand in hand with the art style. The humour stands all the taller for not being a "comedy game" but rather a fantastic 'normal' game with a comedic tone. From a midget French Mime riding a unicycle to a dense war mongering US General, inoffensive (unless you're particularly insecure) stereotypes exist everywhere in NoLF2. I particularly enjoyed watching the Mine's henchmen try to communicate an urgent message by miming and the enemies that are "cubed" for the boss' enjoyment (although it's quite creepy when they start attacking you!) 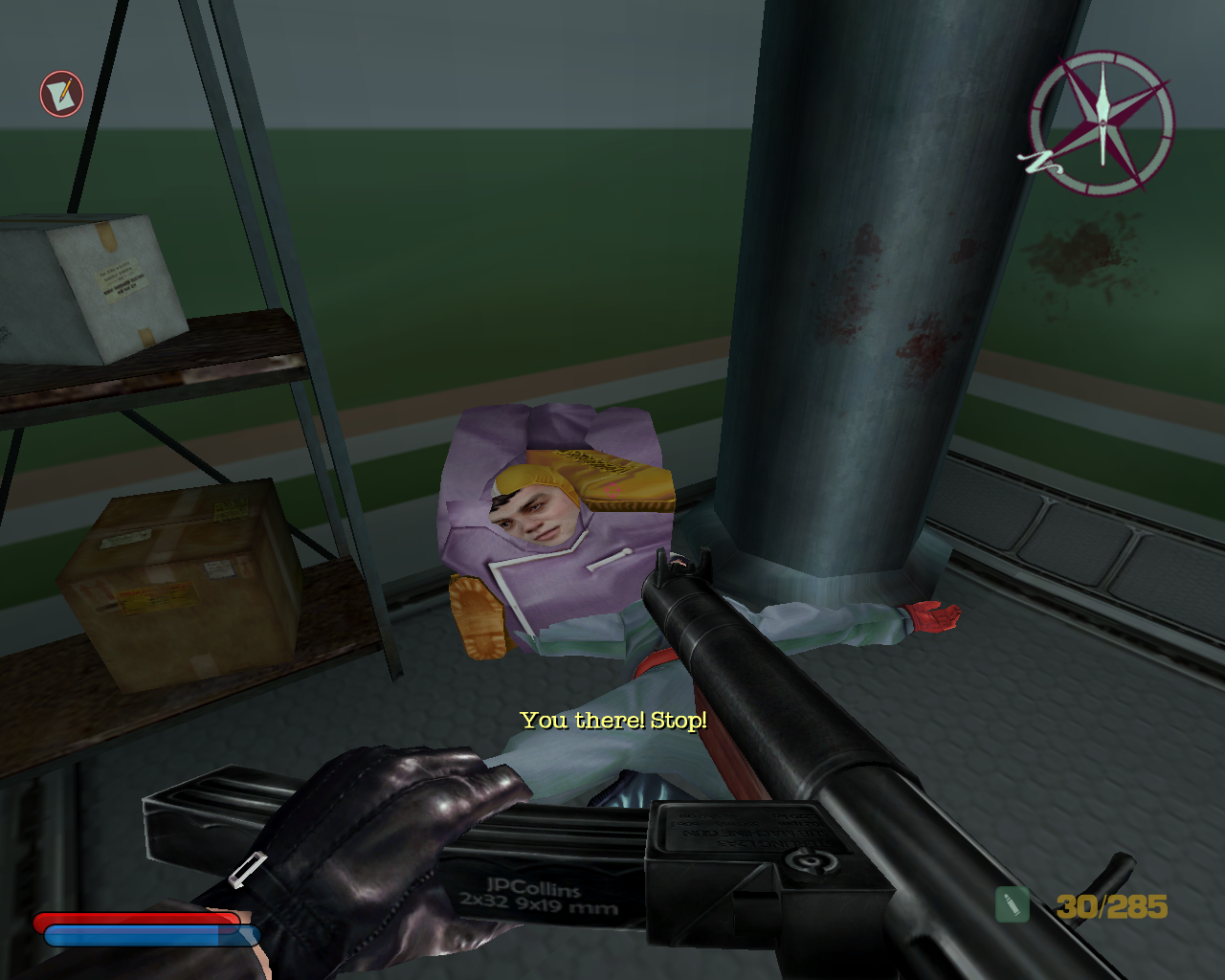 Having a cubed purple dude come at you is quite unnerving at first!

Cate doesn't really grow over the course of the story, unlike the first game. Here, she starts as an international badass, and ends as an international badass. Armstrong the short angry Scott returns from the first game to be Cate's double act and whilst Cate actually has fairly limited dialouge, it's well done and the banter between Armstrong and Cate is well played. The voice acting is good for 2002's standards but a bit weak compared to today's mega ultra blockbuster games. In fact, Cate doesn't really show any emotion at all which is perhaps a weakness for the game, and is in some ways a bit like 007 - just a quiet, perhaps smug confidence but with sarcasm when necessary. Now that I think about it, there isn't anything particularly likeable about her; nothing that I don't like but she doesn't really have much personality at all.

The game doesn't have the same subtle feminist message as the first game, as Cate is well known as an international badass as doesn't have to prove anything to her superiors. It's refreshing to play a game with a strong, attractive female lead, that doesn't make a big deal out of her gender, or take any swipes at men, or have a stupid edgy haircut, or have to prove she is better than other characters, and it's the sort of thing that the more "woke" (as much as I hate that word) developers like UBI should take note of in 2020. In this game, women are equal or better to the men and no one makes a big deal out of, except for me. 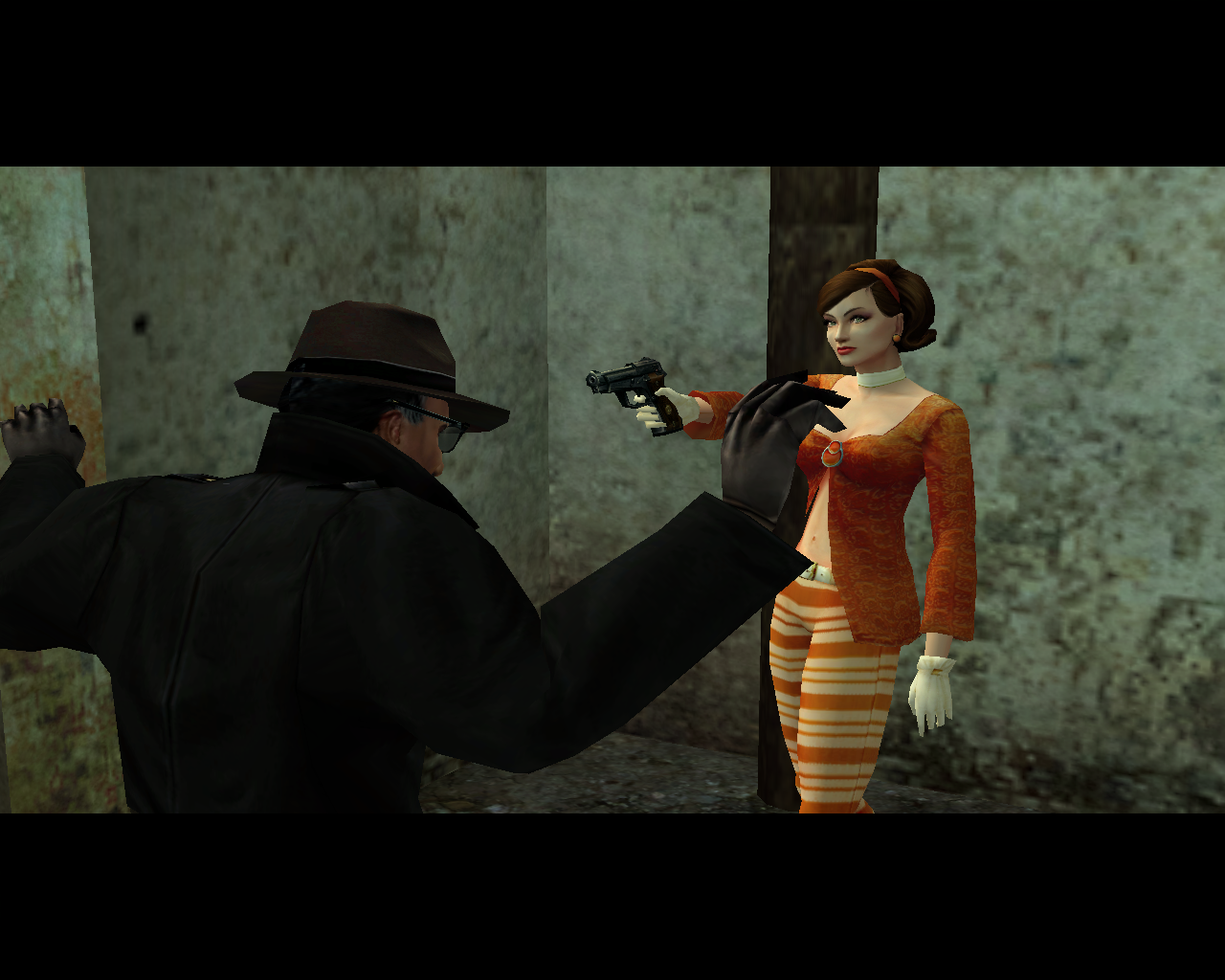 Performance
I was playing this on a S939 Athlon 64 3200+ overclocked to 2.4GHz. Paired with a 7950GT and 2Gb of RAM, I saw quite a few frame drops from 60fps that were all CPU related with the game on max settings.

Graphically the game looks gorgeous from a technical stand point as well as from the art direction. Compared to the flat faced models of MOH:AA, NOLF2 has much higher polygon counts for the main characters' faces and bodies. The graphics are good enough to allow myself to suspend my sense of disbelief and get sucked into the world, and I particularly liked the effects created by your torch. 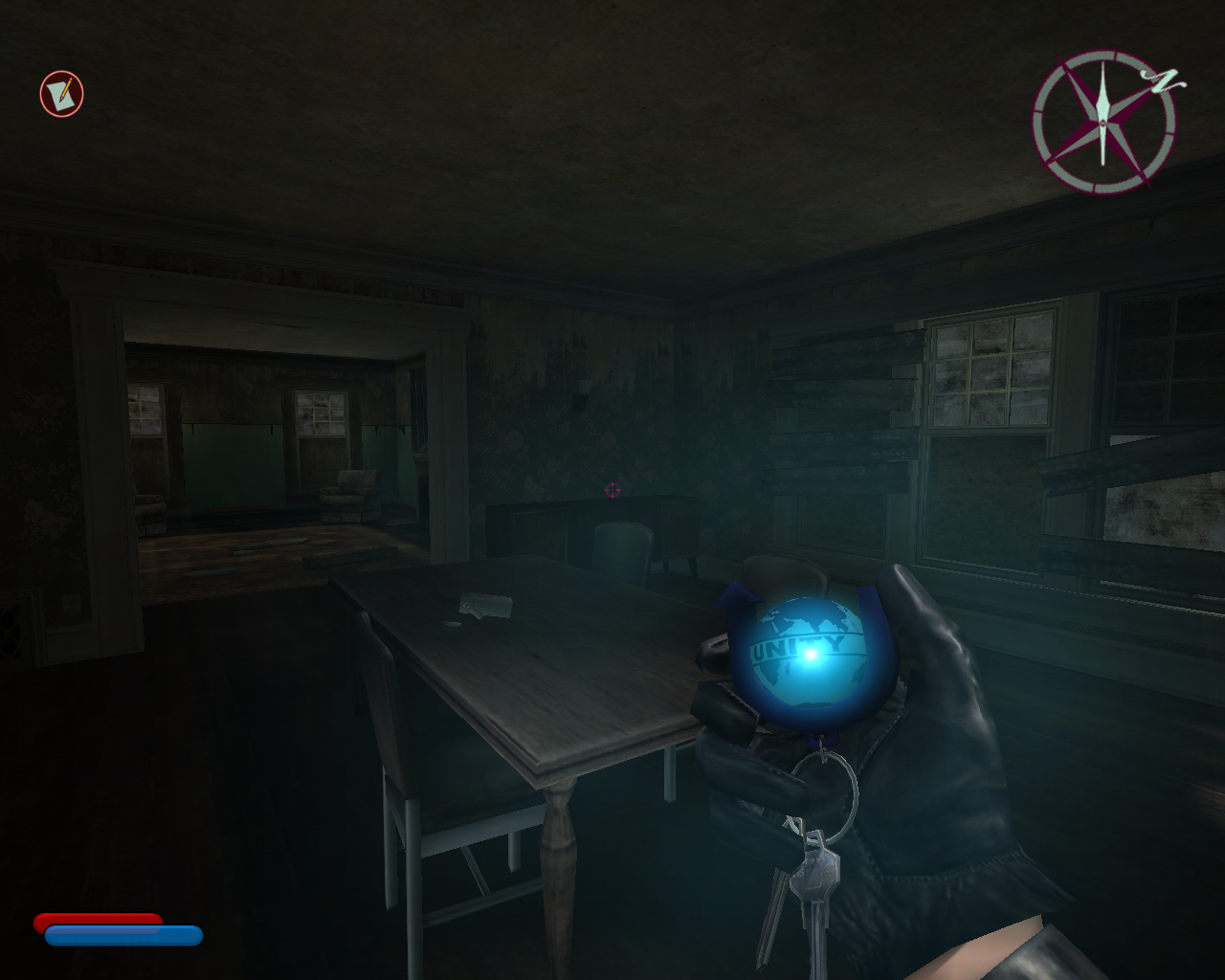 You may be fighting ninjas in rural USA in the middle of a tornado, but the game can still create foreboding lighting when it wants!

Sound
Sound was... fine. The pistol in particular sounds good but none of the games have the same impact as the sniper in MOH. The music is funky 60s stuff which you'll hate or tolerate and can wear you down after a while.

Was it fun?
Absolutely! Play it! Now!

Should you play it?
A pretty good shooter is elevated above the crowd in a saturated genre by a fantastic world, successful comedic tone and fabulous characters. Play it! Now! 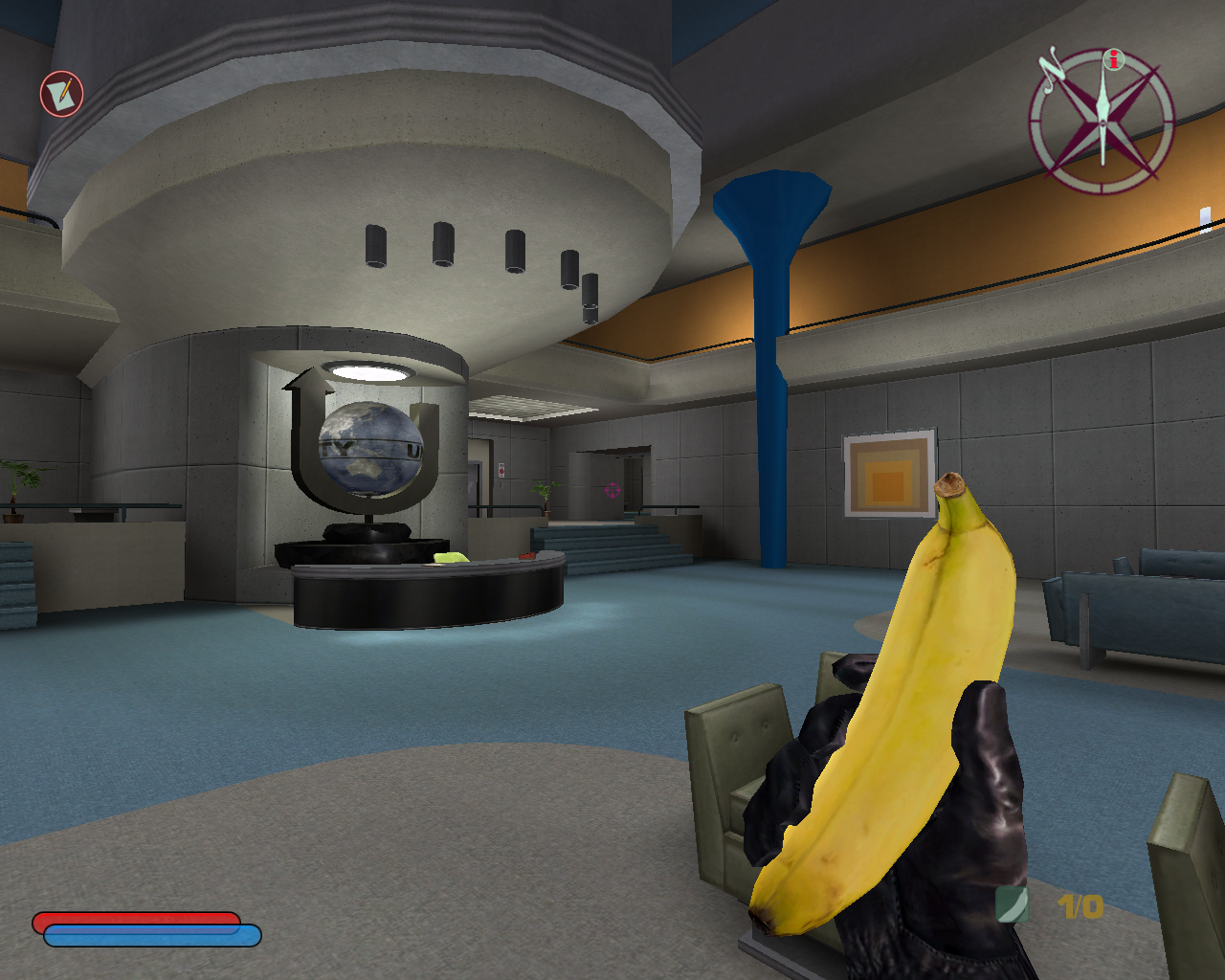 Why the comedy works for me - you're running around a straight faced world spy organisation, but fighting mimes with bananas. 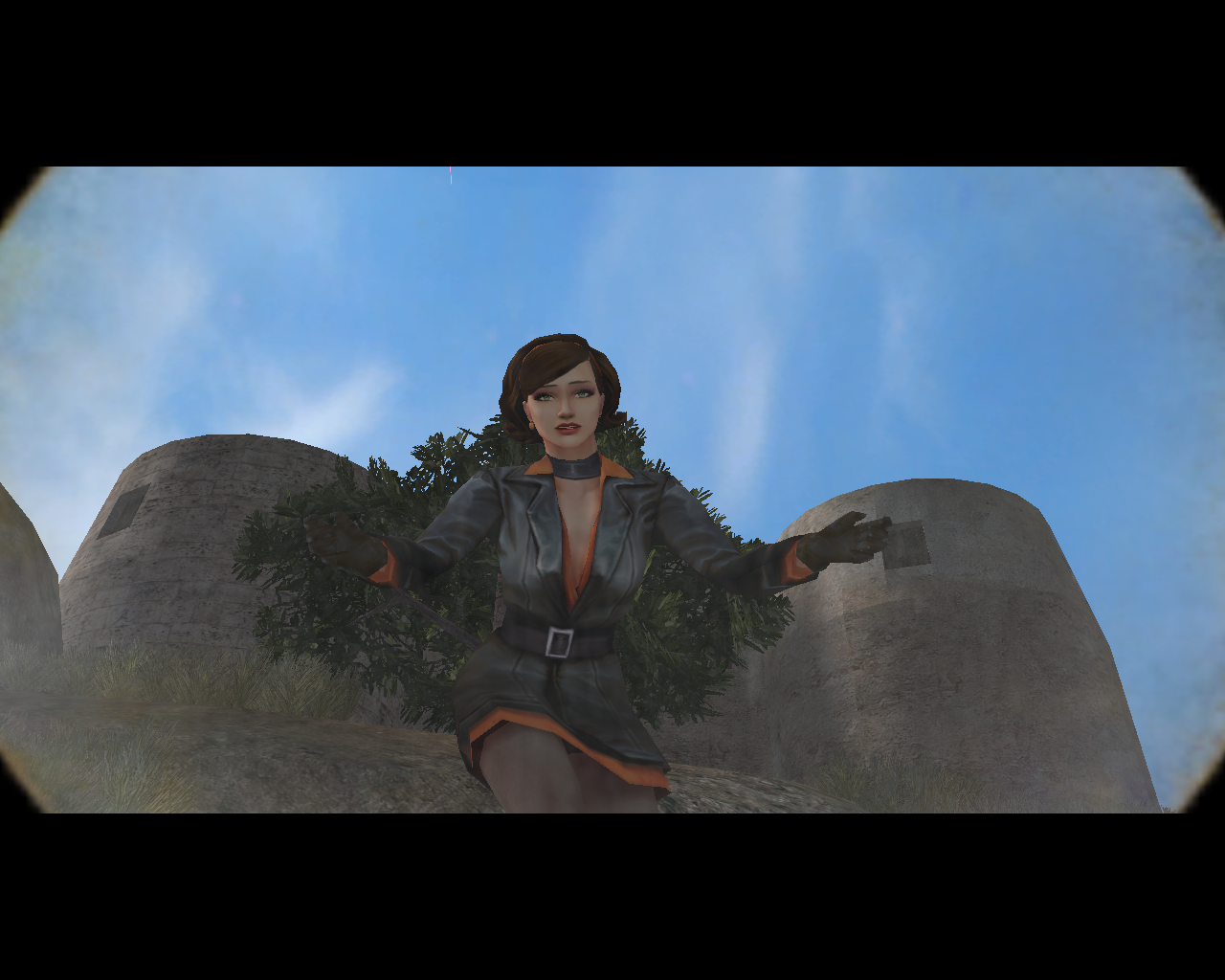 Quite a lot of emotion in one face for 2002 graphics! Unfortunately this is about the only emotion Cate will show in the whole game. 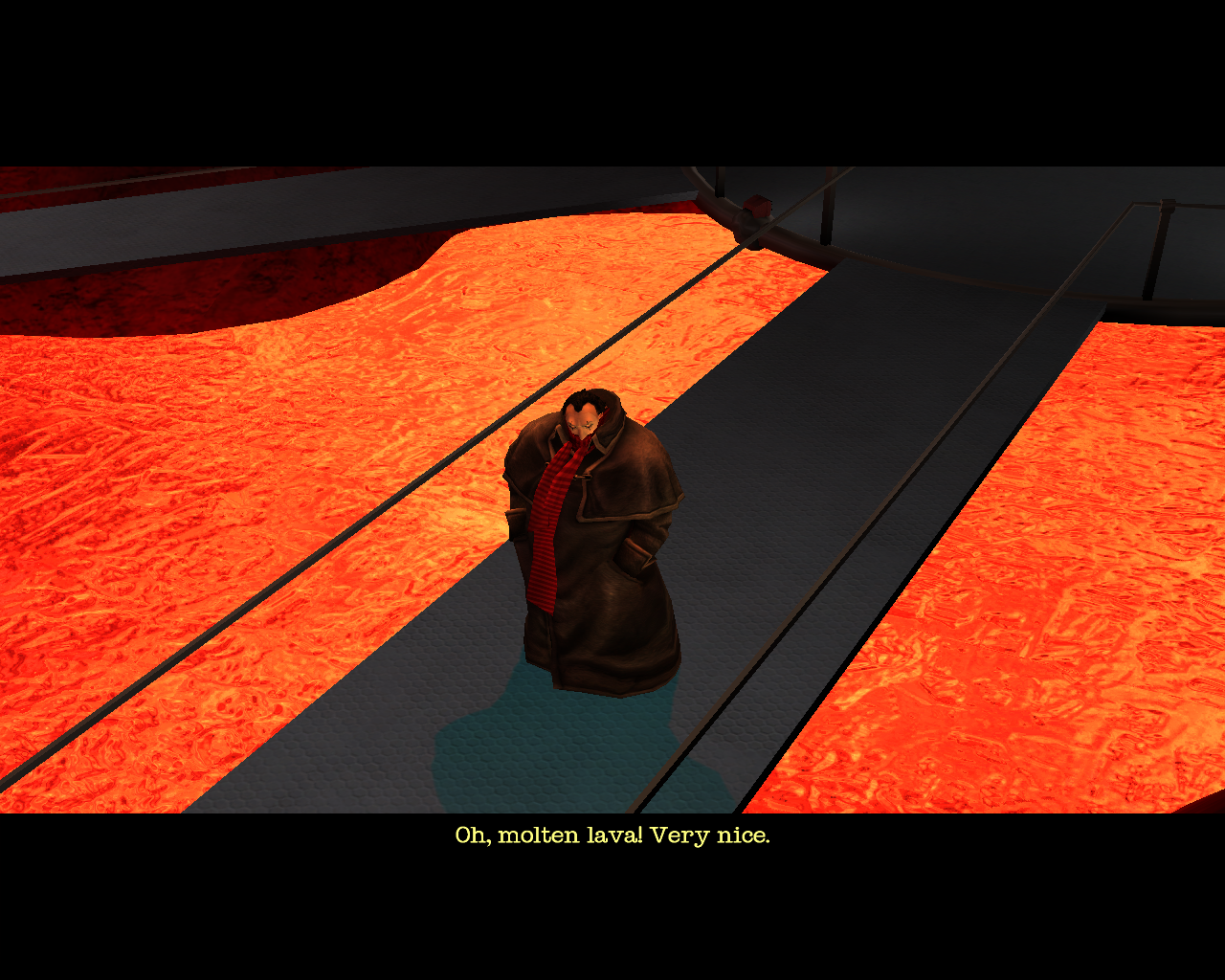 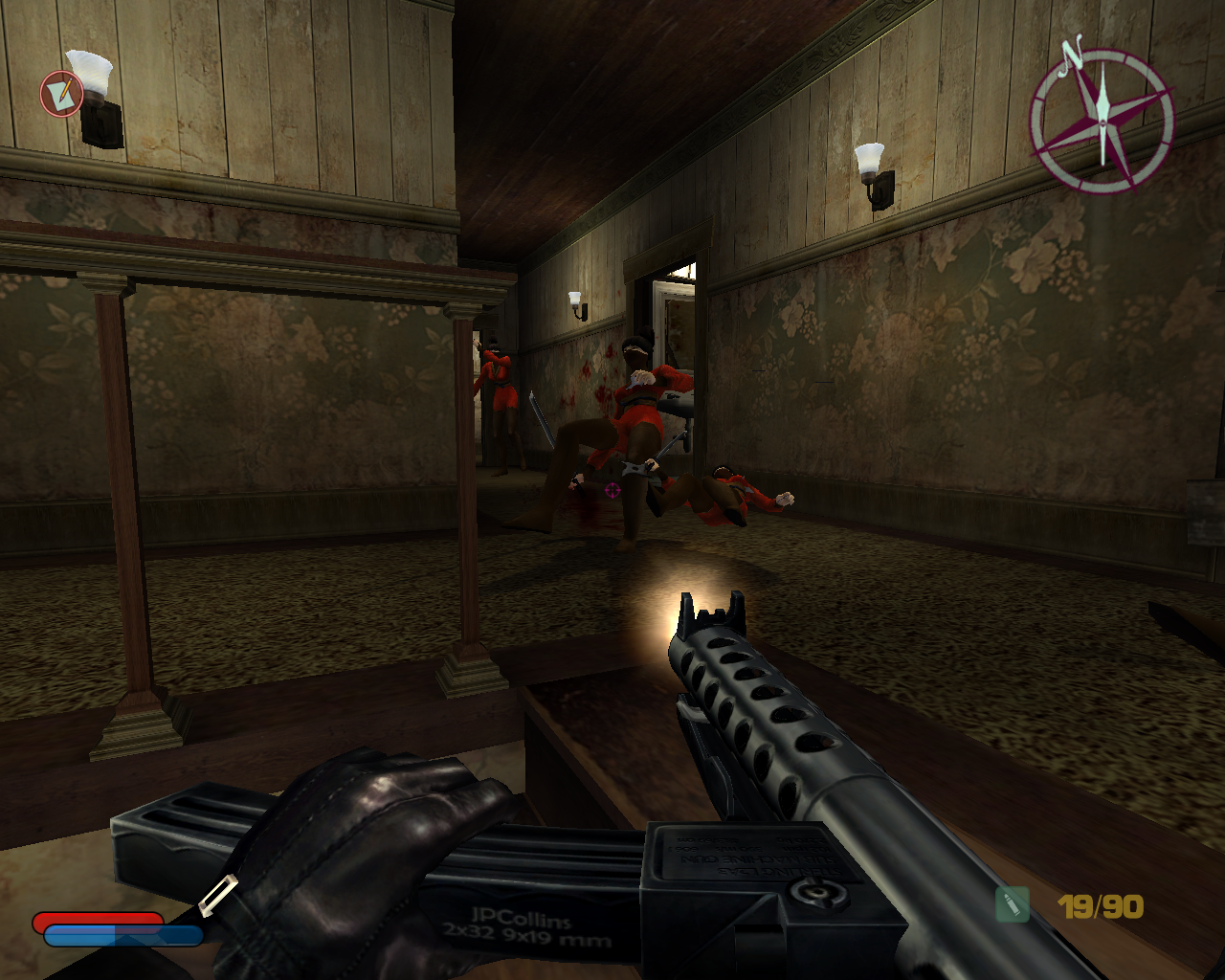 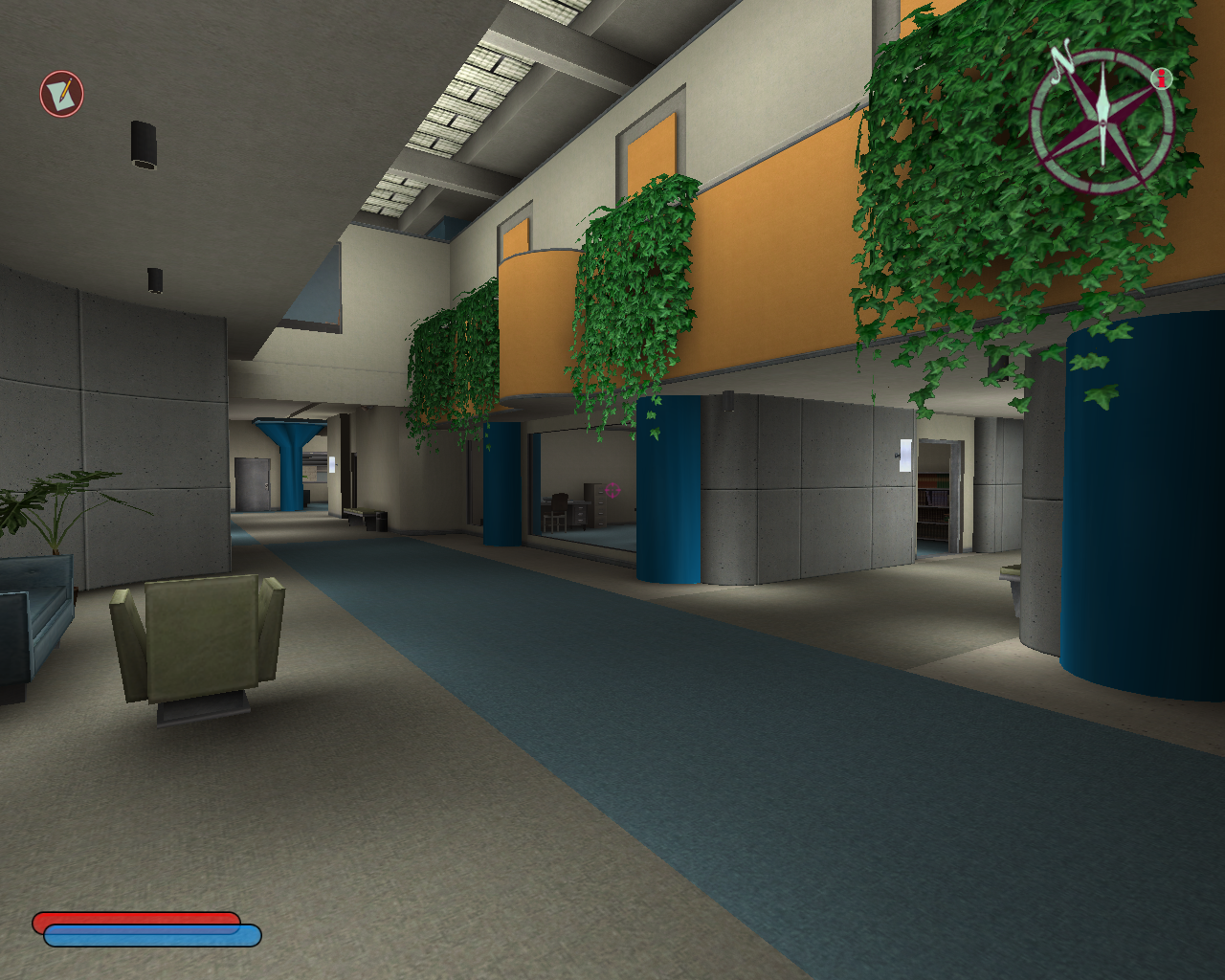 Probably the best graphics in the game 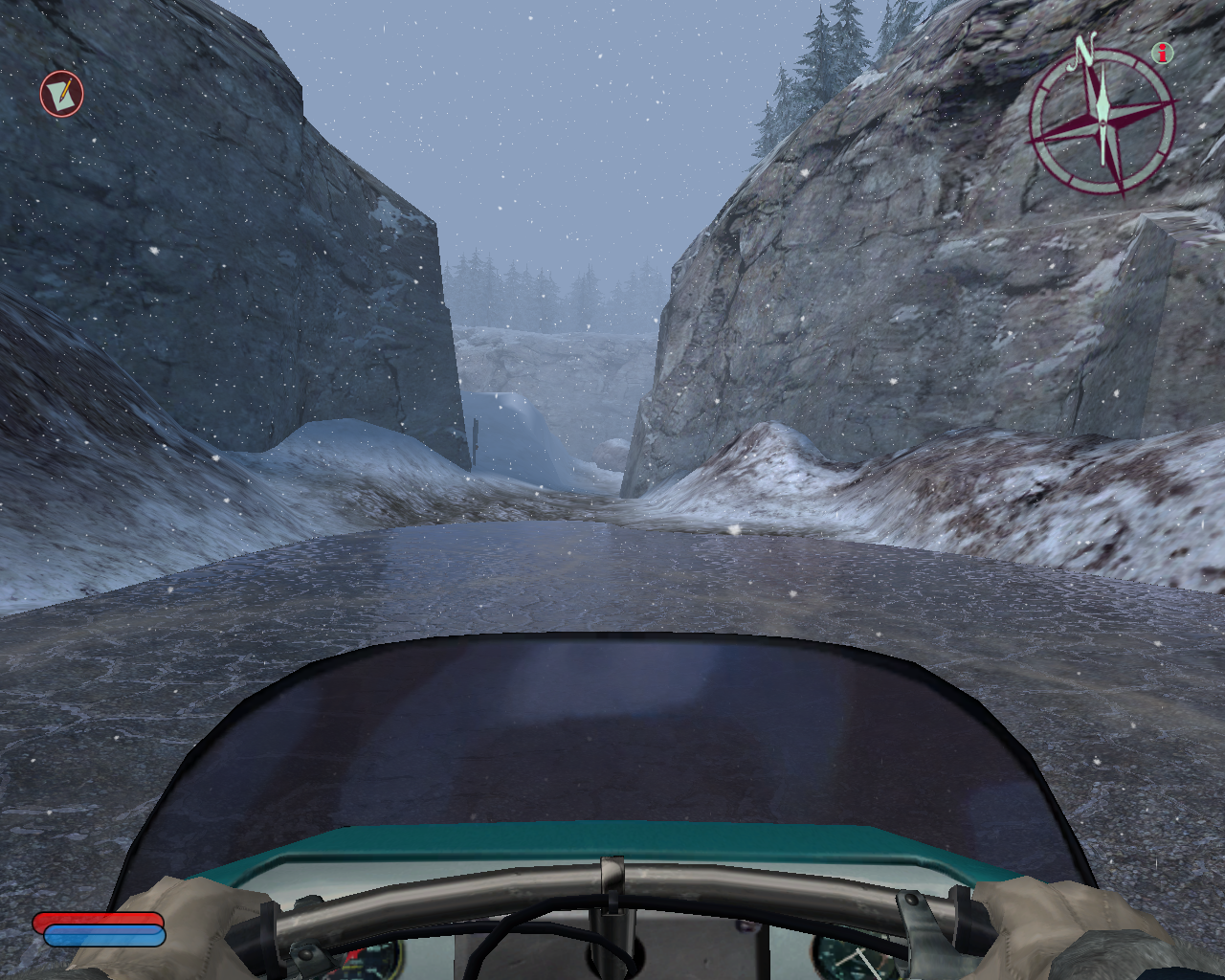 An early mission has you driving a snowmobile; the terrible physics make it the worst part of the game 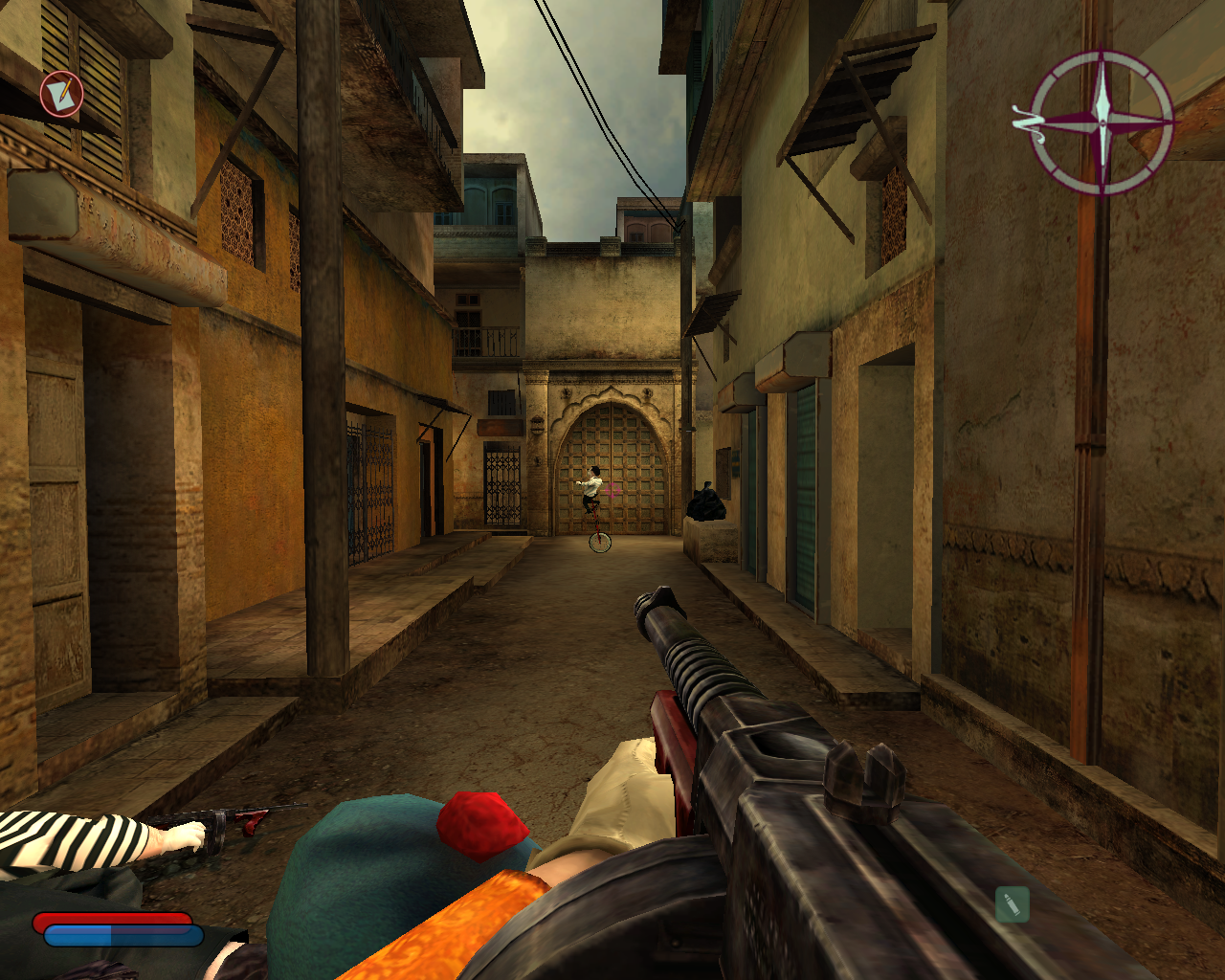 Catching a French midget mime riding a unicycle in a turret section on a tiny bike ridden by a fat ginger angry Scotsman. 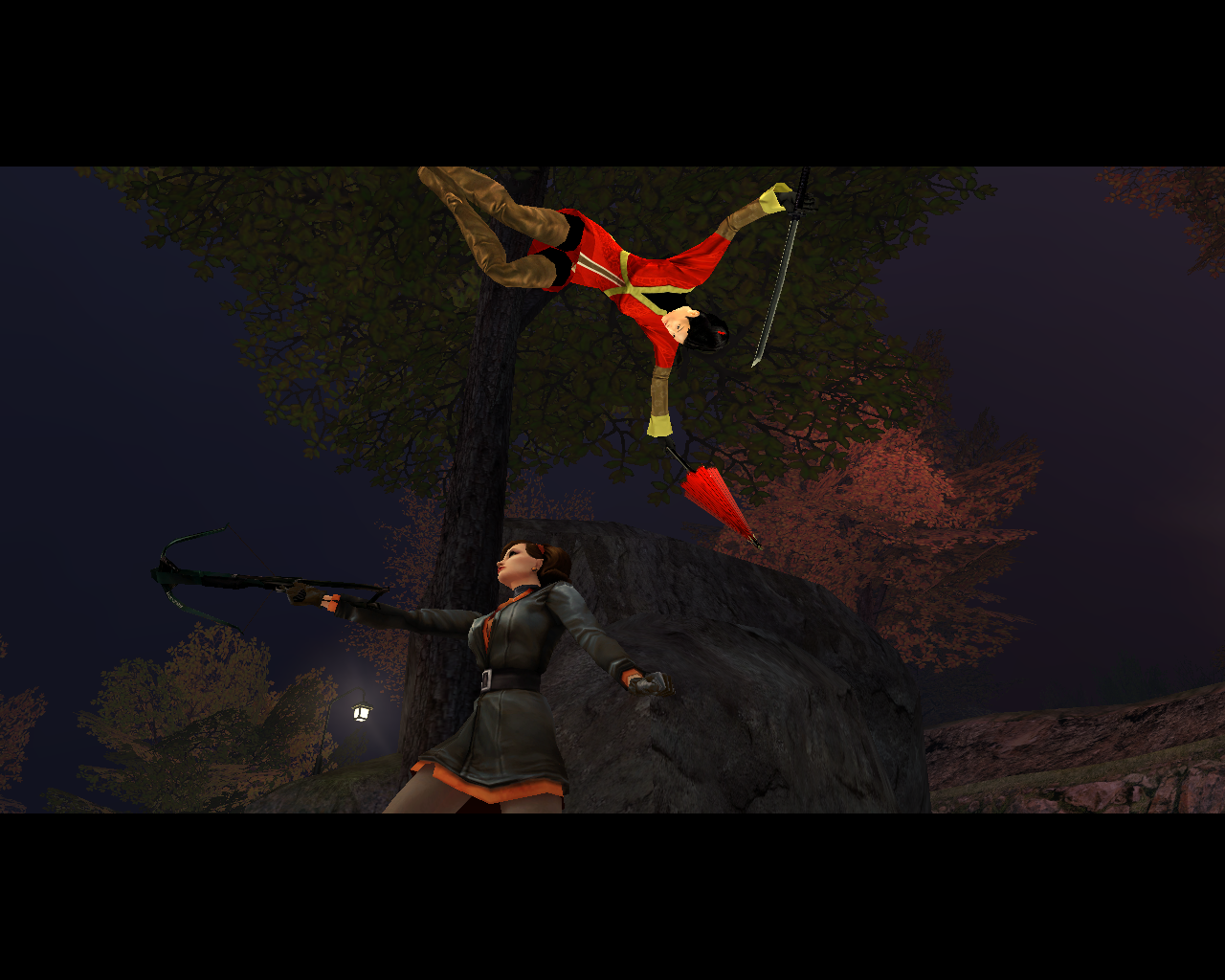 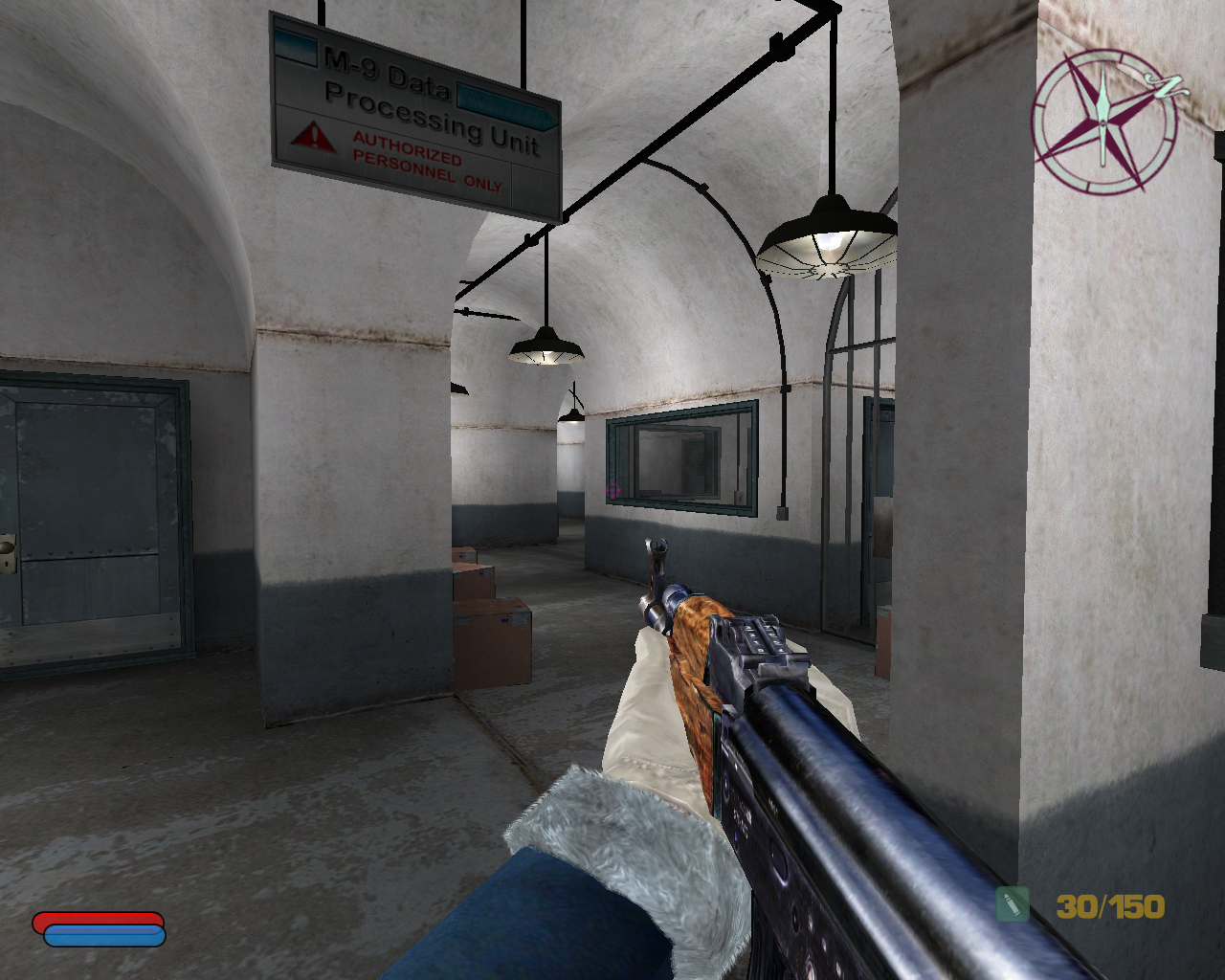 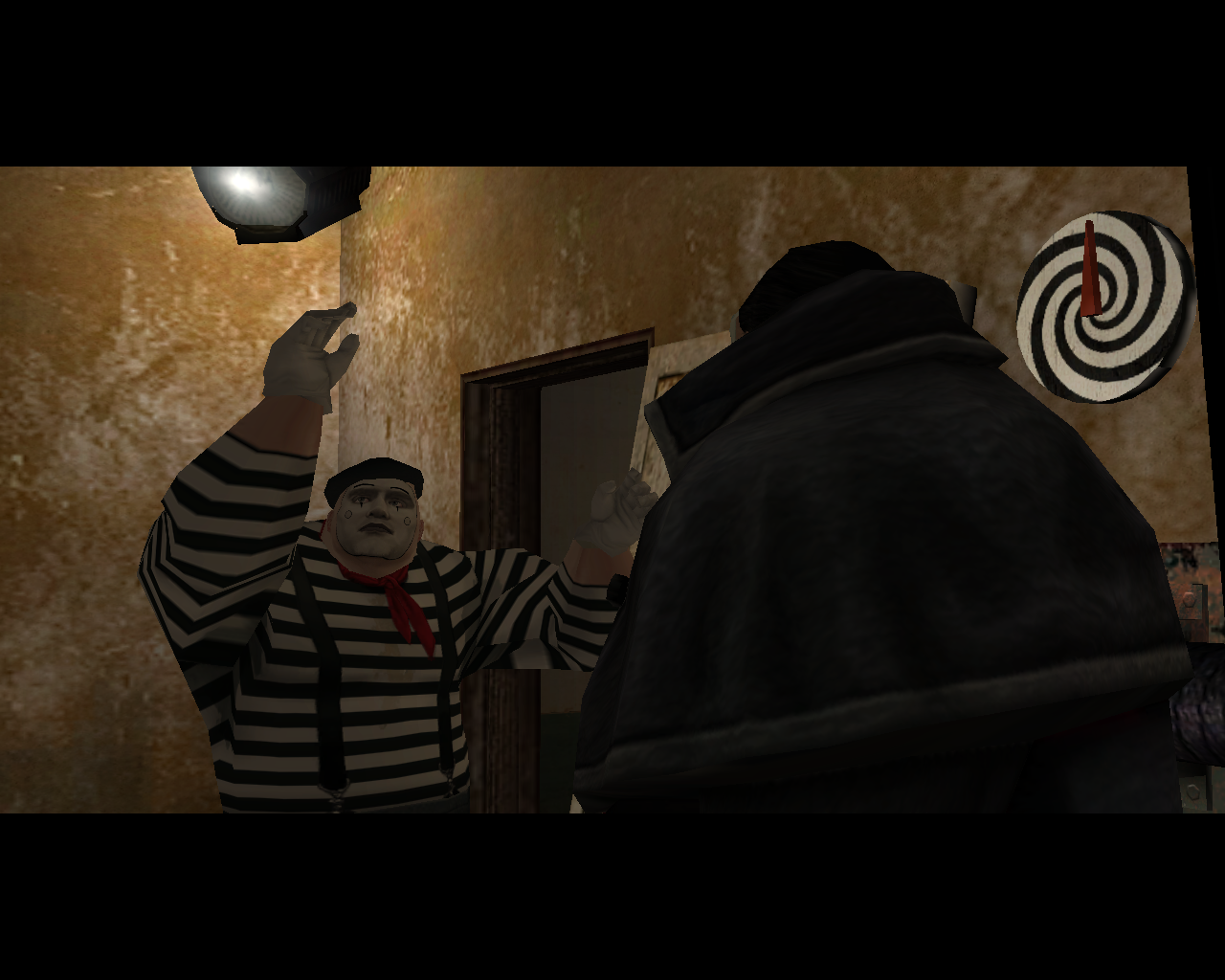 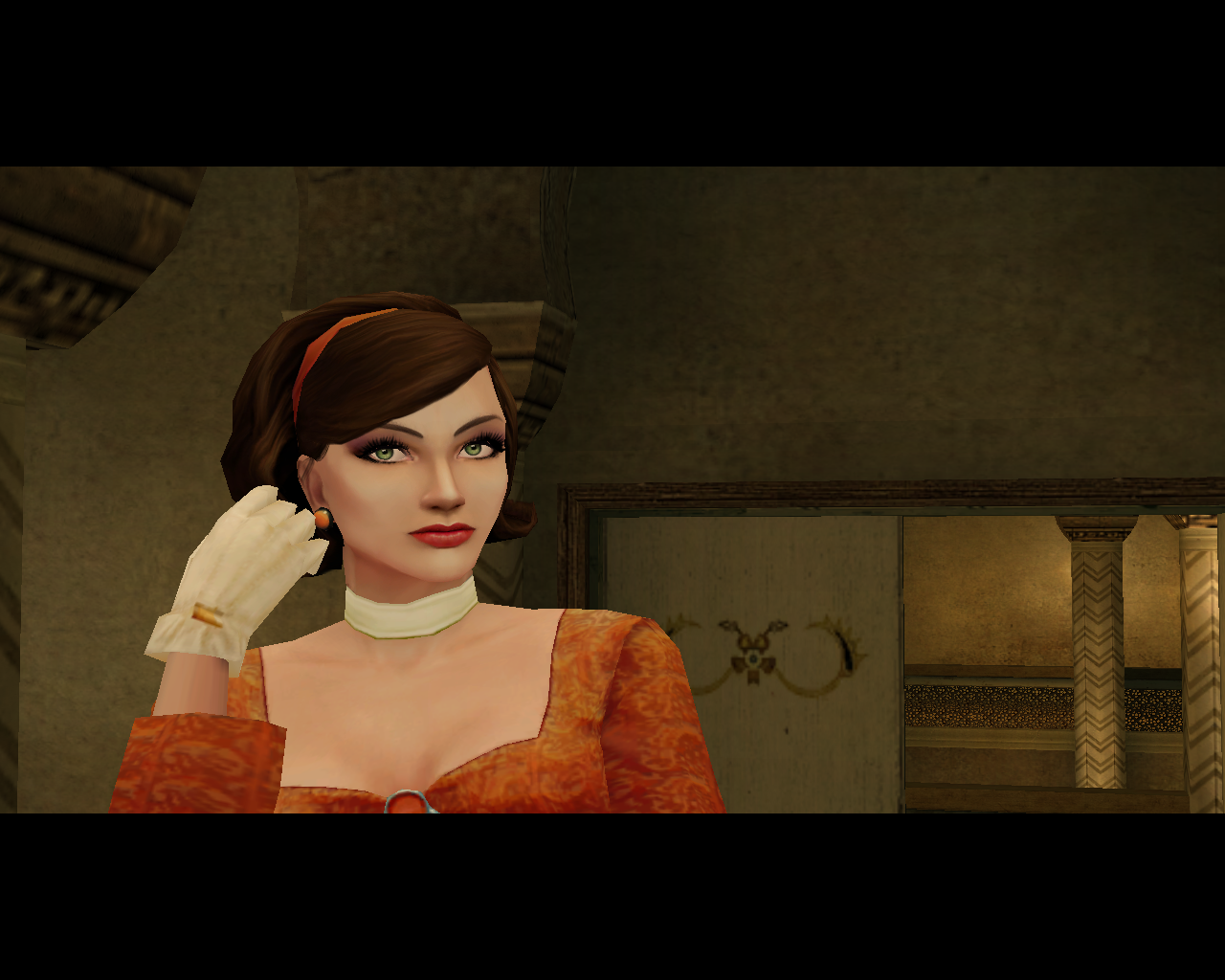 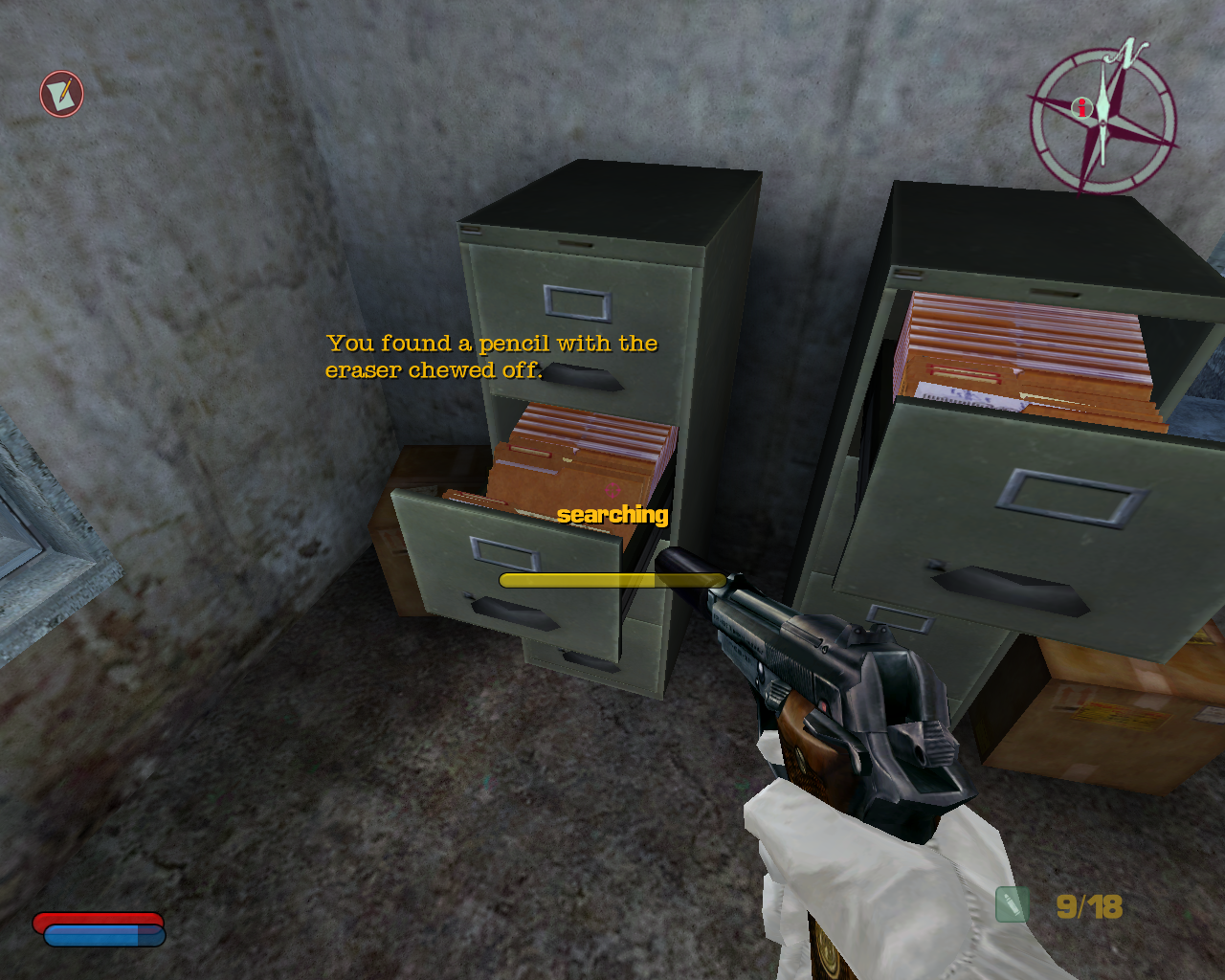 A very nice right up dude! As someone who didn't get into the first NOLF at all (just not a fan of forced stealth), I really loved NOLF 2. For 2002 it was an absolutely gorgeous, funny, unique FPS amongst the rising WWII / military themed drudgery that was taking over the genre at the time.

Stealth in NOLF wasn't that forced. You could almost always blast your way through, sometime it was easier that way too.

I'll take your word over my hazy memories for sure. I just *remember* the game having sections which you outright failed if you were seen. I could be completely wrong however!

Yeah the stealth was never forced. Often I would cock it up quite early on and just start gunning instead. A few of the levels put greater weight on being stealthy, like avoiding the super soldiers whilst putting out fires to save civilians, but even then I usually just ran around and dodged them rather than hid from them.

I'll take your word over my hazy memories for sure. I just *remember* the game having sections which you outright failed if you were seen. I could be completely wrong however!

Maybe 1 or 2, and for short sections IIRC. It was no Thief.

Oh certainly. Now that's a series I really couldn't get into. Like I said before my memories of NOLF1 are old and hazy. I just remember really bouncing off that game HARD while enjoying multiple playthroughs of NOLF2 over the years. If anything this exchange is really making me want to revisit both titles.