The Mission: put together a quiet, compact, extremely capable system with the widest range of software and operating system support possible.

Before someone dismisses this as yet another attempt at a be-all-end-all retro box, here are some of the specific use cases I had in mind:

Reliability
Another goal with this build was to maximize "turn-on-and-game" reliability, that is, to some degree I know that I can hit the power button and the machine will be fully functional without having to debug or troubleshoot something (hardware or software). 20+ year old hardware can present a challenge in that regard as this forum knows very well, so more modern components were chosen where possible in the spirit of both longevity and convenience. For me personally, young kids present another challenge where I just have a lot less time to enjoy games, so maximizing that time is important to say the least.

And hey - isn't this Very Old Games on New* Systems?
*newish, in this instance, anyway.

Software
Dual booting Windows 98 SE and Windows 8.1. Nope, I'm not kidding! I feel I don't have to justify 98SE, but 8.1 I like because of its reasonable hardware requirements (vs 7 and Vista), and the fact that it's currently fully supported (OS, browsers, the whole nine). Add a proper Start Menu via something like StartIsBack, and it's actually quite nice in my opinion. XP is totally possible too, and may eventually be what I shift to after I'm confident that I have a good process for backing up and playing my Steam games.

Dual boot is accomplished via use of a program called EasyBCD, which then allows Win8 to natively show a nice graphical boot menu.

Bottom Line
Although it's about as retro a computer as the NES Classic is to the OG NES-001, if someone asked me to help build a retro PC gaming machine, I think this would be it. Game compatibility is great starting with late DOS games (my last full playthru of Wing Commander III took place on this machine) all the way to where you start running the GPU or CPU out of breath (~2005, or thereabouts). For earlier software, DOSBox is a pretty easy choice - with Soundfont and external MIDI support via the Live! it's pretty easy to get audio sounding the way you expect it to. 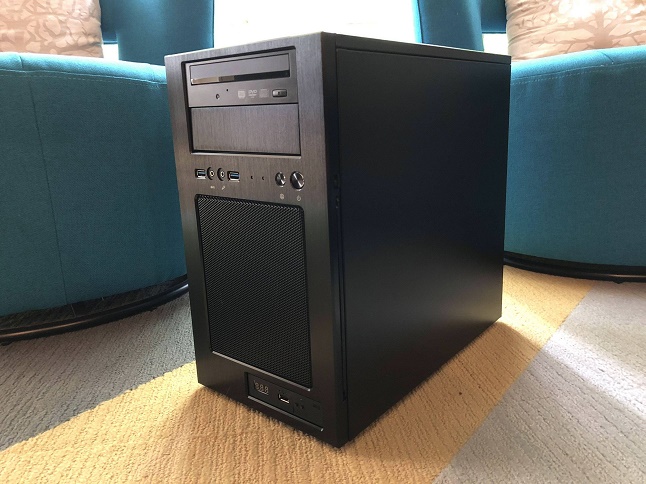 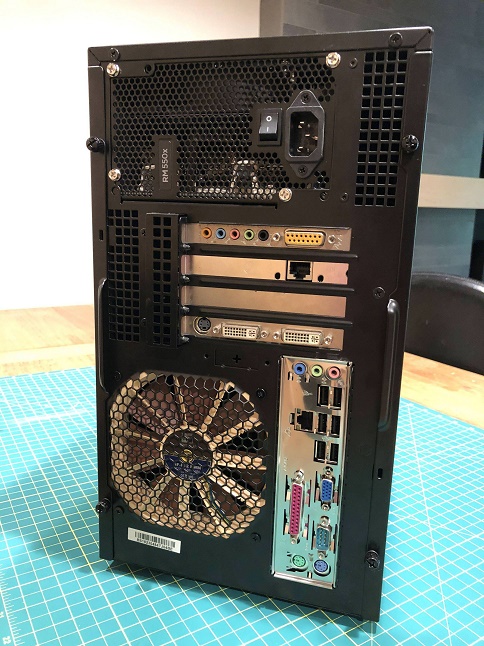 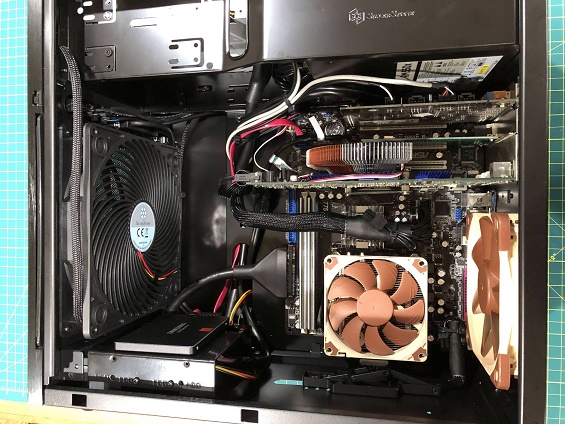 Me likes. As fun as messing around with period correct hardware is I find that the machine I leave sitting on my desk is the one that I can just fire up and play whatever I want on. And once you've seen late DOS SVGA games running lag free you can't unsee it.

I like builds like this. To me it's not important to make builds period correct. I choose function and convenience over historical correctness and I've never really liked the beige look. Back in the day I wanted black cases, so mine got spray painted. I was so pleased when black cases, optical- and floppy drives became a thing. Not to mention the old computers made terrible noise with their small and whiny coolers and fans.

This looks like a fun and practical machine. Good stuff.

They might have similar requirements on paper, but when my father upgraded his old windows 7 laptop os to windows 10, it became much much slower.

I agree with you on Windows 10 - there's a lot more going on there that you'd want more grunt for. Or, you'd have to do some real tuning in Group Policy/etc to shed background tasks and try to optimize. Then it would upgrade itself twice a year and this poor machine would just get gut punched.

As for 8.1, the performance is pretty good in this case, so long as you do not burden it with lots of tasks. The Wolfdale E5800 is potent and can stand next to a Core 2 Duo, but will run out of steam if you ask it to juggle lots of processes or browser tabs or what-have-you.

8GB RAM: although we had Netbooks and tablets and such far prior to Win8, remember this was the first time it really ran on ARM phones and tablets with far less RAM than a typical x86 PC; there had to be a ton of work put into optimization and I think it shows through even just booting it and looking at RAM usage..significantly less on 8/8.1 versus 7. No need to mention Vista. Would it run better on 4GB or 8GB or more? Yep, but that's part of the sacrifice in this particular build to get the wide breadth of supported OS versions.

All that said, I see XP in the future for this box just to really maximize hardware and game compatibility, but I want to finish building out my RIS image for XP and get the Steam games playable.

Thanks all for the comments on the build.

I like machines that max out OS's that weren't really meant to go quite that far... it feels like back in the day when I would try to put Windows 98 or XP on every new computer just because I didn't like MS shoving new operating systems down everyone's throats. I eventually gave up on putting Windows 98 on anything post-2004-ish 🤣

Me likes. As fun as messing around with period correct hardware is I find that the machine I leave sitting on my desk is the one that I can just fire up and play whatever I want on. And once you've seen late DOS SVGA games running lag free you can't unsee it.

I knew I'd get some great feedback from this forum. I started down the path of making a viable, updated XP Pro image for gaming as well as server admin, disk archival and so on. This will replace the Win8.1 partition.

Loosely, I followed https://ryanvm.net/forum/viewtopic.php?f=25&t=10609, which results in a slipstreamed XP uSP4 image with whatever options you want, and the install will trigger a series of batch files after it is done. This allows us to do any additional customization we might want.

I prefer to install OS images (and everything else I can) from my network, which for my retro machines, there's a dedicated/isolated VLAN and a Server 2003 R2 VM running the show.
OS deployment for 2000 and XP is of course done via RIS, but in general the process works just fine if you wanted to install via optical media (or USB - I've seen some tricks to getting XP installed from USB, but I haven't tried it).

In my case, nLite was there only to slipstream the service pack. USP4 also seems to handle at least the various C runtimes as well as .NET Framework, so be advised that you'll see some "extras" come along for the ride.
I re-spun much of my Windows 2000's ristndrd.sif answer file to handle setup all the way through, and did some heavy customization of the batch files (runNn.bat) included with the package. Rather than living on the CD/DVD, we'll call them from the storage server.

I've got an OS install process that, outside of the disk layout in text mode setup, asks zero questions. Beautiful.
The next couple of things I'm experimenting with:

My hope is that by installing these in the automation routine that follows the setup process, we'll have a totally updated XP install out of the box. Boot from the network, grab coffee, come back to a ready-to-roll machine.

..once I get this as well-oiled as my Win2k process, I can pile on DosFreak's findings for playing Steam games offline (I'm very grateful for this..thanks)

I really love this thing. I want it.

How has it been going now that it's had some time to settle in? Would you do it all the same way again?

What is this case model? Looks nice.

What is this case model? Looks nice.

That would be a Silverstone Temjin TJ08-E. I've got one meself. 😀

I like the case. I would have used it for my WinXP/Core2Duo system, but I built it with a similar Corsair case instead. Is that a floppy drive bay down the bottom right? Not that it would be much use on a modern system but anyway.

you can also get a matching jacket... if you're lucky.

Indeed, the case is a TJ08-E. And yep, you can fit a floppy drive (or a hard disk) in the bottom of it. I had a Gotek in there for a little while, but there wasn't much point.

Do I like the machine? I'd say so, because I built a second one exactly like it. (No, I'm not kidding.)
But damn, I should have been chasing down that jacket instead!

Did you have much trouble finding the parts? I'm finding it incredibly difficult to find this, or a motherboard similar to it in my part of the world.

Did you have much trouble finding the parts? I'm finding it incredibly difficult to find this, or a motherboard similar to it in my part of the world.

Well, the motherboards were a bit of a fluke - Newegg somehow had them at the time, and they disappeared quickly (especially after Phil's video, it seems). Here's a couple of alternative directions on hardware if you're having trouble..

MOTHERBOARDS:
This thread is particularly helpful in narrowing down LGA 775 boards with AGP (along with their CPU support, which can vary widely).

A big potential downside on the ASRock 775i65G R3.0's is the caps - as I look across both boards, I see some suspect (up to 2008 or so, anyway - this board was made circa 2012) manufacturers, in particular the Chemi-con KZG 1000uF units on the VRM input. I have no tangible or visible reason to believe that they are bad or will be bad, but it is a cause for potential long-term concern.

GRAPHICS CARDS: It should be far easier to find AGP-flavored GeForce 6800GT cards. The difference in performance won't be that huge, especially on earlier games.

A modern 2TB spinning disk is a good alternative to the SSD, especially if you fear data loss while the machine is in storage. Partition accordingly of course for Windows 98.