You can overclock with both. From my experience, the 9190914S.ROM has quite a few issues. Random inconsistencies and lack of LBA with my SD adapter. The 9190916S.ROM is much more stable and what I would recommend for anyone running this board. I’ve also noticed the 16S rom has an extra Cyrix 586 feature to toggle over the 14S. Maybe we have the date codes wrong on these?

Is it possible to edit the AMI bios to add control over the PCI divisor?

Alternatively, edit the Award bios to add VLB graphics support back in?

A bit disappointing but not really this cards target platform.

Never tried this card.
Is there something special about it or just anothe PCI video adapter from the late 90ies ?

It’s a rarer PowerVR based card, successor to the chip used in the Matrox M3D, PCX2 I think. It’s similar in design to the GPU in the Dreamcast. The development of the Dreamcast actually delayed the Neon 250 to market, something like a year, and it couldn’t compete, hence low sales and rarity. My card isn’t an original but a remake from the same guy building the Voodoo 6000’s. Very talented guy and his boards are very high quality. I’d buy a 6000 if I could somehow justify the spend 🤣.

On another note I noticed the ARK1000 is DNF on Quake on the latest M919 16s bios. I just can’t stop effing around with this board. I pulled it back out to test my Number Nine Motion 551. There also appears to be a divisor on the VLB bus, which may not be present on the 14s bios. It needs further testing but here are my results with the Motion 551/S3 864 based VLB card.

Flashed back to the 14s bios and Quake is still DNF, just freezes, on the ARK. Not sure if it was a fluke or what that I was ever able to complete a run. I really need to put this board away.

Update 2: come back a few hours later, changed nothing, freezing again in timedemos. So just not consistent with the ARK at this speed.

M919 + Ark1000VL = no love
these two dont play nice together, so not surprised you are hitting issues with them.
s3 Trio64 VLB however works well at all times with 0 wait states.
this mobo is quirky, thats why it tickles you for more.
i got fed up with it rather quickly and not looking for prolonged experience. : )

Thanks for the notes about the Nano.

Both my ARK’s and two Trio64 VLB cards are freezing right here at the moment. At 180MHz anyway.

i think you are hitting thermal issues with the 180MHz CPU overclock.
It is hot right now in USA and without active cooling many Am5x86 processors that can otherwise handle higher than 160MHz frequencies are starting to stall.
At least that's my experience.
I have only two chips that can truly do it with environment temperatures higher than 33-35 C.

Can that be your problem ?

Possibly, but my room temps usually don’t climb above 78F. The Number 9 531 VLB with the S3 868 completes the benchmark no problem, same with most PCI cards. Maybe just something random with my board.

I see.
Not sure what is going on then.

Btw, it will be very interesting to see direct comparison of the 868 and 864 (Trio64) VLB video cards.

I can do that, so the 864 and Trio64 should have identical performance?

Going on pshipkov’s intuition, thinking maybe it was CPU related, I dropped the voltage down to 3.3 and things are working now. This particular CPU has always been sensitive to voltages and early in my testing with the m919 I thought Inhad determined the 4v setting was actually working better. Some benchmarks to follow.

Good to hear you figured it out. 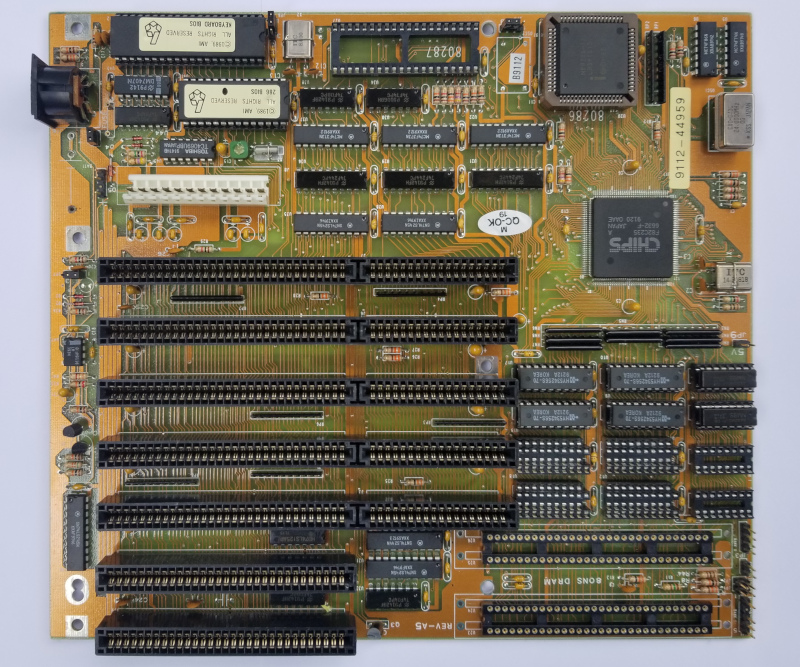 Assembly is of good quality. Well preserved.
Came with 12MHz rated Intel CPU and 640Kb DIP RAM only. Moved it to 4x1Mb 70ns rated SIPP modules.
DIPP + SIPP memory results in no lights. So went with SIPP only.
There is some issue with CF cards with standard IDE interface it seems - couldn't boot to DOS for some reason. XT-IDE card saved the day.

EDIT
In a later post user @WJG6260 provided an AWARD BIOS for this motherboard.
That BIOS allows user to enter up to 1024 cylinders only while the the original AMI BIOS supports much higher number in UI.
This was interesting and hinted at potential Chipset limitation at play.
Most of the time i use 2Gb Transcend CF cards for testing which translates to 3884 cylinders.
Switched to smaller volume mechanical HDD with less than 1024 cylinders = success. No more hanging POST.
Otherwise XT-IDE adapter is the way to go for storage devices with bigger size.
/EDIT

EDIT2
Turns-out the CF-IDE adapter got flaky over time.
All is good with this motherboard, standard IDE adapters and CF/HDD local storage devices.
/EDIT2

It was an advanced motherboard back in its day (i think).
- High-level of integration. Basically one chip + couple of components for glue logic.
- 2-3 jumpers only.
- Fancy BIOS with lots of timing options. Couple of screens for reference: 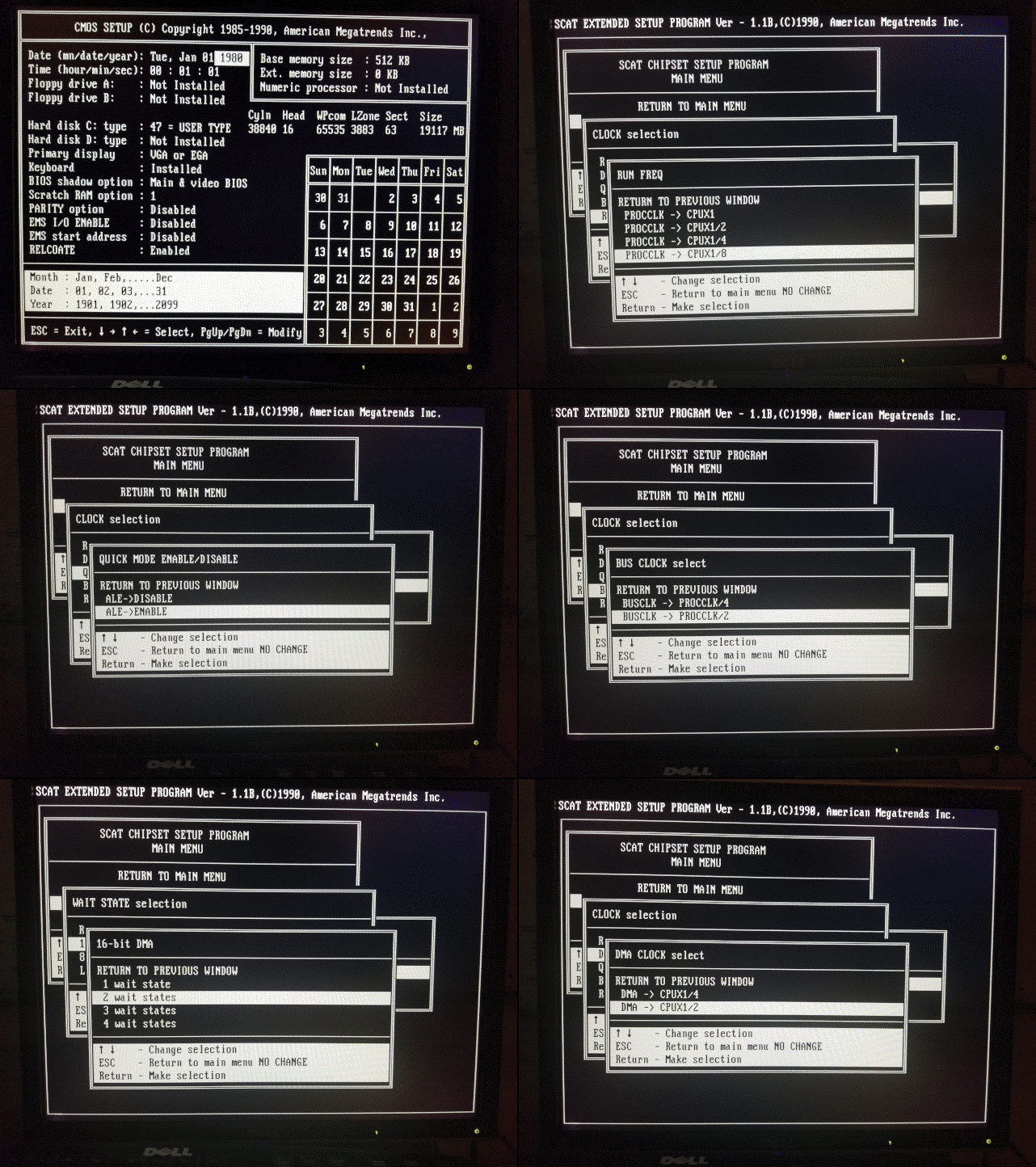 Initially things looked promising but the board turned out to be a clunker. Does not go a single hertz over the default 12MHz.
This was disappointing since quite a few 286 boards can do way better. For reference, the peak currently is at 30MHz @ 0-waits, which results in impressive performance.
Lost interest in further testing.
It works for what it is.
At 12MHz it is not bad on a clock-to-clock performance basis, assuming timings get tightened from the BIOS options.
But be warned - certain configurations can lock the motherboard and it won't power for some time. I had to wait an hour for the stored BIOS settings to go away (no battery) before can power it back again. This feels more like age than by design, but impossible to say for sure.

So it looks like for DOS interactive graphics the next order is in place:
Ark1000VL > N9 Trio64 > Diamond Trio64 > N9 Vision868.
Which is not surprising really, but it is interesting that N9 Trio64 is slightly faster than the Diamond version of it.
I bet it is BIOS related, which leads to the next question - can you share the BIOS please ?

Sure, what is the best way to dump bios? Can I do it without destroying original sticker?

Update 1: Discovered that no FSB jumpers =20FSB, so if I place the jumper on 5-6 that bumps it up to 50FSB but I don’t think I’m getting 1:1 PCI, difficult to know without one of those cards that has a read out for bus speed. But no change between tests if I boot at 20fsb or boot at 50FSB.

if you have eeprom programming device it will be trivial to read the BIOS, but it does not sound like you have one.

small utilities like NSSI or checkit v3 can read the video card bios and write it to file on disk.

i didnt look at 4x50MHz for the M919 motherboard. 3x66 is a no go which demoralized me for further testing.

i thought the PCI bus divider happens past 50MHz, no ?