So I got this Sony Vaio from a local computer store. It's a PCV-RZ26G. It has a 3.06GHz P4, 2 optical drives, a floppy drive, and a video capture card with a TV tuner and video inputs that connect to the the front panel of the system. It has 4 panels on the front that open or are opened by the optical drives. I really like the design of this system. 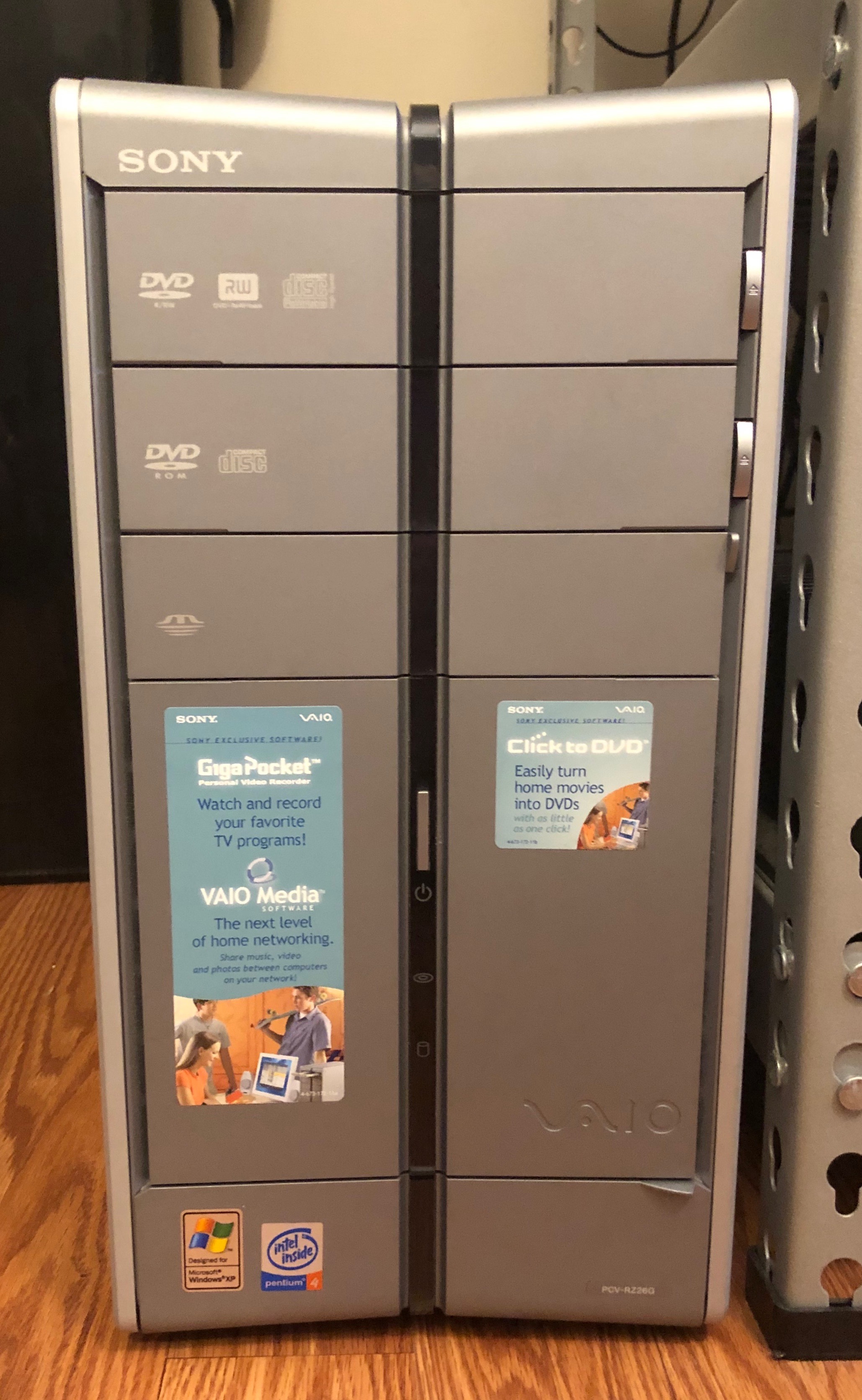 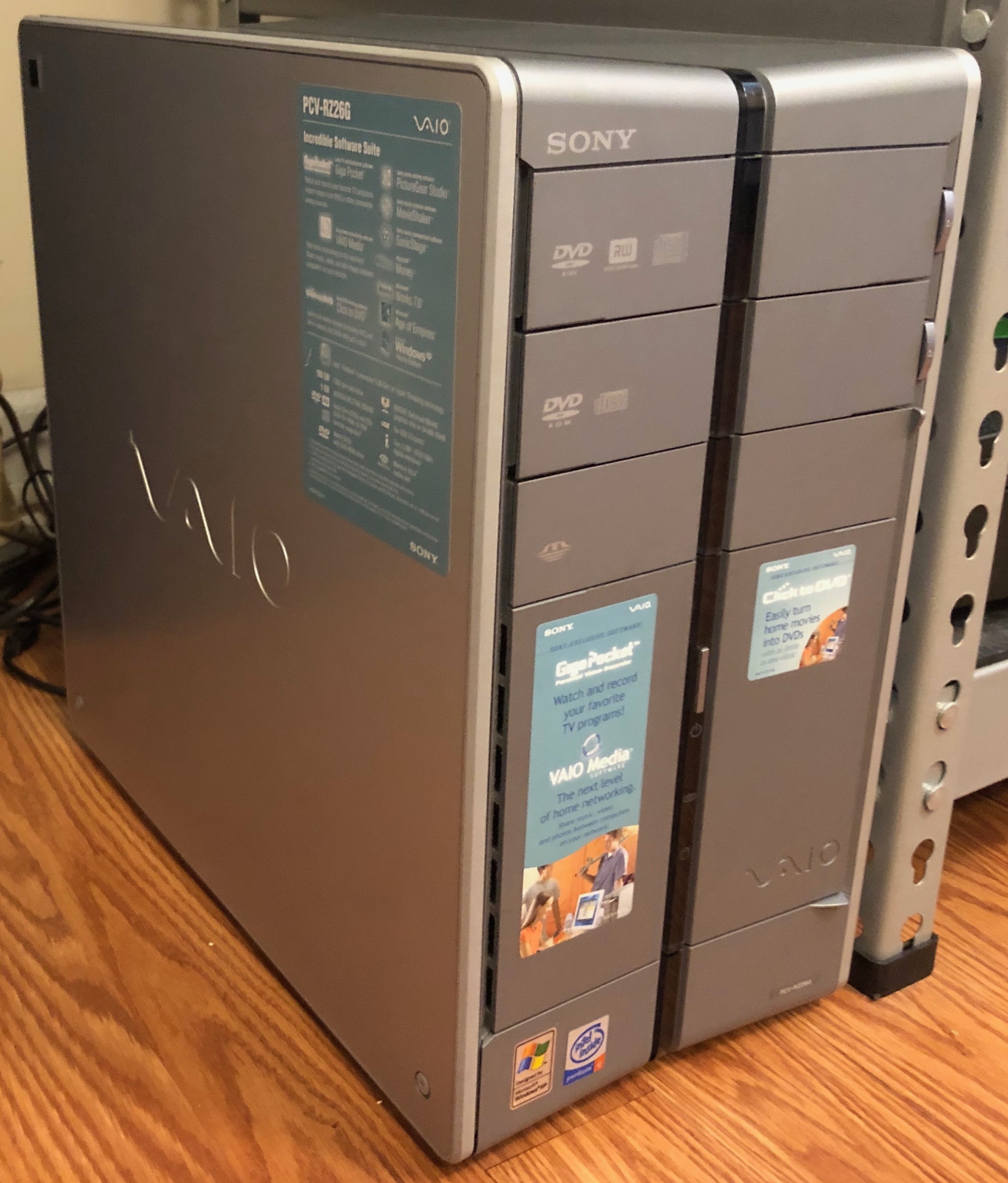 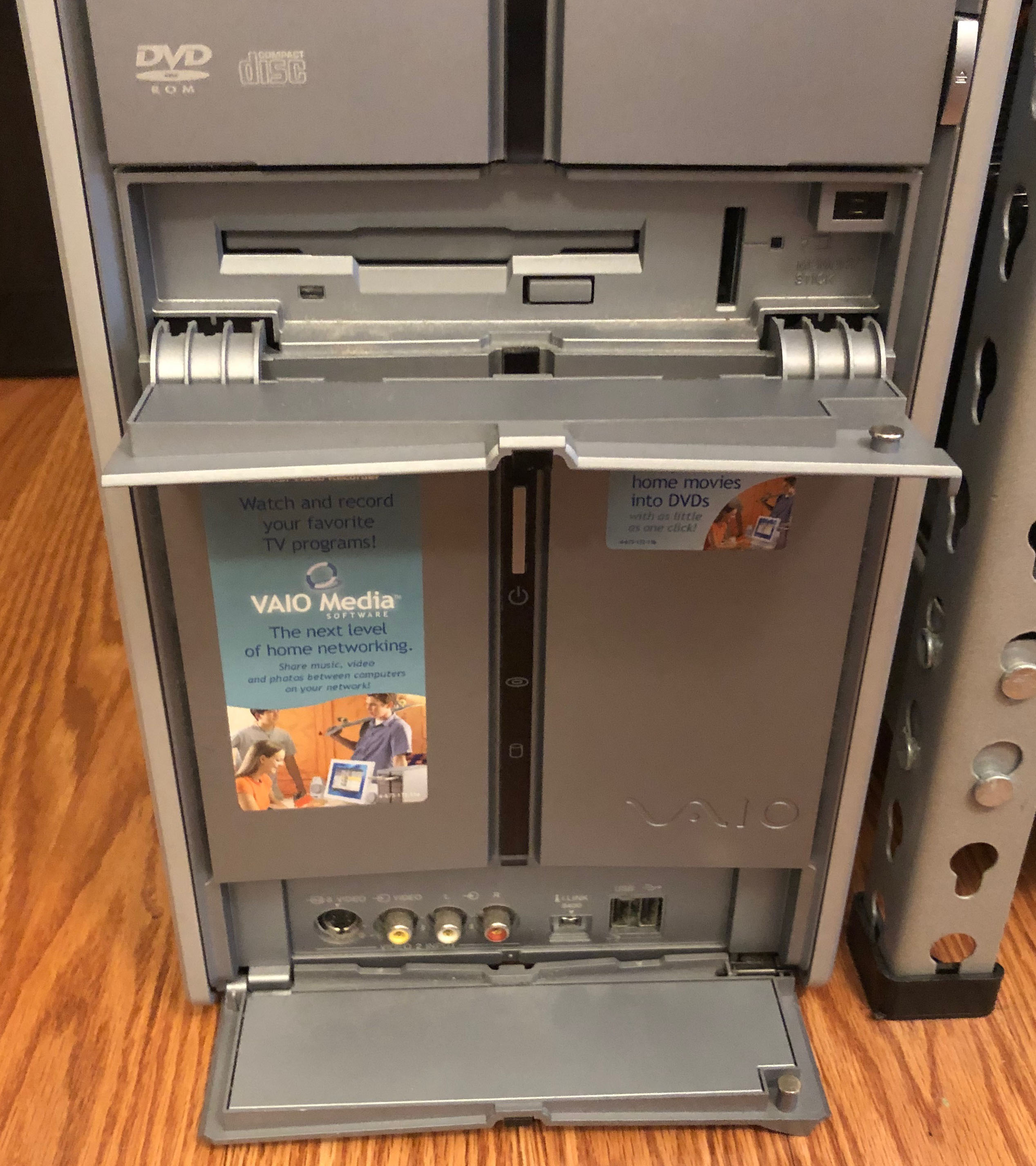 It was lacking some things when I got it: memory, a video card, an HDD, and a HDD mount. The memory, video card, and HDD are taken care of now, but I'm not sure what to do about the HDD mount. I think I'm going to go back to the store and see if they still have the mount somewhere. It also came with a remote, which I saw in the store, but forgot to take with me.

My long term plan, if I can verify that everything works, is for this to replace my other P4 system for Win 98/Me gaming. I've already installed my Voodoo 3, and I'm going to install my Matrox m3D and possibly a Sound Blaster Live! The Vaio has a Yamaha AC-XG (YMF753, I think), but it looks like that probably isn't good for DOS games, so I'll probably end up using the SB Live! instead. I also think I'll probably remove the big stickers on the front at some point; I think it would look better without them. But I won't do that right away.

I've done a little testing so far: I installed the Voodoo 3 and some memory, and booted up the system. It powered on, recognized the Voodoo 3, and I was able to access the BIOS. I noticed something strange when I was looking at the BIOS, though. Just running idle in the BIOS, the CPU was at around 55ºC. That seems a bit high, considering the system is doing basically nothing. I haven't installed an HDD in this system yet, so I don't know how it'll run when an OS is loaded. I noticed that when I first turn on the system, the fans are running pretty high, and then they slow down a lot once I'm in the BIOS. It seems like the fans should be running faster when the CPU temp is that high, but it's hard to understand what's happening here until I'm able to load an OS on it. I'm not sure if 55ºC is actually a high temp for this CPU, either. I bought some memory and I want to wait until that arrives before I do anything else with the system. I also removed the video capture card (which is pretty cool looking, I might post pictures of that) and its cables, since I have no intent to use that any time soon and I need the PCI slots.

Good luck finding Gigapocket and the drivers for it. That will only work in XP

Good luck finding Gigapocket and the drivers for it. That will only work in XP

I know where to find those, but like I said, I won’t be using the capture card (I already removed it), and I’m not installing XP on it (at least not right away), so it doesn’t matter.

Don't get me wrong, it's a cool piece of hardware/software, I just have no need for it right now. I'm still keeping it, obviously.

Does anyone know what a normal idle temp for a P4 3.06GHz should be?

You’re joking, right? I think the maximum temp for this CPU is 69°C.

Very nice looking - is this system RDRam based?

I didn’t realize it was based on an P4S533-VL. My other system that this is replacing has a P4S533. The Vaio’s motherboard isn’t a standard P4S533-VL, though. It’s apparently been customized, like the fact that it has fewer PCI slots and it has a Yamaha sound chip, whereas I think the stock P4S533 boards use C-Media audio. It also has special connectors that are connected to some of the Vaio’s inputs and extra hardware.

That's good to know. So, I guess this system is good to go, except I need to wait for the memory to get here, and I need to go back to the computer store to see if they still have the HDD mount. I'm going to do that tomorrow.

You’re joking, right? I think the maximum temp for this CPU is 69°C.

Clearly was a joke. If any consumer CPU is idling at 84C... there are serious issues going on.

He should check for dust, if the capacitor on the board looks normal and renew the thermal paste.

He should check for dust, if the capacitor on the board looks normal and renew the thermal paste.

I’ve already cleaned out the dust. I didn’t inspect the capacitors really carefully, but just at a glance they looked fine. I’ll look again. Replacing the thermal paste probably isn’t a bad idea.

I went back to the computer store, and they still had the drive holder and the remote. They didn’t charge me anything for them. I’ll post some pictures of them later. I’m really glad I was able to get the drive holder; I don’t know what I would’ve done with this system otherwise. Now that I have those things, I could pretty easily restore the system to the way it was originally shipped, if I want to.

The computer store also had a system with a 433MHz Celeron. I didn’t get it, but if the Vaio doesn’t work out for me I might go back and get the Celeron system. It’ll probably be there for a while.

It's worth mentioning that the BIOS does not really "idle" the CPU, exactly. It's usually a tight busy loop that is equivalent to running at 100% load. You need to get into a modern(-ish) OS with support for frequency control and an idle thread that runs the HLT instruction to put the CPU to sleep until the next IRQ. Then you will see the temperature drop.

So, I've started installing stuff in the system, and I'll show more pictures soon. But for now, I was looking at the m3D as I was removing it, and I noticed these faint lines on the memory. It looks like it could be caused by overheating. The light has to be shining on it from a certain angle for the lines to be visible. Is this something I should be concerned about? What could be causing this? I'm only posting one picture, but both of the memory chips are like this. The PowerVR itself looks fine. What do you think?

I should mention that I didn't notice this before, but I may have just not been looking closely enough, or in the right lighting. 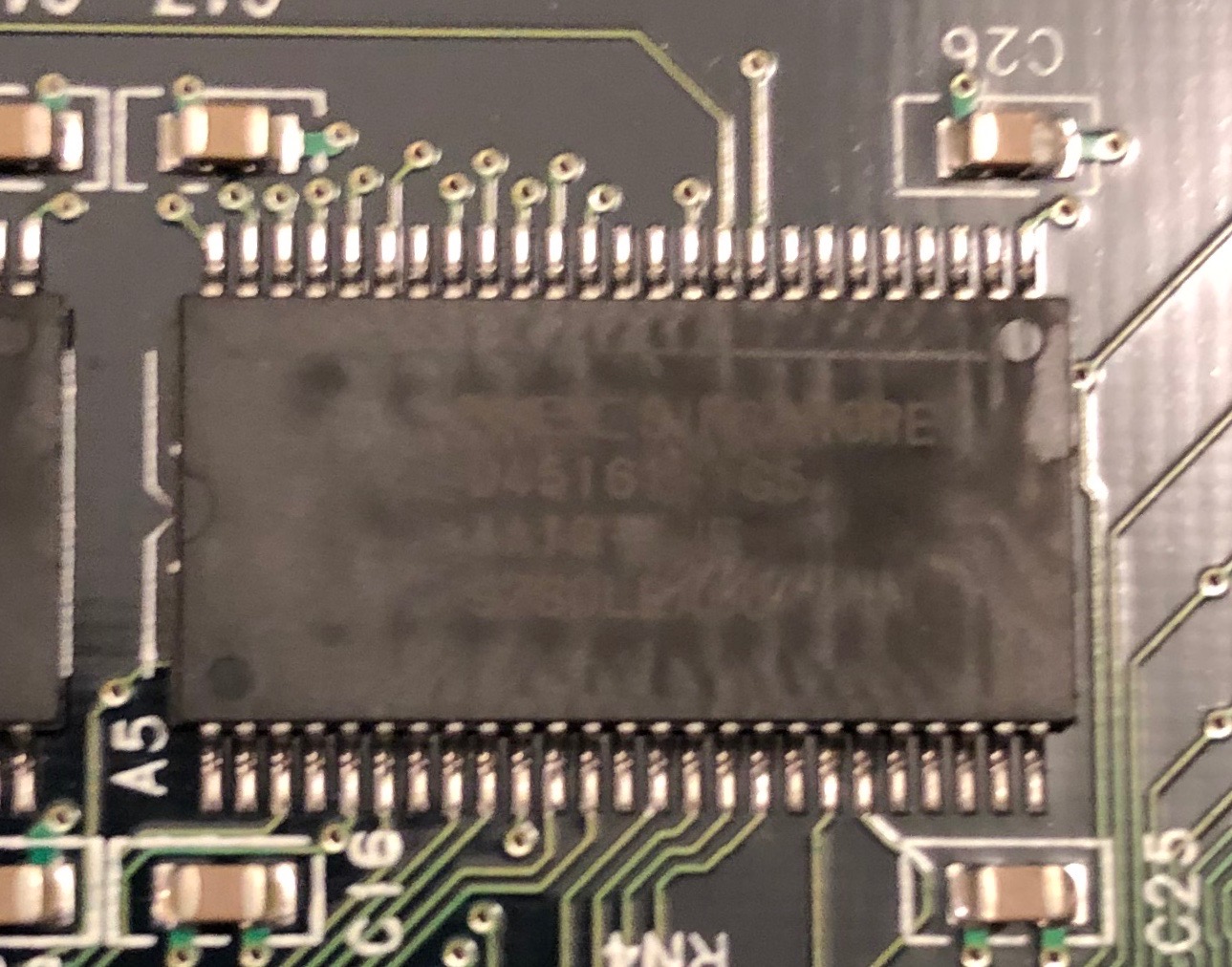 By the way, is anyone having trouble seeing the images? If so, I can change to another image sharing site.

images load fine for me

Does anyone have any idea what the lines on the Matrox m3D’s VRAM means? The issues I’ve been having seem like they might be memory-related, so it makes sense the VRAM could have damage. The main thing I’m concerned about is whether it’s safe to still use it in my system (the Vaio, which I haven’t tried yet) and whether it could damage other components. The other thing I’m wondering is if the VRAM is permanently damaged or if it just wasn’t functioning properly.

One idea I had is that maybe there was a connection issue with the PCI slot (either a faulty slot or I just installed it improperly) which caused an electrical problem with the card.

Right now I’m thinking I’m just going to try it with the Vaio, since maybe this system won’t have the same issue. Is there any reason I shouldn’t go ahead with that plan?

Looks like the paths of the bonding wires are showing thru the outer epoxy package - suppose there could be some form of thermal stress to blame.

Looks like the paths of the bonding wires are showing thru the outer epoxy package - suppose there could be some form of thermal stress to blame.

That's what I thought, but I don't know what could be the cause. Looking at the way I had it set up previously, it wasn't close to anything else that would be producing a lot of heat. That makes it seem like the heat is coming from the card itself, but I don't know why it would overheat like that. Beyond the fact that the paths of the wires are showing, what kind of effect would you expect this to have on the memory, and on the rest of the card/system? Also, if overheating is the issue, why is it that only the memory is affected, but not the PowerVR PCX2 chip? From the outside, the PowerVR seems fully intact.

EDIT: Since the marks seem to follow the paths inside the package, doesn't that imply that the heat is coming from the inside and radiating outwards? If that's the case, then it seems likely it's because the voltage is too high. That kind of makes sense, because I already thought it could be caused by a bad connection. It's also possible that the motherboard has an issue somewhere, which is causing an improper voltage to be sent to that specific PCI slot - or maybe to all of the PCI slots, but for some reason the sound card isn't affected by it. Is there any other reason the memory would be getting the wrong voltage?