I'm currently unemployed (or "between jobs", eh?), so I have lots of time between interviews. Why not make a new build?

It all started with this '99 Palo Alto ATCX case: The great thing about it is that it's a "convertible" case, meaning that it can be converted between a tower case and a desktop. According to Anandtech, this feature made this model very popular among OEMs, so it was used for various Pentium III models by Dell, Micron, Compaq and others: The drive cage is removable, and the motherboard mounting is screwless. All in all, there are almost no screws to be found in this case.

Originally, this machine came with a Pentium IV at 1.7 GHz, but I didn't particularly like that build. So I've decided to make a new one! The motherboard is Asus TUSL2-C with a Pentium 3 1400-S (512KB of L2 cache). The USB breakout panel was a mistake — I forgot that Asus still used a proprietary USB/MIR panel: The GPU is a Gigabyte GF-GV3000D — based on the original GeForce 3. The fan was extremely noisy, so I had to clean it with compressed air, disassemble it using this guide. Added some oil to the fan — it's definitely quieter now, but still far from silent. Creative Sound Blaster Live 5.1 Platinum. Came with a front panel, but without a remote control or things like MIDI cables. Can't say I need either of those, the main point of this thing for me is looking cool and allowing me to play in my Sony MDR-7506 headphones. Well, with all that it's time to install Windows 98SE: I've immediately installed the latest drivers for the video, sound, network and chipset, followed by DX 9.0c, IE 5.51 and Unofficial Service Pack. The issue is that I occasionally get BSODs like this: It mostly occurs when I'm downloading large amounts of data from my home FTP which is why I've tried the following:

- downgraded the Intel chipset drivers to the ones offered on the Asus website for this model. Figured it might be a DMA issue;
- upgraded 3COM drivers from the ones installed by Windows 98 to the ones from EtherDisk 5.4;
- upgraded the BIOS to the latest version.

After that I got a BSOD after playing Jedi Outcast, so I've finally tried some googling: Turns out, these kind of error might be memory-related, so I've run Memtest86. Yeah, both 256MB sticks contained errors. I don't have other matching modules, so now I have three sticks: 256MB+2x128MB of PC-133. Ran memtest with no errors, but I still get BSODs when downloading stuff: This is not a huge issue, but any recommendations would be welcome.

The first convertible case I remember seeing was from HP. Really slick stuff.

Great system.... almost like mine, and with zero problems.

if you ran windows for an extended period with bad memory, there is a good possibility of systemic file system corruption, specifically with respect to the system files

I would slick the drive and start fresh, now that you've identified and replaced the bad memory

Memory is failing me a bit here and there, but I think I had some issues installing via's drivers for the P4M800 based motherboard or I had some issues with stuff being detected or blue screens if I installed the service pack after the chipset driver. I use the 2.1a btw, the 3.6 something would cause even the Intel system to freeze. Just my two cents.

When i built mine(sig)... i just installed the OS, chipset driver, nusb33e, videocard driver + coolbits, DX9.0c, soundcard driver, 2port usb2.0 pci card driver/onboard usb(nusb33e), klcodec, fraps, winrar, acrobat pdf and diskeeper pro, in that order and thats it, no other hardware or update software to booger it up, kept it simple, runs golden with zero issues.

Well, I've reinstalled the system from scratch, picked sesp21 instead of u98esp3 (I'm talking about service packs here) and I'm getting the same issues. Sesp21 is supposed to be more vanilla to my knowledge and it usually gave me no issues on other systems. So I'm guessing the updates are not the issue here.

Usually after I get the BSOD and I press any key as prompted, I don't get the picture back, or I get some colored bars instead of the whole image. I'm starting to think that I've picked the wrong Nvidia drivers — I'm using Forceware 81.98 aka the latest Win 9x driver from Nvidia's site that supports GF3. I see two options:

1) version 8.05 — according to one of Phil's videos GF3 performs best with the first driver that supports this card.
2) version 45.23 (Beta) — the version that is hosted by Gigabyte for this card.

Great looking build you have going there, very much period correct.

If you are not actually fixing a specific issue by installing a specific service pack, then I would recommend trying to skip them next time.

I've had the best luck for both stability and performance for GeForce 2/3/4 on Windows 98SE using 45.23. I don't know if it's the same one you linked, but the one I've used is available on vogonsdrivers -> http://vogonsdrivers.com/getfile.php?fileid=772&menustate=0

I always had a lot of issues with the Forceware drivers.

Heres to giving you a better idea on what Nvidia videocard driver to use for WIN98... https://www.youtube.com/watch?v=HRhm4aGNI3o

Well, I've reinstalled Windows again. Got the «Windows Updates for Legacy Operating Systems (95-Vista)» disk of archive.org and installed only the following: This is not a huge issue, because so far it only affects one game (and even then I'm still able to play it perfectly). Max Payne doesn't give me any troubles, and I've already played through a third of that game.

1) Stability sucks. I had to reinstall Windows a lot. And yes, I haven't installed any service packs since the initial installation — even though a lot of people seem to be using them without any issues. I've also tried different versions of drivers for video, chipset and other hardware.

2) Feels like Asus board is the main culprit. I know, everybody loves Asus. I do, too. Every single board I ever owned was from Asus, from P4PE on my first machine to Z97i-plus on my current one. But when it comes to retro stuff their boards often turn out dead (happened to me three times) or unstable (this is the second Asus board that gave me stability issues).

This is why I prefer Intel-made boards — never found a dead one. They might be slower, don't have as many features or overclocking options, but they sure are reliable. I own five of them, including the Batman, two cheap OEM Marls, Krakatoa and Venus — they all work great. The other option that always works great for me is workstation/server stuff, like my Supermicro Slot 1 board.

3) The noise still annoys me to no end. I've been reading some early 2000s gaming magazines the other day when I've stumbled across an article where the author described using freaking foam to soundproof his case. So I guess, somewhere around that time the hardware got really hot and noisy and I simply don't remember it. I could get some newer fans, but my GeForce 3 would lose its original look for sure.

4) Performance-wise this machine is in the weird place. It is surely faster than my Slot 1 Pentium III@800, but not by a lot. I can play Max Payne or Medal of Honour at high settings, but Call of Duty already doesn't run at high settings? Overall, compared to 440BX I seem to lose a lot of things for not a lot of benefit. The nicest thing about the system is faster data transfers, but I might just get a cheap Promise IDE controller for 440BX.

5) The case is awesome though. I now understand why 2/3 Windows 98 builds on YouTube and Reddit seem to be a Dell Dimension XPS T500. It's pretty small for a full ATX and really nice to work on.

6) Another nice thing is the front panel of SB Live. I'm using Sony monitor headphones occasionally, and the sound output is really clean.

I think I'll move my 440BX system with Voodoo 5 to this case. Maybe even get a SE440BX-2 board and finally source a Slot 1 1000MHz CPU (I wanted that for a really long time). But in the end a high-end Glide machine with some ISA sound seems to be better than a low-end DirectX 8 system.

I've built a similar PC using Gigabyte's GA-6OXT and I can tell you that it is a ROCK SOLID board, be on the lookout for one. My GF3 Ti eventually died though, so I moved to a GF4 Ti4200 instead.

And yes, soundcard noise started to get out of hand around the time GF3/Radeon 8500 came about, and it got absolutely ridiculous around the time GF FX and Radeon 9700 were in the market. Here's what I ended up doing to alleviate the discomfort myself: 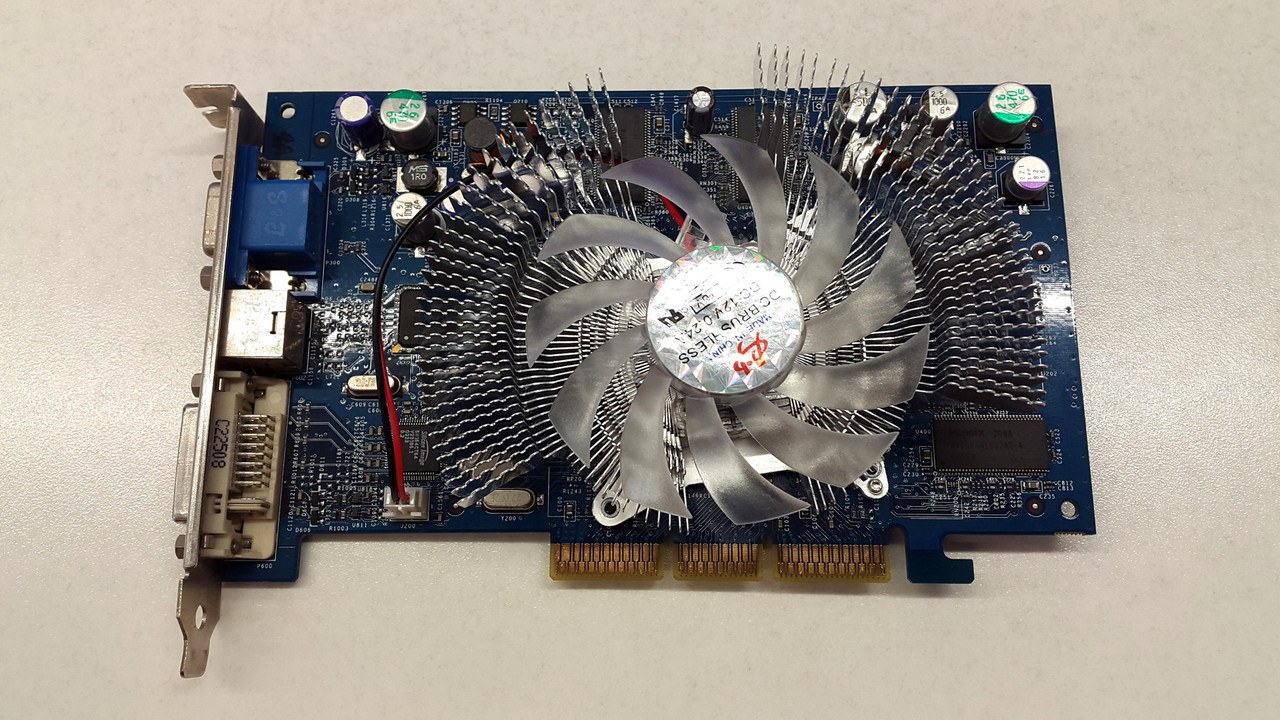 As for Max Payne performance, it was a VERY CPU taxing game in 2001, so even a Tualatin will not serve well at higher resolutions. Although it is technically period correct and installed on my Tualatin PC as well, it runs MUCH better on my Athlon64.

At this point it could really be my karma. I know TUSL2-C is a highly recommended board. My previous bad experience was with P3B-F at 133 MHz FSB which has a great reputation as well. ¯\_(ツ)_/¯

I've got a Asus P3C-E and stability's not it's strong suit either.
Think I ironed out most of the headaches though.
Also got a 1400-S in that.