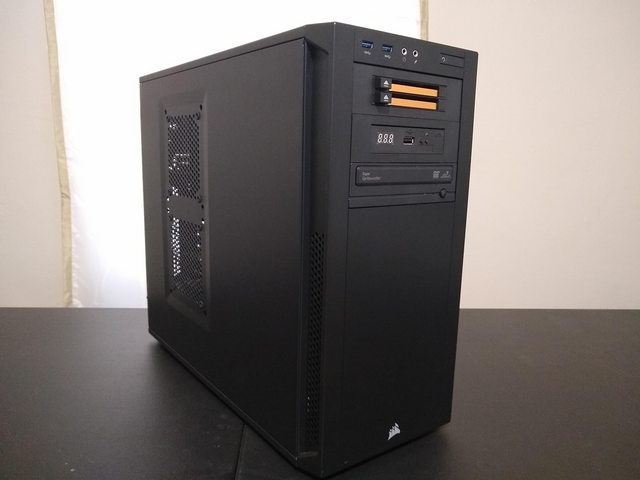 It has been nearly 1 and a half years since I first put together my second retro gaming machine (my S478 Pentium 4 PC), and like with my Pentium 3 system, this system was asking for an upgrade. The case was sub-optimal, and with the modding I had done to it near the I/O shield which removed the paint where I had crimped the metal, it had actually started to rust. The CPU, while decent, well, wasn't the "best" of the Pentium 4s in terms of clock-speed (nick-picking at this point). Also, the one-hard drive solution for both 98SE and XP, while great, opened the opportunity that in the event one of the installs went bad, and I wanted to redo that given install, it would put the other install at risk of having to get wiped.

So, I decided to rebuild the system from the ground-up: new motherboard with the same 865PE chipset as the previous Asus P4P800, but more importantly a new socket - socket 775 (Asus P5P800), a new CPU to go along with it, more RAM for XP, separate SSDs for 98SE and XP (really pulling a Druaga1 here; this actually was almost a no-go if it weren't for a PCI SATA card I happened to have had on-hand in storage that supported both OSes), a new aftermarket GPU-cooler that was both period-correct and more importantly didn't block the SATA ports on the motherboard (it performs just as good as the modern Arctic Accelero Twin Turbo II that I had on my 6800GT, but without being as big), and, but of course, a brand-new higher-end case to replace the crap-tastic budget case that was the Deepcool Tesseract I had. Eventually, I even upgraded the GPU in this new rig to a 6800 Ultra.

Check out my full Imgur album (Pentium 4 S775 Windows 98SE/XP Retro Gaming Machine) showing off this build. If I add to this machine any more (perhaps a 6800 Ultra in the future?), I will update this album.

For a complete list of nearly every part in this build and the cost of each part, check out my "Financial Accounting for Pentium 4 S775 Windows 98SE/XP Retro Gaming Machine" Google Spreadsheet.

Unlike with my upgrade of my Pentium 3 system, the upgrade process was... difficult. Getting all of the parts together and putting them into the new case was easy, but that was the beginning of my problems. Probably the first problem I faced was trying to transfer over the previous 98SE and XP installs on the old incarnation's hard drive onto each of their own SSDs - that proved fruitless. I would have to pull everything I would want off of them, reinstall Windows onto each SSD, and then put the data back where it was in the old install. Not hard, but tedious. Then was trying to have two separate SATA drives in the system. You see, 98SE cannot boot if your SATA/IDE configuration in the BIOS is set to "Enhanced Mode," because it cannot handle the non-traditional assignment of 2 IDE master/slave pairs + 2 single-drive IDE devices by the BIOS; instead, 98SE requires "Compatibility Mode" to function, which forces the BIOS to either one SATA + IDE port, or only both of the IDE ports on the motherboard. This prevented me from plugging in both SSDs into the motherboard's two SATA ports, let alone use the IDE optical drive at the same time. Thankfully, the addition of the Adapter PCI SATA card I had in storage solved this problem. I would still have to use "Compatibility Mode", but because the PCI SATA card takes care of 98SE's SSD, everything works out, and there are no issues to speak of.

Finally, the last "problem" (more of a concern) I encountered had to do with how 98SE and XP created their partitions. Both OSes existed before SATA SSDs and SSDs in general were really a thing for the consumer (that goes without saying), so when they create their partitions, they don't "align" the partitions properly, in addition to who knows what else (the subject of disk geometry is confusing to me). So, in the hopes of both extending the life of the SSDs and perhaps getting better performance out of them, I decided to format them under Linux Mint using gparted (and then in 98SE's case using fdisk to mark the partition as "active). Sure enough, gparted knows what SSDs are, and both disks are properly "aligned." How much this helps, I have no clue, but it probably doesn't hurt.

To further extend the life of the SSD XP is using, I then proceeded to tweak XP's settings - disabling prefetch, increasing disk cache size (if it wasn't already enabled), disabling disk defragmentation and the background moving frequently-accessed files to the start of the disk (https://www.prime-expert.com/articles/a06/per … based-netbooks/), and basically disable indexing of files on the drive (I didn't out-right disabling indexing in "My Computer" on the off-chance it might help; I just made it so XP indexes like zero files upon boot-up, reducing the time it takes for me to actually begin using the OS) (https://www.techrepublic.com/blog/windows-and … -the-right-way/).

As for the gaming experience on this new machine, well... it's probably barely a noticeable upgrade over the old incarnation when it comes to in-game performance. I'm sure the extra 400MHz and the newer Prescott 2M architecture helps, but how much is beyond me. Likewise, the bump up to a 6800 Ultra should help a little too, but again, the performance increase would be relatively small at best. However, synthetic benchmarks are sure to show. 😁

At this point, the only two things I can think of to make this RGM even faster is a Pentium 4 3.73 Extreme Edition CPU (SL7Z4) OCed to maybe 4.0GHz if possible, and a Nvidia GeForce 6800 Ultra Extreme Edition, both of which I'd imagine the chances of me finding either for a "reasonable" price, if at all, to be worse than winning the Powerball lottery. Therefore, unless I strike it lucky, this build is essentially complete. 😁

What's a post about a retro PC without some benchmarks, eh? Along with the 3DMark results for the 6800GT for both incarnations of this machine as well as those for the 6800 Ultra, all with the percent differences listed, I'll include some disk benchmark results, like I always do. However, unlike previously, in addition to including results for the 3DMark benchmarks with the settings "maxed-out," I'll also include "default"-settings run results, so that these numbers are more comparable to other benchmark results people have gathered (if you want to see want "maxed-out" settings look like, check the Imgur album linked above).

Here are the 6800GT results, both for this incarnation and the previous one:

Next, here are the 6800 Ultra results, with comparisons to the previous, recent 6800GT results:

Regarding the newer 6800GT 3DMark results, it does seem that the newer, faster Pentium 4 has indeed demonstrated an improvement in performance, mainly in the older benchmarks that are so blown-out of the water by the hardware that any rather significant bump-up in hardware makes an impact. Comparing the .3dp files of the "maxed" runs from my original P4 machine to this one, there is indeed a noticeable increase in FPS, with a massive FPS-difference between the systems in "Game 1 Car Chase," respectable improvements in "Game 2 Dragothic" & "3 Lobby," and no change in "Game 4 Nature." It is only in 3DMark03 and 05 does the system see no real change in benchmark results, probably because the benchmarks are GPU-bottlenecked at this point.

As for the 6800 Ultra 3DMark results, though, one could argue that the step up to the higher-tier card was not really worth the doubling in cost, at least for 9X gaming. There was virtually no difference between the cards in 3DMark99 & 2000. However, under XP, the difference was more pronounced, especially in the later, more demanding 3DMark03 & 05 benchmarks. I'm sure I could extrapolate this trend to a 6800 Ultra Extreme Edition and say yet again that under 9X, there'd be no real uplift, while the opposite would be true under XP. I'm guessing those 9X benchmarks, and perhaps by extension 9x games, are already so thoroughly destroyed by the 6800GT, that the higher-tier cards can't do much more to them. 😁

Onto the disk benchmark results. Since both SSDs are identical, the determining factor for these results is where they are plugged in (ether straight into the motherboard or into the Adaptec card). The XP SSD is clearly maxing out the SATA I port, which have a theoretical maximum of 150MB/s. The 98SE SSD, on the other hand, makes apparent that the Adaptec card is not capable of meeting SATA I speeds, most likely due to PCI limitations (please correct me if I'm wrong). Regardless, both SSDs far outpace the hard drive that was in the old incarnation: 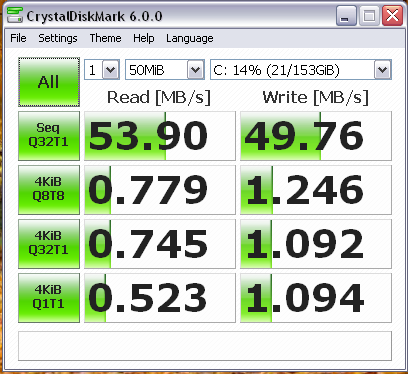 If you want to see the complete results of all of the graphics benchmark runs I ran (which are saved to the ".3dp" files which can be viewed in each of the benchmarks' respective "Result Browsers"), you can find them in the public Google Drive folder of mine named "P4_S775_RGM_Graphics_Benchmarks" (for the 6800 Ultra results) or "Old P4_S775_RGM_Graphics_Benchmarks (6800GT)" (for the 6800GT results). In either folder, you can find the associated ".3dp" and ".3dr" files for each benchmark, as well as a file named "GBQRDT.txt", which lists the results for all of the graphics benchmark runs for the given config of the system as listed above.

If you want an offline version of the 3DMark2000 Result Browser, you can find a copy of the installation executable here in my Google Drive, straight from Futuremark's servers (find out more here 😀).

If you want to go to where I store anything I have linked from my Google Drive here click here. That link will take you to the "root" directory I created to store all of my "public" files and folders for this post of mine.

Nice tidy rig, similar to mine, even have the same cd drive, although I'm still using the Asus P4P 800-E socket 478 board.
To get around the SATA limitation I had what I thought was a moment of genius 1/2 way though the build, Use the on board RAID controller for WinXP, even just 1 disk in a "JABOD" config works fine
P4P800 End of Win98 Support Build

Wouldn't be surprised if my software raid takes a performance hit vs your real hardware card though.

Not a bad rig - love the Corsair RAM. Some suggestions, though. One, there's no need to disable hyperthreading for 98 (or XP for that matter). 98 runs just fine with HT enabled, and can even run on Core2 CPUs on an Asrock 775i65G R3. I mean, I know some software of the day performed slightly worse with HT enabled, but probably nothing significant.

Also, while the rloew patch surely works, using HiMemX works just as well. Just download it off of SourceForge, throw, say, himemx.exe into C:\WINDOWS and add the following to config.sys before you finish rebooting to complete the 98SE install:

where "MAX" is the amount of RAM in megabytes you want 98 to "see." You don't have to worry about anything else after that.

Nice build mate, case looks much better than a Deepcool Tesseract, my P3 is currently sitting in one and I hate it 😜

Yeh think I found out that HT was just ignored in 98 after a while, but I could not get the system stable with the himemx trick after installing the sound or graphics drivers.
The ram is main reason this build still exists, its a bit redundant if I'm honest. Early Win9x games are happy on my P3 1Ghz and later ones that do benefit from the faster specs work fine in XP anyway. but the flashy ram is just so cool I cant bring myself to part it out.

... but I could not get the system stable with the himemx trick after installing the sound or graphics drivers.

That's a bit strange. Never had an issue with HiMemX yet. I feel like something else is at fault. Just a hunch.