I like odd systems. You can tell as my other PC builds are Socket 4 P66 and NexGen Nx586. 😊. However, I always wanted to build a `91 i486 DX-50 system. There is something fascinating about that once ultra-expensive CPU that was a king briefly and become unwanted when the local-bus came a few years later. Let's build a computer around it.

FTC 486EISA motherboard. Must have cost a fortune back in 1991. It has more ICs on than all my other boards combined. Incl. 2 Dallas chips (which I had to replace). Looks really sharp. I love just looking at this board, let alone running it. 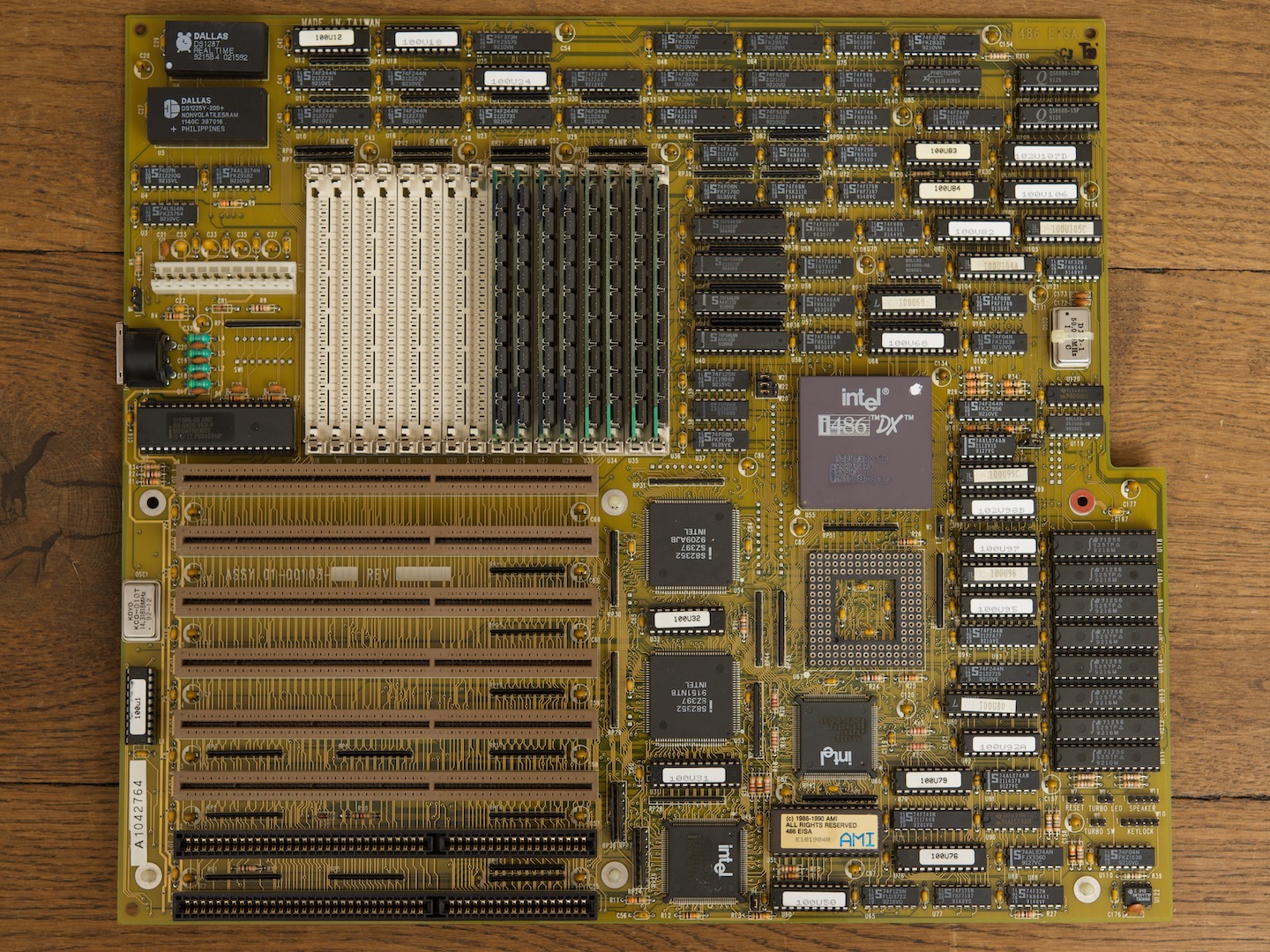 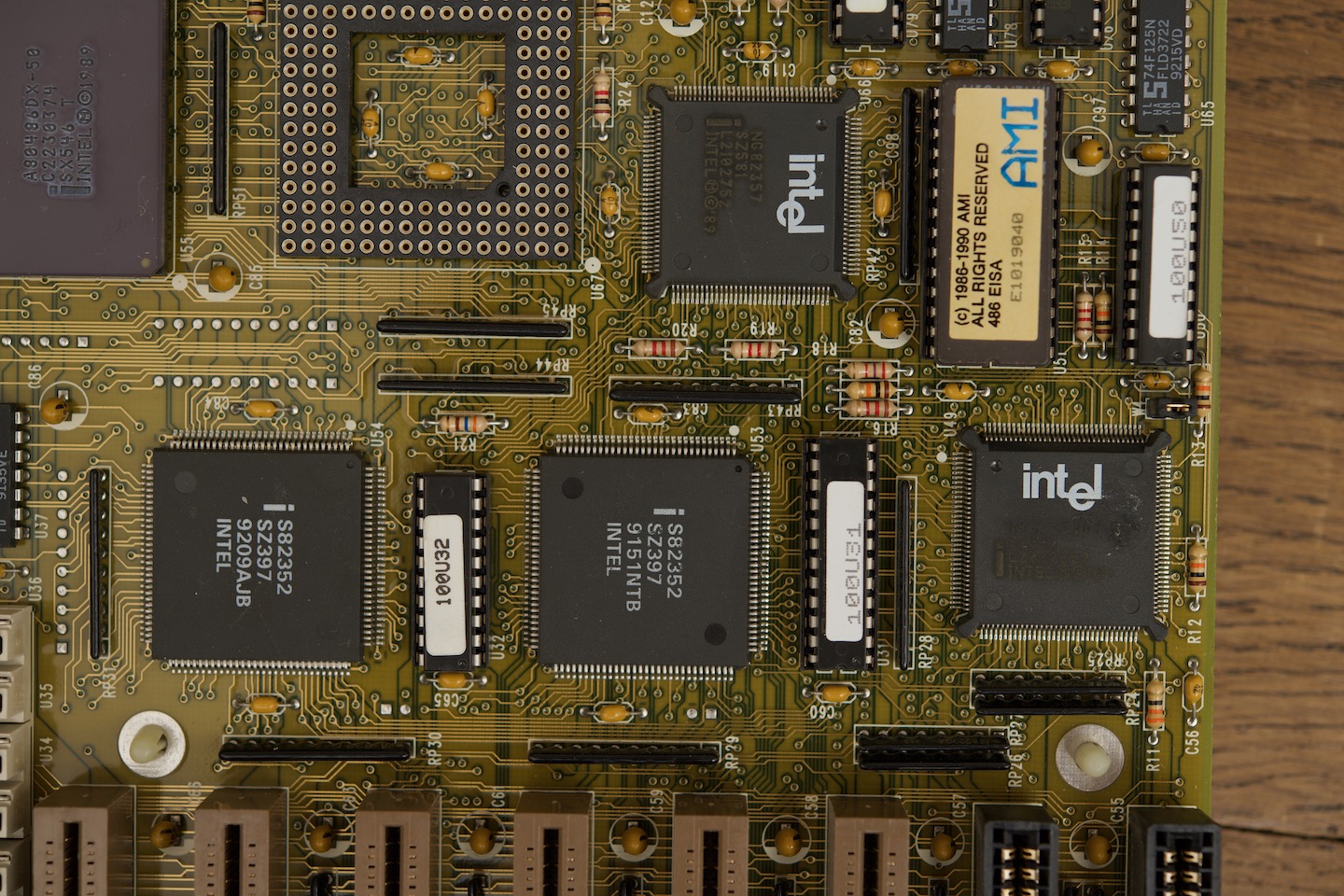 Here's the CPU. Note the empty Weitek 4167 socket in a short walk waiting for an upgrade. I'd love to have two FPU's in a computer... 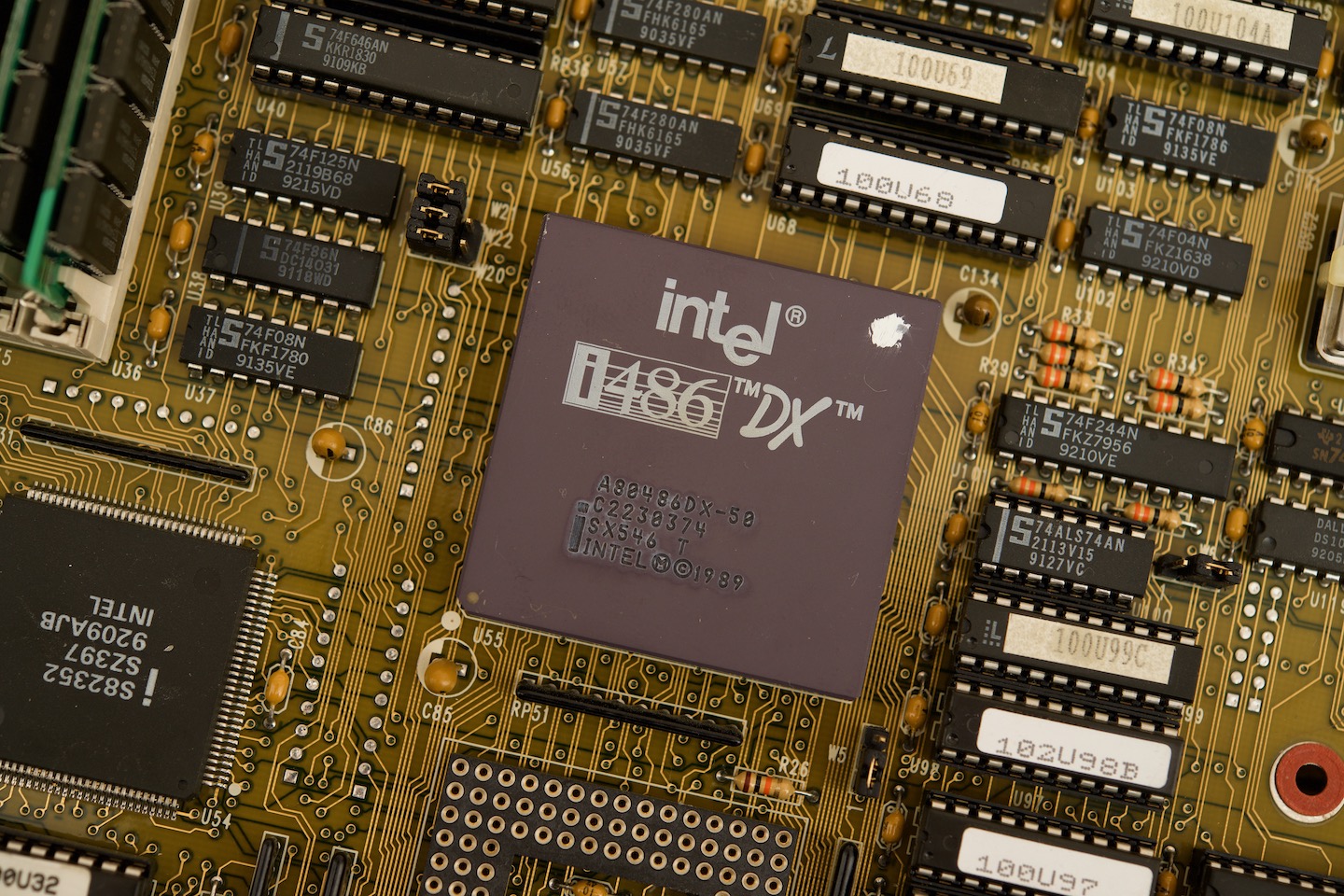 Also a plenty of free SIMM socket. For now 32MB of parity 36-pin RAM is more than enough. 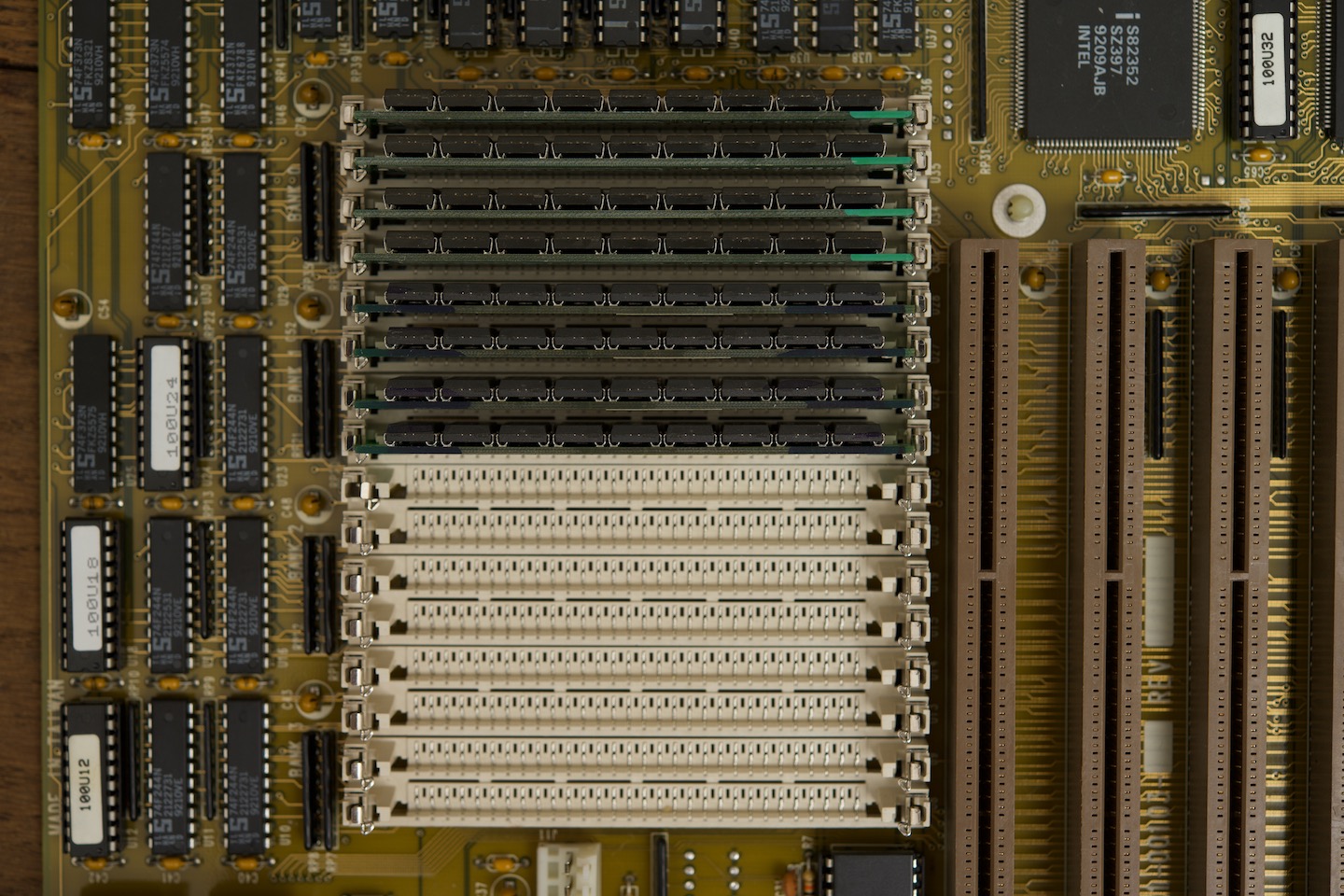 EISA cards are uncommon and the only one I have is this convertible S3 828 based ISA/EISA Elsa Winner 1000. I love its design and the fact you can simply move it between different bus systems by just turning it around. Just need to find some spare ZIP VRAM modules to upgrade from 1MB to maximise its potential... 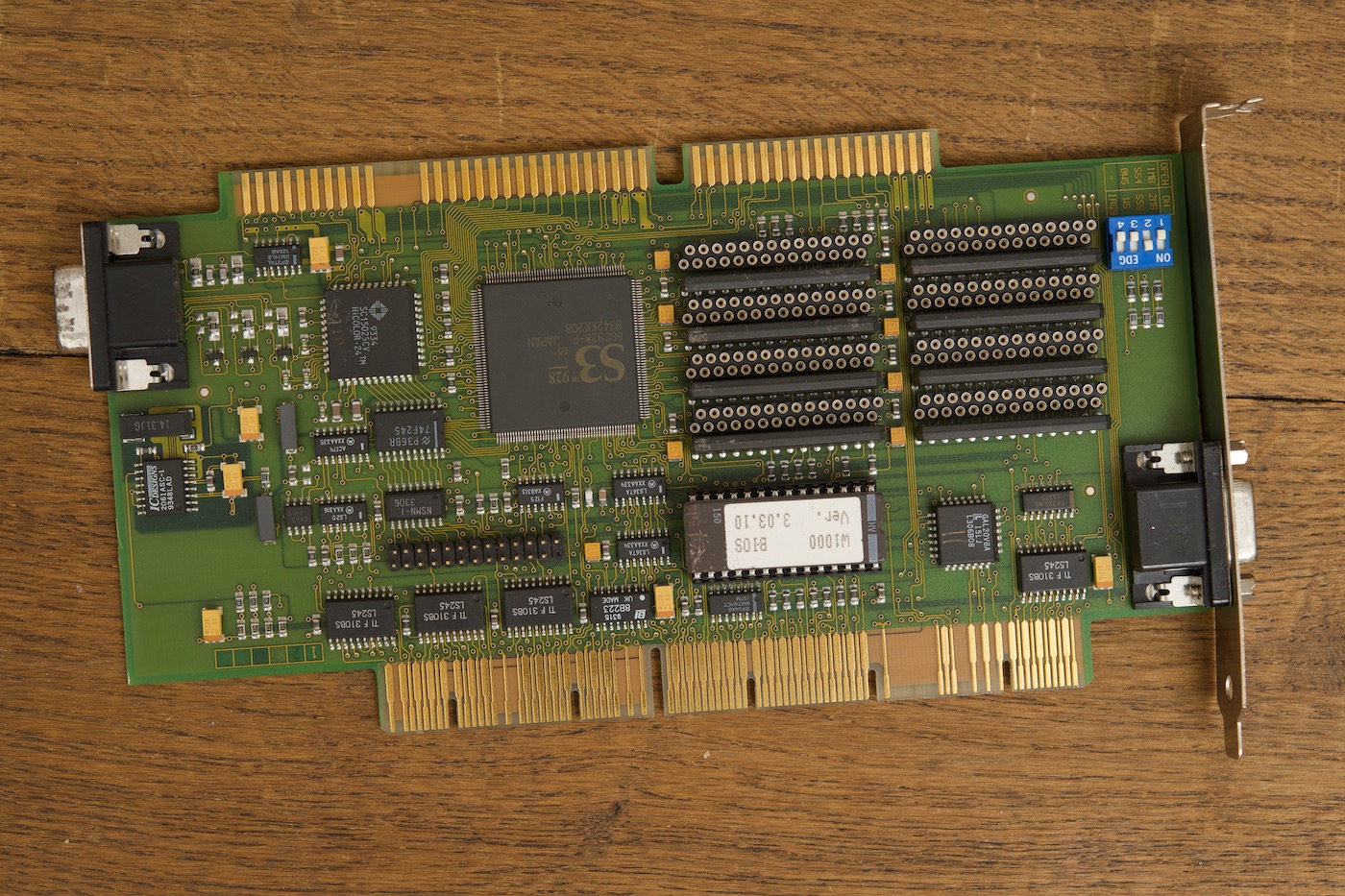 I will be using this DPT PM2022 with CM4000 cache module daughterboard as the main HDD controller. For now there is a single 16MB SIMM. I'd like to eventually add more if I can find parity SIMMs compatible with this one. 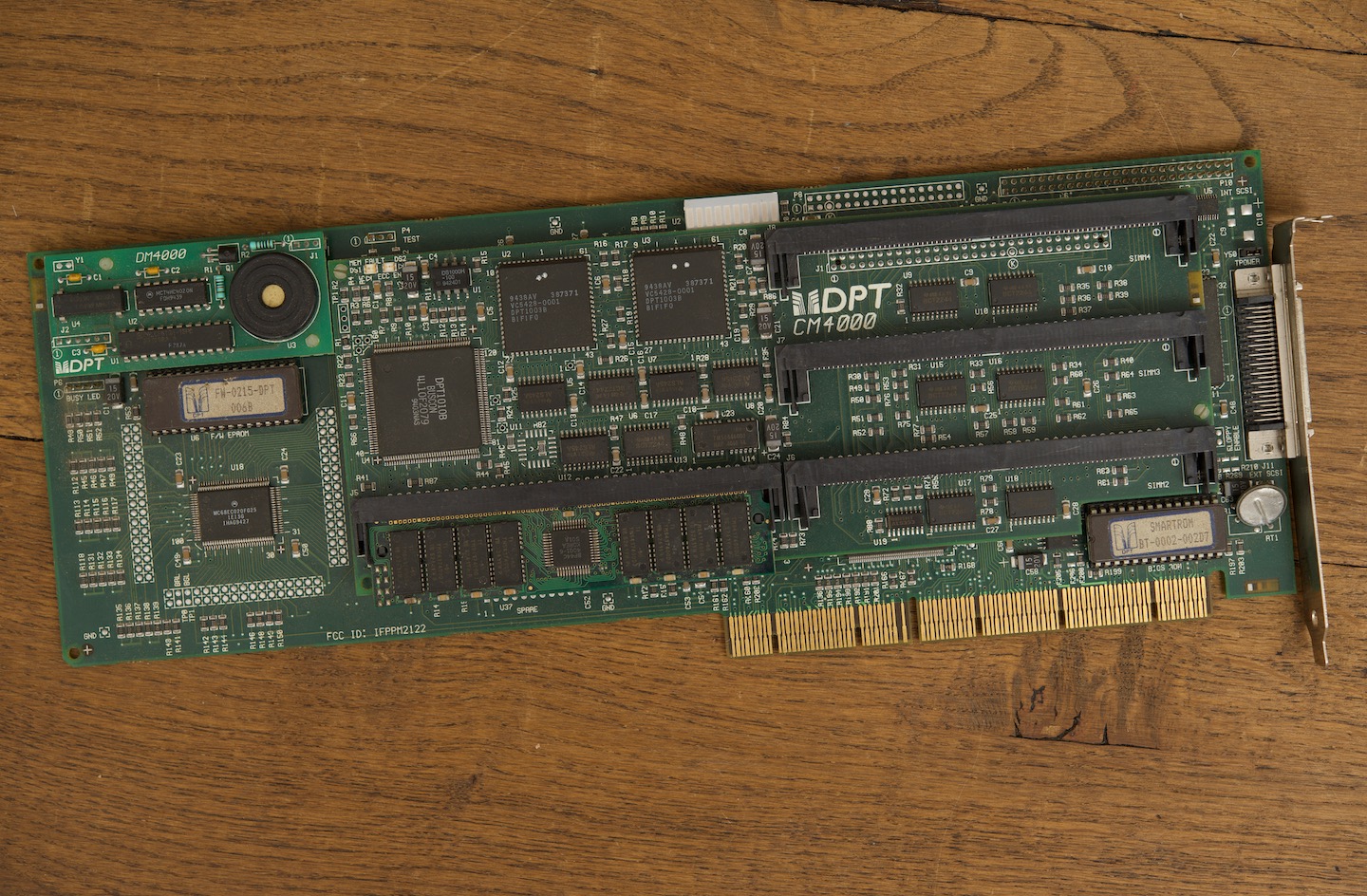 Unfortunately, there is no floppy port on the DPT. So let's not leave this Adaptec AHA-2742AT in the drawer. Will provide floppy port and it will be interesting to see what will be the performance like compared to the mammoth DPT. 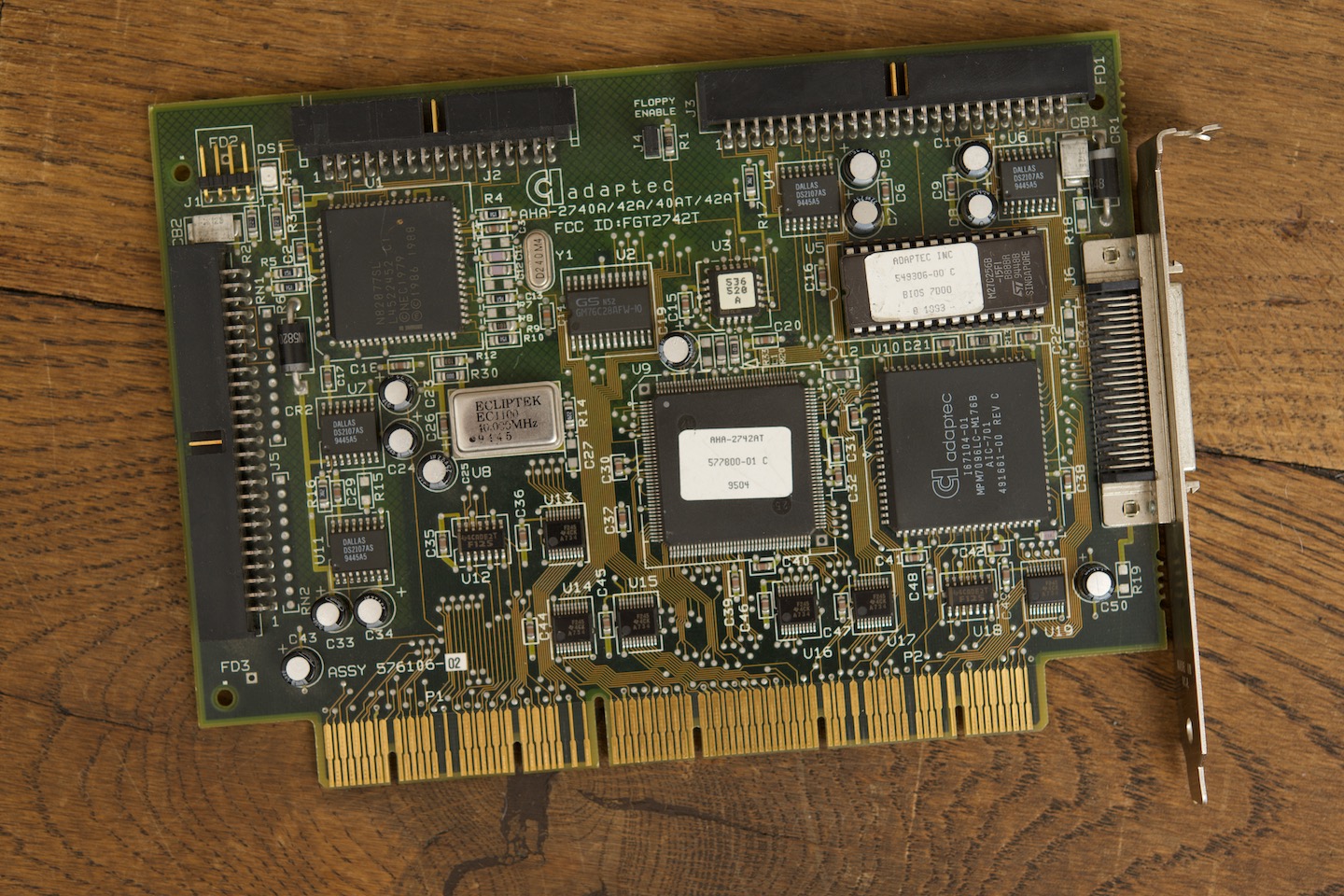 As a medium I love using my SCSI2SD v6 with modern card which should outpeform buses in this system. I know it is a compromise but definitely more practical than 1991 SCSI HDD... 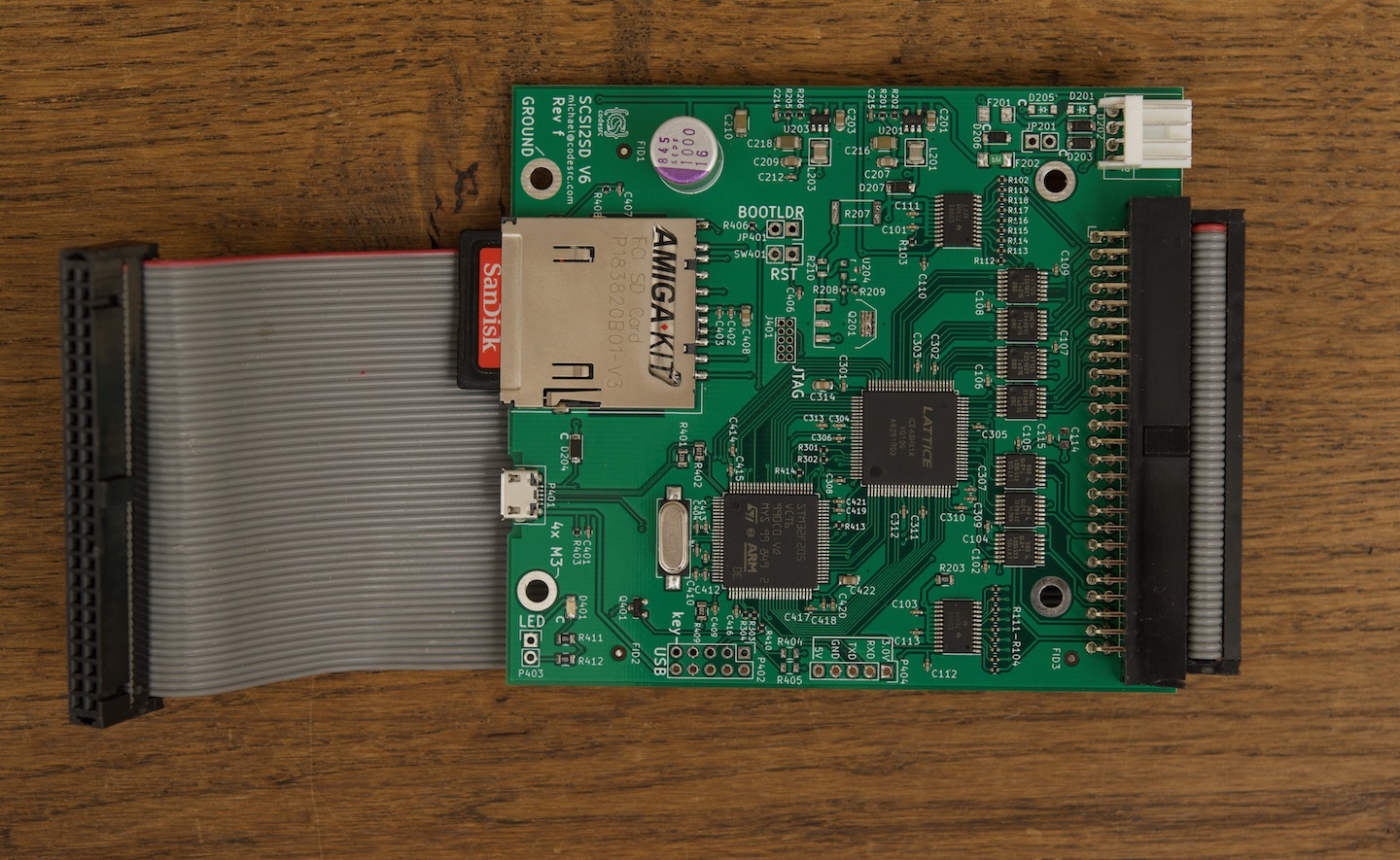 Let's put this 3Com 579TP in EISA. I'd love to have a 100MBit card. Ideally a HP 100VG AnyLAN in this system. I will install this one for now until I can get my hands on one. 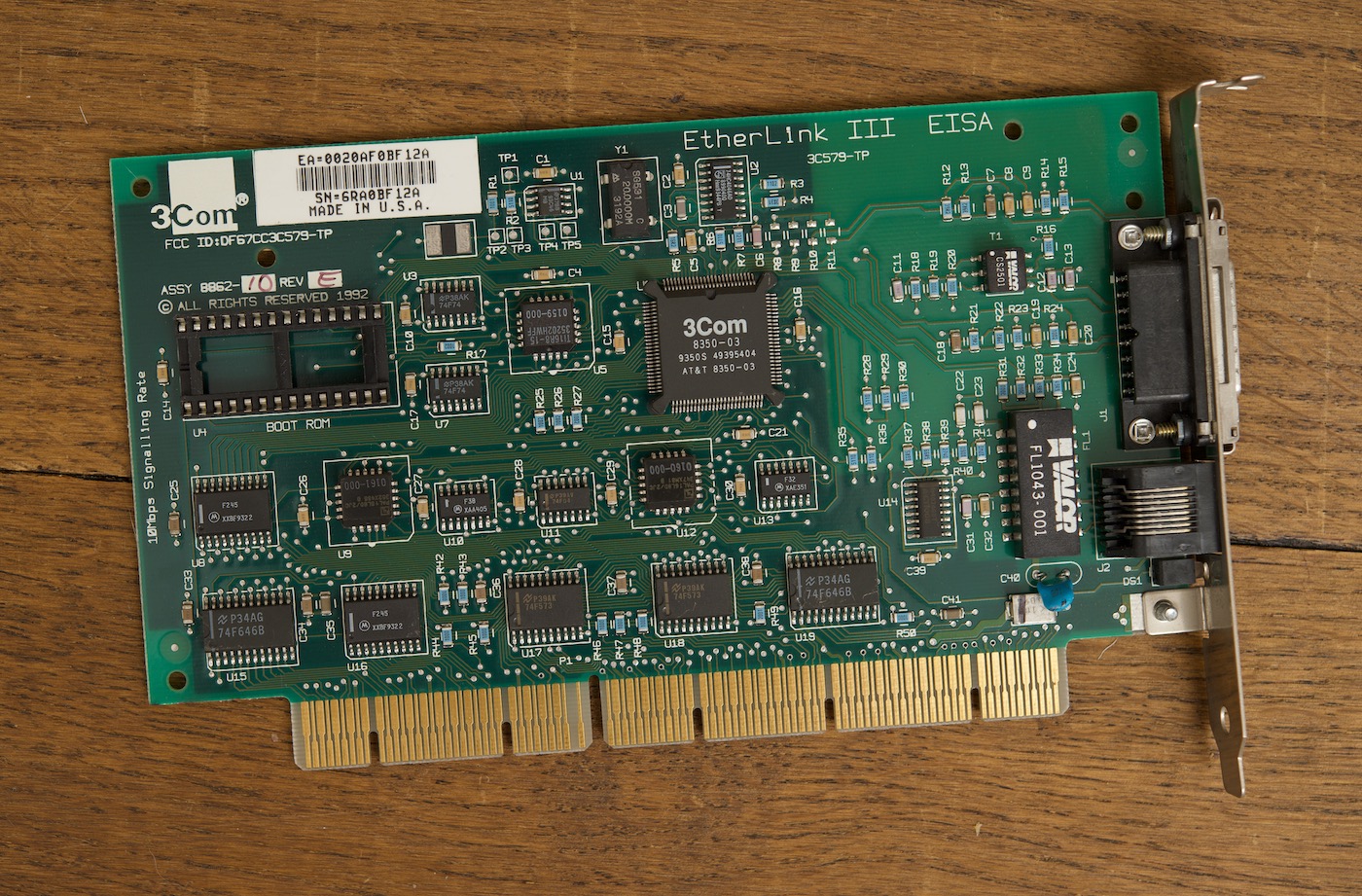 Not that I plan to play games on this system, but I don't have any use for this SB16 and it is period correct, so let's fill one of the two ISA slots with it. 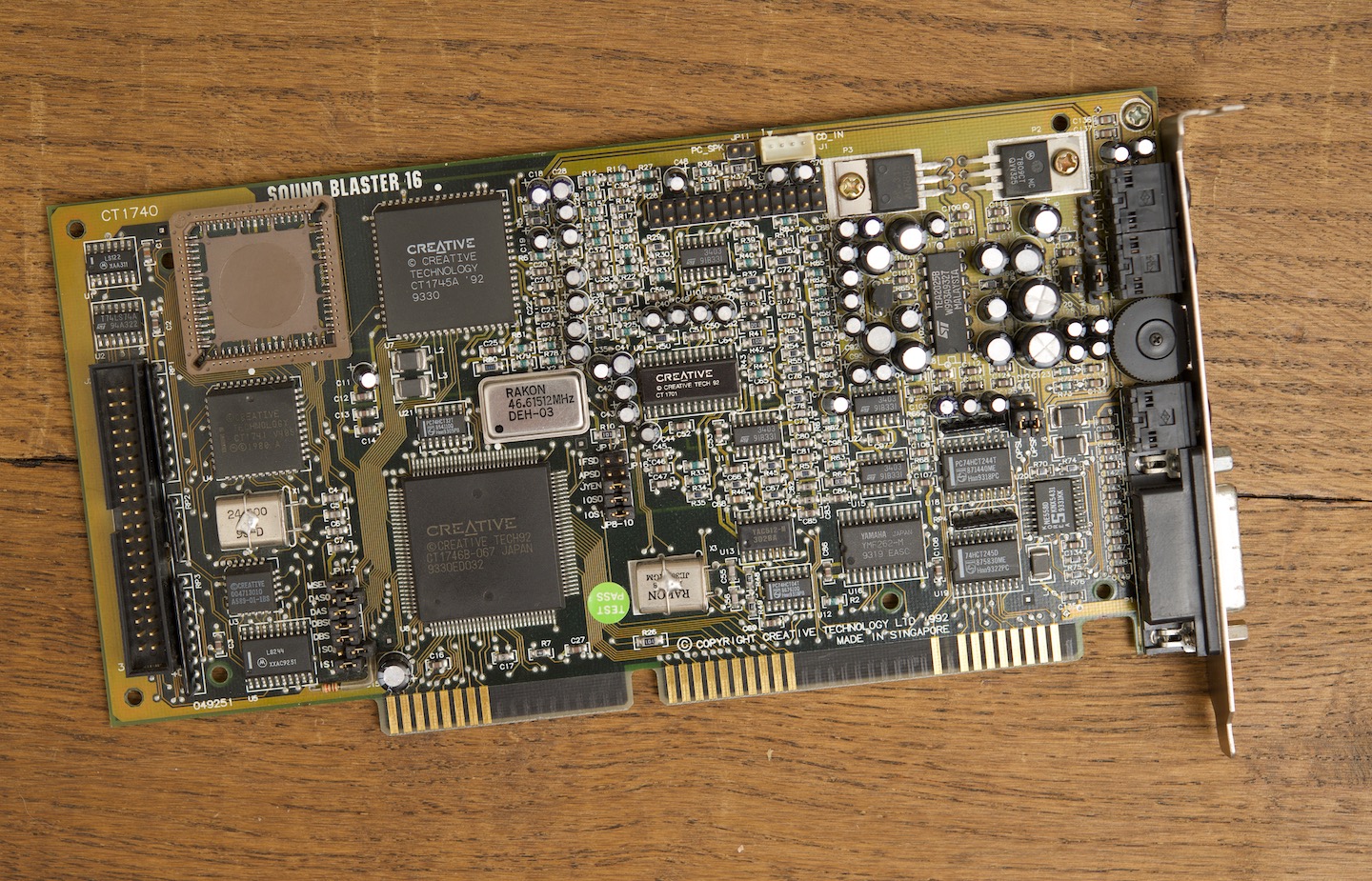 [*] Case. Probably a full-size tower would suit it the best
[*] Serial port for mouse. Don't want a multi-IO controller. Probably will look for a simple UART 16550A board.

Never owned EISA mobo.
It will be great if you can post some performance metrics.
Otherwise - this looks like it will be quite an interesting build.
Keep us posted !

Looking forward to following this thread 😀
I were always curious about the DX50 but when I finally managed to save up enough cash for a new computer the DX266 was out...

Would be interesting to see how your system compares.
However, as mentioned in my post, it doesn't beat a 486DX2-66.

One of my earliest computers from back when was 486 put together from repaired sis 461 VLB motherboard that someone damaged traces and processor was a gift for me from a guy in my hometown for my college. This was AMD 486DX 40. Got the Tseng ET4000 w32p hercules VLB. One of my most successful overclock was 50MHz. Played Doom rather well.

this build is fucking rad, love the discreet logic on the motherboard

Thanks. I will definitely post some results once the system is tuned. For now I am investigating some low VGA scores. Surprisingly the Winner 1000 cards returns identical or even little lower scores in EISA slot as opposed to ISA (and unsurprisingly well below an average VL-Bus card). I'd expect it to be the other way around. So investigation and ECU hacking ongoing...

Reply 7 of 24, by Anonymous Coward

I wish I could see the pictures, but they are blocked by the great firewall of China.

I seem to have a similar experience with the Winner 2000 in my VL/EISA 486 board. Not sure if the problem it the bus or the card. Try a Compaq Q vision maybe.

What advice would you give to some looking to build an EISA card based computer ?
I know most cards are hard to find and expensive.
What cards work vanilla with Win95b/Win98se ?
Is it hard to get to work in DOS ?

In general the main problem is that all cards need to be configured before they can be used. So you need to boot from floppy, run ECU (eisa configuration utility) that works with the motherboard and supply a .cfg file for the card you want to use and assign resources. Once you do that and save it to NVRAM the card is initialised at boot and can be used.

With Windows 95 the limitation is that EISA isn't fully compatible with their take on plug£play. Windows can usually see the EISA devices and read configuration, but you won't be able to change settings like you can for ISA P£P or PCI cards

I guess EISA is more suited for DOS or Windows 3.1 environments.

EISA cards (controllers, NICs) aren't that rare. It is only EISA VGA cards that are rare. Presumably it's because EISA was targeting primarily servers where graphics performance wasn't that important. So the market even when EISA was a thing was tiny.

Where can one et these config files?
Is there a website ?

The .cfg files came on floppy disk with drivers.

VERY cool rig! I had zero exposure really to EISA and Microchannel, and I find this fascinating to learn more about. Thanks for the pictures and the details.

Pretty awesome build.
Controller cards with the cache upgrades are always cool, even if not that uncommon in the enterprise sector.
but that video card! I've NEVER seen the duel bus option like that before, I love it!

There's also the Winner 2000, which is the same card but with 4MB VRAM, and also the ATi 8514 Ultra (not the Graphics Ultra), which was ISA on one side and MCA on the other.

I've always wanted to build a EISA system but I've never come across an EISA board in my retro computing adventures and they always seem to be overly expensive or are of some proprietary form factor without a case on eBay. I'd love to test out this ATI Mach32 EISA video card I've had kicking around here.

Most of the EISA boards were proprietary because the OEMs were the ones pushing the standard.

The only EISA machines I have are Compaq Deskpro XL systems, a 486DX2-66 and a Pentium Pro.
Thing is, they have PCI as well.
So it would be a downgrade to use EISA cards 😀
Besides, most of the functionality is integrated on the mainboard (via PCI), such as LAN, SCSI, IDE etc.

Nice build. I might have a spare EISA Anylan, if you have a matching hub/switch (Anylan is not compatible with Ethernet) otherwise you need to look for a 3C595 which is quite rare. I probably have a PM2022 with floppy as well but recommend to use a wide SCSI controller if you really want to use the RAID functions. Besides some common boards like the Adaptec controllers, 3C579 , Compaq Qvision, EISA boards and cards are hard to find meanwhile. I started collecting 20 years ago when some of the equipment was still in use. Really time to get my website up and runnig again...
eisapc

Loved reading about this, thanks for the info! I just bought a EISA system myself and I am learning to use it.
I have a DX50 as well with Mach32 EISA VGA card and EISA SCSI card with CDROM and 2gb SCSI HDD.
It also has a crappy Vibra ISA SB16, which I will be swapping out at earliest convenience.

Sadly no VLB slots on my motherboard so it remains to be seen whether I can use this for much gaming, but it's cool nevertheless!
I have ordered a SCSI2SD for it so that I can get files on and off it more easily, but it must come from the UK so who knows when that will arrive.

I would like to use it for retro gaming, in particular point and click adventures of the 90s such as Indy4 and Loom.