A couple (or, perhaps, quite a bit more) rigs for all ages

And it's running SLI to boot!

Perhaps, I'll finally get to installing W2K on it, to unleash the power of the second CPU. This is mostly meant for Unreal, Deus Ex and the like, and I was running (and totally loving) W2K at the time. Come to think of it, some of the best games are from that era. Diablo 2, Allods 1/2 (Rage of mages in the west)/3 (Evil Islands), NOLF... too much nostalgia, cannot continue.

EDIT: I'm debating with myself if I should just get a Tseng for the 386. But someone here mentioned that vertical banding is not exclusive to Trident, and ET4000AX specifically is known for it. Wonder if it is so, and if indeed, how bad/good it is compared to Trident's output.

Short update: PSU for the 486 has arrived, and was immediately installed.

Another short update: Am5x86 has arrived and was immediately installed. BIOS seems to have a problem identifying the chip, but is only too happy to run on it. I don't even have a floppy drive atm to benchmark it, and I am too lazy to remove one from any of my other machines, so that has to wait some more.

A teeny tiny update on Bard, regarding lighting this time. The two of the most "early nineties LED colours"... 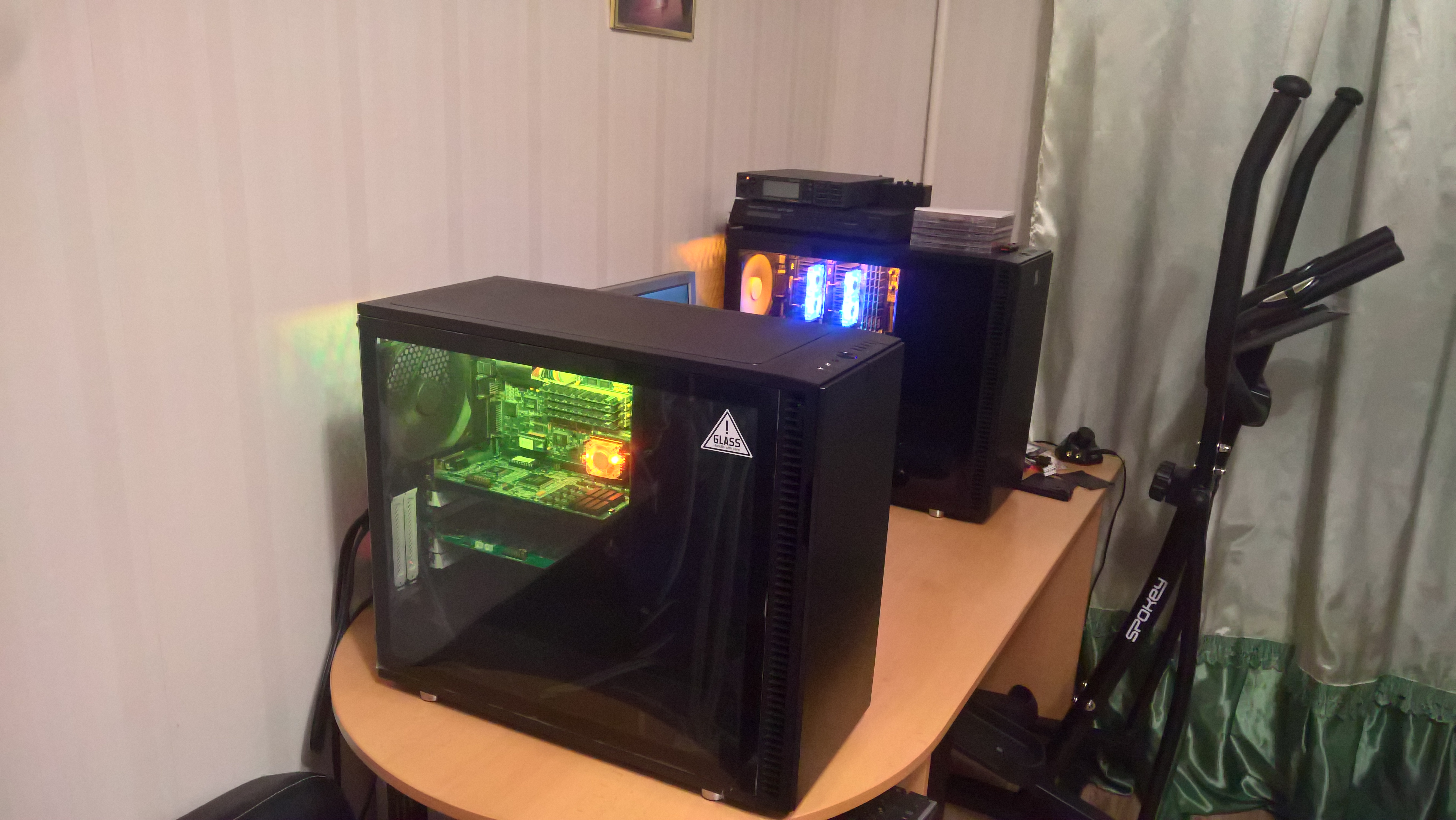 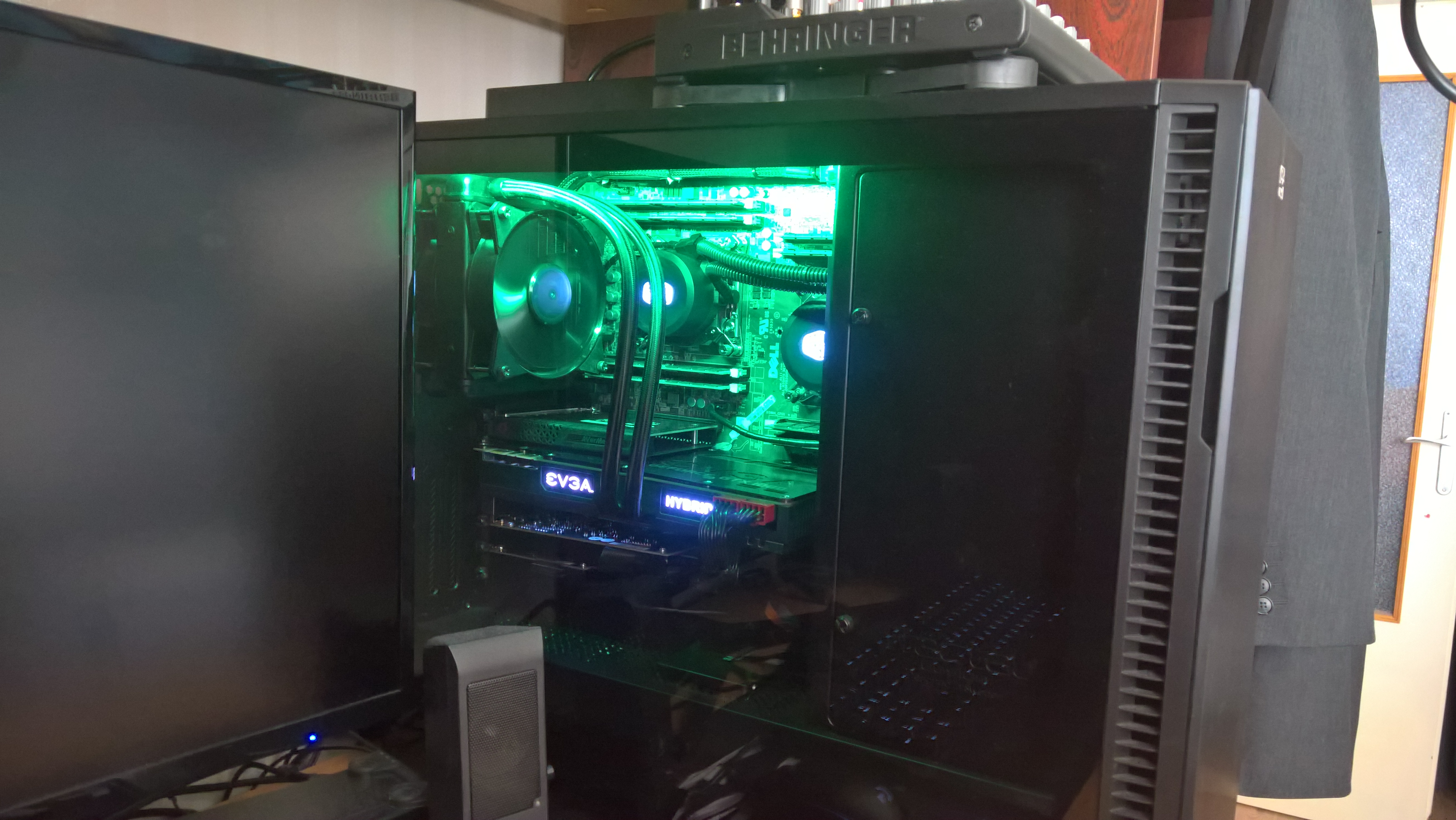 Oh, and I've finally connected a Cybex KVM (PS/2 and converter to Serial as needed), so that I no longer have to reconnect wires every time I'm working on a different machine.

Another minor update (with all this infection stuff packages are much slower to arrive).

I've sniped some curious Tseng 4000AX-based card for the 386 (sorry if someone else here was bidding on it). Would be interesting to see how it works in a 386, considering it was apparently designed for some video work, has multiple inputs and supports genlock.

Another purchase, this time more of an impulse buy, was a socket 462 board by Soltek, a very yellow board indeed. Now I am torn between making it a EDIT:Thunderbird platform and build another P4 system to cover mid-to-late 2000, or make this one Barton, and build a Tualatin instead for early XP stuff. Either way, I need a beefy PSU to run those chips. Of course, as they say in a completely different forum, the answer is to get both... but that is something I'd rather put off for a time.

You see, I've had so far a certain amount of logic to picking my builds (other than pokemon style collect them all):

- [still nameless], 386-25: early games that are speed-sensitive, pretty much anything DOS and some Windows 3.1 stuff

- Bard, Am5x86, VESA: to have a VESA system, to have a 486, and to have something that is fast enough for most dos era games, yet slow enough that I don't experience issues (e.g. Warcraft 1 on P2 is a bit fast at scrolling even on slowest setting, and water is quite literally blinking), etc... plus for some SB Pro and SB 16 compatibility. Among other things, the focus here is on DOS game sound. Also nostalgia, this (although Cyrix DX2-66 oc'd to 80) was my first machine, not counting all those I've had access to, but not really as part of my home.

- [this place was/is still up for debate, I'm not entirely sure I need a P1 system at all, as there is nothing it does that either 486 or a P2 won't do; P Pro might be cool, but, again, it brings nothing to the table that I already don't have. One thing that comes to mind is, if I ever get my hands on a GUS, I'd want it running and not collecting dust, so I'd want a machine for it, and Bard may happen to be unable to run as many sound cards; dream build would be to get GUS Extreme and be done with it, putting it into an MMX of some sort, I'm just not keen on 1k+ price for those red beasts...]

- Shaman, dual P2-450: fastest DOS machine I have, with SB-LINK it works natively for games like Descent, has 2 Voodoos in SLI for any 3dfx-loving games (hence Shaman), and S3 MeTaL for UT from Savage 4. Covers most early Windows games just fine.

- [this is where things begin to be interesting, what I need is a pair of systems: one would be something that is the absolutely fastest (or, at least, fast enough for anything I'd throw at it) non-speedstep system for games that are unhappy about changing CPU frequency on the fly, as well as some beefy AGP GPU with stable XP drivers in ddraw mode for games like Rage of Mages, yet T&L for games like KnightShift...

I also would very much like to have a system that is the fastest single core machine (what I don't mean is the fastest ever, what I do mean is the fastest, or around that, single core machine at the time single core was still the norm. Meaning, I'd prefer a Cedar Mill P4 or some Athlon. And I do have an AMD mobo that could cover the first requirement, with Barton it would be perhaps too close to P4, yet it does fit the description of "no speedstep and fast as hell AGP system"; going the Thunderbird route gets me something slower, but technically does not add anything a faster machine would be unable to do.

P4, on the other hand, among other things, will be running Vista (and also 64 bit). Not just because *cough* P4 *cough* Vista *cough* bad, but actually because I've had Vista on a P4 630 with 2 Gb ram, and it never really was sluggish or unreliable. Quite the opposite, it was like a breath of fresh air after the nightmare of XP (highly subjective, I know). I would also like to have some more or less period appropriate VGA, and am torn between getting an X1900XT (I've had x1300 and liked it, an actual low end accelerator that was accelerating things, especially after gf5200), or going the green camp route with gf7950, which is also a card I used to have at a slightly later time. And, given the next machine in this list, this one isn't strictly speaking necessary, as Windows 7 with a faster GPU and CPU will easily run anything Vista did.]

- Assasin, S771 Xeon on S775, dual GTX285: a SLI setup with probably the highest performing Tesla microarchitecture-based nVidia gpus, same as in legendary 8800. Dx 9 machine with Windows 7. To run anything my current pc won't run because of Windows 10 incompatibility.

- Sorceress, my current dual Xeon machine that still runs pretty much anything, and is only held back in terms of compatibility by Windows 10, which, for example, doesn't want to run Dragon Age Origins among other things. Needless to say, it won't run 16 bit apps either, but that is covered by Shaman.

Now there are a few problems:
- I don't strictly need P4 for anything
- I very much would wish to have a Tualatin build, but its purpose completely overlaps with either Thunderbird or Barton
- I would also like some Rambus build, which, given this list of machines, is even less practical to have.

Ok, let's be honest here, none of the machines above are strictly necessary, but they do, for the most part, play a specific role. However, the ones in the last list are completely pointless other than the fun building them... So I'm not really sure what to do next, and, more specifically, should I pick Barton or EDIT:Thunderbird for s462?

EDIT2: At this stage I'm leaning towards "collect them all" approach, making a Barton build out of Soltek board, and planning on a P4 and P3 Tualatin builds.