A couple (or, perhaps, quite a bit more) rigs for all ages

Truth be told, obtaining all the weird stuff is probably as much fun as putting it all together... and now there are still two rather exotic and expensive pieces in my sights: GUS Max and GF5950.

Ouch indeed, those likely won't come cheap. I recently saw a GUS PnP going for 280€ in my local classifieds and it got sold within 24 hours. I'm amazed that people can drop that kind of money on a sound card, but I suppose someone who used to have it as a kid and has fond memories of it might be willing to do that. Good luck with your search!

BTW, if you're still looking to name that Cyrix build, how about "Crusader"? You mentioned that it will be used for late DOS games, and Crusader No Remorse/Regret immediately come to mind.

Hm, I think I'll pilfer that name right from your post. And it does fit nicely with the rest of the "party". Kind of makes sense that Cyrix went on a crusade against Intel, and Gravis against Creative... too bad it ended as all the other crusades. 😀

A new addition to my "retro desk". Not quite a computer, but hey, it comes with a floppy. 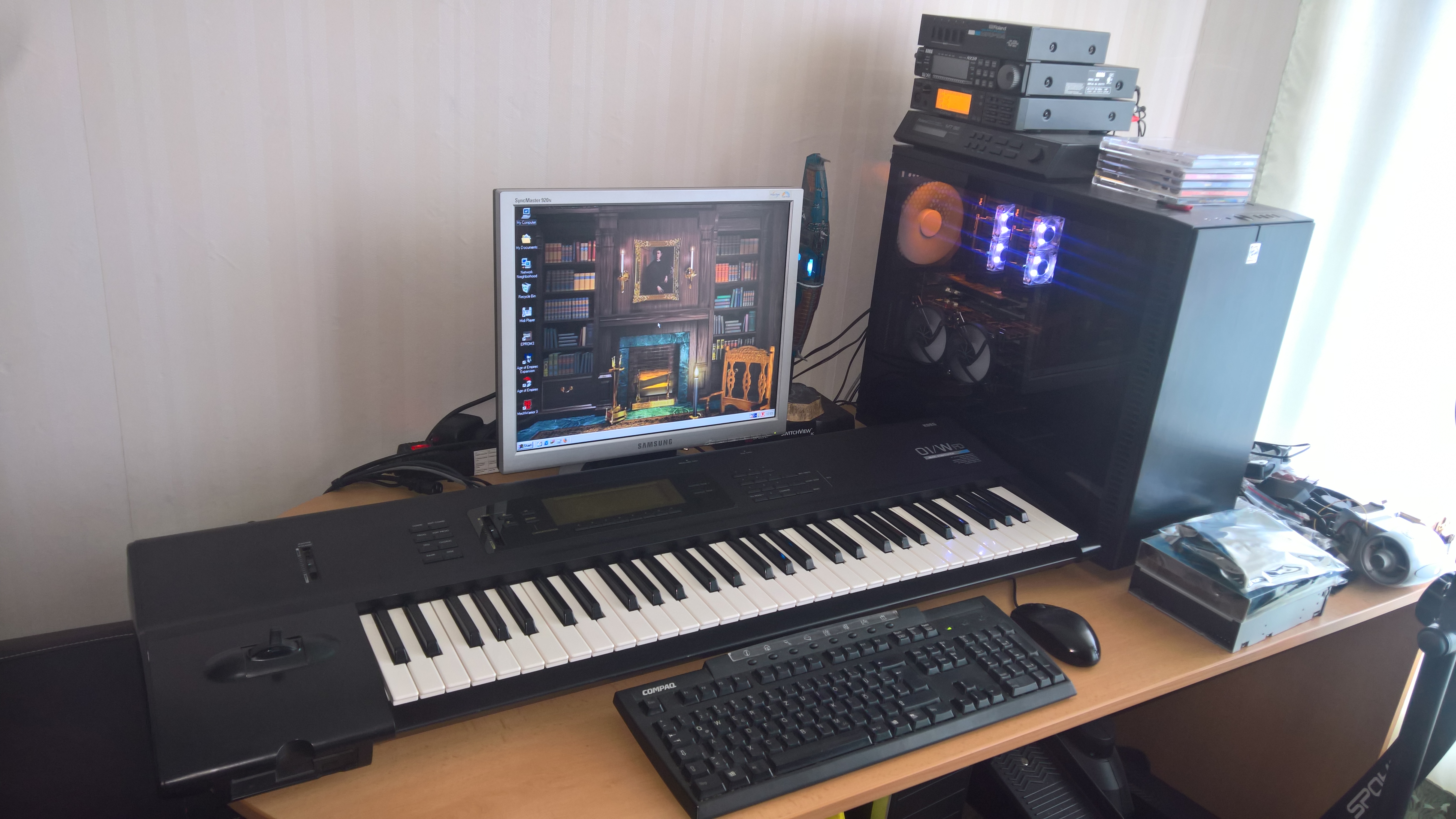 Now it does look pristine, and, for the most part, it is quite functional. Yet there are a few things to do to bring it to perfection, and it is bound to take some time. A few switches are finicky, plus the backlight is almost gone.

That said, it sounds phenomenal, which brings more of a rant than a question, really. If all the reviewers consider this unit "a classic, but nowadays cheesy and outdated", I can only wonder why, with modern devices supposedly sounding that much better, all the modern music sounds like poorly processed fertilizer? I mean, this device is freaking quarter of a century old, and it sounds richer than what I hear from most modern pop titles; pop clearly being one of the major users of synthesizers and romplers, they are sure to benefit from all those nice modern workstations, right?

UPDATE: The floppy drive in this unit is dead. It even smells dead. There is also a bit of broken plastic, but nothing that can't be solved with some epoxy and a longer set of screws. Since now replacing the floppy is no longer a "what if", but "absolute must", will see if I can get Gotek to work in its place.

As always, it takes some time of peace and quiet before another storm. Here's the first post of many to come. I've received another package, and there's an elephant in the room. Look at this Cooler Master Jet 7! 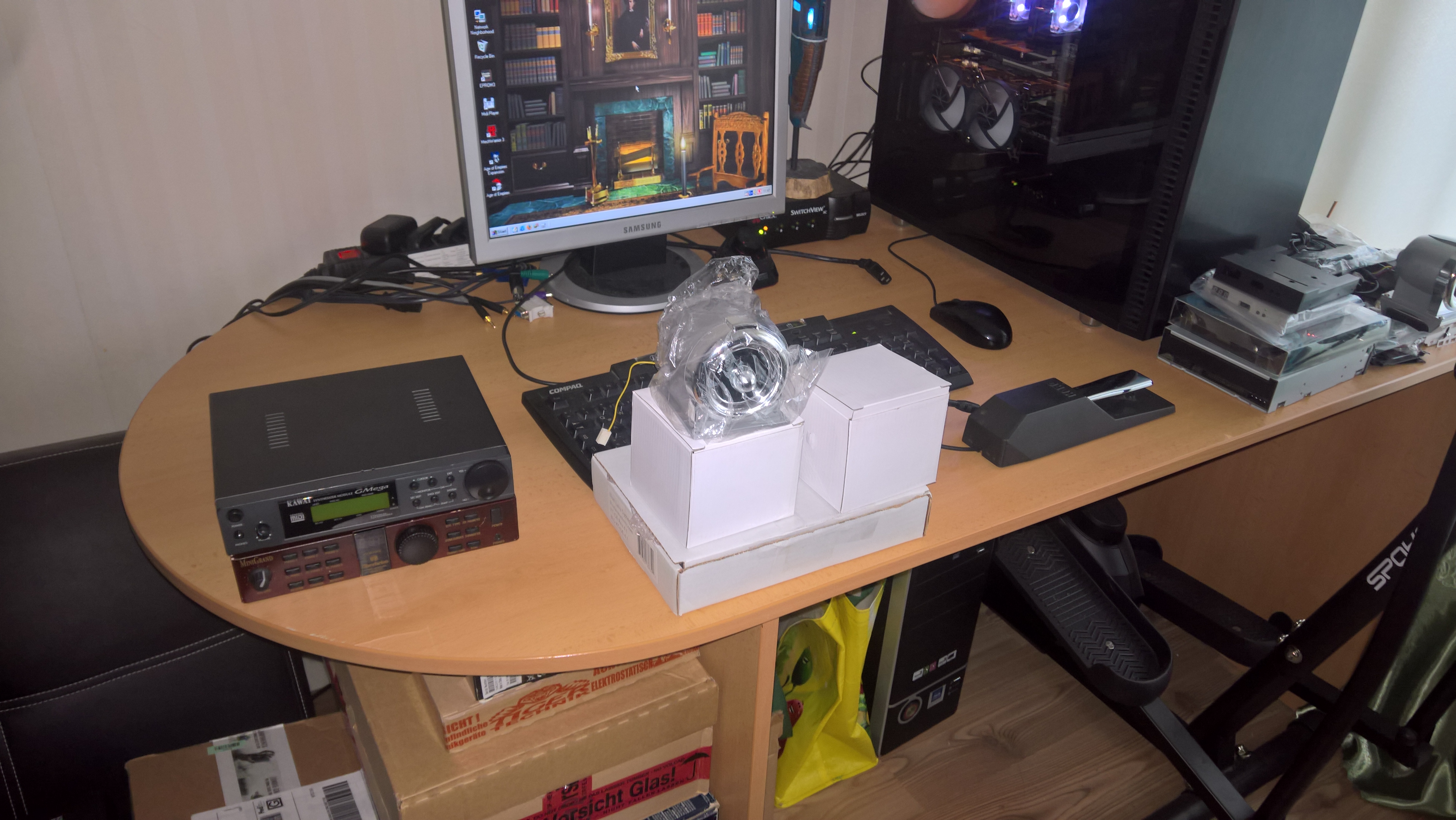 It turns out, you can still order it, and the nice folks at CWC will deliver. Granted, it's not the whole thingamajig, just the cooler, but it's pretty standard hole arrangement means you could mount it on any socket 7/370/462 heatsink. So, if anyone wants it, the link is here. I've also got a couple spare ones now, one new and one heavily used, but perfectly working, that I will probably donate to a local retro club.

Installing Windows on this little device... 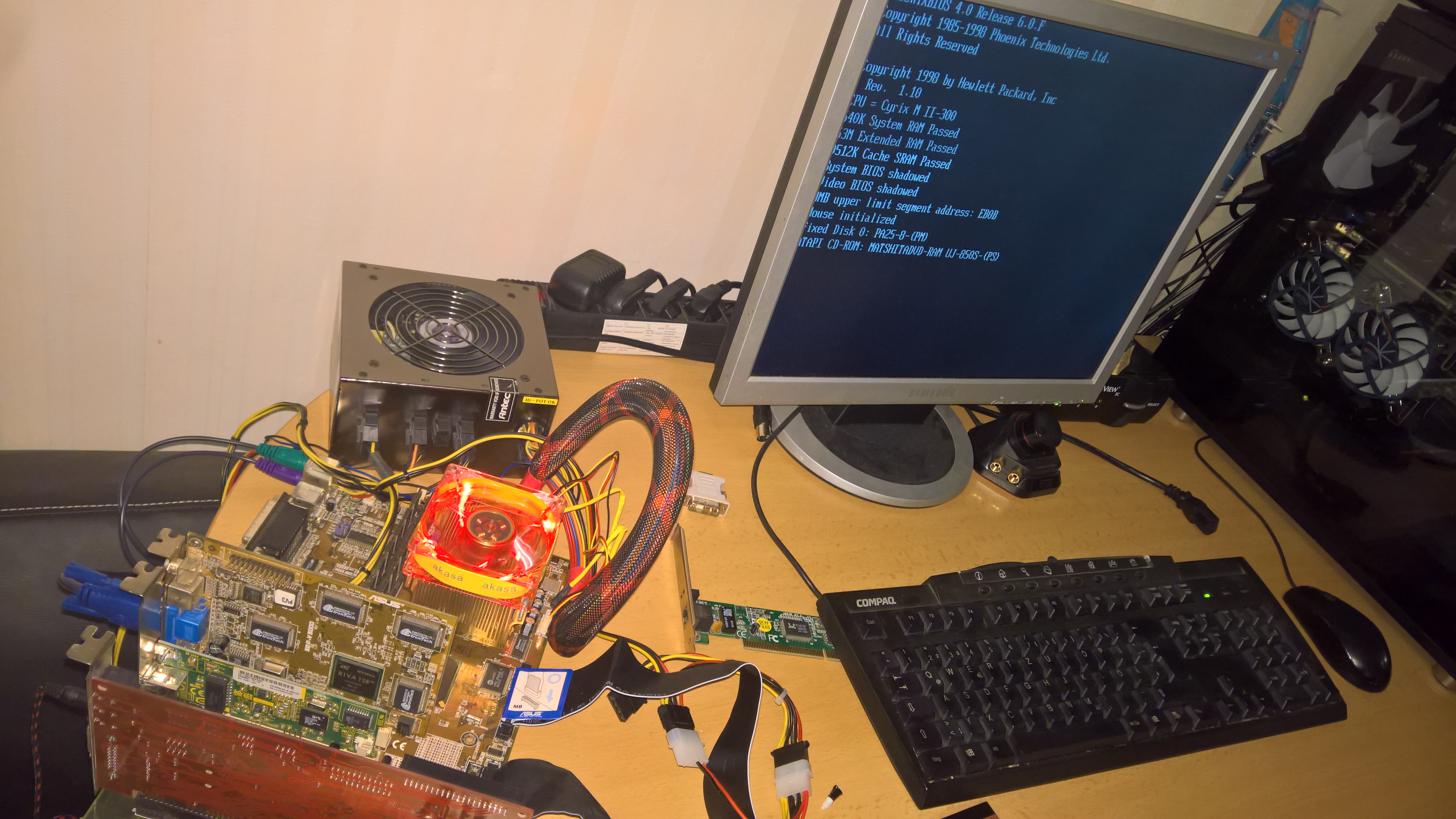 BIOS thinks it's an MII, even if the sticker proudly says 6x86 MX. Not that it matters, since it's the same rose by any name...

And yes, nothing works from the beginning. It took a BIOS update to get this to POST, and it took some liberal application of a hand saw to make the cooler fit. So, if anyone else is thinking of using this ASUS SPAX motherboard with GlacialTech coolers... ye be warned.

Good news: GUS works. Bad news, there's a conflict with onboard audio. And there seems to be no way to disable it. Looks like I'll need to find myself a non-oem SP97-XV instead. If only those weren't almost as expensive as the GUS itself...

This project is now on hold until I get a different mobo. But there are more projects to build.

Good news: GUS works. Bad news, there's a conflict with onboard audio. And there seems to be no way to disable it.

Congrats on the GUS!

It sucks that there's no option in the BIOS to disable on-board devices. For Windows installs, it's sometimes possible to free up the resources used by on-board hardware by disabling it through Device Manager, but I don't know of any way to do that in pure DOS.

It's a bit of a shame, as I wanted to test the jackrabbit out of that GUS, pun intended. Ah well... At least I know that Cyrix 6x86 (IBM one) works, disk works, Riva 128 works, network ... works. Pretty much everything is ok. Cooler was modified to fit here, so it will also fit the SP97-XV if I get lucky with one.

On the bright side of things, there's more to do with Seer, and I've got some new midi modules to keep me busy for a while. Then I still need to fix the 01W... for which I'm only waiting on new switches. Plenty to do. And a holiday is just in time for it, even if I'm probably (finally) spending it doing other things, like having some well deserved rest.

I'll probably check if I can finally get Seer to boot off a HDD, and, if so, that would be something to spend time on in the nearest future. In any case, test was successful, so it's already "Mission Accomplished". Not all Secondary Objectives met though, but I can live with that.

Not sure if this helps, but I just remembered reading somewhere that if you set the "PNP OS Installed" option to "Yes" in the BIOS, it will prevent automatic resource assignment for ISA PnP cards under DOS. No idea if that works for on-board devices though, and I don't think all BIOS types have that option either.

There was also some Intel ICU PnP Configuration Manager utility for dealing with PnP hardware in DOS, but I never used it myself.
EDIT - There is some discussion about that utility here: How do you install the GUS PnP drivers in a 486/DOS pc?

Not much in the way of settings with that BIOS. And it's Phoenix, too, meaning, hacking it would be problematic. Furthermore, based on some folks adapting SP97-XV BIOS to that board and keeping onboard audio (someone on VOGONS actually did replace BIOS entirely), there is not much point, as the fact audio continued working would imply it doesn't have nor need BIOS to support itself. Instead, I would think it is actually a full on PCI device, hardwired on the board but otherwise fairly standalone. In any case, nothing worth worrying much, as this is certainly not the most expensive board I've had to put aside. Plus, since I'll keep the CPU it came with, and the RAM, I could just as well donate it to someone who doesn't need a GUS running on it. Meaning, I could reassemble the thing with K6-2 and 64 Megs of ram and donate the whole package, which has onboard video and sound and all it needs is a PSU and a case.

P.S. If I had a GUS ACE, or even Classic/Max, having onboard SB-compatible sound would've been a blessing rather than a curse. But Extreme thinks otherwise...

EDIT: Seer booted off a HDD. Or, rather, an SSD that pretends to be one, with all the CHS addressing. Now, getting NC installed... speaking of which, unbelievable happened. I've actually managed to buy a boxed copy of Norton Commander! Now THAT is a rare find! (can't wait for it to arrive...) 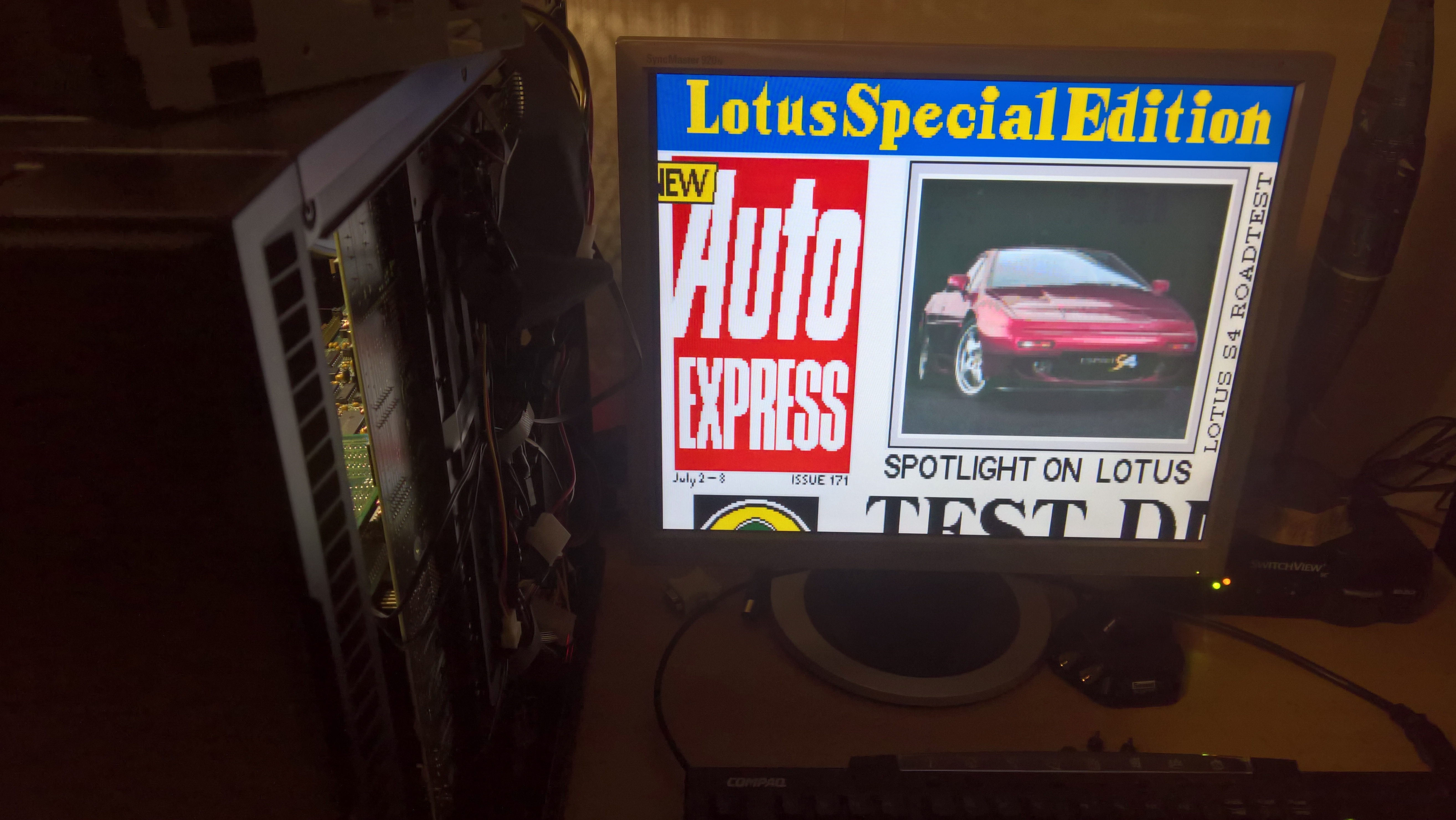 In the mean time I've switched the 16 Mb Savage 4 in Shaman for a 32 Mb one. Works like a charm, and UT is surprisingly playable at max settings on 800x600, averaging 44 FPS! Looks awesome, too! Now, Voodoo 2s, don't be sad, you've still got Unreal and Mechwarrior 3 to play!

I've also installed Windows 3.11 on Seer, and it works. Hangs on boot with native 509 driver, though. But I'll try another one later. Best part, mouse also works (using serial from that Cybex switch, so I'm actually using a PS/2 mouse through the serial). Latency is... tolerable. I suppose, original serial mice weren't perfect either, but I don't recall ever being upset with those. I miss that old three button Genius... and the Mitsumi...

EDIT: Speaking of 386, she happily booted Windows 98 off a disk I had used elsewhere before deciding to use it with Seer. Of course, now that SSD is reformatted for DOS 6.22 (though, through a lucky accident, I did format it with large disk support, and it actually works - yay, 2 Gb of disk space on a 386!). But I was really surprised to see Win98 booting in a relatively short amount of time, and with little to no issues! Must have something to do with Tseng ET4000-based VGA and 16 megs of RAM. Cache on that board is also supposed to be above average in speed, if marketing material is to be believed. Either way, it works surprisingly well, and it's nice to know it is capable of handling Windows 98 SE well enough to actually be usable!

I've actually managed to buy a boxed copy of Norton Commander! Now THAT is a rare find!

Wow! I don't think I've ever seen one of those before. Great score!

In the mean time I've switched the 16 Mb Savage 4 in Shaman for a 32 Mb one. Works like a charm, and UT is surprisingly playable at max settings on 800x600, averaging 44 FPS! Looks awesome, too!

The Savage4 and UT make a pretty good combo indeed. A buddy of mine had it back in the day and I still remember being jealous of how good S3 Metal rendering looked with detailed textures enabled. It's a really nice card for Unreal engine games of that age.

Posted on 13 minutes ago

I've actually managed to buy a boxed copy of Norton Commander! Now THAT is a rare find!

Wow! I don't think I've ever seen one of those before. Great score!

I was surprised myself, and it's my favourite version, 5.0! And... looks like it's in my country, so should be coming this week.

In the mean time I've switched the 16 Mb Savage 4 in Shaman for a 32 Mb one. Works like a charm, and UT is surprisingly playable at max settings on 800x600, averaging 44 FPS! Looks awesome, too!

The Savage4 and UT make a pretty good combo indeed. A buddy of mine had it back in the day and I still remember being jealous of how good S3 Metal rendering looked with detailed textures enabled. It's a really nice card for Unreal engine games of that age.

Always loved S3 for their quality, even without the texture pack.

I'm officially out of thermal paste. Like completely. Going to get some, then will try to install C2Q Extreme in Assasin.