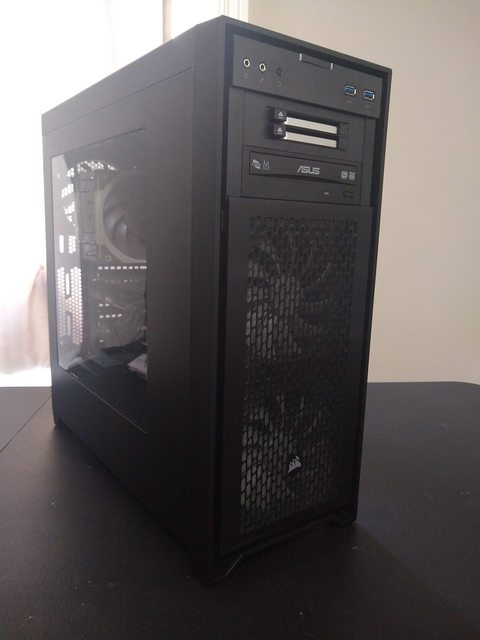 WARNING - THIS BUILD IS A BIT SILLY; I UNDERSTAND

Since starting my "retro" gaming hobby, I have always wanted to build stupidly over-powered machines for the OSes that I planned to use on them. If you take a look at my Pentium 4 build, you can kinda see that to some degree. It's not necessarily about being period-correct - it's about seeing what you can run a given OS on, and how insanely well you can run games on it from the era you're targeting with it.

This PC, however, does more for XP than my Pentium 4 machines does for 98SE. This, my friends, is my i7-3770K rig, chalk-full of some of the highest-end parts that are fully supported-under XP Pro. x64 Edition and Vista Ultimate without any issue. It's purpose - to run XP/Vista-era games that can't easily be ran under newer Windows OSes, or games I have doubts in doing so, at high-framerates and high-resoltuions. Oh, it also runs Windows 7 Ultimate and 8.1 Pro for fun, too.

I originally built this PC a few years ago. At the time, I was of a mindset of wanting a PC capable of both running Windows XP for "retro" gaming as well as Windows 10 for modern gaming and daily-driving. My first attempt at this was my first-gen Intel Nehalem PC, with a rather crappy budget mATX Asus mainboard, and it's final iteration sporting an i7 and the same exact 780 ti found in this build. However, performance under 10 was poor (in part thanks to me running games at 1440p), and stability questionable at best. So, the next logical step for me was to build a new system, one that was the last Intel platform that officially supported Windows XP, and maybe hopefully supported Windows Vista to some degree. Hence, I settled on Ivy Bridge as my platform of choice, and built for the most part what I'm showing to you today. I did eventually upgrade the RAM to the current kit of fast G.skill RAM, and my GPU to a 980 ti (which I had to downgrade back to the 780 ti for reasons I'll explain shortly), but last summer, I again felt the PC lacking in modern gaming, and so I upgraded again, this time to AMD's Ryzen 3000 series. But, unlike the previous upgrade, in which I disassembled and sold of most of the components that I could not use in the new build, this i7 machine remained relatively intact, running XP Pro. x86, waiting for me to do something more with it.

I finally got around to that "something more with it" recently, reinstalling and upgrading XP Pro. x86 to XP Pro. x64, installing Windows Vista Ultimate (most if not all Windows 7 drivers for this motherboard also work under Vista), 7 Ultimate, and 8.1 Pro., adding a 3.5"-to-2-2.5"-drives hot-swap bay for 7's and 8.1's SSDs, deliding my 3770K and replacing the crappy stock TIM with Thermal Grizzly Kryonaut paste to aid in pushing my original 4.5GHz-1.225V OC to 4.7GHz-1.3V, and downgrading my GPU back to my 780 ti that was originally in this machine for "best" XP compatibility.

The result: the most powerful XP machine that I have built to-date.

Check out my full Imgur album (i7-3770K Ultimate XP/Vista/7/8.1 Gaming Machine) showing off this build. If I do anything else to this build, I will update this album.

For a complete list of nearly every part in this build and the cost of each part, check out my "Financial Accounting for i7-3770K Ultimate XP/Vista/7/8.1 Gaming Machine" Google Spreadsheet.

I'm going to start off where I began turning this husk of my former main rig into the Windows conglomerate that it is now, not when I was originally building this PC.

Installing each version of Windows was relatively easy. I'd add the drive I wanted to install a given version of Windows onto to the system, disconnect all other drives, finish installing and updating said Windows (updating was the most tedious, boring part of each install; it was like watching paint dry), and then finally reconnecting the other drives and having each Windows OS recognize the other's drive. I chose to use hard drives for XP and Vista, since neither OS supports TRIM, as well as for longevity's sake - unlike with my PIII-S and P4 builds, I rather not have to worry about Windows not knowing what an SSD is, and wearing out the SSD faster than I'd like, and since I'm going to use this machine more than those other two builds, a hard drive seems like a better choice, but maybe I'll change my mind and reinstall XP and Vista onto SSDs for the fun of it. For now, though, I'm not too concerned, as XP and Vista run pretty smoothly on these modern hard drives.

One thing to note is that I also did a registry edit under each OS to make sure that upon boot-up, they will only be concerned with the health and layout of their own drive. I noticed that after my latest overclocking session on this machine, XP starting freaking out about the health of all of the other Windows partitions in the system, and started doing pre-login disk checks on the other disks that I couldn't stop and applied "fixes" to the other drives, which then prompted those installs to run their own disk checks on boot-up and fix themselves and others, and so-on. I believe that the older Windows versions don't know what newer versions of NTFS are, and freak-out. To solve this, I went to My Computer\HKEY_LOCAL_MACHINE\SYSTEM\CurrentControlSet\Control\Session Manager\BootExecute and changed the value of that key to:

This way, each Windows install will ignore the other Windows drives on boot-up, but still be able to access them once I login.

There were some other complications imposed by XP besides just it's inability to exist with newer NTFS partitions in peace. As I found out here, I had to limit the amount of RAM XP had access to to 4GB via msconfig (XP then rounded-down to 3.5GB) for EAX to work, as apparently Creative's drivers, even if they do support 64-bit OSes, cannot have more RAM than 32-bit OSes can address to entirely work. Either it is Creative's fault, or maybe this was purposefully done for compatibility's sake for 32-bit games. I don't know, you tell me.

Also, on another note, while the most powerful GPU that you can technically use with the latest Nvidia drivers for XP is a 980 ti with some tweaking to a driver .inf file, it turns out that those drivers also are incapable of properly detecting what monitor is hooked up to your GPU, which means you aren't able to access LCD-specific scaling features in the Nvidia Control Panel, and the last drivers that I can find that do properly detect your monitor (352.86) don't properly support the 980 Ti (this is with the .inf edits to the driver, BTW), with the NCP and MSI Afterburner showing the card as "Graphics Device": 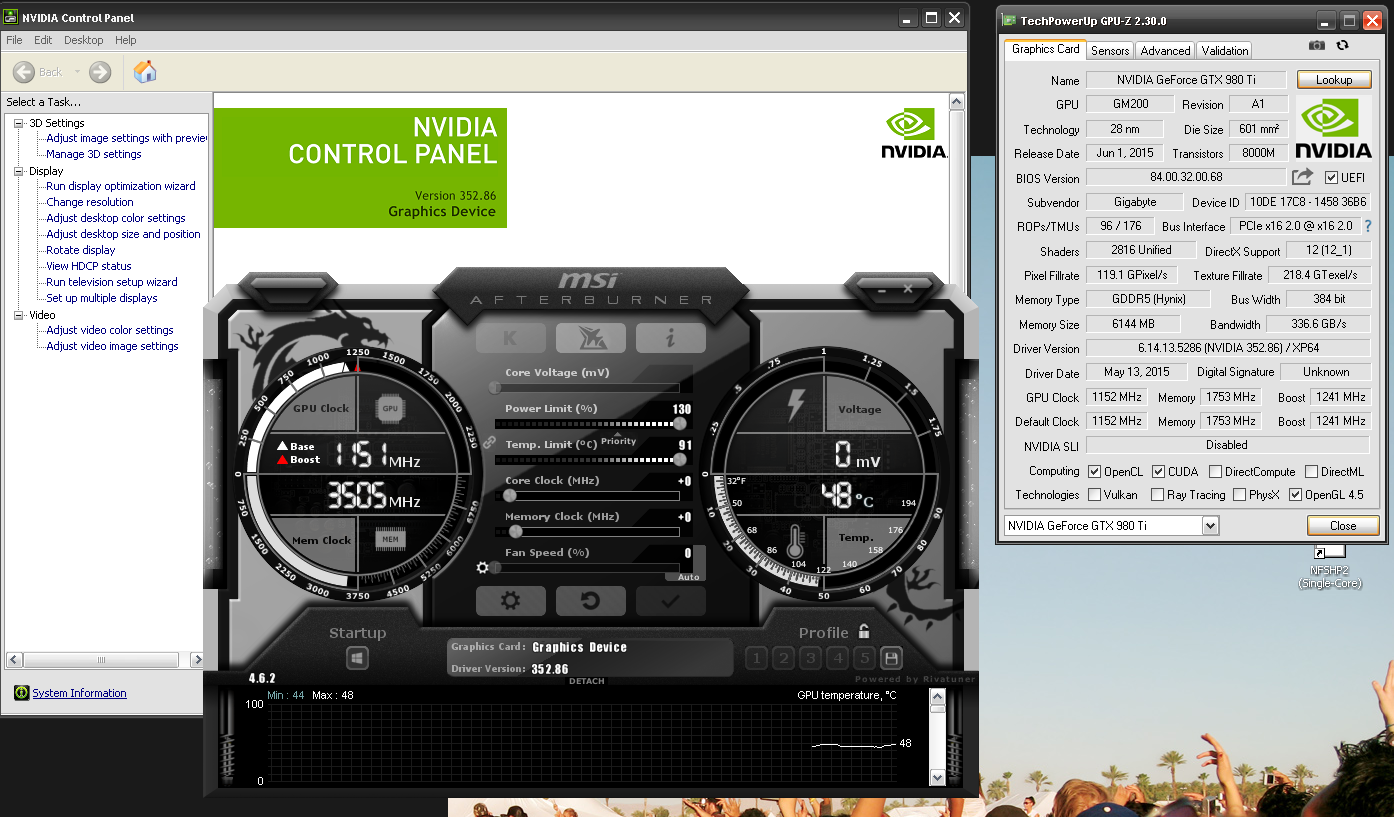 The card still functions properly from what I could tell in benchmarks like 3DMark and such, and this only appears to be a cosmetic issue, but IDK if there will come a situation where an XP game will query the name of the card, get "Graphics Device" back, and refuse to install or run because the return value didn't pass it's hardware checker (a game that does this and will not install, let alone run on newer hardware without a crack is Hot Wheels: World Race). So, just in case, I have decided to use my 780 ti as the GPU of choice for this machine, so I can have drivers that work properly that properly detect the card and the monitor hooked up to it.

Last thing of note: for XP and Vista, I have installed post-EOL security updates from 2017 and 2019 to better help keep these machines secure, because I do have this machine connected to my network, and I occasionally go online under each OS to check or read something.

Oh, and if you are curious, the peripherals for both my main and this rig are connected to my messy KVM solution: 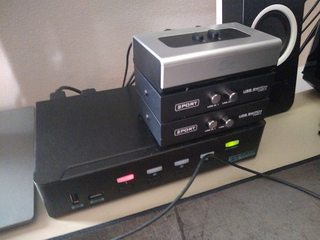 As to why I don't use that DisplayPort KVM's USB support, for me, it felt as though there was some sort of noticeable input lag, some delay, and so I decided to have my USB mouse and keyboard, and my audio too for good measure, dealt with separately.

Before I get into benchmarks, here are some screenshots, showing off the specs of the system: 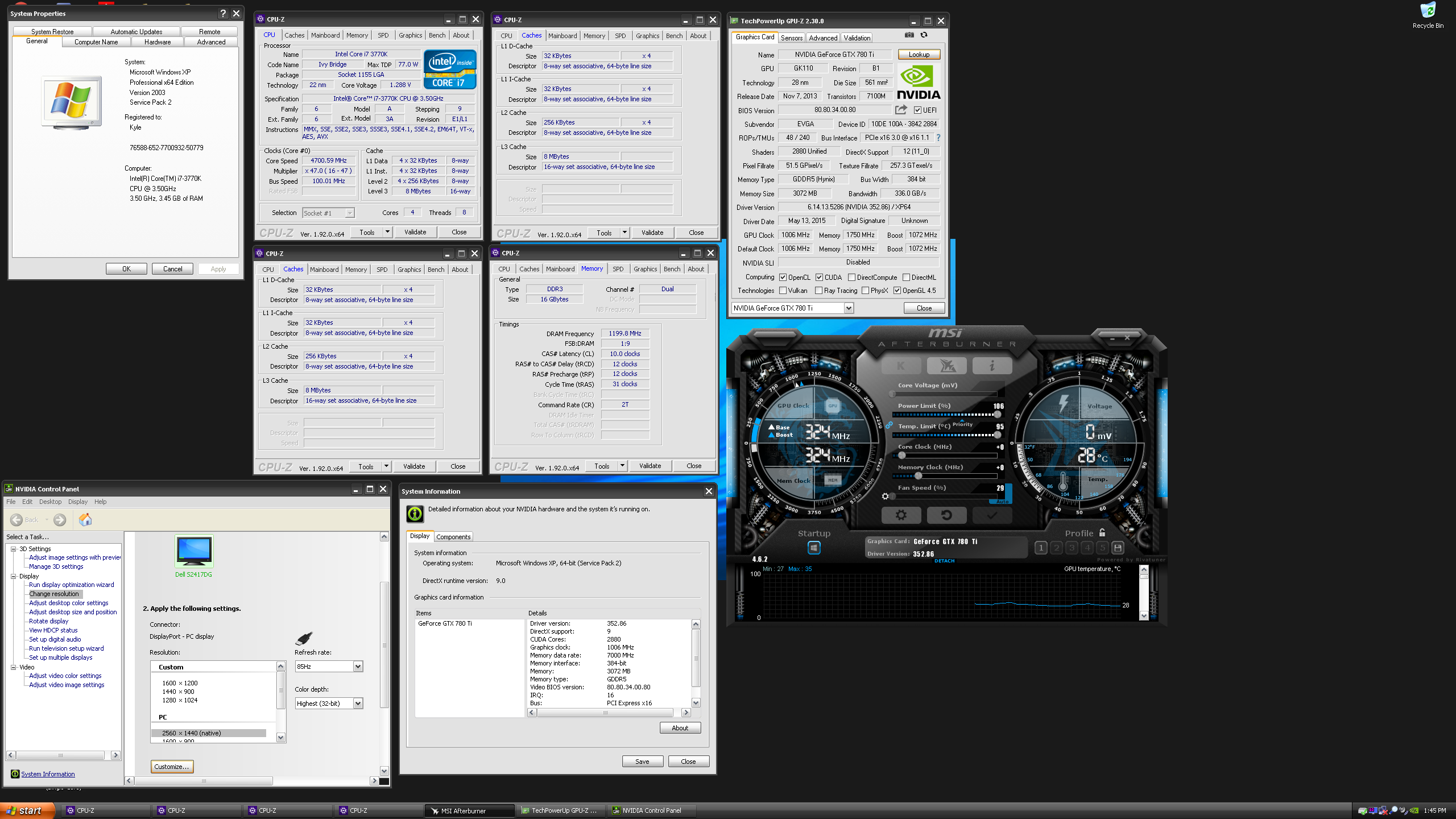 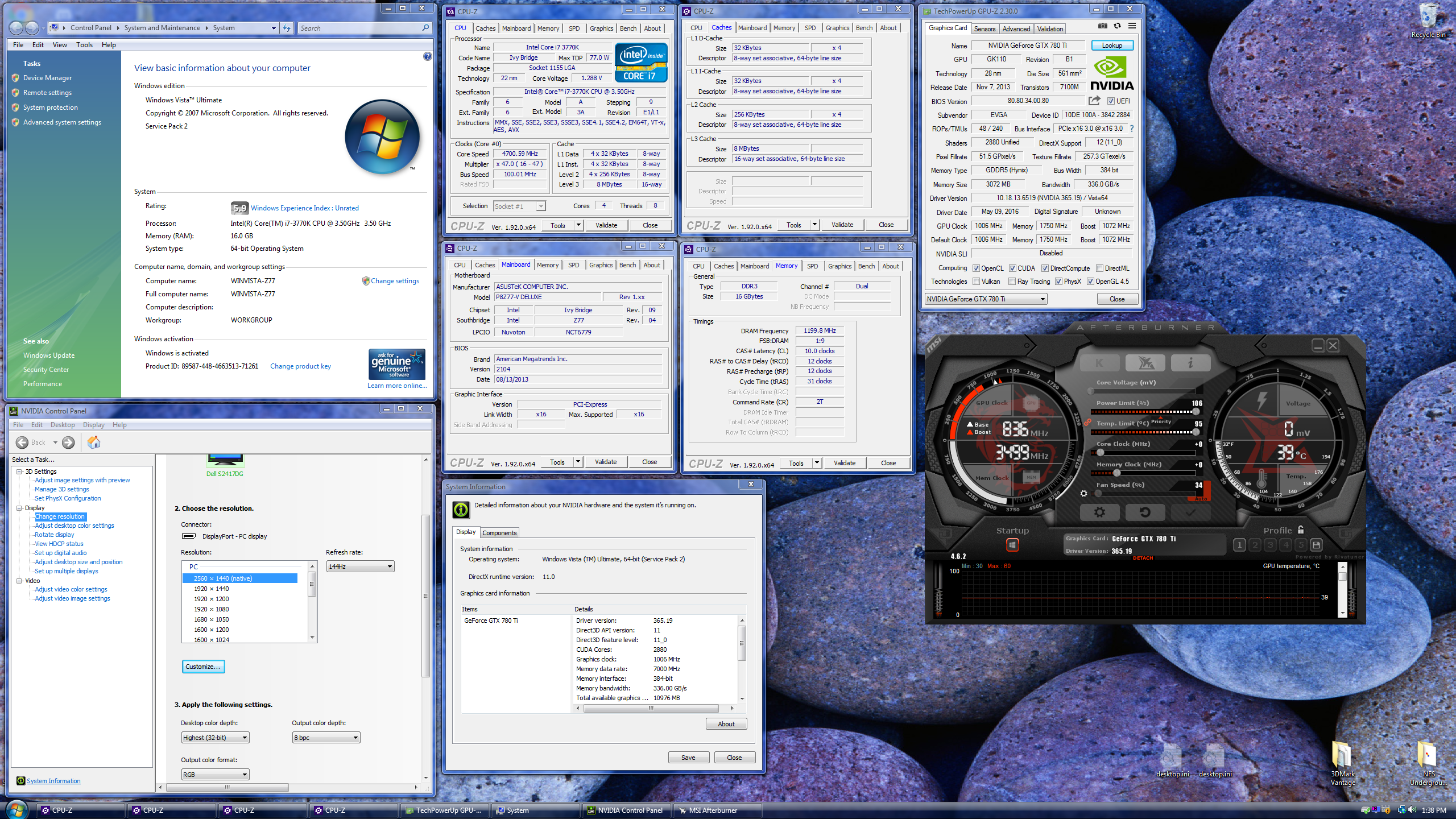 Just of note: IIRC, the reason why I didn't get a 3DMark score when I maxed-out the settings in Vantage was because it was a custom test. Hence, to show a difference between "default" settings and "maxed-out" settings, I have included GPU and CPU scores as well.

Next up, we have the famous Cinebench runs (ran under Windows 8.1):

The only thing of note with the disk benchmarks is how, even though both OSes are installed on identical hard drives and are connected to identically-rated SATA ports, the Vista drive is slower than the XP one. My guess is it has something to do with XP's earlier, probably simpler NTFS partition. Something I might look into.

For those with a keen eye, you might have noticed in those screenshots above that under XP, I have the Zune theme installed, although Microsoft never released the Zune theme for XP x64. Some guy wanted to solve this dilemma, and edited the installer a bit to get it to work under XP x64. If you are interested in learning about how he did it and where to get it for yourself, click here.

If you want to see the complete results of all of the graphics benchmark runs I ran (which are saved to the ".3dp/.3dr" files), you can find them in the public Google Drive folder of mine named "i7-3770K 3DMark Benchmark Results", in which you'll find the associated ".3dp" or ".3dr" files for each benchmark, as well as a file named "GBQRDT.txt", which lists the results for all of the graphics benchmark runs for the given config of the system as listed above.

If you want to go to where I store anything I have linked from my Google Drive here click here. That link will take you to the "root" directory I created to store all of my "public" files and folders for this post of mine.

Yeah, Sandy Bridge is soldered, as opposed to Ivy Bridge up to Coffee Lake, which are pasted.

780 Ti Superclocked - higher temp cards as "Ti" may to have lesser working time, besides creating higher temps is not good for other old hardware near.

Uh... well, I wouldn't classify this as "old hardware," also I think this card will last a long time. When I bought it, I thoroughly cleaned it and replaced both the thermal paste and pads with Arctic MX-4 and Arctic thermal pads. Won't die anytime soon.

Nvidia Pascal with turbine cooling may be better there, besides adding DX12 - as CPU fits to such games.

Yeah, but Pascal doesn't have XP/Vista support, now does it? 😁