A couple of new builds.

I've put together a couple of builds after burning out on Windows 98 builds and gaming.

This has been a long time in the making as the tomatoboard's built in serial controller doesn't seem to support normal serial mouse (nor the PS2 header) and it didn't work with my usual controller card. I shelved the project for a bit, but today my new controller card arrived and it's working great.

So this build is:
Tomatoboard 4DPS
AMD DX2 80 or AMD DX4 100
16MB RAM
STB Lighting 128 (Tseng 6000 I think)
Sound Blaster 2.0 with CMS chips
CF card
Gotek and a real floppy drive A and B
DVD drive (as it matches the case colour the best out of all my more appropriate drives)

Here it is with my, eh, mood lighting: 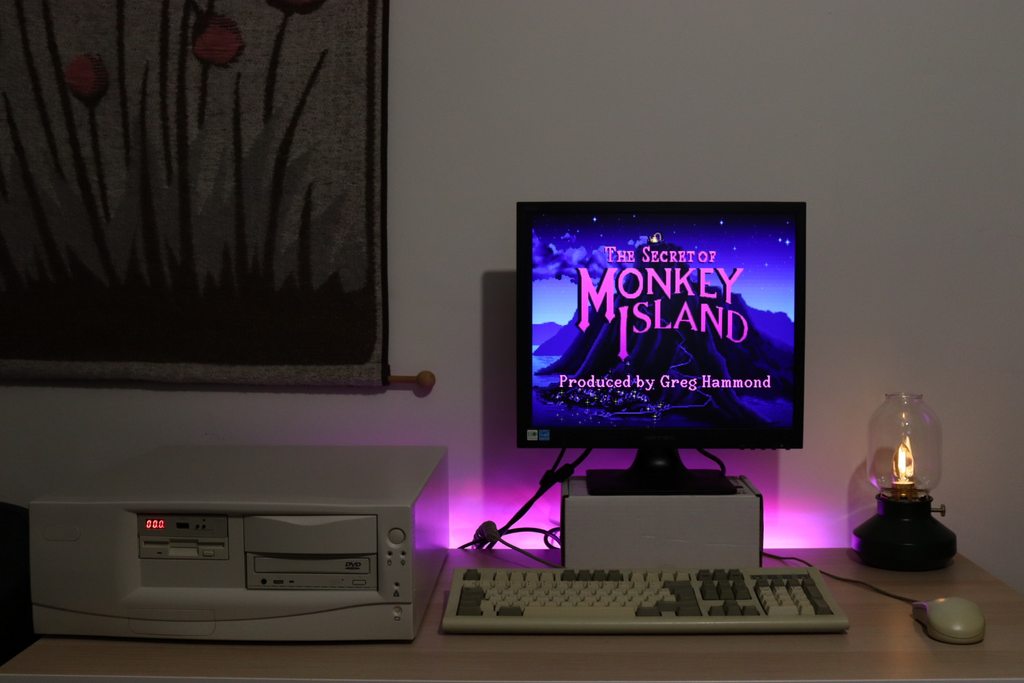 It's got a Socket A heatsink attached using thermal tape and the standard 12v CPU fan is connected up to a 5v connector so it is silent (but spins fine). I'm happy with this considering the size of the heatsink. 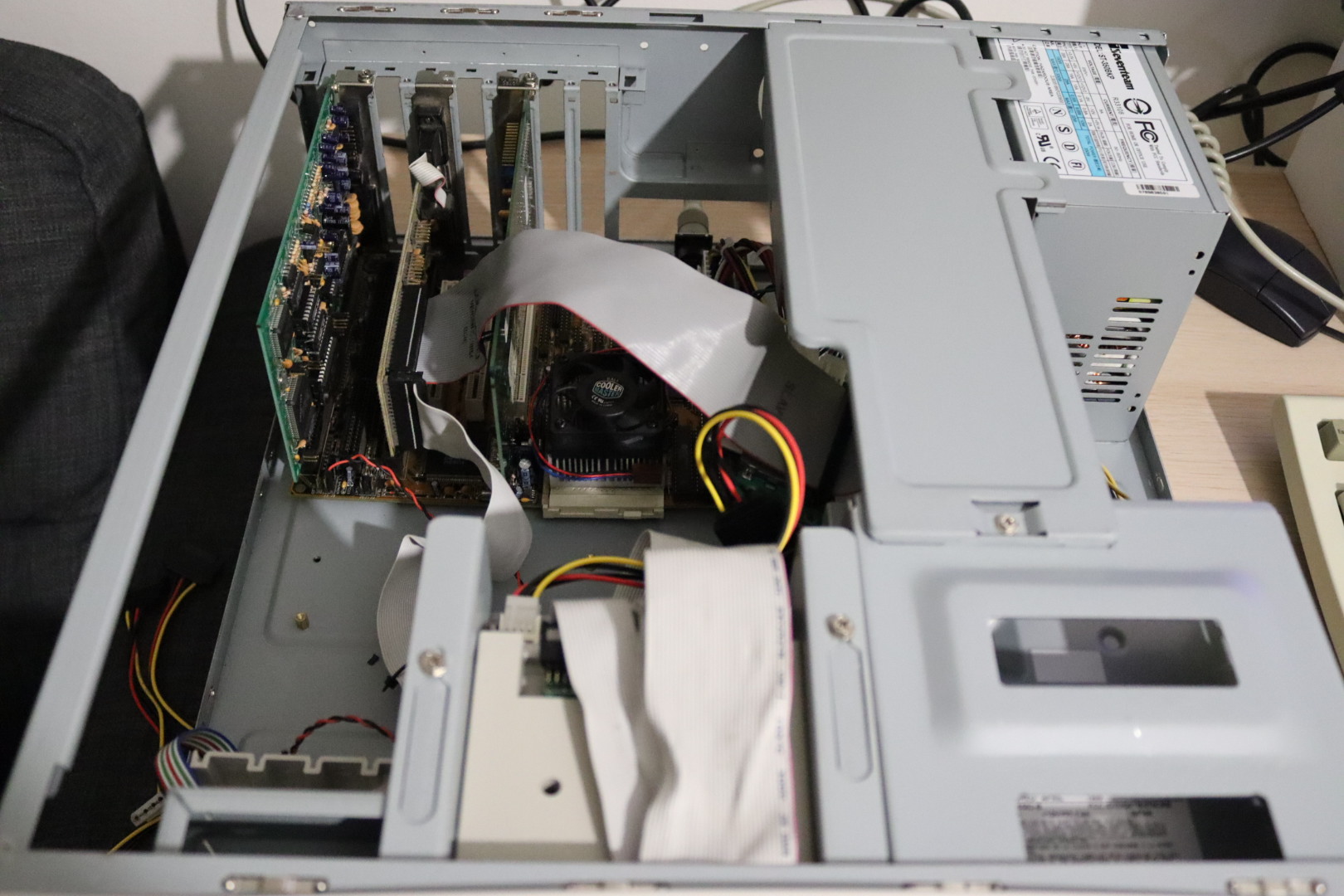 The CPU is a DX2 80 which I think is 40MHz x 2. The tomatoboard should support this but won't post at 40FSB speed. However, If I run it at a 25MHz FSB speed it reports 75MHz (as a DX2 80) and if I run it at 33MHz FSB It reports as a DX4 100 (and is completely stable). So it looks like it actually has a 3x multiplier! So I've left it at 100MHz for now. It could be the board won't post at 40MHz because this is actually massively overclocking the CPU as it would be trying to post at 120MHz!

I love CMS music so this card is a great CMS / OPL2 / SB combo. I've got more modern and complex cards that I use with my Slot 1 PC for AWE effects etc.

So the other PC. This is quite an unusual Windows XP PC, with a major flaw.

It's an FM2+ 7860K APU. It has a 3.6GHz base clock and 4GHz turbo and most importantly half decent graphics integrated into the CPU and I don't use a dedicated video card in this build. The rest of the specs is 8GB of 2133MHz RAM and a 850GB SSD and some kind of adequate build in realtek audio. It's on a Gigabyte F2A55M-DS2 cheapo board. The CPU has an interesting feature in that I can limit its TDP to 45watts in the BIOS if I wanted to. 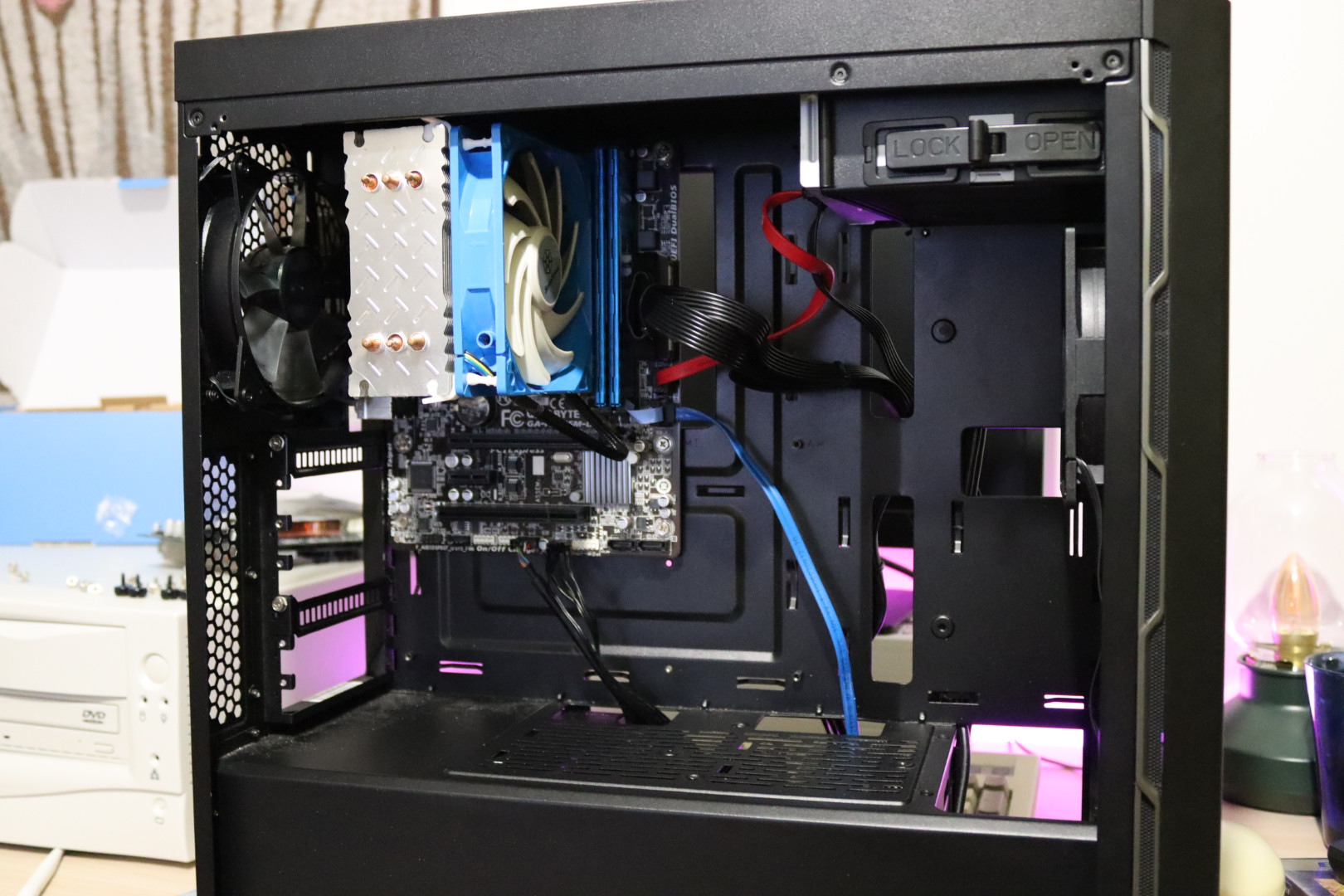 So far it's played all the XP era games I throw at it, like Doom 3, Oblivion with no issues at all. At max settings, games like Skyrim happily sit at 60fps and Bioshock Infinite get around 40fps, at 1280 *1024. It's actually a pretty neat, quiet and low (total system) power option for running these sorts of games. I have audio from the 486 passing through this PC so I can capture sound from here so it's being useful as well as fun.

The major flaw is that the CPU doesn't actually run XP, so it's actually running Windows 7, which I was not anticipating!!! Details smeetails though, right?

It's also weirdly expensive; the motherboards are £30 or so and the CPUs, if you want a 'good' one, are £40+. It's also not fast, and was destroyed by the haswell i3's that released at the same time. A haswell i3, cheap graphics card and cheap motherboard was a better option than a 7860k and cheap motherboard. But I've always liked slightly unusual builds so it keeps me happy at least, as no one really messes with FM2 that much.

(yes it's also even less retro than those Ivybridge Windows XP builds that get posted but meh, it didn't warrant it's own thread in Milliways).

Purple lighting to match the the purple text is pretty cool but does it change with the game? 😉

Not much to say about the 486, nice list of parts in a good looking case. The jumper and mouse issues are all part of the fun with earlier PC's right?

Can see the point of the "XP" build in a smaller case. Lack of running EAX would stop this being my primary XP build though.
Still I understand the logic of building a system just because.