A while ago I picked up two of these 90's thin clients: 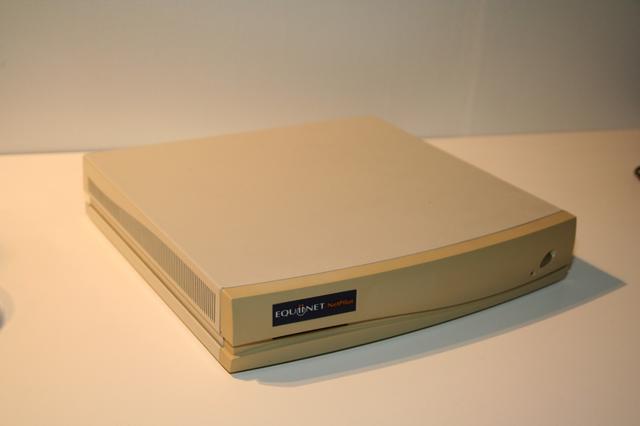 This is a Equiinet Netpilot, which was used as a Linux based network firewall back in the late 90's. To this day, NetPilot is still a company and this was their first machine. However, they did not design the machine itself. It's a repurposed Viewpoint TC-100 from Boundless Technologies and was originally used as a text terminal. 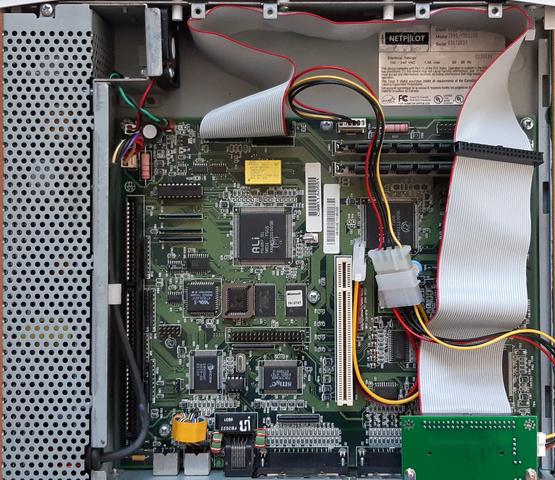 Inside is a AM5x86 running at 133 Mhz, no L2 cache, ALI 1487 chipset, 2 ram slots, onboard VGA by Cirrus Logic, onboard network card. It has a header for IDE and FDD, although no possible spot for a floppy disk drive. There is a slot for a HDD in a bracket you can install. Mine came installed with a ISA riser card which will give you 1 expansion slot, but a PCI riser card is also a possibility.

All in all a pretty unsual and fun form factor to turn into a 90's MSDOS gaming pc! Or so I thought. The PC gave me all kinds of trouble and whatever disk images I tried, jumper settings I changed, it simply would not boot from the HDD or CF card I hooked it on to. I gave the other PC to my younger brother to test, but he was also greeted by a pitch black screen. After a long long time we somehow figured out that the system was actually booting but something was preventing the screen from showing any information. It seemed that the PC had a 4mb flash drive installed on the motherboard and loaded a program called SILENT.COM right on POST to black out the screen. This was probably a safety measure. Luckely the drive also contained the UNSILENT.COM program that gives you back the screen and there it was: a proper dos prompt! I've installed a CF card on a bracket in the PCI slot and a SB 16 CT2770 in the ISA slot and it was ready run some cool dos games! Performance is pretty alright with most early to mid 90's games, although the lack of L2 cache is a bit of a bummer.

However, it's still a bit of a boring yellowed box. I could restore it with some retrobrite but I knew I wanted to try something creative for this case and so I went with an AMD theme to highlight the CPU that makes it tick. I've handpainted the case and the AMD logo with a brush. The plastic front bezel was done with a spray can and I've designed and printed my own case badge for it.

It turned into a pretty unique little machine and I'm pretty happy with the way it turned out. Painting the case was quite time consuming and tricky. Would probably have been easier to spray paint it and then put a sticker on top but you got to stick to your choices, right? 😉

I'm still looking for a more advanced BIOS for this system. Apparently, there is a very similar motherboard made by (American) DigiCom that also features the Cirrus Logic VGA Bios but I was not able to find any info on such a machine.

I like seeing odd setups. You did a nice job there.

I've got a slim line HP system, 32156, and have never found any information about it. It's running an Intel p200MMX.

Great job on that paint job. Does the motherboard have sockets to add L2 cache?

That's terrific work. The paint job is both clean and tasteful. Where did you find this thin client, and are there more of them?

Thats pretty brave blanking out the screen. would of made troubleshooting a nightmare!
So it came with the 5x86? thats pretty impressive, also imagine how many have been thrown away by people that didn't realise it's just a PC inside 🙁

Shame about the cache but even still that makes a great dos machine and added bonus of been so compact.
I admit not a fan of the logo on the top (It's well done just personal taste) but I really like your case badge design

Thanks for all the compliments on the case design 😀 I've ran a few DOS benchmarks for those interested.

Great job on that paint job. Does the motherboard have sockets to add L2 cache?

No, and no obvious spots where I could solder on some. It seems they really wanted to cut down on costs with this motherboard, which makes sense seeing what it was originally used for.

That's terrific work. The paint job is both clean and tasteful. Where did you find this thin client, and are there more of them?

Found them on the Dutch equivalent of Ebay. The guy who sold them to me used them as firewalls (running IPCOP), but I'm not sure where he got them from. Boundless Tech had a range of these machines back in the 90's, so there might be more like them out there. Next to the TC100, there were TC125, TC200, TC300, TC320, TC325.

I've zipped up the contents of the 4mb flash HDD and attached them here. There are a bunch of networking programs in there that might be of interest to some people.