Lag when using FRAPS with Dosbox

I've been attempting to capture high resolution video from Dosbox for a series of videos that I am producing. As far as I can tell I can't use the built in video capture function of Dosbox to get anything other than the natural resolution of the games, so I've decided to try using FRAPS.

The problem with FRAPS and dosbox is that when I move the cursor in the games from which I'm trying to capture video (In this case, the classic Leisure Suit Larry games) I get this odd sound stutter that ruins the footage. Is there anything that can be done in the settings? I'd appreciate any assistance.

Here's a video link just to show the issue.

Use DOSBox to capture, then scale the video using your Video Editing software.

And please, aspect ratio correct it to 4:3. 99% of YT videos have the wrong aspect ratio.

You see, I tried that. Premiere had trouble with the low res footage I was using, and created flicker so bad that it was unwatchable.

Hmm you can import the DOSBox footage into avidemux or virtualdub and render into divx or xvid. You can do the resize and aspect ratio during this step and also adjust the fps.

I found a solution!! You must set FRAPS to record at 75fps!! For some reason this fixes this! I just spent the last 3 hours figuring this out. :p

Here is a video of what I can do with Fraps at 75fps... I could barely move the mouse pointer around without the game practically screeching to a halt before.

At least in window mode, Bandicam works fine for me 😀

Reply 8 of 17, by Licentious Howler

Hi there, Howler's the name!

Now that it's possible, I'd like to speak my thanks to Qbix for creating DOSBox and VDMSound--both programs that have served me very well over the years--at no cost even!

I apologize if asking for help on post number one is looked down upon here (and a slight bump to boot!), but I'm hard-pressed to find a solution to a problem that is very similar to the one in this thread, and have had no success trying to resolve it up to this point. If it's something isolated enough to warrant it's own thread, then let it be.

Anyway, I can record DOSBox video using the built-in recorder without issue, but I want something a bit more optimal for high resolutions.

I'm grabbing footage for System Shock, which supports high(er) resolutions, and I want to make use of them if possible. But even tested on an Intel I7, running with an SSD (so data writing speed shouldn't be the issue) the best I can capture is 320x400 30FPS.

Essentially, there's 3 ways I could go about it, but I need some input for 2 of them:

1.) If I can somehow capture compressed footage with Dosbox's built in recorder... I don't think this is possible, but people here would know better than I.

2.) If there is a way to capture the Windows XP command prompt, then I could get the performance I really want, but as far as I've tried, it seems impossible. If anybody knows about some old-ass program or way to trick the command prompt into displaying D3D, OpenGL, or windowed mode, that's probably all I need, but that's hinging on anybody actually dealing with the command prompt anymore. 😜

3.) I could just forget about it, record the native resolution (for that old-school feel, that's what I'll tell 'em!), and wish you all a nice day. 😀

This game really needs a source port, namely because it just flat-out deserves it, but also because if it had one, I'd have no issue at all!

Anyway, thanks for reading, sorry if the info I'm looking for is already somewhere here in the site... and have good times everybody.

Edit: and you can bet I'll force whatever I need to into 4:3!

I don't have the game, so I can't test it. Waiting for GOG.com to release it so I can do a Tweakguide video on it 😀

Good to know the DOSBox recorder isn't just limited to the native resolution; I have my suspicions that DOSBox just has to work a lot harder on System Shock--maybe to emulate its 3D?

By the way, I like your voice, if you don't mind me saying--it seems kinda' radio-esque, heh.

I should have explained this a bit better.

The first part in the video is DOSBox. I use bandicam to capture DOSBox in window mode and show some tweaks to the config file.

The full-screen game footage is from a real MS-DOS Gaming PC. A Pentium MMX 233 😀

*My own personal facepalm*

It should've occurred to me you were using a legitimate legacy PC by your sig, several videos on your channel, and other topics here... it's just so foreign to me I kind of forgot...!

I commend the dedication behind your build, and also for jogging my mind; I hadn't considered external capture yet (largely because I'll have to save up for it,) but I have an old Pentium III that I could have do the game work, and the modern PC can take the video... it might be worth it if I shop smart...

Im able to film DOSBOX with fraps when I set the frameskip to 2 in the DOSBOX config. This allow my game to be filmed at full screen. Because the frameskip doesn't work well in some other game, I now use Hypercam.

I've been testing extensively and learning a lot about FRAPS and Dosbox interactions.. Here is what I have found out needs to be done.

Play the game in a window using DDraw. You can double the resolution if the window is too small. Set FRAPS to record at 70fps. It seems most DOS games run at 35Hz and DOSbox can double that if you move the mouse pointer around very fast.

FRAPS will only recognize DDraw in a window, and not fullscreen.. The only way (to record with FRAPS fullscreen) is using OpenGL, and OpenGL is the CAUSE of all the slowdown that happens when FRAPS isn't even recording.. With DDraw, it only happens when recording lower than 70fps. I'm not sure if different games might require a different FPS setting... This is how the lines read for Might and Magic World of Xeen for me under [sdl]:

Here is a test video of Might and Magic III using those parameters (except it's slightly different aspect ratio, 1280x800).

Just to clarify, the only way FRAPS will recognize DOSBox is with OpenGL (window and fullscreen) and DirectDraw (window only).

You can try yhkwong's build with d3d and see if that works.

This is not FRAPS, but I recommend a capturer for DOSBOX.

Daum pot player (freeware)
http://get.daum.net/PotPlayer/Beta/PotPlayerSetup.exe
(This "Daum" doesn't mean you should use "Daum Version" of DOSBOX.)

This program was originally for movie player. But after this program support online video broadcasting,
have another function. "Offline Video capturer"

1. After install and run this, press F5 for configuration. You can select capture area and resolution.
(Must do once, but option only need "capture area" for now) 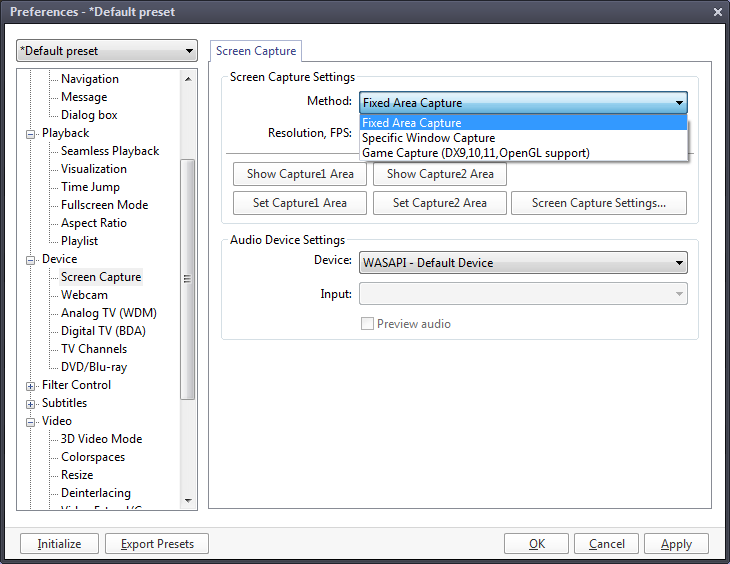 3. Final, Alt+C for call saving option. Change options as you love to. Press start to begin. 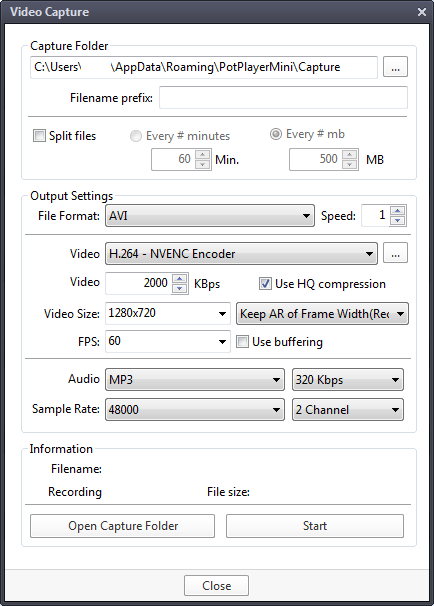