Bref has a weird mouse glitch when using Sound Blaster

Recently I discovered a nice Columns like game called Bref, which was initially sold as shareware but the latest version 2.0 was a freeware release.

Eventually I noticed an odd glitch with the mouse cursor in menus, which gets partially or completely obscured when moving it over certain parts of the screen: 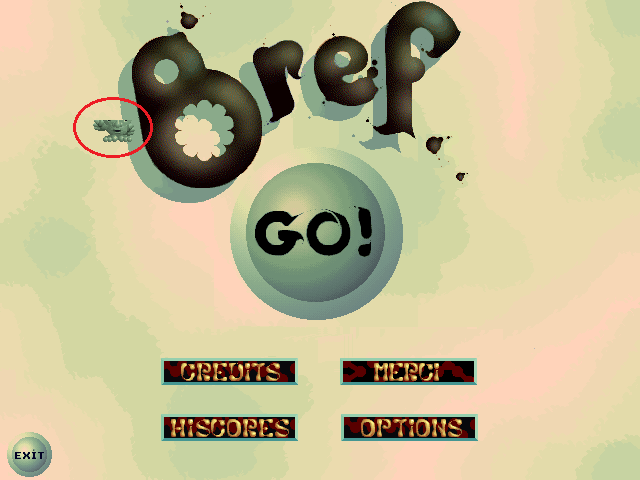 Trying out VESA related settings (UNIVBE, NOLFB etc.) had no effect on this issue.

Separately, I noticed that the music would sound odd and/or out of tone, but while initially I wrote this off as an idiosyncrasy, eventually I decided to switch to Gravis UltraSound and see if there'd be any improvement. And surprisingly, using GUS not only improved sound/music quality, but also somehow fixed that mouse cursor glitch mentioned earlier.

I wonder what that could be caused by? Faulty SB support in the programme itself? Something in DOSBox SB emulation it does not expect? Is it in any way related to the fact that this is a real mode programme? (BTW, I ran it both with loadfix and without it during tests; it only complained about insufficient memory for SB music if I used the default size of 64 KiB)

Are there any other similar examples?

Things like pointer drawing glitches are often related to cycles, so try more or less. A DOS game made in 1997 will likely work best with a lot of cycles, so maybe max cycles with or without a limit.

the location looks to be around the boundary of one of the drawing batches.
so maybe try vgaonly as well.

It can still be the drawing/syncing to the drawing routine. It does look close to a part drawing

Thanks for the feedback folks!

I have experimented with cycles, they don't seem to affect anything. The odd thing is that the glitch is gone when Gravis Ultrasound is used, as I mentioned above.

Or rather, the glitch goes away when Sound Blaster is not used (i.e. the -S command line options turns off Sound Blaster detection), as I just tested the game with no sound.

So I'm guessing that Sound Blaster is somehow causing the glitch. I thought it would be easy to pinpoint from there -- I'm really just curious why this happens -- but if not the issue is not super important, as the game works fine with GUS, even when nothing is installed in the ULTRADIR variable.

The glitch you describe is not happening for me. I am using the output=opengl setting; which output are you using?

I test with surface, but I just switched to OpenGL both in 0.74-3 and SVN r4393 I got from the ECE site, and it did not affect the glitch in any way.

I tried this both via config command and by editing the actual conf file. No difference.

I'm on Win8.1 64-bit. DOSBox Sound Blaster settings are all on defaults.