It can run 1000's of programs, except for copy protected software.

That's a seriously interesting bit of gear, would be great to see some videos of it in action displaying some of what its capable of.

Very interesting, I never knew such a thing existed.

I got it a few months ago in a scrap lot, but didn't have time to test it yet:

Hirsch and I were both clueless what this card might be, until it arrived and I could read what's written on it. Paid around 30€ for the lot. I did bid on it because it contained two Tseng cards (ET4000 and ET3000). Then I realised that the Janus card is even more valuable. 😁

Really hoping you might do a bit of a write up or video of these two cards in action or this janus card if its the only one you have when you get around to finally testing it.

I didn't know the 16-bit ISA version existed. That is awesome. Plus it uses its own RAM? That's pretty cool.

Really hoping you might do a bit of a write up or video of these two cards in action or this janus card if its the only one you have when you get around to finally testing it.

Might take a while.
It has a wire soldered on the back. I have no idea if this was done by the manufacturer or the original owner. Also it uses a 40MHz quartz (which is dented) instead of 20MHz. I might have to replace that.
Definitely gonna have to ask in an ATARI forum for help. The people there know the device much better than anyone here on Vogons.

Also I have 0 software for this thing.

I buy very little now but these were cheap(ish) / reasonably local and too good to pass up - a small lot of some Intel dual skt 370 boards (2 x SDS2 + 2 x STL2), assorted coppermine / tualatin cpus and some memory. Be a few weeks before I'm able to pick them up - will post some pics if I remember.

We had exactly the same Planhold 486 DX/2 66MHz system at home. Same case, same keyboard. I also noticed the advert on Markplaats and decided not to get involved, price was quite high already.

I hope you will be able to restore it a bit and I'd love to see pictures of the inside also!

Amstrad PPC512 with all its bits and pieces (apart from original disks) arrived today. Very cool little machine. Sold as parts and was expecting some fix work but it just works😁

Funnily enough I got a broken pc1512
a few months ago that does nothing , not had a chance to look at it yet but will be cool to have the 2 side by side if I get it working. The portable helped with troubleshooting as you can power it from the monitor from the 1512, (unfortunately can't get video as the 1512 has proprietory cga output), but it powers OK so at least I know the 1512 psu is good😁

You can stick a graphics card in the 1512, but you don't see anything until the boot prompt. Not sure if I'm confusing with the 1640 here, was 1512 mono only? But you have to use mono if it's color or set to color, or color if it's mono or set to mono... because there's no way to disable onboard otherwise... probably the pinouts for the "weirdass oversized WTF DIN or something connector" are online by now.

edit: gah, 30 year stale info being dredged up out of neurons in long term stasis, not entirely sure if it came up at the prompt itself or whether I had to type mode mono or co80 to switch it.

Yes it's colour and you can stick a card in to get cga/vga. I was hoping to use the 1512 monitor with the portable as that outputs standard cga but has the usual 9 pin dsub in so can't with the 1512 screen due to the crazy big din, though the psu connector is correct, and I don't think the 1512 pinout strictly matches the cga standard so some other shenanigans are required, I looked to see if I could match it pin for pin but they are only partially the same for the rgb and earths. There is a good blog somewhere online where someone has tried to as they didn't have the monitor or psu for their base unit and it wasn't straight forward, the blog went quiet so guess they got no further. Unfortunately that's the only cga monitor I have so may have to get a cga to scart or something to use the portable in all its cga glory (as opposed to crappy little unusable green led screen) and hopefully get the 1512 doing its own thing.

I remember the days when ones keyboard was that close to the monitor. 😀

This Labway A02150 with an ES1688 chip. I wonder if I can make that IDE port bootable. I saw something similar around here...

Pentium III 1100MHz (Coppermine, and it's a desktop chip. SL5QW.)
SiS 630 Chipset + iGP (not the best but better than i810, I guess.)
20GB HDD
Teac DVD-ROM/CDRW
384MB RAM (which I find it a mystery since there's only one 256MB SDRAM stick - unless the other round of 128MB is soldered onboard, which I find it highly unlikely.)
15" screen that is amusingly bigger than the base itself - it's like they took the base of a 14" laptop and just slapped a 15" LCD on it.
Originally had german XP SP2 (with its own IPC branding on the System Properties), wiped it and installed WinME

There isn't any slot besides the one under the keyboard. I've searched it right now and it's nowhere to be found.

There isn't any slot besides the one under the keyboard. I've searched it right now and it's nowhere to be found.

weird, it does sound like it has 128mb of ram somewhere on the board then, sounds like its a mystery to be solved by some ..uhh creative dismantling.

I'd think IPC had asked Mitac to slightly modify it. The reason I say this is because I recall the original Mitac manual stating there should be 64MB onboard RAM. So, the best explanation I can think of is that IPC (which btw, is from Austria, not Russia, as the rumors were circulating - makes sense since half if not most of their machines are exactly rebadged Gericom, Advent and Medion stuff.) asked Mitac to use bigger chips that would result in 128MB of onboard memory.

That, and also, the original Mitac specs say that maximum CPU speed is 800MHz, but as the IPC specs show, the BIOS itself recognizes higher Coppermine CPUs just fine (no Tualatins as far as I can see, chipset doesn't support it probably, despite the T marking after the model number. And who in their right mind would run a Tualatin on a SiS 630 anyways?).

All in all, it's a neat machine. WinME runs almost perfectly (NFS5 throws occasional "cannot read file x" errors but they can be ignored, most of the times.). Can't for the life of me to get "Beetle Ju" (it's a rather obscure game as well, unless most of you know Alawar, the authors of the said game) to run under 9x - I get a WRAPPER.DLL missing export in KERNEL32.DLL error everytime I try to play it.

This arrived yesterday, Gigabyte GA-6VX7-4X socket 370 board with 833 MHz PIII, tested and working fine so far. Bought this to build a dedicated Voodoo 5500 Windows 98 gaming PC since it's period correct for the Voodoo. Also have a Live! 5.1 sound card on the way, which is the last component I need. So far all the components I'm using were released in 2000 so this will be my "millennium" PC. I'll probably replace the 833 PIII with a 1 GHz CPU though. 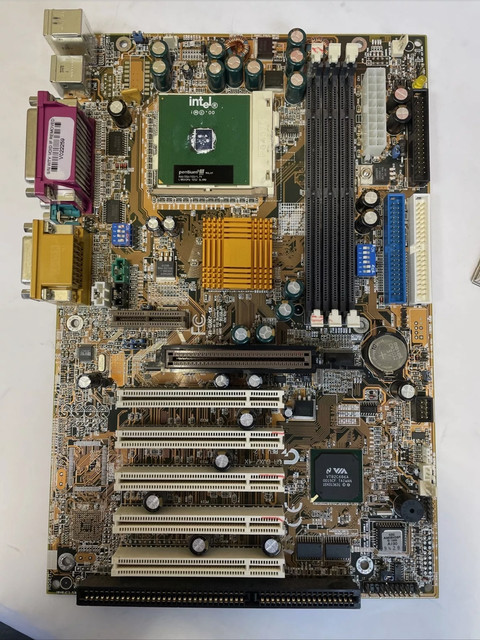