Just ordered a CGA card with Composite out from the well known auction site. Its a "Epson Colour Video Board Model Q505A-E", brand new and with original box. Its for 22€ + shipment and therefore quite OK. There are more of them available.

I hope this card will support me playing with Supersoft/Landmark Diagnostic ROMs. There is no support for VGA and I do not have enough space to have my EGA monitors up all the time. With this card I hope I am able to connect to the composite-in of my DELL 2709W main LCD.

All cards more or less damaged. I think on the sockets an Intel 860 is missing which I should manage to get. Will see what these cards are used for. Most dont have a BIOS, so I dont think they can be used standalone...

Woah nice haul! I had the very top card - I believe it's Diamond FireGL 3000 - with an L-shaped daughter card.

A PowerMac G5 that blinks 3x when booting. Cleaned it up anyways. Figured it has faulty RAM so I got 2x1GB RAM + new PRAM battery for it as well. Pictures https://imgur.com/a/czEZRC8

The SPEA GX and the P24 are 3D Add on boards to the SPEA Graphiti FGA 860. There is an Image of the base board on vlasks site http://vgamuseum.info/index.php/cards/item/42 … ti-fga-860-4-he .Connection is made by the row of Pins on the top of the board, so you received a Piggyback of two boards to insert in your system.

The P39 is the original Spea Fire board, a 3D acceleration board with the VGA looped through like a Voodoo board. the lacking chip is the RAMDAC.
The later SPEA FGA (meaning Future Graphics Adapter) featured a base VGA onboard, so the didn´t need a base video.
All these boards were usually intended for CAD running Autocad 10 and driving 19" fixed frequency monitors which were really big compared to the 14" standard monitors being common at the time.

Really great finds.
The i860 chips will probably be hard to find or just really expensive. I´m looking for a reasonable priced one to equip my Hauppauge i4860 for years allready.
Some of the boards have interesting details looking like engineering samples to me, so the seller was probably a co developer of the boards.
I was able to grab a bunch of similar boards from a developer once as well as a load of engineering samples from ELSA shortly before they shut down.
Let me know if you need any drivers for the SPEA cards. Collecting SPEA cards for the last 20 years provided a large collection of documentation and driver disks as well.

Yes, I also noticed the card on Vlasks site. There is also a picture of the P39 on the german wiki:
https://de.wikipedia.org/wiki/Intel_i860
Therefore the Ramdac is a "INMOS IMSG365G" which is even harder to get...
You can still get an i860 at Ebay for around 30€. There are several sellers. I just took a look in my collection but I only have i960.

Indeed, some of the cards also look like engineering samples to me. There are thin wires all over and soldering on the back does not look very industrial...

Please let me know what I can do with these cards? I assume they can only be used with special applications as AutoCAD but are useless for normal DOS/Windows operations? Therefore there will be no easy way to use/test them anyway as I am not planning to install and learn to use AutoCAD 😉

A friend gifted me a SBC board and I could finally use an industrial SBC enclosure I had: The SBC is a 5x86/133mhz with a CHIPS 65550 integrated vga. I tried Phil's benchmark suite and I get ~41fps in DOOM so it's exactly what was expected from this machine. What surprised is that Keen4 has smooth scrolling in the intro - without any patches loaded, I think it's the smoothest I've seen all these years.
The SBC enclosure has 5xISA slots so I have 4 spare ones. I really want to find the SBC manual , I can see this small box living on my desk 😀

Does it have a breakout for PCI?

Got my salary in the morning and what is the first thing I did? Of course I got some hardware!

First is an AWE32 CT3900. My CT3990 became my favourite sound card after I got the RAM modules for it, so CT3900 is just a better version (true OPL3, no hanging notes, non-PnP). This will go in my Socket 7 build.
Second is Asus TUSL2-C with a Pentium 3 1.4 Ghz. This will replace my P3B-F as a home to a Voodoo 5. Maybe I'll even try Windows ME after I rebuild the system — never used that version extensively, and I don't need DOS compatibility on that machine.

Bought a ZIDA Tomato 5DVX socket 7 motherboard with AMD-K5 PR120 on Saturday. Only realised today that I paid for shipping to my drop shipper in the US (would have cost the same to ship direct - I had changed my shipping address for a best offer I made on a CPU that only ships to the US). Oh well, my drop shipper handles at least half a ton of packages a year for fellow collectors, so it'll be safe. Not sure how useful a VX board is anyway 😀

Picked up this Motherboard with CPU for an absolute steel of £5! It's a Chaintech 7AJA2 which came with a nice 100mhz Athlon 1.2ghz. 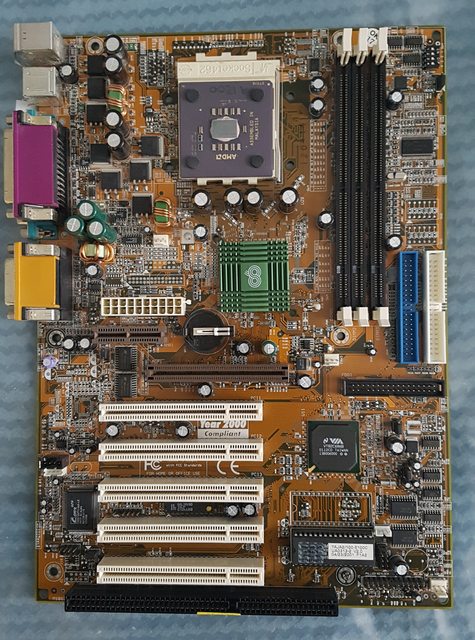 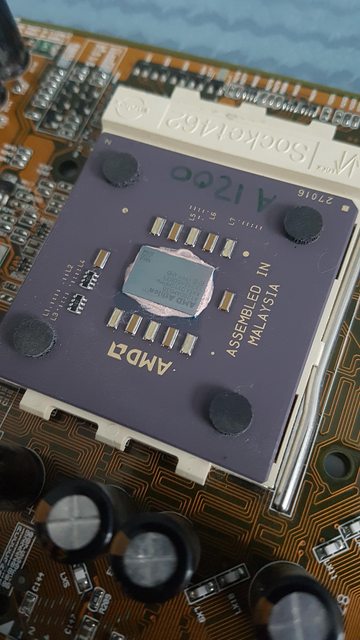 Good to know it wont burst into flames when setting the current date, unlike other motherboards 🤣

Prior to buying it, I already tracked down a bunch of software, guides, etc. for it. Only thing I am missing is the SSDK and LSDK and the associated documentation. Not sure if I am going to be able to find it as the SSDK was only allowed to be hosted on one specific site which of course is long gone and the internet archive doesn't have it... 😒

Apparently you can actually use the onboard wavetable with any game that supports General Midi according to old information I have found where people got it working.

Does it have a breakout for PCI?

nope, the only PCI device is the onboard vga. It's a half-size ISA SBC so nothing but ISA.

It seems the wavetable must be accessed via a TSR as with the AWE series cards.

I thought today was going to be a slow day,with just this stuff to show for my recent adventures: - an ATi Small Wonder (one day I want to see CGA composite artifacts mode...)
- a transistor/cap tester that can measure ESR
- EUR 1 spent on a beige keyboard that turned out to be a Fujitsu FKB4706, so a mechanical keyboard rumored to be even more solidly built than the Model M. Not known for great typing quality, but for EUR 1 anything that works is great, and it does, it has real springs and even LEDs in the keys.

But then I saw an advert for a pile of old computer stuff, with some bad, dark pics showing a haphazard pile of VGA cards and maybe two slot 1 motherboards in the haze. Oh, and a slot loader optical drive. I wanted the latter and random VGA cards and motherboards is a nice bonus. So I jumped at it, and was succesful.

Then I turned up. Turned out that all the hazy black bits in the photograph were also included. This was a local radio station that for the last 20 years had had something of a hoarder doing their ICT stuff. Now they had to move and the new building was much smaller, so they needed to get rid of crap. But what crap... This isn't even all of it: 16 VGA cards, 9 motherboards (many with CPU and RAM), 2 sound cards, 8 other PCI cards, 3 keyboards, 8 optical drives, 14 HDDs, 1 floppy, 1 optical RF mouse - and that's not counting the pile of Realtek NICs I dumped in the giveaway-box straight away, and various cables, two old routers and a USB DSL modem doing a good imitation of a stingray 😜

The boards are amazing, 20 years as promised, from a Dell/Intel SE440BX to an Intel DP67BA So1155. Unfortunately bad caps galore, even (surprisingly) on a pretty recent Intel OEM board...

The highlights for me:
- Turtle Beach Montego II (Aureal Vortex 2)
- an unnamed TNT2-M64 PCI card (because of discussion I had about rarity of these beasts in this part of the world)
- the slot loader DVD
- Abit BE6-II (once I've recapped it)

Oh, and sorry Fujitsu, this 1991 second generation IBM model M wins hands down, even in its present filthy state 😉

Now, when am I going to find time to test the not obviously dead bits, and fix the caps on the latter...?

Are you going to use it under Window 3.x? Or just DOS. No drivers needed for DOS. And I suspect it will work fine as generic SVGA card under Windows 3.x if you really want that.