So, I went to pick up a few cabinets the other day... The gentleman I bought them from used to have a company for marine electronics development and production but went bankrupt like two years ago. He had already sold most of the production tools and parts and was now selling what was left over - office furniture and things like that.
When we entered the building, he told me that if I wanted any of the other stuff, I could have it too... well, yes, I did want some of the other stuff!
In the end I left not only with my two cabinets, but with a bunch of retro hardware as well:

2. An AOpen MX3L MicroATX board (440LX chipset) with Celeron 400 MHz CPU and 256MB of RAM, working and in good condition
3. An AT keyboard by Cherry
4. A bunch of PCI and ISA cards, the more interesting ones being:
a) An ISA Soundcard by Expertcolor with Yamaha YMF719E-S chipset

Since all of this stuff would have ended up in the dumpster anyway, the guy gave it to me for FREE. 😄
The Videoseven system will probably replace my existing Slot 1 440BX machine because the tower is of excellent build quality (as opposed to the one I already have) and I have a weak spot for Epox boards.
The Compaq machine is awesome because it is in nearly original state, but I don't have real use for it...
The 286 case is built like a tank, heavy steel everywhere, absolutely great. Might try to find a 286 or 386 board for it, but this era has never been my top priority, so I might as well sell it. But the current configuration with a Slot 1 board an P2-350 is not particularly useful for me and somehow feels wrong for this case...

Yesterday I made another great deal with some guy who had many AGP and PCI expansion cards on eBay Classifieds for 1€ per piece, regardless of what it was. More on that later... 😉

Do you have a printer to print them for yourself? I'd forgotten about it, but I did design up a replacement bezel to fit the external drives so they can go in a regular case. They turned out pretty well

Otherwise I could print up a few to sell since I've got both the beige filament and the transparent filament needed.

Hi everyone, hope that this new year may bring you all more enjoyment of computer nostalgia.

Today, I received a nice Intel SE440BX2 motherboard. It is a beautiful slot 1 440Bx with a Yamaha YMF740c sound chip onboard:

Time to test and push it into a build 😉

As well as having an SB-Link header, DOS drivers claim the audio chip supports SB-Link too. I would have used this with my C3 Ezra, but the board doesn't support any FSB reclocking or disabling ACPI.

I found a (new?) AMI Enterprise IV motherboard, with all the manuals & accessories. Apparently made in 1995 😀 It has EISA slots and VLB slots, with an integrated IDE/Floppy/serial/parallel adapter, cache and apparently PS/2 mouse support? If this one works, I think it's the right system to use with the Intel DX4 Overdrive 100 I got hold of:

It looks like the RTC battery will probably need replacing. I have no EISA cards and probably won't since I don't especially need them. I'm wondering if I should scan & upload the manual? That doesn't seem to be online anywhere, just the II and III versions. EDIT: Yay, found the Manual online after all, shame I couldn't find that before I purchased it. Having the physical copy is very nice though.

Additionally, I got hold of a CD-ROM drive - bought primarily because I love the box art, but it's in superb and un-yellowed condition so I guess I should put it to use somewhere:

Dude. The CD-ROM drive and the motherboard are amazing. My grandpa's old IBM Aptiva 2168-M55 has a Mitsumi FX-400 installed and still works (eject is a bit slow). The motherboard is really neat, especially with integrated I/O.

Dude. The CD-ROM drive and the motherboard are amazing. My grandpa's old IBM Aptiva 2168-M55 has a Mitsumi FX-400 installed and still works (eject is a bit slow). The motherboard is really neat, especially with integrated I/O.

Awesome mainboard, must have been very expensive when it came out.

One of the rare (only?) mainboards with SIS471 chipset and extra dirty tag ram.

nos inwin a500 case. a nice start to my next build.

Did you pick that Inwin case up from the guy in Texas selling them via Reddit?

Did you pick that Inwin case up from the guy in Texas selling them via Reddit?

i missed out on that but, i was inspired by the reddit post to search for one.
i found it on ebay. listed as generic beige case but, i knew what it was right away.
didn't come in the original box but, it did include the original package of screws, rubber feet and hard drive mounting bracket.

Trust me, I still have two of my five NOS Inwin cases from the 2018 PPro haul and the original box is nothing to write home about. Make sure to download the diagram that comes with the case from my sleeper build post. That came in the box with each case. Kinda cool.

Trust me, I still have two of my five NOS Inwin cases from the 2018 PPro haul and the original box is nothing to write home about. Make sure to download the diagram that comes with the case from my sleeper build post. That came in the box with each case. Kinda cool.

Got myself a nice "little" AT&T 3B2/310 terminal in excellent condition.

So this is a workstation that needs a terminal with a keyboard, right?
My workstation has these connectors on the back, how was it connected to the terminal?
Is is possible to modify a cable to use the 3b2 with a standard monochrome monitor to see if it's working at all?

^ love those small factor systems, they can make some targeted and tight builds 😀

Picked up the motherboard today. £12 win on ebay. Much better condition than expected but absolutely caked in grot, sticks and even bird poop..
Everything looks like it will clean up nicely tho!
I did rip off the heatsink to see what I got and it appears to be a 750mhz pentium 3 (thats what the jumpers are set for)
The only immidiate concern is a scratch underneath has taken the protective coating from a few traces but the traces themselves do not appear to be broken. 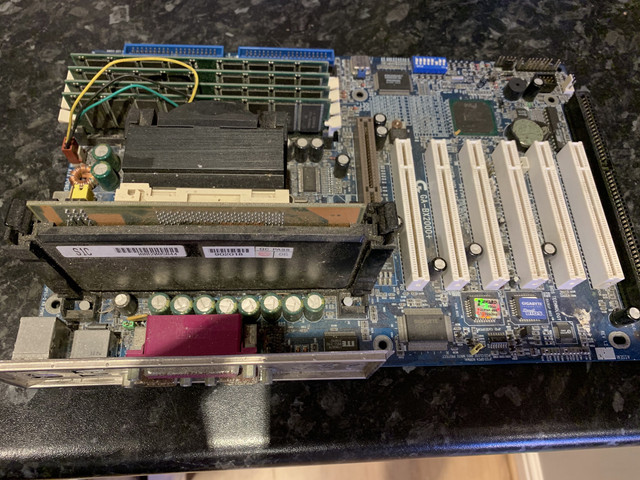 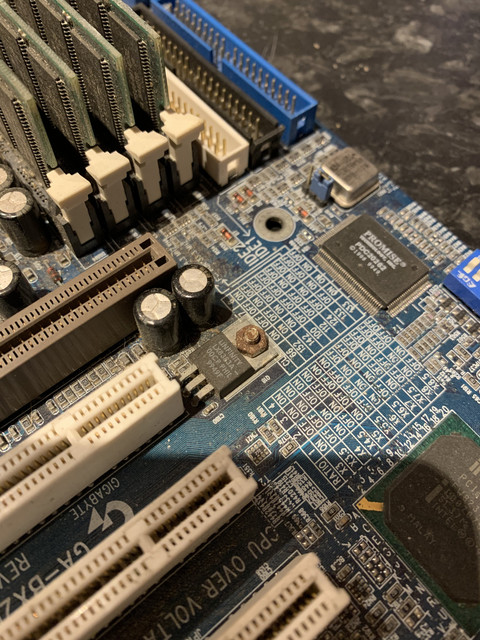 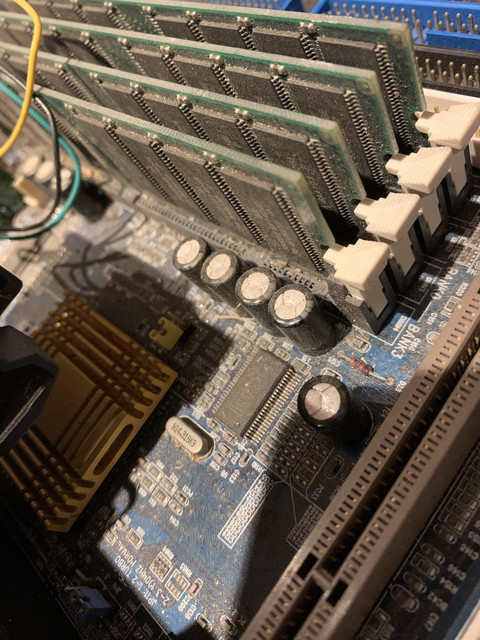 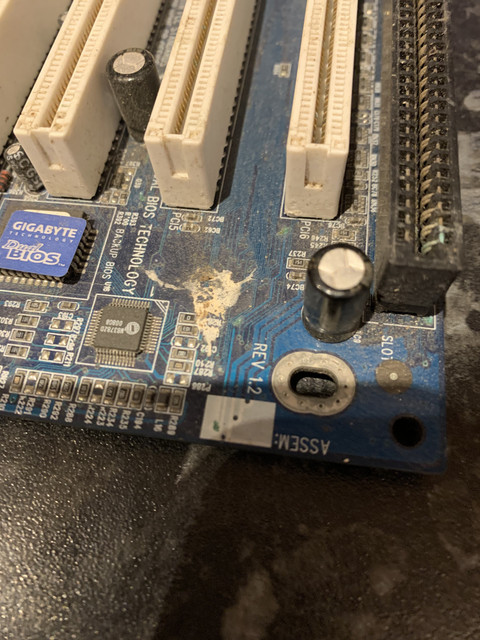 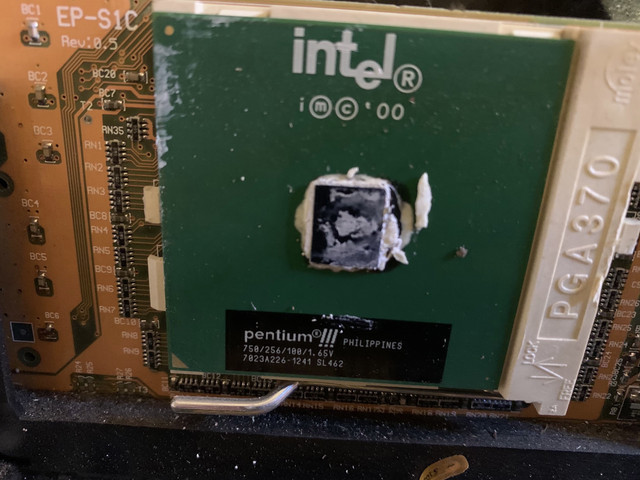 Any advice on cleaning it up?

I was watching that one for months and months... now I really regret not having gotten it ^^, I kept buying other things all the time that there just wasn't enough budget.

I was watching it for quite a while too before finally buying it. Having it now, I can say it was absolutely worth it!

^ love those small factor systems, they can make some targeted and tight builds 😀

Me, too. This will become my ultimate DOS/Win98se machine. Socket 370 with a Celeron 500 MHz installed, 256 MB RAM, S3 Trio3D on-board, one PCI slot for a Voodoo, one ISA slot for a sound card (and probably the system to use my Dreamblaster X2 in, finally). Can't install a CD-ROM, of course, but it has Ethernet on-board too, so not much of a problem when wanting to get bigger files on it.

Suppose this could have landed equally in 'Dumpster Find' as that's where it was headed before I stepped in for the save.

A friend who works for a TV media company offered me the chance on this little scrap lot and, as dual setups are something I'd like to try my hand at a bit more in 2020, I jumped at the chance.

Apparently it was the baseboard in a piece of old broadcast video kit, a Harris / Leitch Nexio Series NX4000TXS Transmission Server. Intrestingly, looking around eBay, these boards (minus SCSI) also seem to have been common in Philips ultrasound equipment as well.