I bought that Spectra 2500 that was on ebay a couple of days ago.

I'm probably being too optimistic. That said, I haven't seen one of these cards for years, so this was still an easy decision. It shouldn't be hard to get my money back.

Bought an external USB floppy drive (tested it and it works), Gamester for the SP (3 games can be inserted with ease), RF adapter for the NES, SNES, Mega Drive (Genesis), N64, C64, Sinclair 1000, and other devices (might work with a VCR using an RCA to RF adapter), an N64 RF adapter so that I can use the RF adapter on my TV set, and the Pelican SDTV/HDTV adapter for my OG Xbox, Xbox 360, and PS1/PS2 (has composite and component, and can be switched between TV and HDTV). All for a low price of $8.16 after taxes.

You forgot the probability of catchinh nCov-2019 from the package 😜

I finally got myself a Terratec Maestro 32/96 that should arrive tomorrow.
Since it was quite a bit of an investment (almost 50€ shipped, which is more than I am usually prepared to spend on single items) I hope that it can meet my high expectations.
The MIDI wavetable part of this card uses a 4MB Roland GM soundfont or at least some sort of subtype (or remake) of it. The statements on this topic that I found on the internet do vary a lot, as well as the statements on the actual quality of the soundfont, although most people say that it sounds exceptionally good. So I hope that I find some time to compare it to my SC-55 soon so I can draw my own conclusions.

Congratulations, you now own the ultimate ISA sound card. I only have the Gold 16/96 and hope to one dawy own a Maestro 32/96 some day..

I finally got myself a Terratec Maestro 32/96 that should arrive tomorrow.

I have one of these but it is very finicky to get going. It really didn't like the motherboard I was trying to use it on, but I did end up getting some sound out of it, and the soundfont sounded really good to my ears, but the FM emulation was weird.

Since it was quite a bit of an investment (almost 50€ shipped...

I wouldn't call 50€ an investment... But the card on the other hand is an investment as even now the usuall price on eBay is around 100€+.

Bought this lot of Apple stuff from a local seller:

One of the computers does not have a HDD but seems to work fine otherwise, and the other has a HDD that is probably on its last legs or really just non functional since it emits these clicks of death and the computer shuts itself down after a few seconds of turning it on.

The mouse is from a Mac classic from what I can tell.

Since it was quite a bit of an investment (almost 50€ shipped...

I wouldn't call 50€ an investment... But the card on the other hand is an investment as even now the usuall price on eBay is around 100€+.

yup, that's quite a good price actually including shipping... though I share the sentiment of not spending more than ~50€ on a single card usually my limit is even less unless it's something rare I really want... hence why I have a lot of variety in my collection, but not many of the really sought after ones ^^

Yesterday I received a unexciting keyboard overlay for my Timex 2068. I was hunting for this for a long time, and the Gray colour doesn't help eider, they seem more elusive somehow .

Fortunately a Ebay seller surfaced on my search, and now my Timex is whole again.

Seller photo, what looks like a dirty IBM Model F. Got it for $30 shipped, we'll see if it works when it gets here. I'm sure it will need a full disassembly, cleaning, and refurb. ^ looks like the keyboard for the IBM portable 5150 to me

the portable keyboard has a different enclosure.

Today I did a Cex Gamble. No, you haven't accidentally stumbled upon that other forum I only frequent on weekends; Cex is a electronics and games shop in the UK where you trade in your games and electronics for cash or a in store voucher. However, it's a gamble because the prices are significantly cheaper than eBay but the shops are staffed by disinterested and edgy teenagers who may or may not pack all 4 disks of Flight Simulator 2004 and may or may not actually have tested the GPU you just bought from them before they took it off another customer. The item description won't say anything other than the memory size and model. The picture will be a stock picture. And I can't say I blame the staff given the clientele they put up with as the shops do tend to the aggressive and smelly people in town. You can pick up various C2D for less than £1, RAM for similar, basic GPUs for a tenner. I think the best value at the time was a GTX260 for £12.

Anyway I had £23 in vouchers and needed a cool, quiet, efficient and moderately powerful GPU for XP gaming. I bought an Nvidia GT 340 (continuing with my theme of buying weird OEM cards) which is identical to the 240 except more likely to come with GDDR5 VRAM. This cost me £18. With my spare £6, I picked up an ATI X600 Pro, on the hope it would be the All in Wonder version, which I've not messed with.

They arrived in quite big boxes (probably from separate stores)... a good sign that they might be wrapped reasonably. 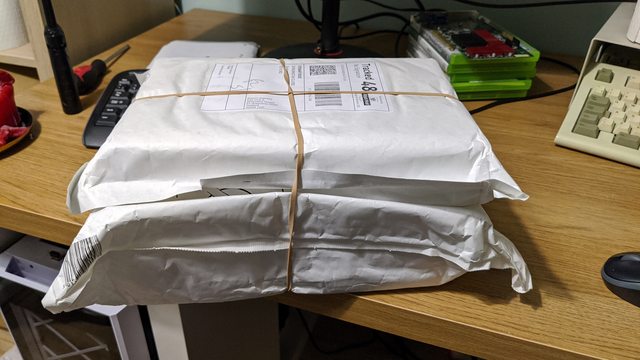 OK, the smaller one is a tablet box, hopefully they've just repurposed it... 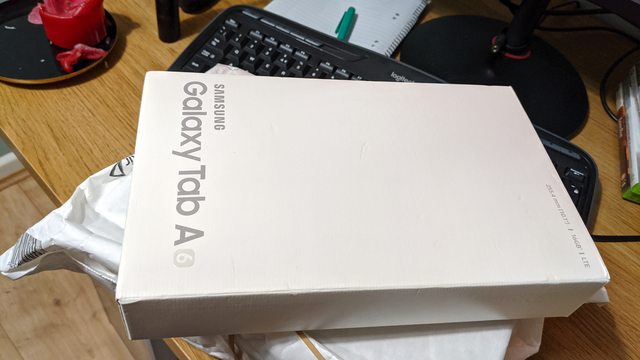 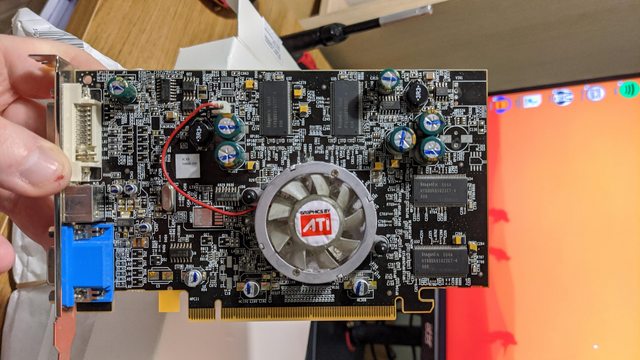 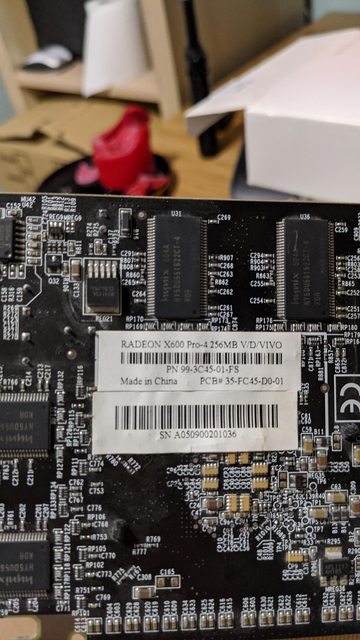 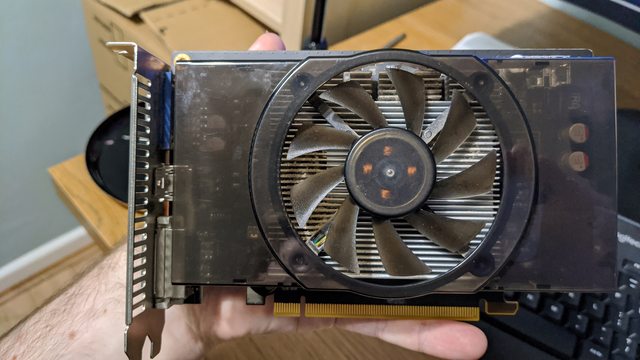 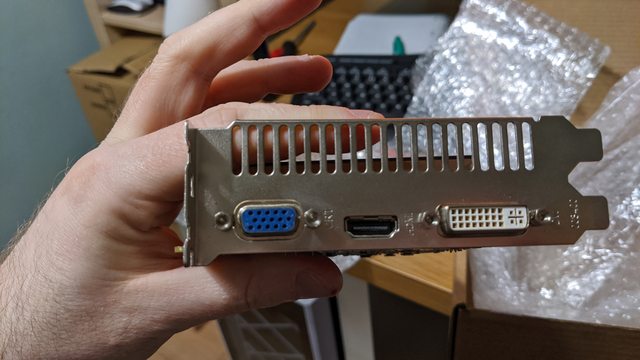 Useful selection of ports. This might actually overclock with the cooler and GDDR5. I've got some little memory heatsinks I can put on the RAM (not sure it would help...) Limited by having no external power I suppose.

Got a haul of free parts today. 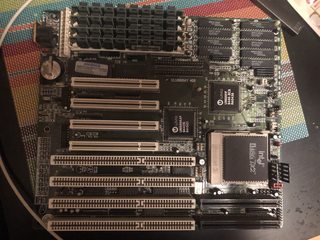 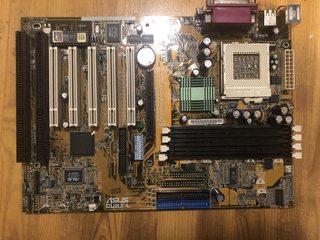 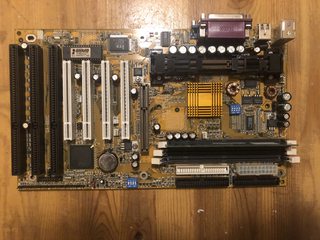 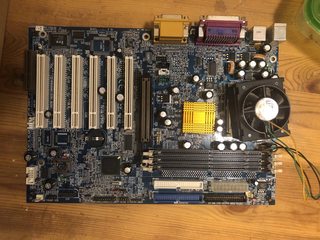 Finally, some video and sound cards. A Matrox G250 (probably the only card I really like out of this bunch), a Matrox G4+ (16MB), a GeForce 2MX, an ATI Rage 128Pro and two Ensoniq-based PCI SoundBlasters. 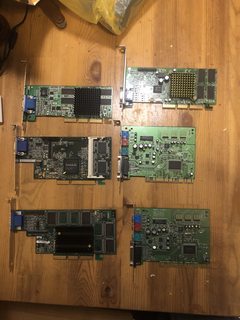 Fake cache chips is molded in characters, not printed on. Had seen that.

Lol, that cache is extra fake. No real cache chip comes with Write Back stencilled on the top of it. I've got one of those boards as well, a bit cantankerous to get going well, but works OK once you find the right BIOS and jumper settings.

I have one of these too and yep, fake cache like yours. From what I understand it's possible to solder in real cache and flash the BIOS to stop lying about it and use the real thing - so far the motivation to do the work hasn't materialised but it's an interesting board so maybe one day I'll do it.

Oh right, another type of fake "write back" how I could miss that?