Anyway, I just wanted to add that anecdote. Nearly the entire Nforce line of products were released during the capacitor plague era, which is very unfortunate. And once the plague was nearing it's end, bad solder was an issue on later chipsets (like the 600 series with the IGP). Definitely not a surprise that nvidia left that market after that mess. I still think the Nforce 2 Ultra 400 was a great chipset at the time and they were plenty of great boards out there that used it. The Nforce 3 Ultra and Nforce 4 chipsets were also rock solid (other than Nforce 3 AGP support in Vista+... grr). Whether they lasted was entirely dependent on if the manufacturer picked the right caps or not, but this was the case with all other boards from that time period as well. There just weren't many nforce boards made outside "the plague days", so you're just as likely to find one that needs new caps as one that doesn't.

Well, nVidia got out of the chipset market not because of the RoHS lead-free switchover or the capacitor plague - it happened because they were frozen out of x86 for the most part. They only had an agreement with Intel for chipsets up to the Core2s and the first Atom, the AMD market doesn’t really exist anymore since AMD ship their APUs with practically everything (well, so did Via, really), and there’s no perceived benefit to an nVidia Southbridge.

Yeah, the nForce 2 was a good chipset, as were the MCP79/ 89 on the Ion netbooks / Penryn MBP13s/MBAs. It’s too bad It stopped after QPI became a thing and nVidia is not allowed to make platform controllers (like the rumored MCP99 for Clarkdale/Arandale) for it.

I bought IDT WinChip C6 200 MHz for $10 incl ship. The processor legs are not straight, but the CPU itself is in working condition. My plan for the CPU is to fix the legs and get rid of that sticky glue from top.

The second item is the motherboard - Gigabyte GA-7N400S with yellow Socket 462 😁 It is brand new condition, but I/O ports cover is missing for some reason. It is nForce 2 mobo, supports Athlons, Durons, Athlon XPs and Semprons.
Price: ~ $9

Brand new with clearly defective capacitors, you can see the tops blowing on two in that pic.

Make sure to memtest the hell out of whatever memory you put in there (after you repair the board). I have yet to experience an nforce 2 motherboard in person that can run memtest86 for any appreciable amount of time without errors, I think all of them are just straight up trash.

Indeed, but replacing capacitors are not a problem for me 😀

After some testing and fiddling, what I got functioning from it are the CPU (Celeron 300MHz), Mainboard (BX98-3D), two sticks of SDRAM, Rage Pro AGP graphics card with RAM upgrade, a 4.2GB HDD, a floppy and a CD-ROM drive, so basically a functioning system. Nice

After some testing and fiddling, what I got functioning from it are the CPU (Celeron 300MHz), Mainboard (BX98-3D), two sticks of SDRAM, Rage Pro AGP graphics card with RAM upgrade, a 4.2GB HDD, a floppy and a CD-ROM drive, so basically a functioning system. Nice

That's really awesome you were able to recover all of that. Is the case salvageable or just a lost cause?

My PCIe PhysX card for my 8800GTX SLI rig came today. I didn't expect to get the boomerang edition. Sellers really need to understand they can't just stuff things like this in a 5x8" bubble mailer.. 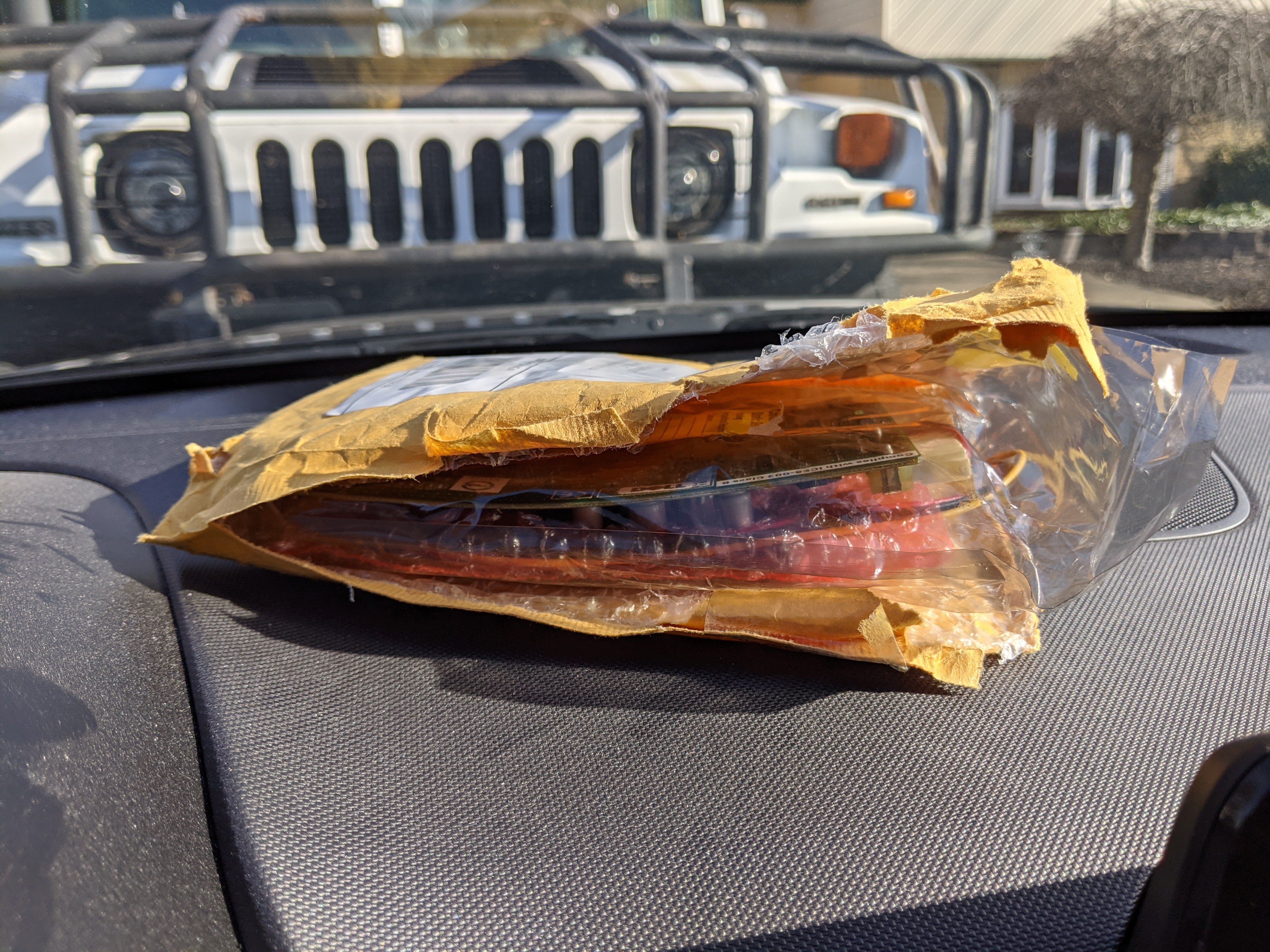 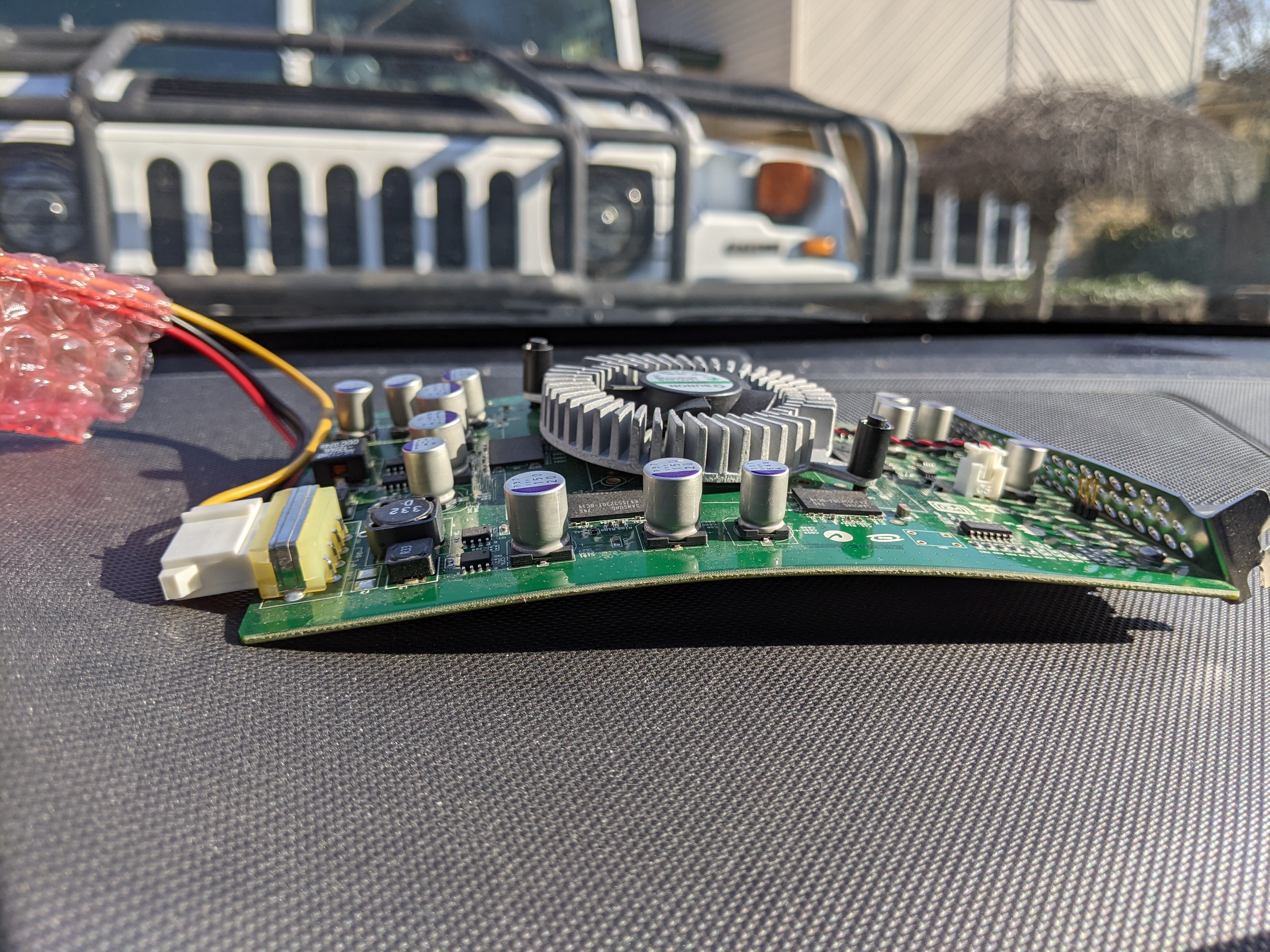 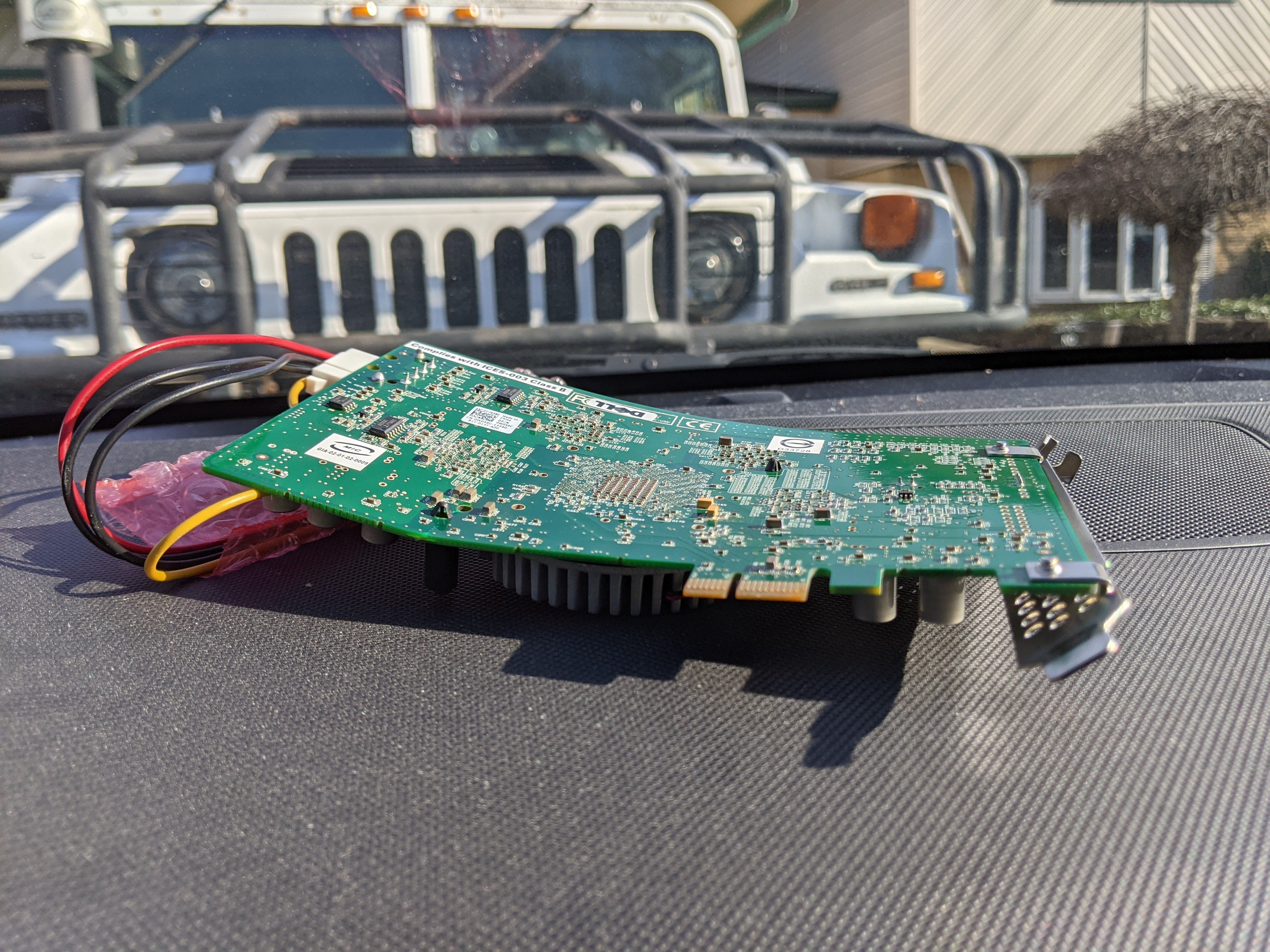 My PCIe PhysX card for my 8800GTX SLI rig came today. I didn't expect to get the boomerang edition. Sellers really need to understand they can't just stuff things like this in a 5x8" bubble mailer..

I hope you get a refund for that.

Honestly, as fucked up as that card is, even a box would not have helped. That was deliberately destroyed by the mail system.

Agreed, you need quite some force to accomplish this unholyness.

Bought IBM 300PL, but sadly with some damages on the case. However it works fine. I also got one Pentium 3 and one Celeron 3 complete systems. After a few beeps I got both systems booting fine. The cases frome Pentium 3 and Celeron 3 systems were pretty damaged and jellowed, so I decided not to keep them. I am running critical with storage space too. I removed everything from the casses, I even kept the plastic front of the cases. All that was left was metal chassis. Other components on the photo were in the systems. In the price I also managed to bargain a Radeon 9800 pro, which I hadn't had a chance to test it. Hope it works.

Plug it into a sacrificial motherboard and see if it works!

Agreed, you need quite some force to accomplish this unholyness.

I agree that it looks worse than would normally be expected, but there's no way that it would have been as bad in a box unless the box was as soft as a bubble mailer. It looks like it got wrapped around something or crushed over the corner of a box or some part of the sorting system. This wouldn't have happened to a box.

People can be really dumb with the way they pack things. Miscalculating the durability of a box or packing material and having something get damaged is an honest mistake. Thinking that an irregularly shaped circuit board will survive through any shipping service in a soft bubble mailer shows either completed ignorance of how physics works or a total disregard for the item being shipped (and the recipient).

Recently, a guy I bought something from shipped a heavy video card in a beat up amazon box LOOSE with two air bubbles... the ones you use to pack light things, that pop and are useless. No antistatic bag, no bubble wrap, nothing. When it arrived it was loose in the box and only one air pillow still had air in it. Hilariously, he told me he worked for amazon and knew how to package things. I believe him, because this *is* how Amazon packs things. Except they don't sell loose circuit boards! Especially ones that often sell for $300-$400.

Holy crap that poor PhysX card it didn't deserve that. Was the delivery guy trying to wrap the card around a pipe or something.

Probably a round mailbox.

This made me curious, as I have an overclocked Abit NF7-S 2.0 system that has been used, in some capacity, almost constantly since I built it 2003. I just ran memtest on it for the first time since I last tweaked it about 8 years ago. It ran for 50 minutes, long enough to do a full pass, plus some. No errors detected. I don't do anything super critical on it, so I didn't feel like running it for a 24 hour test, but I've never had stability problems with it.

I sold computers for over 15 years (owner/operator of a retail store, sold new computers and repaired old computers) , all kinds of junk will pass memtest for an hour. I used to think a single full pass of memtest86 was sufficient and then I started getting people calling me saying their new Athlon XP/nforce 2 computers were bluescreening. Ultimately I threw out at least 90% of the nforce 2 MSI and Asus boards I sold, I took almost all of them back from clients (only exceptions were people I could not reach) and replaced them with VIA boards. I took a bath on that trash!

When those boards started causing clients problems I came to the conclusion they sucked when every single one couldn't pass memtest (or the microsoft memory diagnostic program in extended mode) over a mere weekend, I'd start running memtest at 5pm friday and come in Monday morning and they would always have errors. This was with every damn kind of ram I could order from distributors! Kingston, Crucial, Corsair, OCZ (fuck them for other reasons), etc.

Maybe Abit somehow made their boards better, none of my suppliers carried their boards when I was in business so I never got to be hands on with an abit nforce 2 board.

Oh also I always found the nforce 2 boards I had access to were more stable (but still eventually failed memtest every damn time) with 1 stick of memory in that third slot that was spaced away from the 2 meant for dual channel.

That's pretty bad. I'm very glad that hasn't been my experience, though obviously mine is only one.

I do think it's funny if you go back to motherboard reviews of the late 90s and early 2000s some sites (like Anandtech) actually comment on how many crashes they experienced compared to other boards. Those were certainly crappy times for hardware stability when it was "not bad" for a board to crash maybe once every 6 hours. I'm surprised anyone even noticed there was a problem. I don't think any of my systems were that bad (if I stayed away from DOS games and crappy DOS sound card drivers).

I know that running memtest for more than one pass is important for stability testing. I run memtest on my primary machines for several hours after making RAM changes, but I've never really run into stability problems on most machines that warranted running memtest that much. I did a few times over the years, but it was always RAM.

A few humble cards unearthed in a junk shop today. I have an XP build in the pipeline, so the Audigy will be good for that.

Has anyone ever seen an Audigy SB0090 with a sticker on the chip like that? I'm not finding any via google image search.

saw a reasonably priced vibra 16 ct2260 with a ymf262 chip onboard so i snatched it up to go in my 486 when the parts show up in the next week or 2. i have been curious to see how these sound. hope its not too noisy!

For $30.00 and a long drive, I purchased four motherboards, two cases, and three video cards. Two Aopen boards, both of which are interesting; one is a Pentium M board, the other is a Pentium 4 775 AGP board. And a pair of industrial Pentium 4 boards. I've tested three of the four boards so far and they have all POSTed. And the video cards are PCI Radeon 7000 64 meg DDR cards. The one P4 board has a 3.0 with hyperthreading CPU, and I'm guessing the other does as well. The only auctions I could find on Ebay for the Socket 478 boards were ridiculously overpriced. And the Pentium M MATX board is apparently so rare that I couldn't find a listing to give me any idea of what it might be worth.