These are awesome - I have the slower ones.
Nicely built and the lightshow is cool.

Unfortunately the other Hard disks(IBM) seem to have 80pin SCSI connectors or are SAS.

Unfortunately the other Hard disks(IBM) seem to have 80pin SCSI connectors or are SAS.

Do you have more pictures of this computer especially of the front bezel? This looks to be the same case model as one of my 286 PCs. It has a Soletek PSU as well:

Bought a lot of hardware. Not everything is tested and photographed: ISA sound cards (SB Pro, SB16 Vibra, Mozart,...), VGA cards (Cirrus Logic, Oak,...), some IO cards, Voodoo2 12MB + loop through cable, optical drives ,hard drives and floppy drives.
Quite a few boards+ram+cpu too going from 386SX (still need to find out which board it is exactly. Help is appreciated hehe. It had damage from a leaking battery but I removed it and cleaned it up) to P3 500 slot.
The board with the IBM 6X86 had a dead cpu it seems so replaced it with a Cyrix 6x86 PR166 with Cyrix branded cooler 😀 Only thing left to to is test that 486 board. It had massive damage from a leaking battery but I need to transplant a CPU from a system in order to test it. I really hope it works too.

Do you have more pictures of this computer especially of the front bezel? This looks to be the same case model as one of my 286 PCs. It has a Soletek PSU as well:

Here is the auction where I bought it (there is a front bezel pic there - I didn't took any photos yet): https://allegro.pl/oferta/komputer-z-procesor … -286-7750777833 it seems this case was extremaly popular as I also found this youtube video: https://www.youtube.com/watch?v=_PWz4xS_m2Y&t=329s
Also this soletek PSU seems very well built - fan is still quiet even with the amount of dirt I found inside and general layout and components inside seem very solid (and believe me - dirty it was, because this computer turned out to be a nest of moths of some kind - plenty of small cocoons under the motherboard, in the PSU and so on). Thanks to SW-SSG for correcting me. Kinda rare thing, since there's a TONS of various 9600s around (or, in some occasions, 9800 SE), but i was lucky enough to get this one. Especially lucky because i found this card in my city, not far away from place where i live, and it was quite cheap. 😎 Never heard of this card before, but i guess it's save to say that it's something like S3 Trio64. I know that MX family of Geforce cards is not rare at all, there's millions of them floating around in various marketplaces, but MX460 would be probably one kind of exception. For me - it's a great find, since PCI versions of 128 are much rare than AGP ones. I suppose. A card that probably can be a good choice for "Late Win98 PC Build". Also, black Palit? I know that back in the days they used mostly purple PCB, then they switched to red color. I guess i finally completed Stealth III line (since i also have S540 16mb and 32mb versions). Now for full Diamond-Savage experince i must look for Speedstar line, and I hope that i'll find Z200 someday... 😀 Also good find for me, although i already have 16mb Pro version. But, hey, this is LT version, and this card was made on black PCB (16mb version have yellow one), so for me - they're completely different. 🤣 This is 4mb version, since there's also 2 memory chips on the back of the card. Interesting (and weird) enough that Flagpoint also did 2mb version. In conclusion - 2018 was a very productive year in terms of my additions to collection, and i hope 2019 will be same. 😈

Actually the 128 VR with 64-bit memory bus, but 32MB of memory nonetheless.

Actually the 128 VR with 64-bit memory bus, but 32MB of memory nonetheless.

This means only one thing - i'm having bad luck looking for good Rage 128 GL, or Rage 128 Pro with 128-bit mem bus. And i'm not even speaking about MAXX. 🤣
Thanks for correcting.

I need to find a Savage4 PCI of any kind myself, one of these days 🙁

Not quite. It's an InteGraphics (IGS) CyberPro 2000 chip, pretty obscure even by mid-1990s standards. No idea about performance or compatibility, but the internet is littered with people looking for drivers for it...

After not getting a lot of vintage hardware for a while, I've found a ton of stuff lately. Haven't even had to pay that much for any of these.

From one lot:
4x Jaton TNT2 M64 32MB PCI (early nvidia PCI cards are getting scarce... this was a great find!)
2x Pentium Overdrive PODP5V83 (couldn't believe it when I realized which ones these were... all the pins are intact after some straightening too... 😲 )
Geforce 3 Ti 500 (several broken SMD parts on the back... probably fixable but would require a lot of research)
S3 Savage IX
Ensoniq Voodoo Banshee AGP
AccelGraphics Permedia II 8MB

From other lots:
ESS AudioDrive ES1869F + ES689F with ES981P 1MB Wavetable
CT2770
STB Horizon Cirrus Logic GD5426 2MB VLB VGA
Hercules VL Bus Dynamite Tseng ET4000W32p 2MB VLB VGA
SoundBlaster AWE64
Turtle Beach Santa Cruz
Voodoo 5 5500 PCI (damaged... looks like someone tried to pry one of the VSA-100 chips off the board... really really sad, might make a thread about this one... at least they included the heatsinks)
Reveal Sound FX RV82C929KT with 1MB Crystal Wavetable (I think this is called the FX Wave... not 100% sure)
2x Ensoniq Soundscape Opus with 1MB Wavetable
Diamond Monster 3D II Voodoo 2 8MB (has a broken cap on the back, should be an easy fix... has 100Mhz RAM)

So item did not match the pics in the listing, at first I was ok, cant complain if I got faster ram than what I was bargaining for,

That's common problem with Samsung memory on DFI boards. Tweak Read Preambl and Async Latency timings.
Although they just might be faulty. More reason for a refund.

Damn, guess I should contact him again and see if he has the 400 2225 sticks from the pics and make him exchange them.. 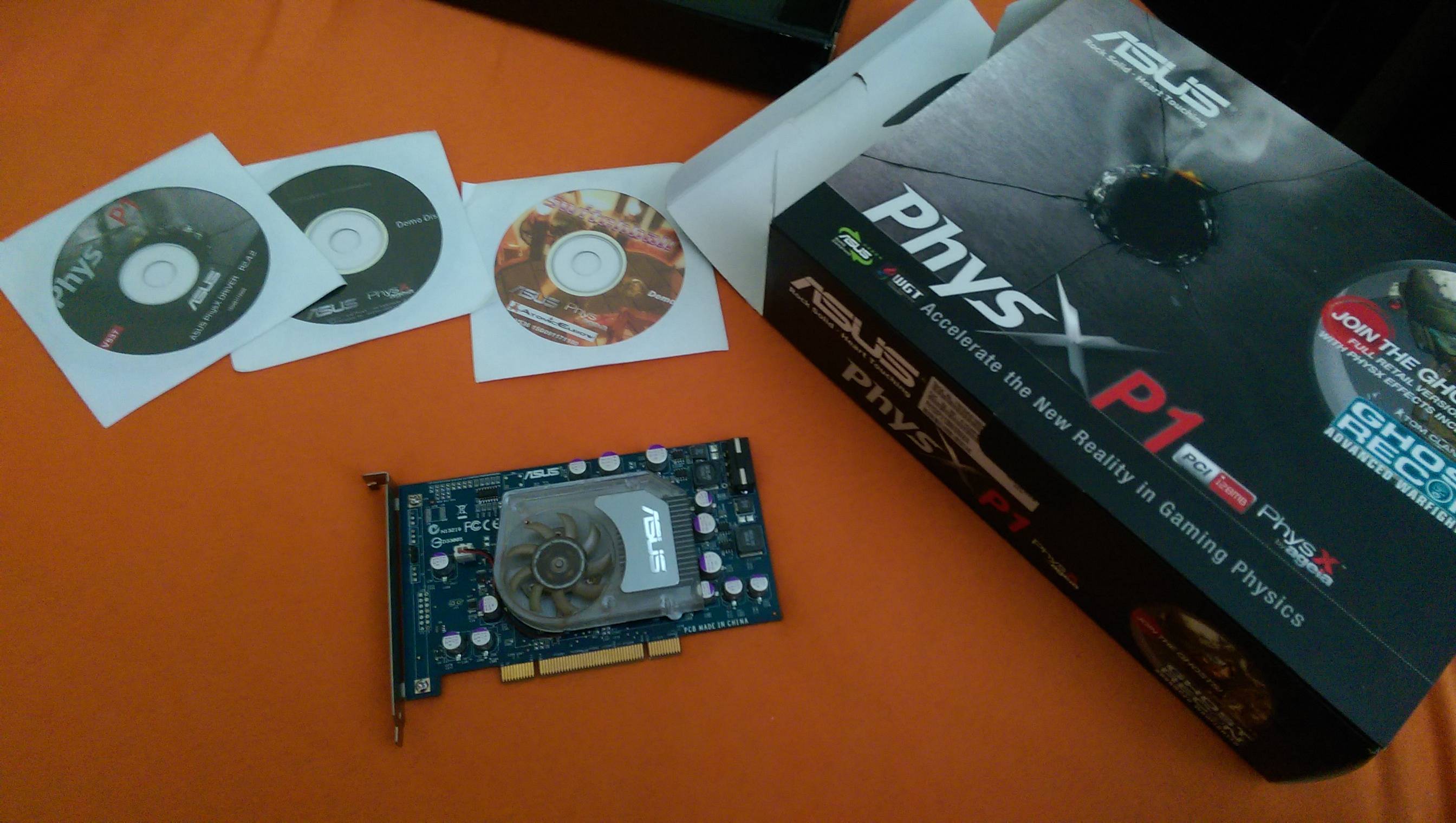 P.S. tested the card with CellFactor: Revolution, the physics work but the game runs like ass, looks like this PC with Athlon 64 3500+, 1gb ram, 7900GS and Audigy 2 ZS is not fast enough for it

Got these things in the mail today. One IndivisionECS V2 scandoubler. There are an extra socket in the box, and I suspect that it is for mounting in an Amiga600, in order not to shorten out. Sadly it can not be stacked like V1, yet the good part is that they have integrated the Denise in a type of FPGA solution. The standard output should as far as I read, be set at 72hz. There should be even more features, like flashable firmware. This is all I know about it so far....

The other things that I recieved, is a 512k Kickrom fixer and kickrom stabeliser board for Amiga500 Revision 5 boards. Installing it, will make the machine compatible with 512k chips, and it should get rid of the machine hanging on coldboot and other Kickstart related issues. The screws are a set of case screws for Amiga500 and the contact is just to have a spare for some future Amiga related project.

Sadly it can not be stacked like V1, yet the good part is that they have integrated the Denise in a type of FPGA solution.

Honestly, though, would you have stacked it anyway? I never did with my V1. Good for Amiga expos and presentations I suppose, but many solutions for that.

Sadly it can not be stacked like V1, yet the good part is that they have integrated the Denise in a type of FPGA solution.

Honestly, though, would you have stacked it anyway? I never did with my V1. Good for Amiga expos and presentations I suppose, but many solutions for that.

Not quite my birthday yet, but parcels coming in thick and fast today, including my first big-ish load of random old crap since the huge one last month: This caught my eye because of the Aztech Waverider 32+ in the middle. I already have one (in fact I previously had two and parted with one of them) but as it's one of my favorite cards, I couldn't pass up an opportunity to nab another. The WD ST-506 controller was also interesting. I was hoping for an RLL controller, but this is yet another MFM one. Oh well, better than nothing, and a relatively late, compact and hopefully reliable bug-free design, plus it comes with cables. The two 3Com NICs are always useful, and the third Accton one isn't too interesting in itself, but has a bootROM. Apart from that a nice 200W CTX AT PSU. I was hoping the other one would be AT too, but it turns out to be a 300W Maxpower (the horror!) ATX that had a loose AT power switch cable draped over it on the seller's pic. It clearly failed as someone tried to fix something, and stuffed the ATX cable inside it. Binned that straight after taking the pic. Nothing else really interesting, except for the jeweller's monocle magnifying glass thingy - that's truly useful for reading small components. The "Teach Yourself Linux in 24 hours" from 1998 is amusing, but given it's all bad-quality photocopies and we already have O'Reilly stuff from the same period on the bookshelf it will also be recycled.

One thing I couldn't quite figure out - this cable: It has a Sony-branded tag and the PS/2 connector has "PS/2" on it, so it looks like keyboard or mouse. But what is the connector on the other end - and what would that plug into?

Then the other three parcels that arrived: So775 doesn't feel really retro, but this Intel DQ45EK board is already almost 11 years old, as is the Antec case I bought to put it in. I already had CPU and RAM. Up to now I used the same (Core i3) system for home server and HTPC, but that's getting impractical, so the i3 goes into the study and this will take over with a C2D E7500 in the living room.

Not exactly hardware, but I'm delighted with this find.

It's the cutest little monitor you've ever seen!

A floppy disk case! How charming!