i tried to put an Gainward Nvidia GeForce 6800 GS 512MB NA/6800GXTD52-PM8370 gpu into an abit vp6 but the bios didn't agree. I therefore put it in a hot Prescott machine (foxconn agp Socket LGA775) it runs at 8x but its set for 4x for stability with the slower than DDR2 memory running at 400mhz.
That tower came with windows 7 but driver support dried up in xp so it was so much happier when i put xp on it even the usb hubs built in started to work. I guess due to SATA 150 built in I may even set up a RAID 0 one day for a kick I mean it has 2 threads and a 1000 watt PSU it gets warm maybe kick out the prescott for something cooler i dunno but its stable anyhow so I am gonna have some more fun on mr prescott the hair dryer 🤣.
These Socket LGA775 / AGP 8X boards are not in abundance these days everyone moved onto vista and seven and forgot them or threw them away that time was when PCIE first came out all them old cards were simular sizes to agp like 128, 256 , 512mb 🤣 still under $20 on ebay those PCIE
i wonder if Socket LGA775 came out before PCIE

Just a question: what bench can i test this gpu for free to see if its healthy? under xp please?

I ran this bench it raised its temps but survived i'm more confident my card is good.

Had a retro moment on my current Ryzen hexacore today. I still swear by Microsoft Trackball Explorers. They are great and they are fortunately solidly built. But after a couple of decades of daily use things start to fail.

The past few days, the right mouse button on my main unit was getting less and less responsive until today it basically completely failed. So disassembled it, found a loose connection and gunk. Cleaned, re-connected and started to re-assemble, until the plastic of buttons 4 and 5 shattered. I had been very gentle, it had just degraded to the point of being too brittle to be handled. Tried to super-glue it but that changed the length subtly and it no longer fit...

So I grabbed my for-parts spare, one that had had a cup of coffee poured over it then dropped. Bad scratches on the top, missing RMB plastic and lower PCB polluted, but otherwise much newer. Took both apart and basically merged lower half of the used-up unit with upper half of the spare. End result on the right, bad bits on the left.

Some issues with scroll wheel though so need to open it up again. Worst-case I still have one more heavily used ones and two basically new spares. Am seriously considering finding a 3D scanning service so I can disassemble one of them to scan every case part for later manufacture if it fails - even unused plastic gets brittle and the day will come when the last unit crumbles. As there's no sign of a decent replacement (and yes, I've tried pretty much every alternative out there), I want to be ready.

Edit:
Yep, scroll wheel completely died after replacing the parts. Now had to re-replace with the old one. All working now, thankfully.

Messing around with Abit NF7-S with a 9600XT, took ages to find memory modules that would work with decent stability...

Framed couple of old press photos to put them on display in my retro cave. Usually I'm not at all into collecting photos, but I own the machines in these photos, so I tought that's cool. IBM PS/2 Model 30 and Model P70.

It looks much better in person, photo doesn't do it justice. Frame I picked up from a fleamarket.

Markings from the backside.

"The Model 30 is the link between the personal computer and the new Personal System/2. With its Intel 8086 microprocessor clocked at 8 MHz without a waiting cycle, its integrated functions, e.g. the new MCGA screen interface, it offers a spectrum of performance, that is higher than the IBM PC XT."

I'm so happy i got once of these
i was scared of not booting or broken, but it worked at first try. 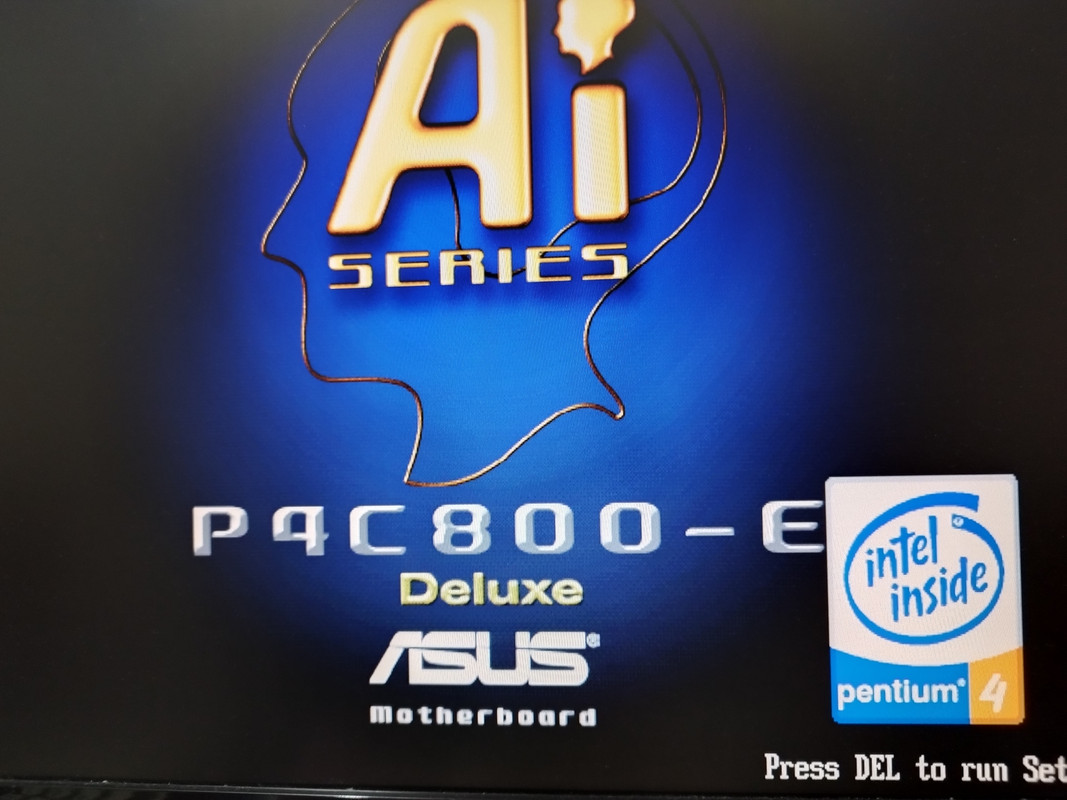 Great motherboard!
And if its anything like mine:
Re: Bought these (retro) hardware today
It's gonna need a recap eventually.
Just a few weeks after I tested mine some caps started bulging.

Also, the V-droop mod is highly recommended if you are going to overclock.

I remember doing it when that board was new. ^.^

wow you even got the box and everything! i was able to get this board very cheap with io shield but no box (about 20 dollars for everything) and it came inside a chieftec dragon case aluminum. I think the owner sure knew about OC because it came with a Pentium 4 HT 2.8C , SL6Z5 (M0) included. Mine i think has different color caps than yours, mine the motherboard is revision 2.0

since you have the box, is this the exact cd it came in your box? https://archive.org/details/ASUS_P4P800-P4C00_drivers

because i know asus also released a p4c800 without the "-E" i want to know if the cd is the same, or if its different, perhaps you can help me by uploading an iso image, i really like to have the original cd contents just for fun installing experience.

Yea complete in box, it wasn't new in box because I noticed some dust on the board.
But as near as.

This is my CD: 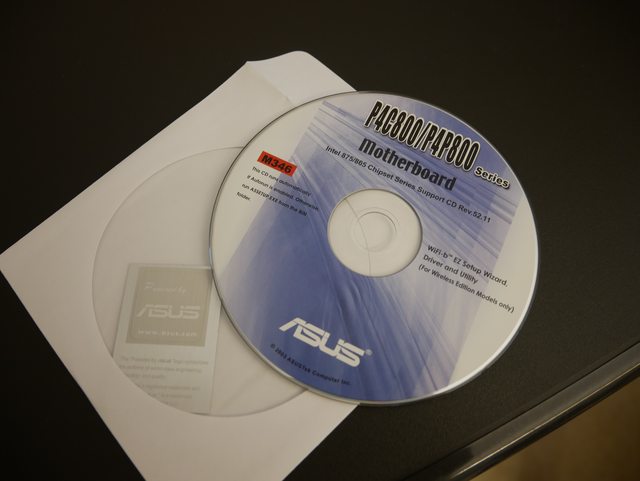 So a slightly older version then the archived one.
And IIRC the -E stood for "Ethernet", not necessarily the inclusion of one but in this case the -E models get an Intel "CSA" NIC vs the non-E getting a realtek.

thank you so much!
sometimes it's all about building a retro PC and installing it's drivers cd, it's like a trip un time

Put together the case and board i got these past days, it came with a Cyrix DX4 clone and the award bios started it's repeating high pitch beeping aka CPU overheat. It has a heatsink and fan that i confirmed is working... Going to check it tomorrow and repaste it (who knows how many decades since it was applied). Hope that solves it otherwise I'm in for some debugging. I did check the PSU before ever powering it and it works perfectly (in fact it was brand new in box with the case). Guess I should double check the jumpers again, but im fairly sure they are correct for a Cyrix DX4 100MHz as by the manual

screwed up my w98 install with wrong ide controller driver and now it won't boot even to safe mode. i am so pissed right now. 😁

I bought the June edition of Swedish PC Gamer from 1998. Read about upcoming games like Diablo 2, Baldur's Gate and Ultima IX. I have never played the Ultima Series but it a really seems quite cool.

I get really nostalgic reading these old magazines, and wish I kept them.

Of course it did not come with the demo cd but possibly I can find it on archive.org. It contained a demo of the Swedish racing game Motorhead that I remember had very good graphics. Not that racing is normally my style but maybe the demo would be fun to try again.

Many years ago I purchaced an Amaze HD3650 AGP Brand New on clearance from MSY Clayton (local parts chain shop). Australians will know MSY from their parts.pdf pricelist

I haven't ever used the card in a build, but decided to do a Fast AGP build with a Sempron 2800+ Socket 754.
After the AGP Hotfix drivers were installed, games would run, but crash shortly into the game, with the VPU Recover function detecting an error, including benchmarks like 3dMark2001.
I tried all the many variations of Hotfix drivers, but not could resolve the instibility. Tried disabling Fast Writes, AGP 8X, Calibration Cycle.... Nothing helped
Tried other systems like P4 3.2 etc, all wth the same results. I concluded that the video card was faulty.

I then was looking in the Catalyst drivers, and noteced that the card ID mentioned it was a 1GB model, when this was definately a 512MB version.
I then through about all those recent "Wish" fake flashed cards and the similar chashes they created....... I deceided to flash this card.
Found a Visiontek HD3650 512MB AGP BIOS on techpowerup, and flashed it....
Low and behold, the card now works flawlessly.
The Visiontek was clocked much lower than the Amaze, but Overdrive fixed that.

Who knows how it ended up with a 1GB filename in the ROM from the factory, or if it was just something flaky with the BIOS version, but all good now...

Spent many hours troubleshooting drivers when that wasn't the problem 🤣