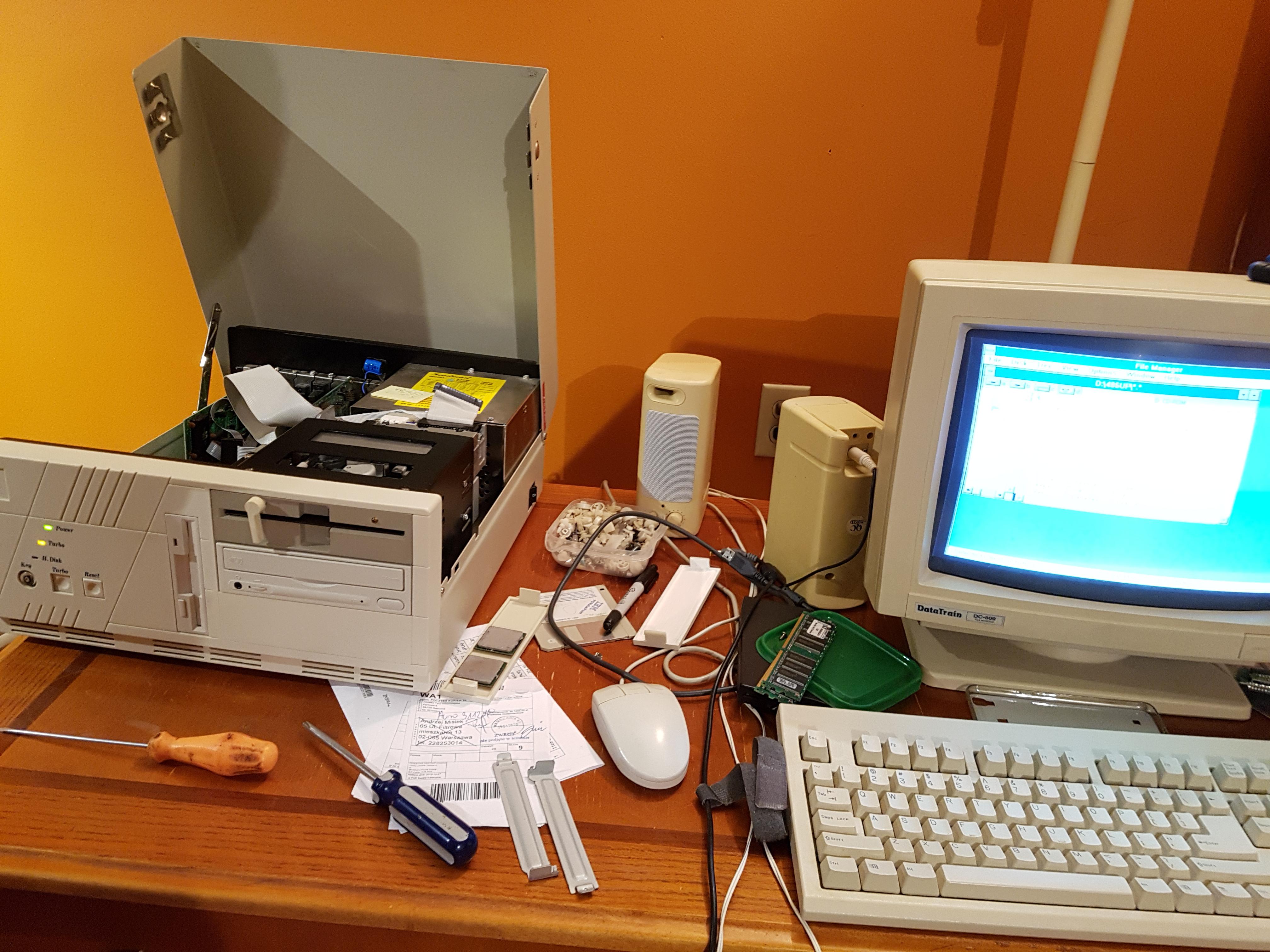 I salute you and your hinged desktop case. Would so love to have another one, used to have a couple back in the day

I salute you and your hinged desktop case. Would so love to have another one, used to have a couple back in the day

This is a German import. There are no less than 50 screws on it, and I think if I were to throw it from the 16th floor balcony, it would survive. And perhaps take a life/cause pavement damage.

Busy, busy day. First time to myself for a few weeks, determined to use it to the full and did so.

First up finishing a few builds:

2) my UMC build. Was having a lot of I/O problems with it, couldn't get the (UMC) NIC to work and worse, didn't have a clear purpose what to do with it once it was ready. Then I realized that an U5S-33 is pretty close to ideal for an Ultima 7 build, so merged that idea with this one.
- TK 8498F So3 VLB motherboard
- U5S-SUPER33 CPU
- 16MB RAM (to be upgraded to 32MB or better 40MB once I find enough FP so I can run U7 from RAMdrive)
- TK 85C418F VLB VGA+multi-I/O card. Very touchy about which slot it sits in and needs TLC and squeezing at times to make the FDC work - but very UMC in everything.
- UM9008F-based NE2000-compatible NIC
- ESS688-based sound card - with UMC chip for CD-ROM (unused...). Managed to find the mythical ENMPU.EXE MPU401 enabler "TSR" for ESS688. It runs, it claims to have MPU on the right port and IRQ (then disappears from memory, so not very TSR). And it utterly fails to output anything over the MIDI/joystick port :'( - so...
- MusicQuest MIDI card. No UMC, bit of a combo-breaker. But at least no-worries MIDI.
Took a bit of messing around to get turbo and LEDs to work correctly, but running now. Only issue is that de-turbo-ing doesn't slow this system down that much, only about 66% reduction, which might not make it suitable for really old stuff.

3) decided that my stupid 5-sound card attempt was pointless, so started to re-distribute the prize specimens over other systems. Then realized that having a P200MMX for myself for retro gaming and a K6-2 350 for my son, both running native DOS, didn't add much either, particularly as there isn't enough room to play on two separate systems at the same time anyway. So now starting to merge my game system with his and adding the GUS classic and AWE64 Gold to the mix. Hope to get that all running later this evening.

Last weekend was extremely busy clearing the flat since I might be moving soon - but this weekend I had a chance to catch up on some of my projects.

I've got a whole bunch of Toshiba floppy drives, around half of which had bad drive belts. I bought some cheap TPU filament and printed some 65mm, 0.5mm thick, 0.8/1.4mm tall belts to replace them. All the belts are replaced and only one of the drives is bad! (heads)

Initially I was trying to get hold of *a* slimline toshiba floppy drive for my Toshiba Portege 3010CT , then ended up with 5 of them because of a job lot. It spirralled from there. I've found that the later belt driven drives are actually comparatively easy to repair - the drive's tray mechanism lifts out for easy belt replacement.

Here are my thoughts on each drive:

Reinstalled Windows 95 on my Dell XPi CD P150ST because it started refusing to boot from the 1.6GB hard drive, now it has a 4GB CF card, so much faster 😀

Oh I have a very similar case !!

Mine is missing the 3.5" bay, I wonder how it's supposed to be mounted, can you shoot a photo of it please ?

I'm recreating my Windows 98 virtual machine (again)... decided to go with a few changes this time. I have to accept that there will be no Direct3D support on VMware for Win 9x and I don't want to upgrade the VM to the stupid Win XP or higher. Windows 2000 is my limit and I already have a very good Windows 2000 VM. Let's see if I can make it a productive VM.

Oh I have a very similar case !!

Mine is missing the 3.5" bay, I wonder how it's supposed to be mounted, can you shoot a photo of it please ?

The computer is already in a box and on its way to a Youtuber for review, however, I believe this is the correct bay cover, as it was at the top of the pile of covers I have: 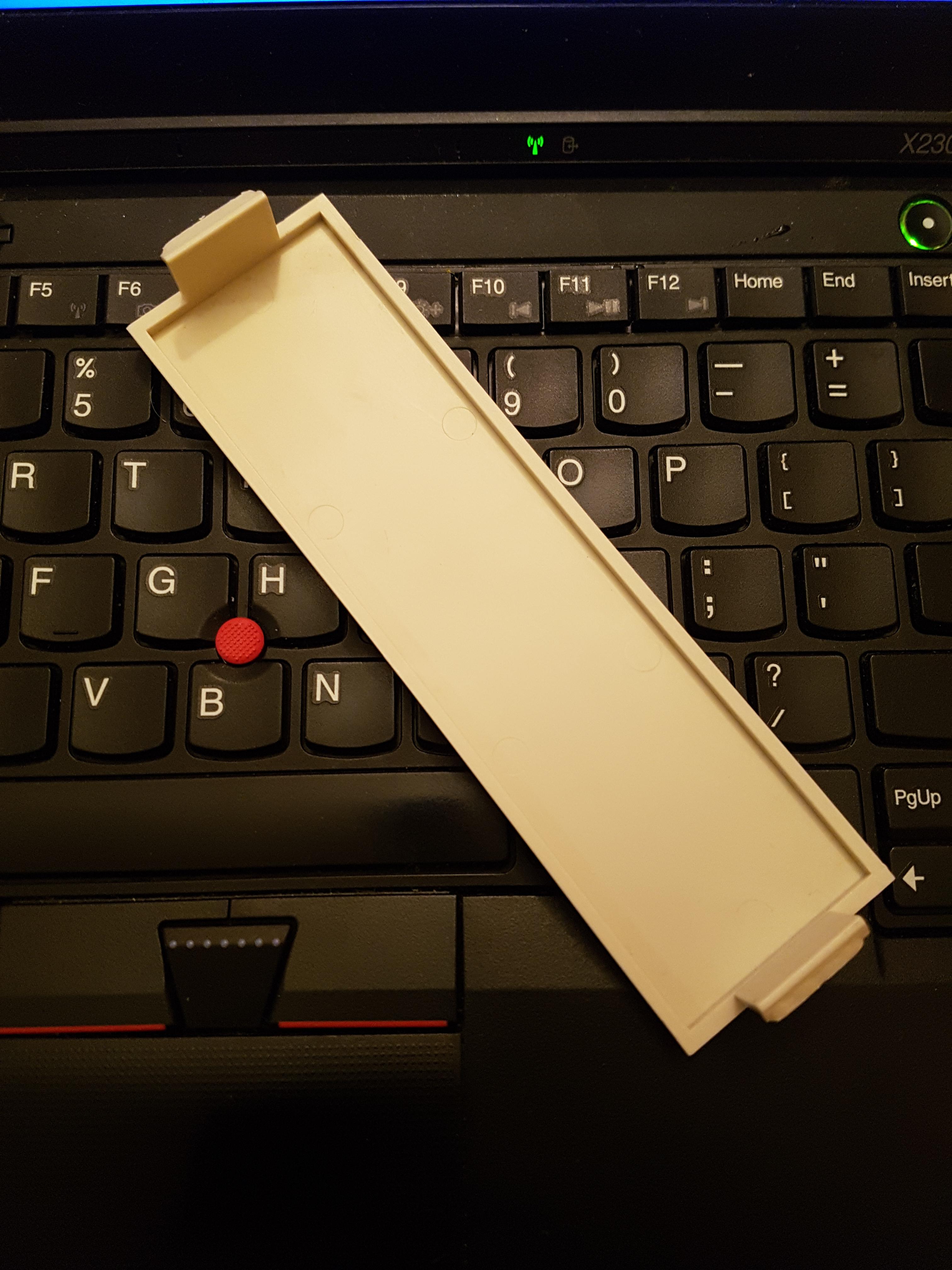 It's yours if you want it, just pay me the shipping 😉 PM me for more details.

I have been working on my Amiga500-keyboard inside PC keyboard-case modefication. I need an external keyboard for my Amiga500-Desktop case convertion. I had not come further, than to remove material, in order to have to keyboard it self, fitting inside. So I started the process, of making it ready to be able to screw/mount in the bottom part. And for that, I needed to build standoff's that holds the keyboard up, so it wont slide down towards the user. So I build 4 standoff's/brackets or what that is called, by gluing in small plastic plates. Sequring them with plastick pieces and filling out the the space behind, using the old baking powder and super glue trick. It is an old model hobbyist trick, and mixing those two, building up in layers, will result in a rock hard "cement".

Off work today, so have taken the opportunity to start recapping a motherboard I've been meaning to do for a good while now. Board in question is a Abit BX133-Raid which i want to use for my 1400-S Tualatin. 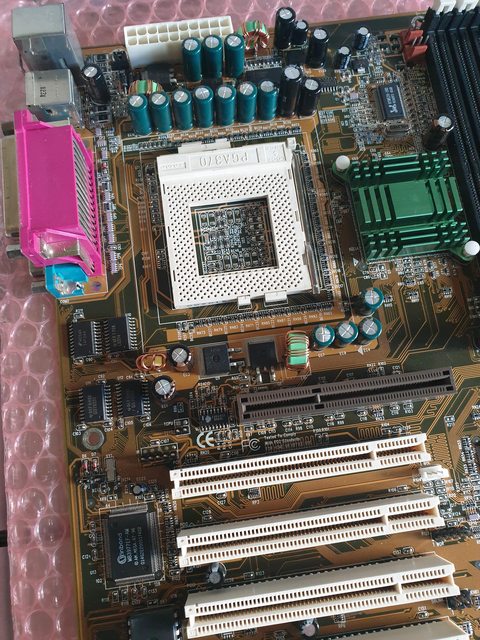 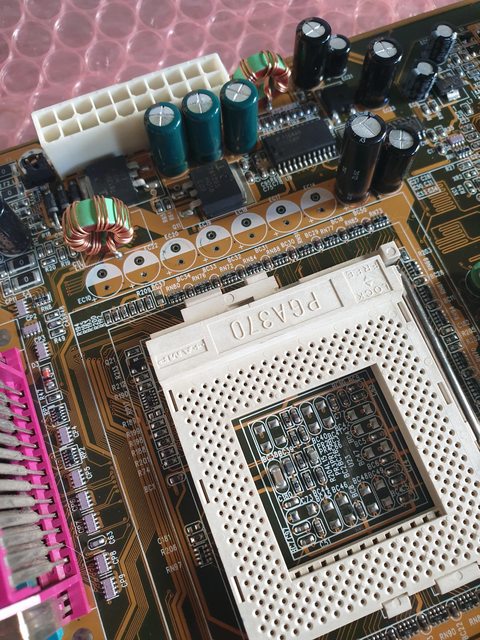 30 mins later - New Panasonic Caps in. I need to do the top 3 which i will do this afternoon so the whole power phase is nice and refreshed! Will do the rest of the caps when time permits and i have the correct caps. 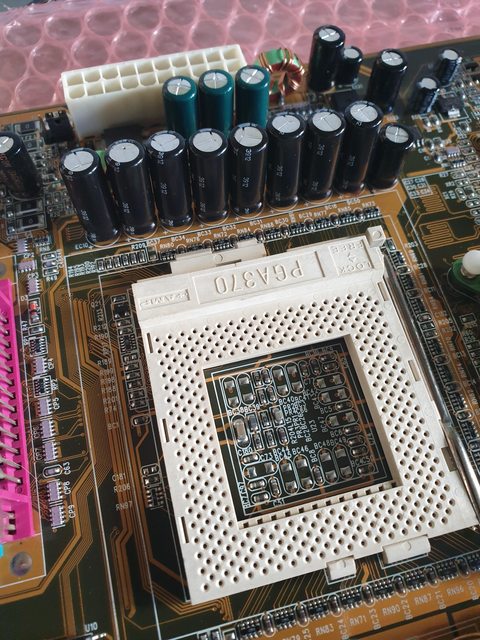 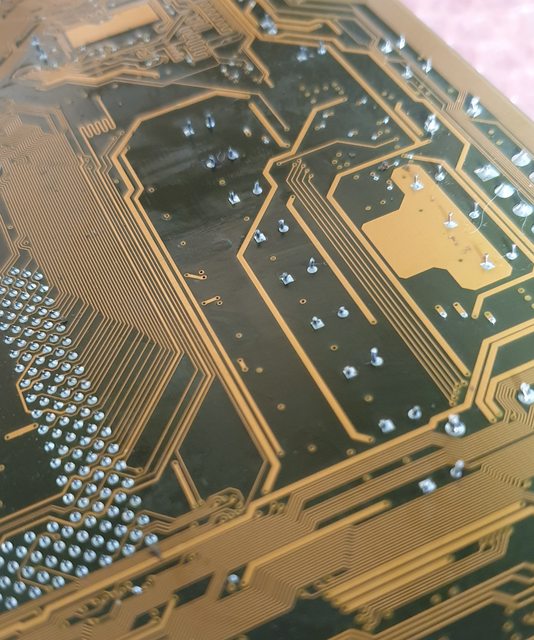 Quite happy with the result and should mean the board will continue to operate long into the future!

Loving that hinged case. Really wanted that when I took the case off my Powermac 4400/200 to press the PRAM button to get it working again!

Also started up my main retro PC f or the first time in ages, but there's no video 🙁. Maybe a card has come loose, as I've tried a different KVM cable.

I revel in small victories. Just had Madden 97 delivered for some dos football nonsense but one of the cd's was scratched to the point
it wouldn't complete the install. Bummer, so headed to all knowing google for a cheap fix and the "toothpaste" solution came up.

Never tried this before, and it worked!!! Was able to rip the cd for an image and burn it back on a fresh one. Some observations:

Use paste, not gel toothpaste
Used a old clean t-shirt with a "dab" of paste, don't coat the sucker just a thin film is fine.
Rub it in lightly from inner part to outer, stay away from center ring.
Let dry 5 min. then rinse with water, pat dry with same t shirt. Air dry completely then try it.

Maybe I got lucky but as "hannibal smith" likes to say "I love it when a plan works"!

Paste tip - if your cloth is too soft to press the abrasive in, use paper. A bit of plain card stock, like they use for toilet rolls, is about right for permeability, while keeping form while damp.

For something general-purpose and a little quicker, I've been using this bottle of Novus since at least the 90s. It doesn't list the indgrediants - it hasn't ever crazed any plastic I've used it on. It feels very like the pumice + lanolin hand-cleaners I used to use.

-- This is much more fussy than you need to be, BTW. Just rinse, shake, and wipe off the droplets like any piece of plastic. BUT, when you're unsure, being methodically careful like you're doing is a good idea. Just next time you've got a game you don't like, try ruining it, to get a feel for the limits.

I recently re-did 3 p4 mainboards - one capacitor (the same one on each of the boards) was super hard to take out. Took me more than an hour, the solder would not flow. I must have cut through the layers with vigorous iron handling as when I powered on the third mainboard, it exploded. It took the power supply with it as well. 🙁

Currently I am looking for two P4 boards...

If the solder just doesn't flow, it might be that the capacitors leg is attached to a really big ground plane in the motherboard that sucks up all the heat. You might need a bigger iron! Adding flux might also help.

I really need to test it out. I have a scratched copy of Babba Pappa, that my daughter would want to watch again.
Although she is 11, this is her nostalgic thing, that would fitt right into "What retro activity did you do today"....

Ohhh yeah... A-Team. There is this version as well. I grew up on one single Danish channel, and then N3, ZDF and ARD.
(To me, the English version just does not seem right)

Yeah didn't think of using anything like that, but yeah might good to experiment. It was just nice for something
"quick and dirty" to pan out for a change.

Yeah one of my all time favorites, but never figured out tho with all the bullets flying how nobody ever got hit?

No, I was talking of the bay inside the computer holding the 3.5" drives ^^
My case is missing that which means I can't mount any 3.5" disk drive or hard drive in there 🙁 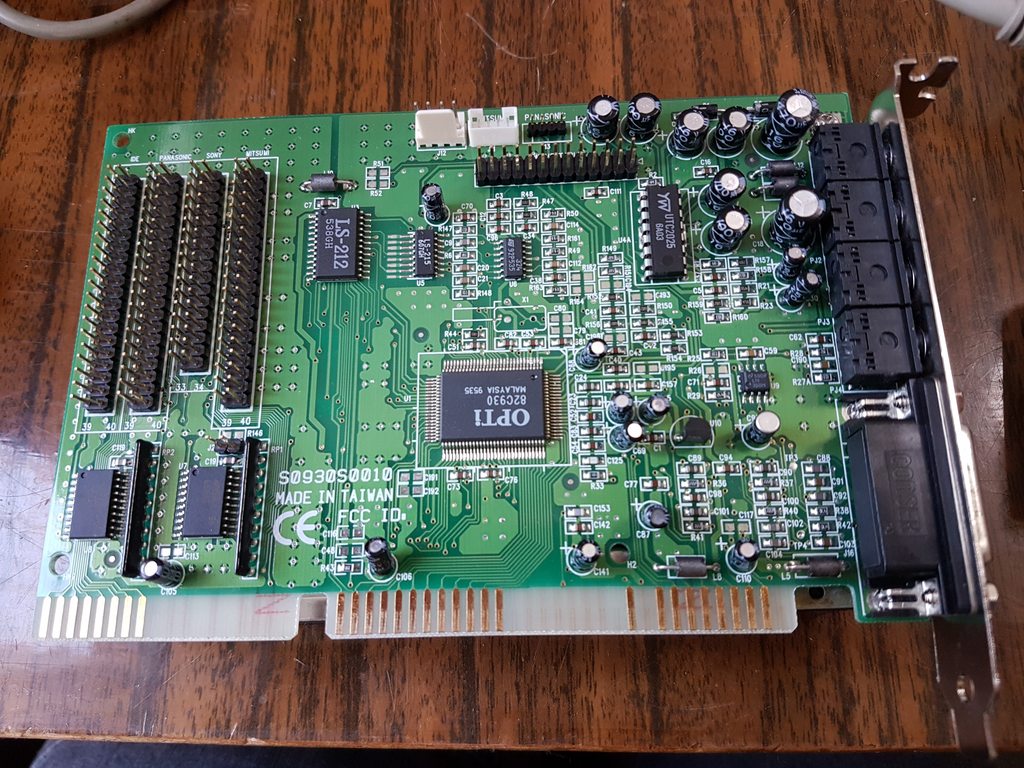 So I've been setting it up in my 486. It's a much better fit for this particular PC and I liked the multiple CD-ROM interfaces.

Sound card seems to be working great in both Windows 95 & DOS. Everything sounds great including the LS-212 OPL3 clone.

Haven't figured out how to get an IDE CD-ROM working yet though, need to work on that. oakcdrom & gscdrom can't detect a drive, whilst vide-cdd can but I'm unable to browse any disc contents.