This also proves the only thing potentially stopping me from putting a DX4 in this board is the BIOS, as the chipset and the board itself support 3.3V chips.

Worked on my main daily system: delidded the 3770k and applied "liquid metal". For a moment I thought a Terminator would rise up from the perfect needlepin-sized sphere of quasi mercury that the syringe put on the die.

In all, I'm happy I did not kill the cpu, and as a bonus, the system runs a lot cooler and more stable at 4,5. So it keeps me from upgrading for another couple of years, especially now the wife has confiscated my 4K monitor for working at home.

Today I brought back to life my Pentium retro PC, since yesterday I broke it: Help needed, broken Socket 7 board BIOS

Well, my SLI cable came in today so i finally got that hooked up. Just out of curiosity, does it matter what direction i attach the cable?

Did some benchmarks and am actually getting a bit less then the rest. EX: 140fps in GLQuake compaired to the 170-something Phil got in his P2 450 video. Im using a P3 500. 384Mb of ram and a SB32. Quake 3 sough no benefits what so ever intrestingly. Or atleast very little other than going up a res without impacting FPS

Not sure if thats just an affect of having 8mb cards, or the ISA SB is hogging up cpu. But my results are still about double what i was getting on a single card so, yay 😀

Next up is to chuck a 800mhz in there and maybe a Audigey 2.

Also grabbed ahold of a REAALLY nice complete P1 150mhz system, with a AT case! It has a mhz-display too! For $82 shipped. Ahhh, im so excited!
Iv never had a proper AT case before! Dunno if im gonna keep it a P1 or shove a 5x86 in there tho.
Im trying to restrict my retro computers to just 2. One for the mid-to-late stuff (P3 build) and another for fast Win3.1/everything earlier.

I'l post some pictures of it when it arrives 😀

I love old computers but I positively hate ancient BIOS.

Today de-soldered the dead RTC datecode 91 from my 386SX SFF PC, had huge problems with the GND pins as usual, eventually managed to get the holes clear and stick in a socket. Added the new RTC datecode 19 and it works.

Can't for the life of me figure out how to get into BIOS. I'm used to having to use a stuck key, but this one reports keyboard error but doesn't interrupt boot. Instead I have to physically mess up some hardware (disconnect HDD or similar) and wait for the monumental multi-minute timeout before getting the "Press F2 for Setup" prompt. Why do I need to go into BIOS setup so much? Because it's incredibly picky about HDDs. Normally I'd expect anything under 1024 sectors to work fine on a post-XT system with a recent DOS, but this system is refusing anything larger than the very noisy 214MB ST3243A it originally came with 🙁

Still, getting this far with a 29-year old system is progress in any event.

No AGP/PCI divider on this board, so the AGP-bus runs *probably* out of spec. How dangerous is this for a Geforce 2 TI or Voodoo 5?

Hmm is it a Phoenix bios ? Have had some old Phoenix that were quirky that way, one required F2 (on 486 ?? yeah odd). Seems the old AMI/Awards always allowed DEL to get in no matter what.

Have some old small drives I want to fix or recycle. Today worked on a 120Mb Conner CP30104, was getting detected but BIOS quickly gave "HD error" and I could hear the HD doing a restart/calibrate every 5-10 seconds. After doing some minor resolder on a couple of the SMT's that appeared to have minor corrosion it booted ! DOS 5 and Geoworks 1.2.
I am horrible at doing any smt work (lack of good gear, bad eyes, bad hands) and amazed it now works. Still some mild corrosion on a bit of the Adaptec interface chip, that was not thee bad one, was the Moto SC80566 microcontroller...

Curious to see if anyone has tried repairing old harddrives I found this:
https://youtu.be/-UJ0YE1a1Fs

Hmm is it a Phoenix bios ? Have had some old Phoenix that were quirky that way, one required F2 (on 486 ?? yeah odd). Seems the old AMI/Awards always allowed DEL to get in no matter what.

Tbh I've given up for now. The HDD it came with works fine, with some truly awful early 1990s arcade games on it. The only half decent one was a Nemesis clone - almost exacty same graphics and power-ups, just vertically scrolling instead of horizontally. Had to stop playing that as the PC speaker was keeping the children awake one floor and three doors away 🅾️

No luck with the riser, so unless I make a parallel port sound thingy, PC speaker will be as good as it gets. Have decided to do one more HDD-related thing that will be useful for other systems too. Almost all IDE-to-CF adapters either have female connectors and are vertical, sticking straight out from wherever the IDE port is, or are male and horizontal (port sticks out of side of PCB). Great for normal form factor newer machines with I/O on motherboard, but a pain in the rear end on systems with I/O on cards and completely useless in SFF systems like this. So I've ordered a couple of the vertical male ones and some 2x20p female headers. Once they get here, I'm going to transition the adapters from male to female. Should be simple enough, desolder the exisiting 40p, resolder the new headers on.

Been toying around with this thing : 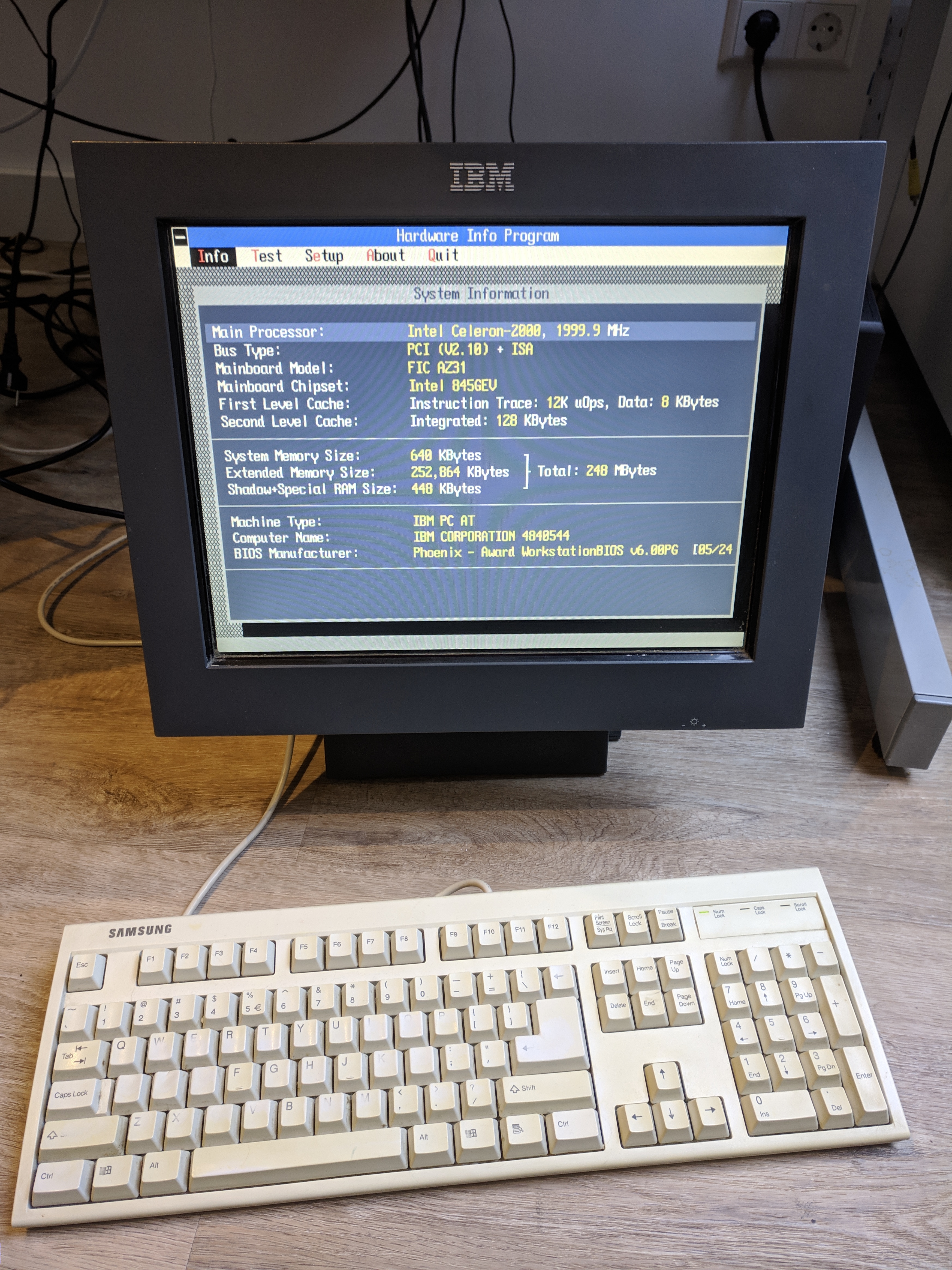 A old IBM POS all in one machine.

Its the first time i have been really playing with this as i could not originally get it to boot from USB, with the USB Stick i currently own (Integral Fusion 128GB Type-C Metal version) and Easy2Boot i was able to get it to boot MS-DOS just fine.

I also managed to get Windows 98 installed on it (Didn't take a picture before i screwed the install up), using the U98SP3 usb drivers i was able to get all the USB controllers working fine. Then i proceeded by installing the latest Intel 845 chipset driver from Phil's website and that then setup all the chipset drivers and USB controllers with the official drivers while maintaining the USB Stick compatibility from the U98SP3 USB driver set (Microsoft driver option).

The part this went horribly wrong was the GPU, i do not know why this happens but once the 845's built in graphics are installed the entire screen corrupts in states that make me wonder if it could cause permanent damage to the LCD if left on to long. I had more success with the Sci-tech Driver but unfortunately without any kind of 3D Acceleration making it very weak for gaming.

Perhaps people familair with intel extreme graphics for a 845 know how to deal with this, i also have not yet got the audio to work neither have i got the ethernet controller to work.

I am currently attempting to reinstall it to Windows XP as it originally came with Windows XP Embedded for POS, with that installed i expect to be able to find out some more details such as what Ethernet adapter is inside this system or if a soundchip is even present.

That is a nice shell. How did you make it? 3D print?

No, you can get them on ebay for just 6 bucks!

No, you can get them on ebay for just 6 bucks!

You probably already tried the other Phoenix bios enter keys: Ctrl+S, Ctrl-Alt-S, Ctrl-Alt-Esc and rare but Ctrl-Esc.
Ahh going to make an extended "L" connector. Should be easy but challenging ;p
Finding the proper riser will be tough. Did you ever find a manual ?

I have a "once was good" WD 4.3Gb ide with the click of death. There are some firmware fixes for some models but can't find this one wd 24300 yet..