For the first time in many years, I saw and played on a local arcade cabinet in a local shop.

1-2 years ago I made my own cabinet with high-end Japanese controls. Only now, do I finally have the real-world context to realise how good I've got it at home.

Amazing work getting that GAL attached to a completely different shaped socket! I would be terrified of that thing getting bumped and shorting out though. Are you planning to get a properly fitting chip? Or is it less scary in person? 😀

The cards utilized are the VooDoo3 3000 PCI and ES1868 ISA sound card (the Sound Blaster 16 CT2230 doesn't seat all the way and too long of a card since the RAM slots are right next to the ISA slots, but it's not an issue since I have other cards that'll fit in there anyway.

It lives, but it needs a new Dallas RTC, but it does work without issues.

Thank you, liqmat for everything.

Flashed the GAL and made this unholy mess to fit it on the card, it works!

Amazing work getting that GAL attached to a completely different shaped socket! I would be terrified of that thing getting bumped and shorting out though. Are you planning to get a properly fitting chip? Or is it less scary in person? 😀

I might get a proper PAL16v8, they're only a couple of pounds on ebay. But as an evening project with just what's available at home, I'm pretty happy with it and could continue to use it. It's installed in the PC and should work indefinitely.
This is one of those projects where I think it'll "take just 20 minutes" and the reality is 3 hours and one pin broken off of that unfortunate GAL, with a wire just about hanging on to the stub. 😁

I have one of those PLCC > DIP adapters too - so I could have tested on card with that adapter, but I didn't like the idea of perma-using my only one since it's for the TL866 programmer.

I imagine some people here know more about MIDI then I do.

I'm planning on getting a MIDI device eventually, for connecting a MIDI keyboard up to my old computer, but does it matter which one I get, or will any of them work for that?

The other day I received the Tualatin soler-on adapters from "the Korean guy" on eBay.
I already soldered one of them to a Tualatin Celeron 1400/100 and I have to say, you better have a steady hand, a proper soldering iron and good visual acuity if you intend to do this mod. For me, it all went relatively well, but I noticed that I have to apply more pressure to the PCB on all four sides to avoid any gaps between the CPU and the PCB.
But the mod works really well, so one of my BX systems is now happily running the Tualaron at 1400 MHz 😄
Next up: Modding a SL5XL aka "The King" to build a 133 MHz FSB 440BX-Tualatin machine!

Did the first checkup of the P/75's BakingSoda/Superglue repairs, seems to be holding up really well. Added a foam pad to the power board to make sure it stays down as I belive part of the mouse circuit is on there and that was what was making the trackball cut-out. I also added back missing hardware from the M/75 parts box.

The second M/75 shipped and is on it's way, should be here by the weekend. I also have a bid on an Ultralite and eyes on another one just in case that one does not work out. The plan is to have one of each version in my video, and show benchmarks and whatnot on them. I'm also still editing the 4 1/2 hour long footage of me doing the baking soda/superglue repairs on the P/75....that one will be awhile.

In the last few days I did some tests with an ASRock P4VT8 +, some time ago I changed the electrolytic capacitors, and the repair was successful.
Now I have put on a 2.8GHz / FSB800 P4 Prescott CPU, and have tested 2 PoV video cards one FX5500 and one 6800GT.

Last weekend I backed up and reinstalled Windows 98 on my Pentium 4 PC, to solve this issue. To nobody's surprise, the issue got solved (damn Windows ME).

I imagine some people here know more about MIDI then I do.

I'm planning on getting a MIDI device eventually, for connecting a MIDI keyboard up to my old computer, but does it matter which one I get, or will any of them work for that?

Might be getting a a Thinkpad 240X - thinking of messing with spdtool to reprogram a SODIMM module to report less memory than usual.

Also, some stuff arrived in Japan for me. Looks like something to drive a train from 2003, and an old Japanese Thinkpad. Fun...

Also tested a USB-PD adapter for the old-school yellow-plug ThinkPads - ran at 20v instead of 16 so not something to use often, but works in a pinch.

Cool! Someone did something similar here on VOGONS before, yours apparently is to be connected from the rear view, the one I saw before was for the front view, I can't recall who and where.

Used CTCHIP to try to sqeeze out every last bit of my 386DX40 with a M321 motherboard by going through every bit in chipset registries together with datasheet. Unfortunately, there's nothing i can tune up more. Only thing left to try is to maybe put some kind of 85-90MHz crystal in place of 80MHz one. Maybe i get out something from that...

Current results are same as here: Re: Post your 386 Speedsys results here
(Though, i now use MR BIOS, so i need no XT-IDE extension any more)

I also compared this board with MS-3131 board. Unfortunately, i couldn't get it running faster than M321. It was eventually super close (Also used CTCHIP, found MR BIOS for it, etc), but still a bit worse.

Yes!!! This is the project I was talking about, thanks!

I built a 433 MHz Celeron from spare parts I had - It's actually a pretty decent system for DOS games, played Dune 2 on it, then some Settlers 2 gold.

*edit I also ordered an XTIDE EEPROM chip for my 386 so that it can hopefully see the CF card properly.

I also worked on my 1st gen i7 - got everything sorted out, added a 1TB drive and configured it for my dad to use.

Here's some pics of that build: 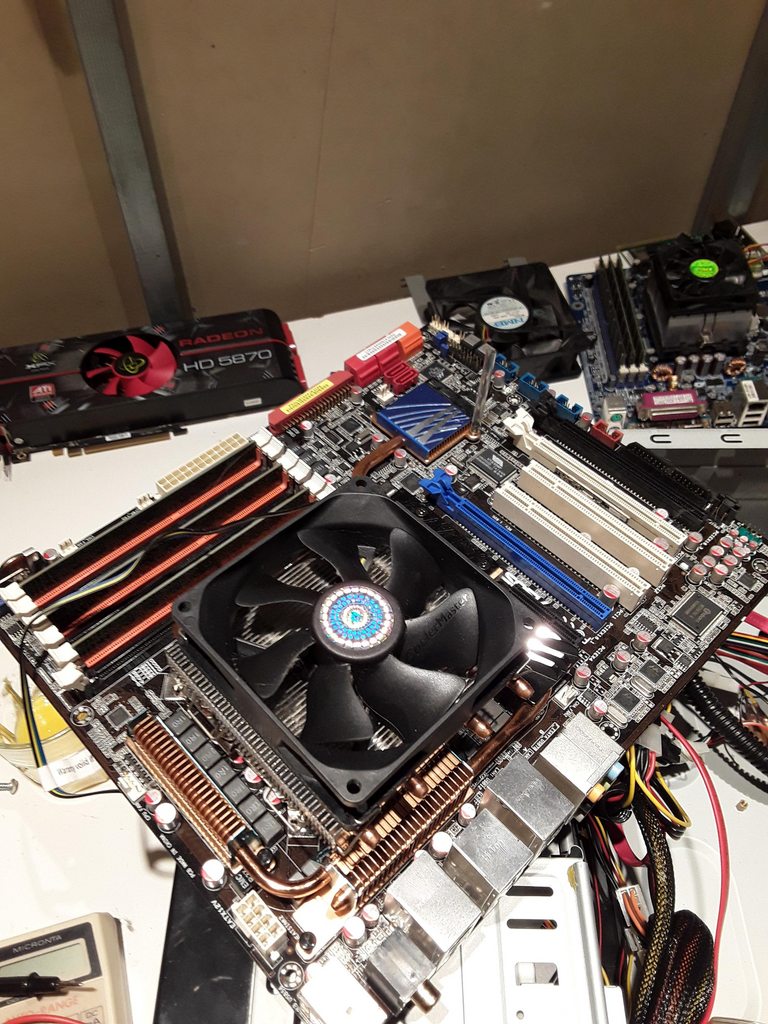 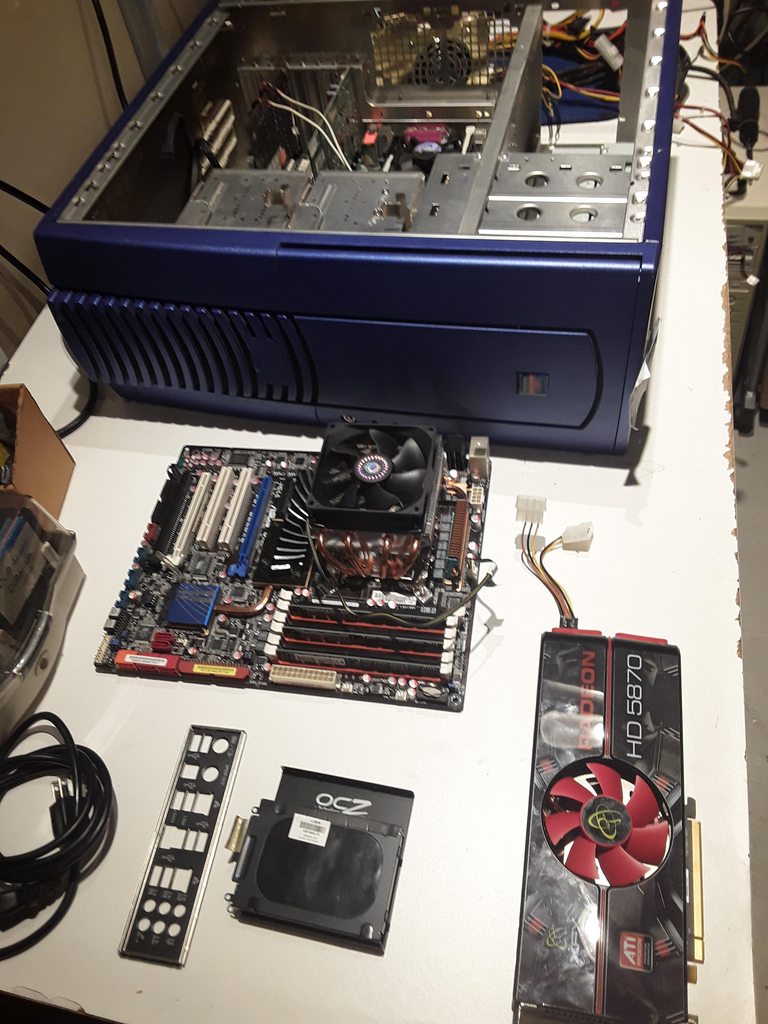 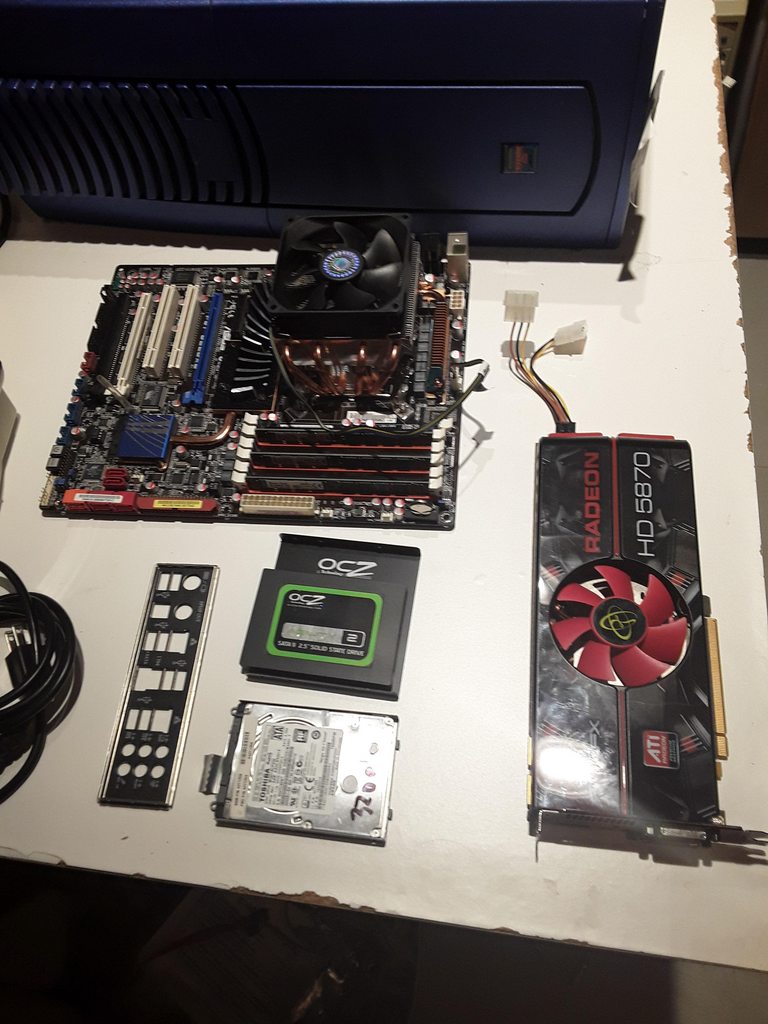 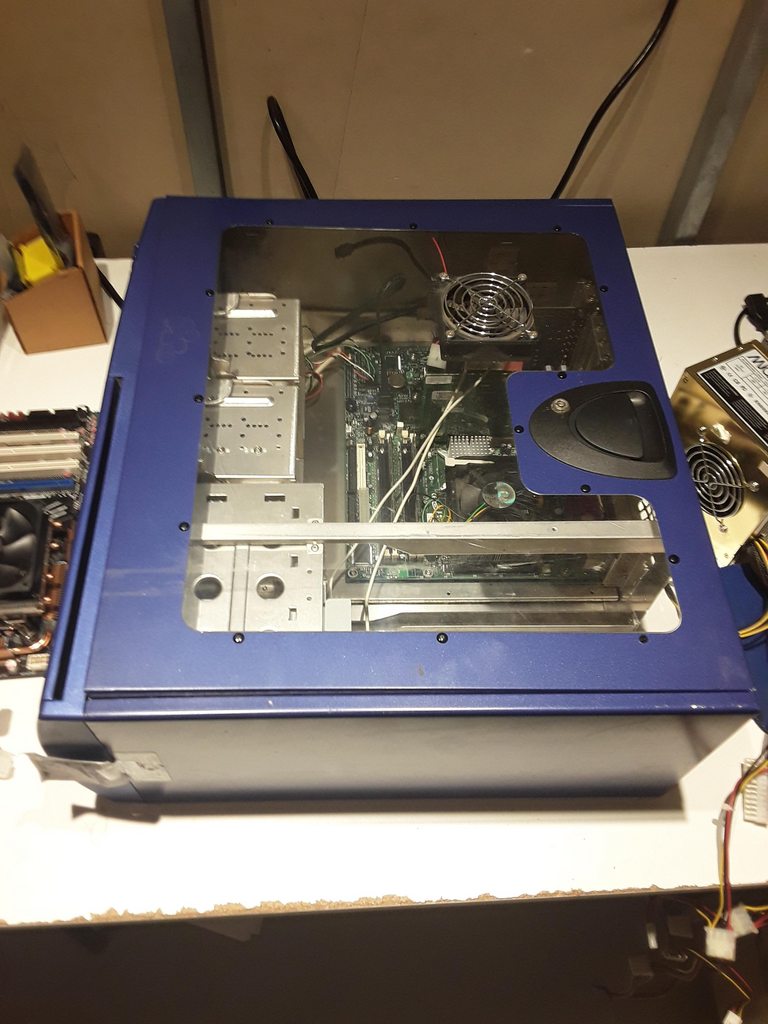 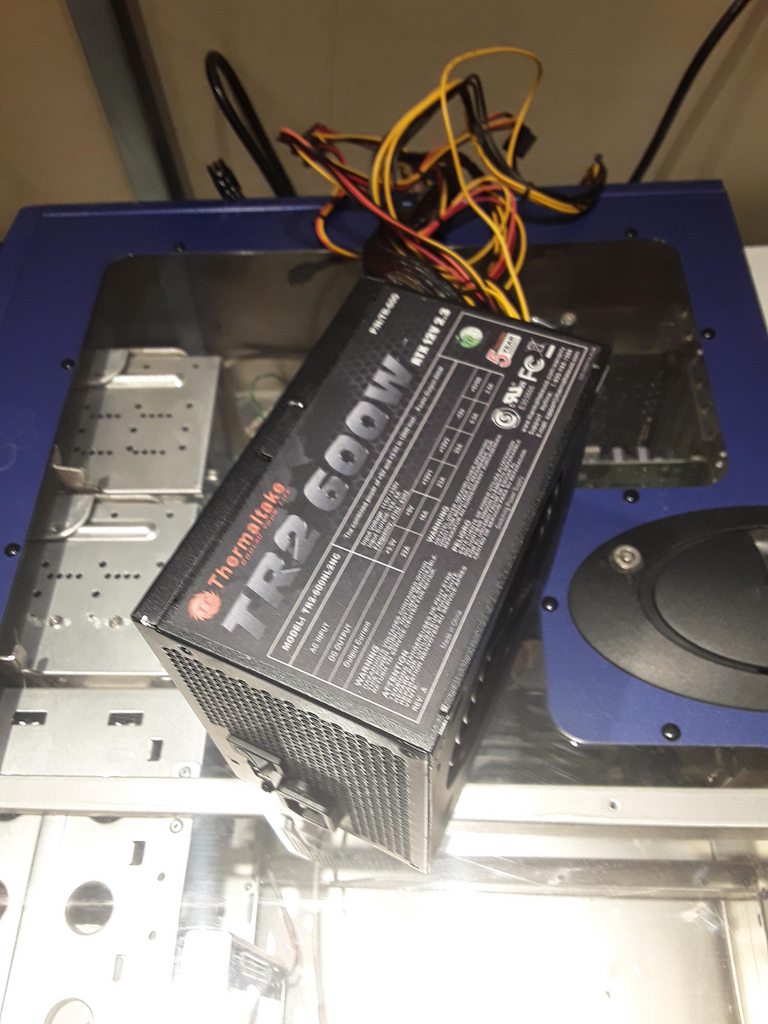 It's the best of what I had lying around, power supply wise.

Also, while redoing my office (retro corner coming soon!!) I found some AT case keys, so I rewired this to work with a key: 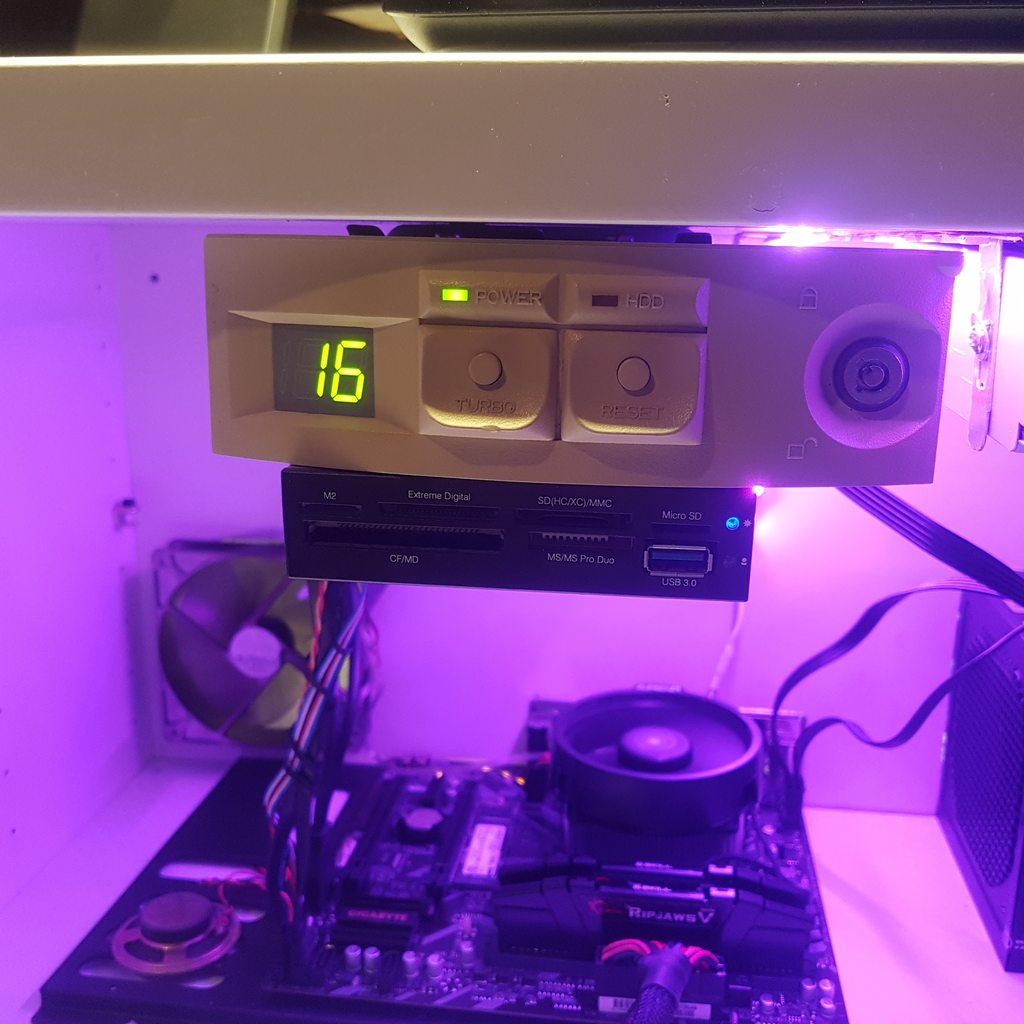 Now the next project is to run CAT6 and make drops and connect everything together. Currently all wifi, with the router 5 ft away from me. Bombardment!

Got a copy of Myth II Soulblighter the other day. I used to play this back in the late 90's. I loved how well the dark/horror atmosphere was done for this game. Take this intro the the second level, the writing and the superb voice over gives it real haunting feeling.

Now I have to build the machine to play this on... 😄

Recently I "upgraded" to Windows 10, as Ryzen chipsets no longer support anything else.

This is when I realized that playing Red Alert 2 on it was out of the question - after finally getting the crappy Origin version to run (disc version refuses to run the installer), the performance was just terrible (even with the videobackbuffer fix). With TS-DDraw (which is supposed to resolve everything) the game refuses to even start up.

Ran stuff like the OG version of HL2, NFS:U, Doom3, BF1942 and other games at crazy fast FPS with really nice visual quality. Looked even better on a CRT monitor.

I'm quite amazed that this thing managed to be even less compatible with RA2 than my new Windows 10 PC, despite all other Windows OSs - 98, xp and even 7 running it perfectly fine.

So I'm at loss here. Guess I should try an nvidia card? The reason I used x1900 is because it's really fast, supposed to be compatible with games from this era and it has really nice visual quality. The only PCIe nvidia cards that I have are 8800 series or newer, which might bring other compatibility issues.

Depending on the hardware, and assuming that you have Windows 7 or later, Red Alert 2 works :
CnCNet/CnC-ddraw
OR
Aqrit's DDRAW

CnCNet/CnC-ddraw contains more recent code than TS-DDRAW, and is a fork of the old hifi/cnc-ddraw.
With it, you can also change between GDI and OpenGL mode, but you should not have to.
I also have to use Windows XP Pro SP2 compatibility mode on top, even if the authors of CncNet/CnC-ddraw are against it.
Otherwise, I just get an error message box (at least on the first start).