Took my mom (85) to hospital, she fell this morning. All is good no serious damage but could have been. Spent the afternoon re-working her bedroom so is more senior sensitive (with many arguments).
After that came home and fired up the old Kenwood KR-8010 (1979) https://www.hifiengine.com/manual_library/ken … d/kr-8010.shtml
fed by Denon DCM-360 (1996) https://www.hifiengine.com/manual_library/den … n/dcm-360.shtml
pushed to some Infinity SM-122 (in Brown wood) towers and played some ACDC and Van Halen to relieve the tension, a few beers did help ;p ....
Went thru my old box of cdroms to add some to this thread: What is a period correct Optical Drive?
Sorry if this in off topic but was a bad day in many ways 🙁

What kind of community would we be if we were not supporting each other. Real life issues like this intersect all our lives, and make us understand that all is relative but good health. It's a good thing we have our hobbies to wind down. I wish your mum a speedy recovery to the beats of 80's rock.

Oh man, last time I was at college, I was getting A+ training on Pentium systems (As in , Pentium 133 MHz) running Windows 98.

Of all my post-secondary studies (College, BA, Hons. BA, currently Masters), the most fun and enjoyable (academically) was in fact college. Enjoy it man!

Took my mom (85) to hospital, she fell this morning. All is good no serious damage but could have been. Spent the afternoon re-working her bedroom so is more senior sensitive (with many arguments).

Same thing happened to me last week, same preparations were made around the room.

It's tough to get old and tough to see the ones you care for get old. Get her one of those alarm bracelets and consider/plan for regular help if needed. My grandmother really shined up in her last years when she received help. Hope your mom gets well soon.

Plastic jiffy boxes are annoying to cut neat holes in. From my research, it seems the world agrees on this. That is all.

My sincere best wishes to your mom and yourself, dude.

Hooked up some ridiculous * (edit just figured out there's a W in front of the name) Wave Master 240 speakers to my retro corner: 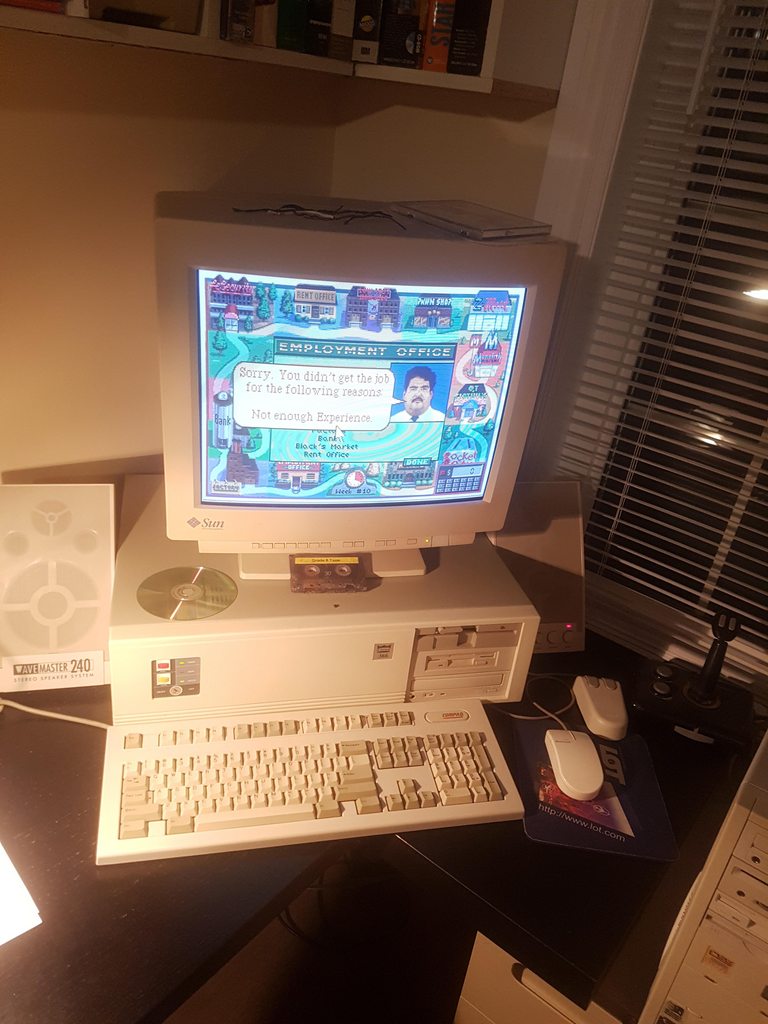 I couldn't pass these up at the thrift store for $6 - too big to ship with an eBay system, but perfect for the Retro Corner 😁 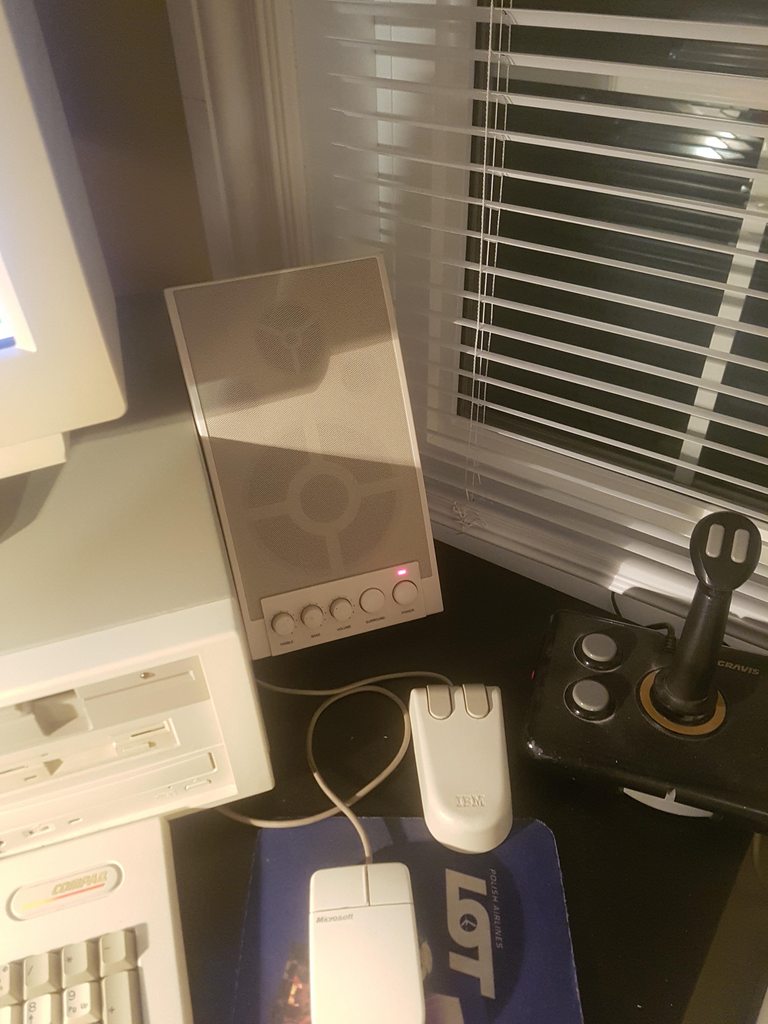 They sound great, and the power adapter for them is ridiculous - very similar to a C64 brick in size, output power, and DIN plug. I love the aesthetic.

I've done my super socket 7 CPU benchmark review with a new (to me) MVP3 motherboard. K5 vs K6 vs Intel vs Cyrix

I started upgrading couple of my 8MB Voodoo2 to 12MB. Same time wondering would 16MB upgrade be possible without ruining everything. Of course it would not make sense other than being cool. I don't even know is there drivers/glide games supporting that memory size (some Obsidans maybe?).

Interestingly PowerColor EvilKing II has DRAM pin #15 connected due to 512kb x 16 chips (single side RAM layout). Otherwise it has the same 3dfx reference layout. Though photos are good at VGAMuseum, by fast analysis I could not track where are those pins #15 connected to. Maybe I'll look this better another time.

Someone please show Putin how to play Warcraft.

I recently replaced most of the fans in my dual socket rig.

Next on my list will be either completely replacing the power supply or just replacing its fans.

I have been a Lian-Li fan since about 2006 and held on to my original PC-65 case since I bought it. On the left is my newer Lian-Li LANCOOL II Mesh RGB. I am not a huge fan of RGB so they are likely going to be replaced with more Noctua. Here is my old case vs new.

Been (very slowly) building out the 80GB drives on my machines. The v/50 is pretty much done and going, the 40EC is getting setup currently but I'm having CD-ROM issues so I might be swapping to a more modern CD-ROM soon for these old boxes.

I have an extra drive - trying to decide between a souped up Win98SE setup with WPA for WiFi to share between my P/75 and M/75, or a FreeDOS setup for the M/75 that's just a clone of what's on the P/75.

My personal life is going extra slow right now due to various other things going on so I'm not getting to tweak and tune as much as I'd like.

Building a new old stock vintage system, at no cost other than shipping, for a friend who's a member here and at VCF. He's looking forward to it.

Here is the beginnings of it on the In Win A500 pull out mobo tray:

Well, I'm leaving the HDD blank, but I think it's a great multiuse dual boot candidate of a machine. A little DOS/Win 3.1 so CPU #1 feels important and a little Win2K so CPU #2 doesn't feel lonely. I wish the brass was my idea, but those CPUs actually came from unused IBM CPU upgrade kits. The HSF was already factory installed and amazingly the thermal compound that is probably fossilized inside is doing its job in spades. I think the colorful electric wire coming from the fans is a nice splash of color, but then again I was never very caught up in vintage hardware interior decorating. 😉 Overall, I agree, I think it looks handsome for sure. Too bad it will be locked away in a case that has no windows, but I love me some In Win A500. One of my favorite vintage beige cases. If it only had a LED readout it would be a killer.

No sir. Just your standard 30-pin. On another note, one of the cheap plastic memory clips snapped from age, but the remaining clip is holding it nicely in one of the slots. The entire memory mounting assembly is one piece so Luckybob directed me to a higher quality replacement that has metals clips. I will be shipping that with the system so the new owner can have a weekend project if they so choose.

Believe it or not they idle at around 36C. Under load they only get into the 50s. The Klamath has a max temp of 72C from what I was reading. Maybe IBM put their secret sauce sandwiched in-between the HSF and CPU. Maybe it's peanut butter. Like I said, I didn't change the paste since they are NOS and the temps look really good. If it aint broke... Which brings up another interesting fact about the Supermicro P6DBE. After applying the last and latest BIOS to the board I went into the settings only to find a wall of text in potions (I mean options). I know it's a workstation/small server board, but it has a lot to contend with in there. I left most of it at default settings. I could not understand why the front 80mm case fan was not kicking in that I had plugged into the board's thermal fan plug. Appears this board has a built-in piezo thermal alarm speaker you can enable in the BIOS and you can set the temp threshold of when it should sound the alarm. According to the manual that is when the 80mm case fan will kick in to cool the system down. So I set the threshold to 33C and holy mama on a torpedo. That was seriously loud and made my wife jump into the ceiling, but hey, it worked and the fan kicked in. I would say that was pretty cool, but that's just me trying to be funny.

And 86w on the 5v rail just for the CPUs, when they're under maximum load. That's up there in overclocked Athlon XP land! 😜

Hi there - which PSU are you planning to use with that?

I have a dual Pentium III 1.4ghz Tyan board that I was trying to use but it seems like two Pentium III's need a very high amount of amps on the +5v rail and I haven't been able to track down a totally working PSU with enough grunt for it.

As for me, last night I finally managed to get the single rig more or less Windows 98SE stable, got Win2k installed and mostly stable so far. Seems that DIMM 1 slot maybe isn't happy so instead of 512mb RAM (256, 128, 128) I'm only running the 128mb sticks in slots 2 and 3 for now. Had some issues with the 'newest' reference drivers for the Vortex 2 sound card but one version back works great. Currently investigating a possible graphics card issue that seems to be mostly related to low color depth but at the end of the night in Win2k I started getting some artifacting even at 32-bit and native screen resolution so it may be some kind of hardware issue/failure.

I have found with those late 90s Gateway cases the power buttons love to break and sink inside. It's the way they are angled and the plastic poles on either side of the power button gets plastic fatigue and tends to snap over time. There was a guy selling 3D printed power button replicas on Ebay for awhile and I bought a handful from him. No longer have the machine so the extra power buttons went with it. I posted about it awhile ago. Might be something to consider as a 3D print project down the road.