It's for the chips with windows.

It's for the chips with windows.

Also, I decided to finish replacing all of my 1500uf 6.3v electrolytic caps on my Asus P3B-F with polymer equivalents. This time more of a preventative measure instead of in an attempt to fix something, although I have noticed after doing this that the still non-functioning PS/2 mouse port causes less problems less often if I have a PS/2 mouse plugged in versus beforehand, which is nice. 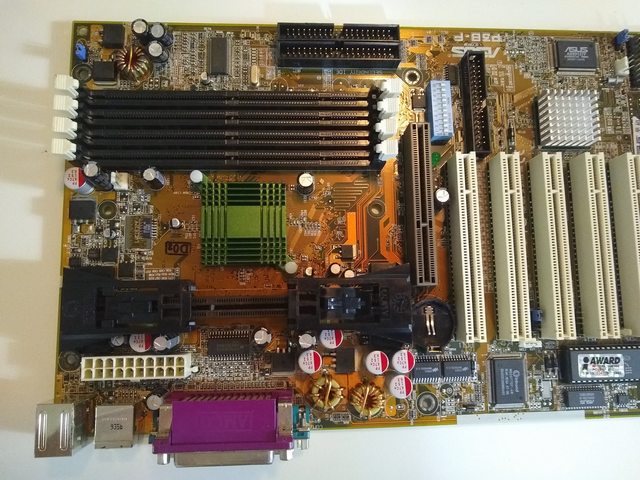 Looking at the other caps, I noticed that there are electrolytic caps with the same ratings, with the only differences between them being height. If I wanted to replace them with polymers, could I use one type of polymer for both, or would I want to find polymers of equivalent heights for each type of electrolytic I'm trying to replace?

Cleaning up some Socket 8. That middle guy looks like he got a sunburn, but we'll see in testing.

I have a motherboard with nonfunctional PS/2 keyboard port. (USB keyboard is OK.) What causes this? Can it be repaired?

I have a motherboard with nonfunctional PS/2 keyboard port. (USB keyboard is OK.) What causes this? Can it be repaired?

IDK. You can try replacing the keyboard port yourself, but whether that would solve the problem I have no clue.

I replaced the dual PS/2 connector on my board with a brand-new one, and that didn't solve the problem. However, I have noticed that the more capacitors I replace on the board, the better the situation gets with my non-functioning PS/2 mouse port (the PS/2 keyboard port works flawlessly). BIOS acts weird less. A PS/2 mouse plugged in does less to the system negatively. So on. So I theorize, if I replace every "old" cap on my motherboard with a brand-new polymer or electrolytic cap, it would either actually fix the PS/2 mouse port and make it functional, or at the very least make it so it doesn't matter what I do, the PS/2 mouse port won't work, but it won't affect the rest of the system.

Did a video shoot of my modified GameBoy Color:

The height only is an issue near teh cpu socket and the pci/agp slots. As long as nothing touches the cap, height doesn't matter. But for the ones between pci slots, make sure teh cap is shorter than the slot connector..

Typically, phyically larger capacitors have better ESR and ripple current performance for a given voltage/capacity.

You should look up the specs of the original capacitors and try to find reasonable matches for ESR as well as capacity and voltage.

The VRM capacitors around the CPU can be replaced for polymer solid capacitors if you are unable to find a suitable wet electrolytic replacement. You you switch to polymers, you would normally search for a capacitor about half the capacity of the original one but that has reasonably close ESR to the original.

Got this Abit FP-IN9 SLI board for $12 that was supposedly not posting / blank screen. Thought I would give a shot at repairing it. Turns out that the only thing wrong was the CMOS jumper was missing. I put a jumper in the "normal" position and it works fine now.. haha. Easiest 5 second repair ever. Now I can put my QX6850 and 8800 GTX SLI to good use. 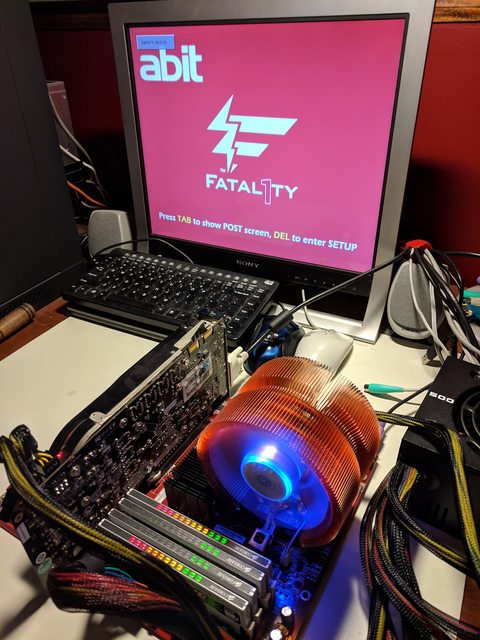 I'm in the middle of searching for a new 14" CRT monitor for my computer. Contacted a bunch of sellers and got some interesting offers, such as a Samsung Syncmaster 3 and an ADI Microscan 3G, both pretty good monitors but I'm not receiving any message from the sellers of the ones I'm most interested into: an Olivetti CDU 1458/HA23 and another CRT that seems like another ADI (but this one has fully analogue controls) or a CTX.

I didn't remember looking for a vintage CRT would be such a frustrating and time consuming job.

The height only is an issue near teh cpu socket and the pci/agp slots. As long as nothing touches the cap, height doesn't matter. But for the ones between pci slots, make sure teh cap is shorter than the slot connector..

Good to know, good to know. However, a new question arises: How in the hell am I supposed to look up some of these caps? 🤣

Digikey probably isn't the best site for looking up decades-old caps, and on most, if not all of these caps, they don't have printed on them some serial number to making looking up their specs easy. So, does any one know any good sources to find information for these old caps, or am I just going to have to search in the dark until I find by luck the data sheet on a specific cap?

This is what I do:

Months ago, the proprietary PSU in the P2-400 went bad and I didn't have the money or motivation to replace/fix it since I used the system so seldom. So finally, I got around to transferring the pair of Voodoo2's into the P3-933. I set up my older games (MotoRacer, Quake II, Unreal, Half-Life, Thief, MDK, etc) to use the V2 SLI while the newer games (Unreal 2, RtCW, Deus Ex, Undying, Jedi Knight II, etc) use the GF3. Aaaaannnd, the system still gets used rarely, but at least I can run games on the Voodoo2s again if I get an itch. As some of you know, I mostly use my retro systems to play through the best FPS and RPG games of yesteryear, and I do have a few games on this system on my To Play list, so eventually I will get a lot of use out of this system again. 😀 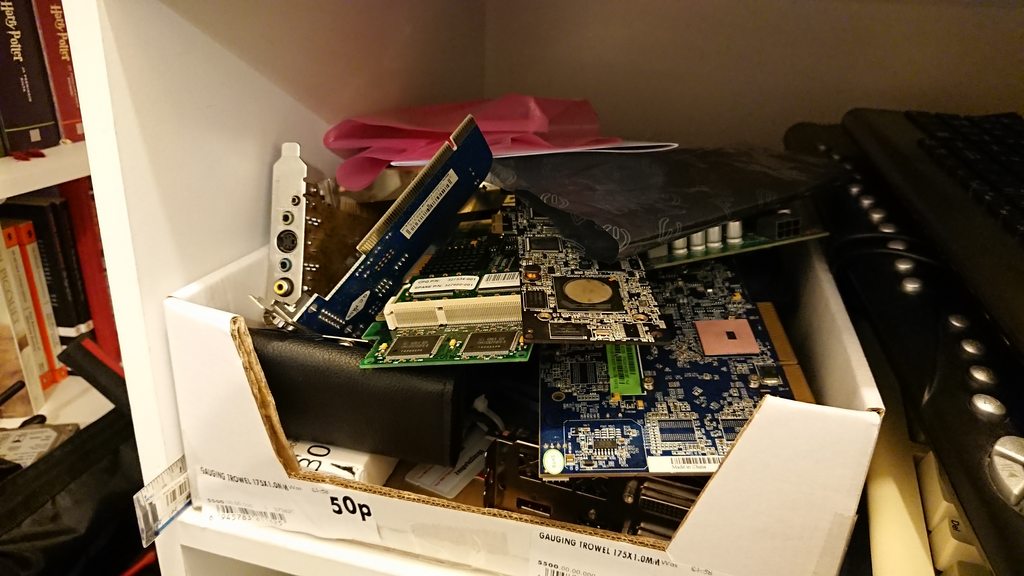 I thought I should check what I actually have these days: 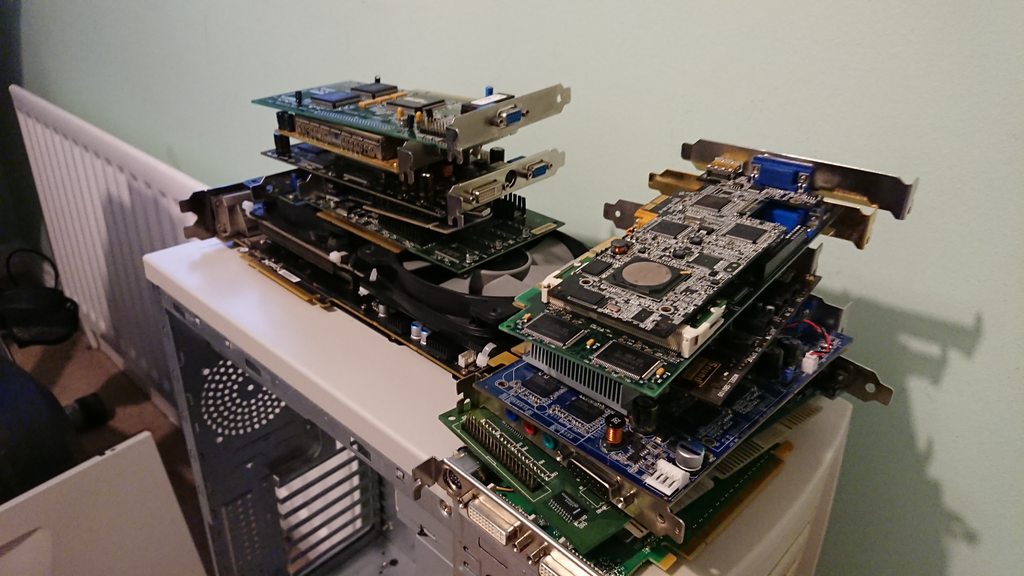 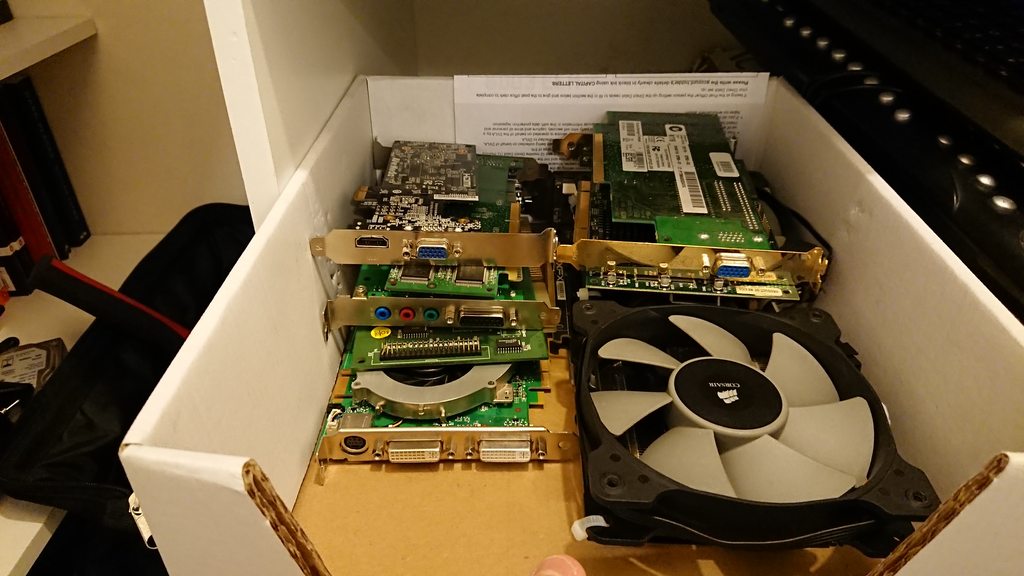 it's a bit neater now but still gotta be careful when digging a card out.

Then I tried to change my cooler on my 6600LE to a quiet one. the push pins won't come out - the type you squeeze underneath to squeeze two tabs together, but it wouldn't budge. Not even with a blood sacrafice! Enough retro hardware for today I think. 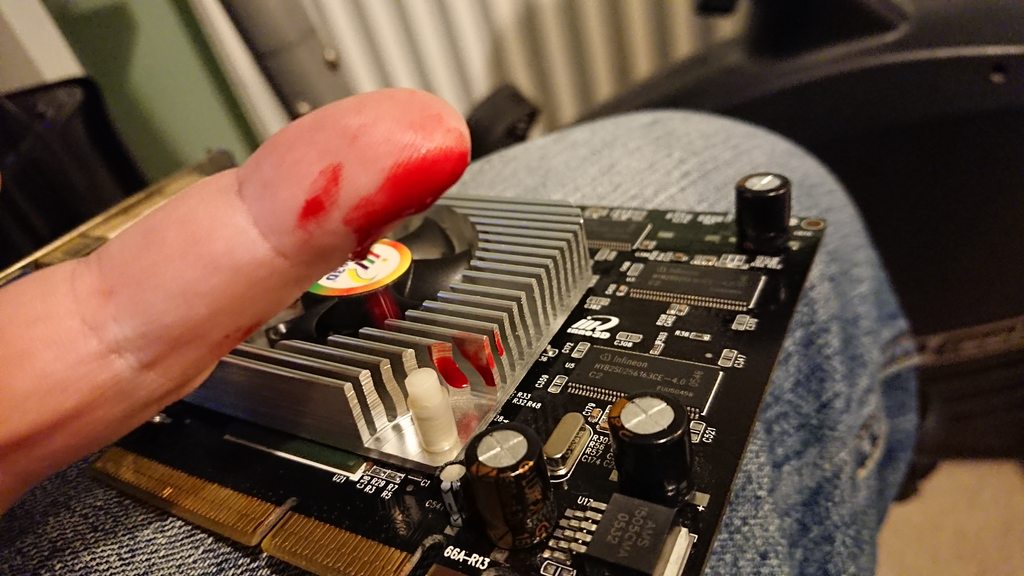 actually, that seems like a daily occurrence for me.

Installed DesqView X in 86Box. If anyone wants it, here it is. Has DOS 6.22, QEMM, Windows for Workgroups 3.11 and plenty of other goodies. https://drive.google.com/file/d/1mZ4EcdGXzDRR … iew?usp=sharing

actually, that seems like a daily occurrence for me.

Basically what I do on Digikey.

I'm guessing that since it can be almost impossible to find the right data sheets on specific capacitors, the best thing to do would be to first find the best-specced electrolytic replacement, and then try to find a polymer equivalent, and if there is no such thing, then go ahead and just use eletcrolytic, no?