Looks great. Sometimes a feel tempted to look for a C64, I have no experience with them and I don't think I even ever used one.

Thanks. I made sure that the ratings on the big caps, is facing up in case of future recap.
Might not be possible to do in the future, because you never know when these machines will die completely.

Well...
I have made sure to future proof it with the use of a modern power supply. I need to figure out how to use a 5volt VIC-II instead of the 12volt that is in it right now. This I have asked about and around, if this is possible to do with some kind of voltage converter PCB. That is because the 12volt that I have in it right now, delivers a bad contrast between light colours and white. I do have a spare 8565r2 chip, and they are supposed to be the best revisions of the 5volt chips. Else I need to source a 6569r5 chip. They are normally found in 250466 boards and by the readings of it, then those boards are the absolute best breadbin versions. Now... With the new 5volt's, I get jailbars (spaghetti lines) on every chip. That is just how they are build. And that can be removed with a lumafix. The bad part is that I loose some of the contrast and sharpness in the picture when using lumafix. So the trick is to find a perfect setting on the pot's on a lumafix, or use a high quality television with scart or use a commodore monitor with chroma and luma. The crazy part on my tv, if I am using a shortboard (Commodore64 Model C board) is that I get a super sharp picture with nearly no jailbars (super faint) when using composit, and a lesser sharp image without jailbars, when using scart.

Commodore64's are not just one type of machine. They are all build differentltý. 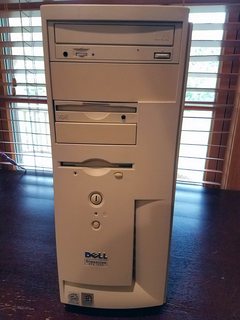 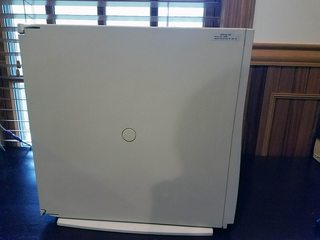 This thing had many scuffs + dust everywhere. Nothing a magic eraser, damp paper towels, and an air compressor couldn't fix! 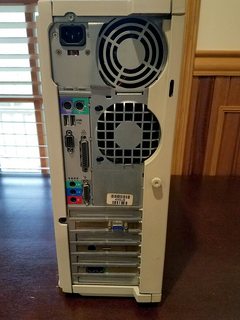 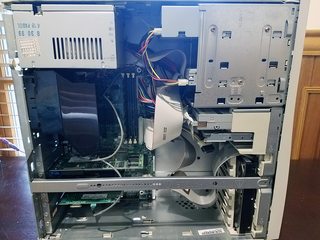 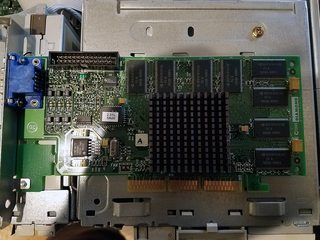 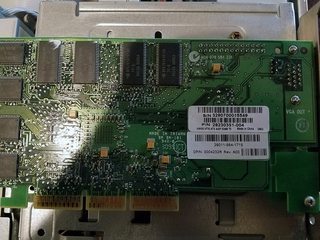 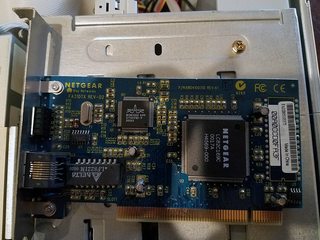 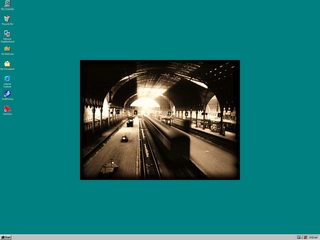 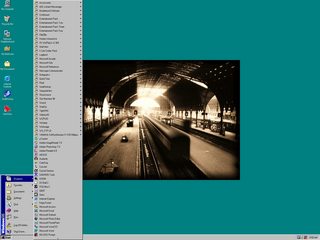 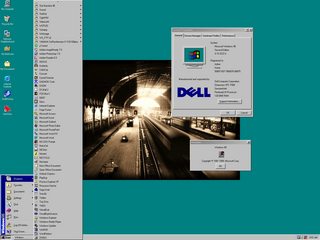 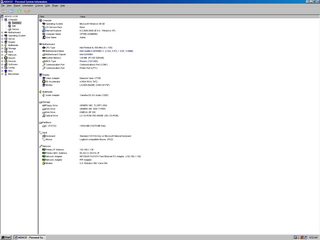 Oh I got rid of that machine a long time ago. Right now I have my laptop, desktop, an Optiplex 330 and this.

I had one of these once upon a time. It was a hand-me-down from my dad, who used it as his primary machine around 2000-ish. Some of my earliest memories of computers are when he had this Dell.

I cut my teeth with computers on the good old T500. I still have the guts of it, even the original hard drive which, amazingly, still works like a champ.

I was looking for a solution, in order to be able to use a 5 volt VIC-II chip in a 12 volt Commodore64 board. It turns out, that there are no adaptor or PCB, so I had to cook something up. Made a quick and dirty solution. No time to test, too late. I made sure that Pin-13 did not make electrical contact between the board and the top socket. Then soldered a wire between Pin-13 and Pin-40. Hopefully the solution is not too high. At least this is a prototype or what it can be called.

Still fiddling with IBM Thinkpad stuff, this time with a T20 (2647-86U) I picked up for cheap that was described as not working and did not come with a charger. Thankfully, these models are compatible with the charger for my old R52 I used in college, so that was no problem for me. Plugged it in and it started up, but was immediately blocked by a BIOS error for the date/time followed by the prompt for the BIOS supervisor password. Can't set the date/time without access to the BIOS, and can't enter the BIOS without the password, and the system would not continue booting without the date/time set (even just hitting enter without entering any password would not work). Boourns!

Was not really willing to spend more money to buy the fancy tools people use to dump the EEPROM chip that holds the password, but I google'd around a bit anyway to see what if any other methods there might be to at least skip the password prompt or something. Saw some Youtube videos about shorting pins on the ATMEL chip, but they did not exactly match the chip in my T20 (an ATMEL 24RF08CT which has almost twice as many pins as the ones these videos show, and the SCL and SDA pins are not right next to each other anyway). But, I decided to experiment anyway.

Eventually, through much trial and error, I found out that shorting the 4 bottom pins on the right-hand side (the side opposite the circular indentation on the face of the chip) approximately one second after the computer beeps just when the startup Thinkpad logo is about to disappear and the date/time error message is about to be displayed would skip the password prompt and take me directly into the BIOS. However, it put me into the BIOS without supervisor permissions so I could not change some things (such as the date and time). Confusingly, after hitting F10 to save and exit, the laptop restarted and still gave the same date/time error with the supervisor password prompt showing up, BUT this time simply hitting enter at the password prompt allowed me to proceed through, allowing the laptop to continue booting (this was not possible before, believe me I tried!).

So, I still don't have full access to the BIOS but it's at least now able to do something other then serve as a paperweight. 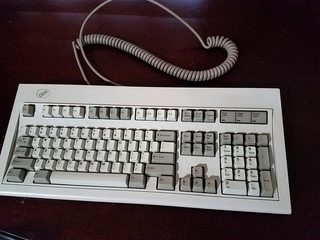 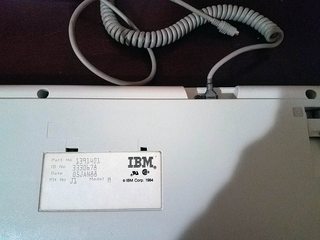 It wouldn't work properly at first due to the expansion port being caked in layers of dirt & dust. So I took the Amstrad apart and throughly cleaned it all out and used a combination of a pencil rubber & isopropyl alcohol to clean the contacts on the expansion ports. Whilst I had it apart, I also sprayed some contact cleaner onto the Volume Control to stop the crackling when volume is adjusted.

All working great now and I've been loading games onto a spare USB stick for testing. This thing is quite picky about what USB sticks it will accept though. It didn't like the 16GB stick I was originally going to use, so I'm temporarily using a 512MB stick until I can track down something better.

Also loaded the CP/M disk images onto it and had a quick play around in CP/M. I'll probably start playing around with CP/M software this weekend to see what this thing is capable of.

Played some 128K Amstrad games too, to test out the memory expansion. I love the speech on Robocop. 🤣

You know your Kalok HDD is a girl, when you power it on and starts blowing a lot of pink smoke!

I love ST-157A as well, we seem to have the same taste in hard drives 🤣

Replacing the guts would have been plan A if ever I was in your position.

Plan b would be using new high-temp caps and mosfets.

Update.. replaced the fuse and caps, plugged it in anddddd POP. Failed MOSFET. Oh well, it was worth a shot. Definitely not desoldering all the crap in there to get at it. Ordered a FSP400-60FGGBA Short-length Flex-ATX 400w power supply I'll be using to replace the guts with. Also ordered some slightly quieter Bgears b-Blaster 70mm fans (48cfm @ 4500rpm) to put inside the IWILL power supply chassis with the guts swap. Hopefully speedfan can control the fans on the motherboard headers, or maybe the BIOS supports it.

Got an VIC-II 5volt chip running in a board that delivers 12volt, using the adaptor that I hacket together yesterday.
The picture is not spot on. Still have those jailbar/vertical lines, and still have that red and green colour artifact.
Yet it is working.....

My retro activity for today, got SymbOS running on my Amstrad CPC 464: A bit of a novelty, but nice to use something that is able to see all 576KB of my RAM!

Tested out all the included apps and downloaded a couple of others. "Speech" provided some small amusement. 🤣

That's just got a cool factor to it. Not very familiar with the Amstrad, but I know somewhat of its limitations so seeing that OS running on it is just neat.

Googled around to find more information on an expansion card for one of my synths, found this ancient copy of the Roland JV and XP synthesizer FAQ on a Chinese forum: http://www.audiobar.cn/forum.php?mod=viewthread&tid=31801.

Tried to follow some of the links, found this awesome MIDI page that has a crapton of old software: http://archive.cs.uu.nl/pub/MIDI/ However, the Archive.org version shows it once hosted even more software - unfortunately the links to the ZIP archives are dead in most cases on Archive.org.

Googled the program name that interested me, and found not one, but two additional versions of what appears to be the same software archive, hosting the software I was looking for (Canvasman, a Win 3.x librarian for the Roland Sound Canvas):

I replaced the failed motherboard in my second hand Toshiba T3400CT notebook and it lives once more! I then discovered the mbr was infected with the V-Sign virus. Thanks previous owner. I've removed it by booting from a clean DOS boot floppy and running fdisk /mbr to rewrite the boot sector. It's no longer infecting floppies I put in so that's something. I'm still debating whether I format it and start with a clean installation of DOS and Windows 3.1 or whether I continue with the previous owner's installation as it works fine and is full of history.

Made my first attempt at retrobriting today. It's a face panel of a 1998 ATX case. I don't know the model, but I really like the case — looks similar to some of the pre-Jobs PowerMacs.

Notice how every piece of this case yellowed differently. The worst offenders are the faceplates of the CD and FD drives. I had to make the closeup photo, because otherwise it would seem completely uniform. The colors are still a bit off, but it's not that noticeable. Even the bright spot where a "Pentium III" sticker was is now gone.

It took around 3 hours for the whole piece, after that I've put the FDD faceplate separately for the remaining 3-4 hours of sunlight. I've used 14% peroxide (hair solution). Overall, I'm quite happy with the results, but I plan to make another go tomorrow.

Been collecting and sorting all my games.
They were basically spread across several rooms, stashed away in boxes and big shopping bags. Part was in my living room, which holds the games I tend to use more often.

I find it kinda hard to make up my mind in what the best way will be to store which games where, but I also want to have everything together where they belong. I typically get several copies of identical games and I want all copies together.

I'll do a headcount later, but at first glance I don't appear to have nearly as many games as I thought I would have 🤣
But it sure is fun browsing through all those boxes again 😀

The entire rear IO of my main PC appears to now be electrified. This concerns me greatly.

I should probably rebuilt this PC tomorrow.....