Hey everyone, I am new to Vogons, but I love old hardware.

In 2002 I bought a 9700 Pro just after launch. It was the best card I have ever owned, and it hangs in a frame to this day. The story there is, I overclocked the crap out of that thing, if I recall it was around 410MHz core clock. Stock was 325MHz. The card was volt modded, added a 10k pot to a couple pins on the VDDQ chip to allow adjustment of the VCore. I added a heatsink to the VDDQ at one point, but later on it got caught on something and I tore the chip off the card. 🙁 I wish I had a cooler story. Technically the card would still work, but I cant seem to get my hands on a replacement chip, nor do I have the proper hot air rework equipment to reattach a chip like that.
Ironically, after I took the photo of the 9700 Pro in the shadow box, I noticed the reflection of Gordon Freeman, our favorite mute hero from the greatest game of all time, HL2. I have a digital painting on canvas of him hanging next to my PC.

Ok Ok Here we go
On with the story. I created a project called ATi 1.0, nicknamed after my handle, 'ATi_Loyalist' It went through several iterations, the last one being ATi:Resurrected a long time ago, maybe 2004 or so.
I still have the case and some of the hardware and with the resurgence of retro gaming and PCs, I decided to rebuild my P4 system with the components I ALWAYS wanted when I was younger. I learned so much about modding with this case and it has been in a closet for 10+ years, it is my one possession, (next to my framed 9700 Pro and HL2 Painting) that I will never let go! It has a long and detailed history. The case was powdercoated red with multicolor flake, but I just dropped off the components at the powdercoater to get redone in silver with candy blue, and the chassis gloss sparkle black. Should get it back this week!

Current Build:
P4 3.4 GHz Northwood (dreaming of a 3.4GHz Galatin EE, as soon as I find one it's mine!)
Thermalright XP-120 CPU Cooler
Asus P4C800 875P Chipset, mean overclocker in the day! I looked at the Abit IC7 and IS7 too, and a couple Soyo boards, but went with Asus, I have always been an Asus fanboy.
Radeon X850 Pro, I also have in my collection, a 9700 Pro, 9800 Pro, 9800XT, FireGL X2-256t, I may swap one of them out if needed, but I feel the X850 is right on the edge of period-appropriate, and is at the last string of 98SE and XP compatibility
320 GB Hard drive, thought about an SSD but that is totally cheating at the retro P4 rig game! Right?
Corsair TX750 (the only semi-modern component in the build, older PSUs are tough to find, and I got this one at a great price!)

Sources include, local electronics recycler, eBay, and a monthly electronics swap meet I have been going to.

Also, I am not sure if this is in the right section or not, but if it should need to be moved, Mods please move. I am new here, still trying to learn all the different subforums! Thank you!

Also, I would like to add that I was sparked by some recent LGR and 8-Bit-Guy videos as well as PhilsComputerLab, on YouTube, that got me thinking, maybe this is a good idea....? Honestly, I always thought to myself, I HAVE to be the ONLY person in existence that even cares about this old stuff. And that there was no way anyone even remembered or cared about the Athlon XP days, when intel actually had something to worry about, or the early ATi days, trading blows with Nvidia, the rivalry, the benchmarks, I love it all! Hours spent benchmarking and overclocking, in pursuit of performance and fps, but I probably spent as much time or more on modding, benching and OCing! Who else is with me!?

Pictures of the case are always welcome 😊
Always enjoy seeing a nicely modded tower.
*drools*9800 XT*drools*
Had the pro version 256 back in the days with my xp 1800+. They are hard to find now, and the one I found turned out to be a scammer (tough luck for the guy we had the same bank).

I remember when the Radeon 9700 launched. It's performance was just jaw-dropping. Bunch of friends took the gamble and tried for the Radeon 9500 non-pro to Radeon 9700 unlock. Unfortunately, I had a GeForce 4 TI4200 at the time, and could afford to get them at launch. I only got the Radeon 9800 Pro (I guess about a year after launch), and it was still great.

Hey Vogoners, I am writing from my P4 system right now. Have some updated images. Case is still at the powdercoater this week. Hope to get it back soon.

I replaced the 15 year old TIM under the northbridge heatsink and the motherboard reported a temp drop of about 4-5C under load. Clearly this stuff has a lifespan! It was the factory pink clay-like TIM. Replaced it with some Arctic Silver Non-conductive Ceramique. Also used some Arctic Alumina 2-part thermal epoxy. This stuff is very strong so be 100% sure before fixing things with it. I tested the locations of all the MOSFET heatsinks before attaching them. I just realized the 3.2 is pictured here, I have a 3.4 in the system now. Still on the lookout for the 3.4EE!
I grabbed a new production all metal P4 Socket 478 bracket with backplate, the backplate is all metal too so I put a thin piece of plastic between it and the board on the back. So beautiful. Love this shot. So much nostalgia! These should add some stability to the power delivery circuit for the processor and possibly assist in overclocking. If nothing else, help the board run cooler for better longevity. What do you guys think, will this be enough? I think so.... The monsterous XP-120 with a nice UV Blue LED fan. Best I could do so far, DDR400 2-3-2-5. Runs fine at 2-2-2-5 so far, we will see. True 2-2-2-5 was hard to come by in the early 2000's, OCZ Gold series I believe, more like OCZ Unobtanium series these days. The 875 chipset is all about tight timings, it hardly matters anymore on modern hardware, but withthe 875 chipset with PAT, the maximum performance benefit comes with the tightest timings. Thanks! Will update when my case gets back from the powdercoater.

Keep us updated with more pics, I might have to re-think my rarely used p4 box as well...

Where did you get the mosfet coolers from?

Mosfet heatsinks here: https://www.amazon.com/Alphacool-GPU-Heatsink … acool+heatsinks
Listed as GPU RAM Heatsinks, but they are so tiny! Too small for BGA Ram modules on a GPU for sure. But the perfect size for Mosfets!

Sorry I have been very busy with work. I am a small business owner and it comes in waves!
I have lots of pictures to upload though, subscribe for updates soon!

Sorry I have been very busy with work. I am a small business owner and it comes in waves!
I have lots of pictures to upload though, subscribe for updates soon!

I know the feeling 😀

Just checking in, hope you are all well.
System is up and running, I boot it up once every couple months when I have some free time. Working my way through Unreal, and Alice (AmMcgee) at the moment.

It had the old backplane that I had hacked on and fiddled with several times over several iterations of case 'eras', and I decided to draw up a new one and waterjet it. I removed the rivets and brackets from the original Lian Li backplane and scanned it on the office scanner. I measured a few dimensions on the physical piece and scaled the scanned image in solidworks. This allowed me to create a 2D file to use for waterjet. 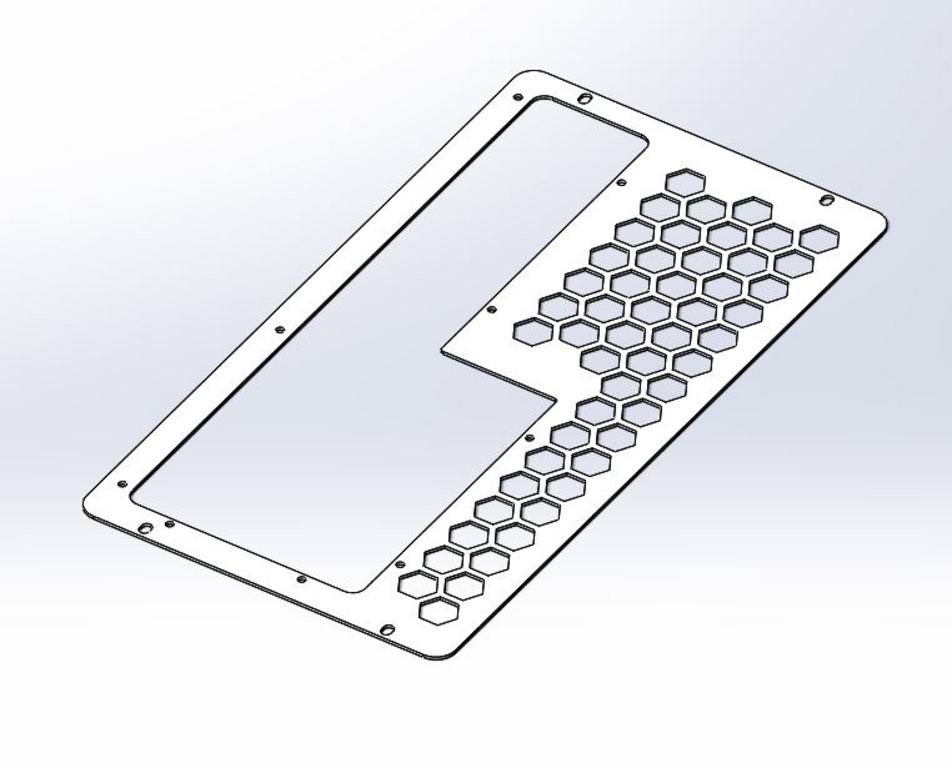 On the right is the new piece. 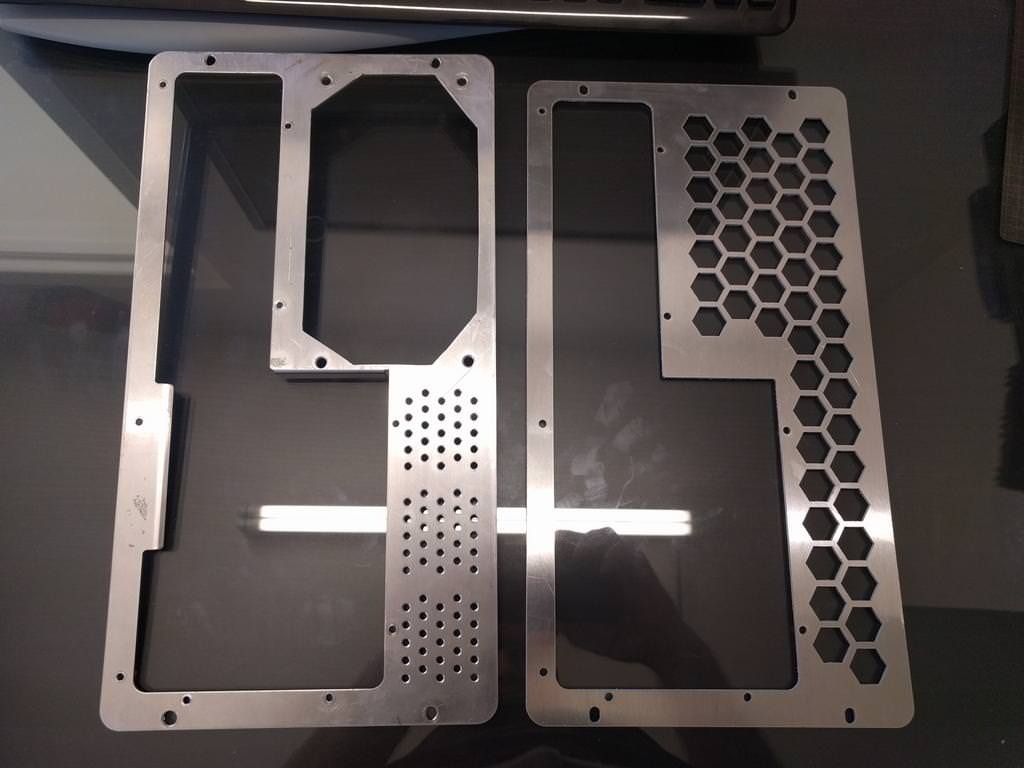 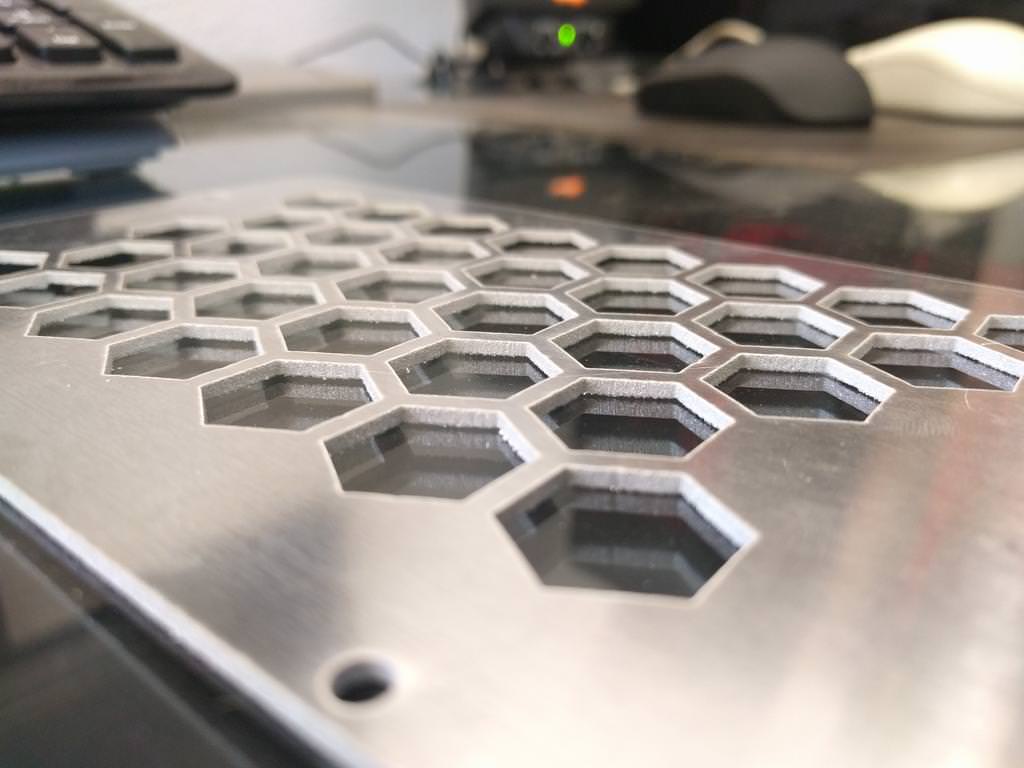 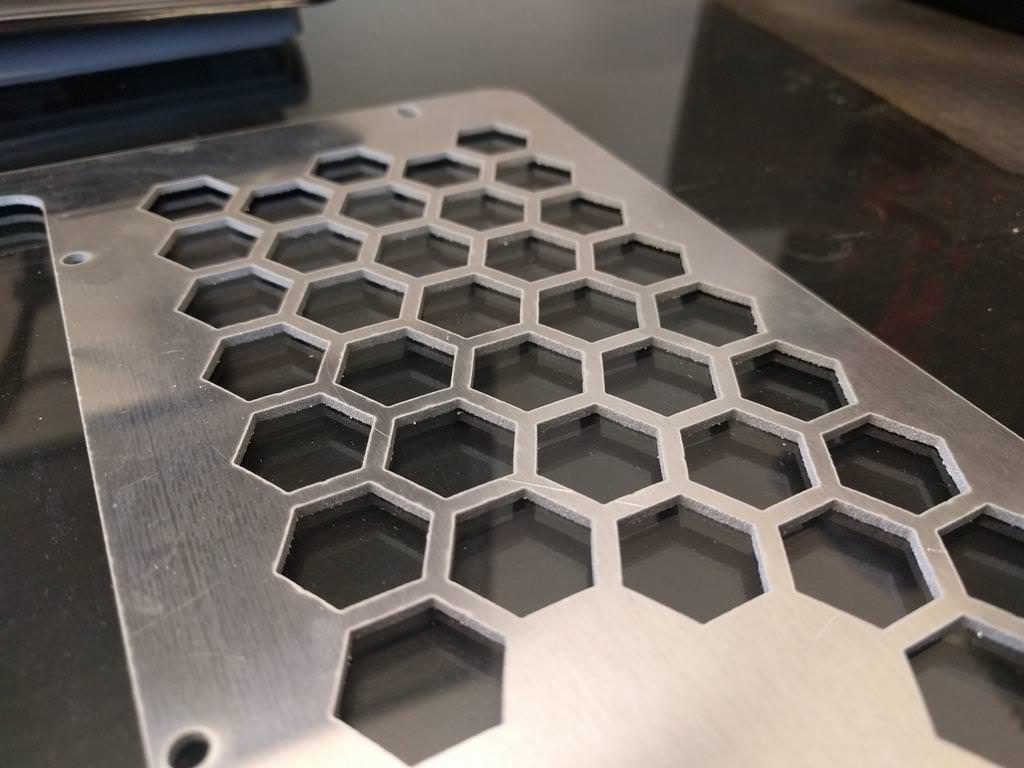 And installed in the old chassis: 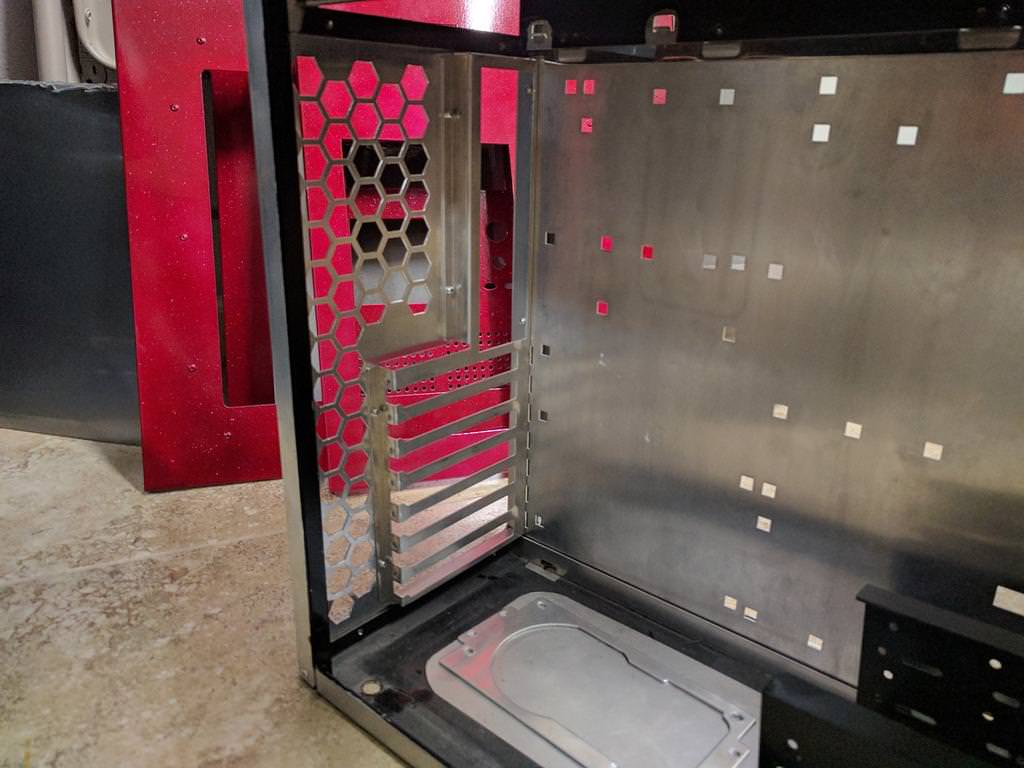 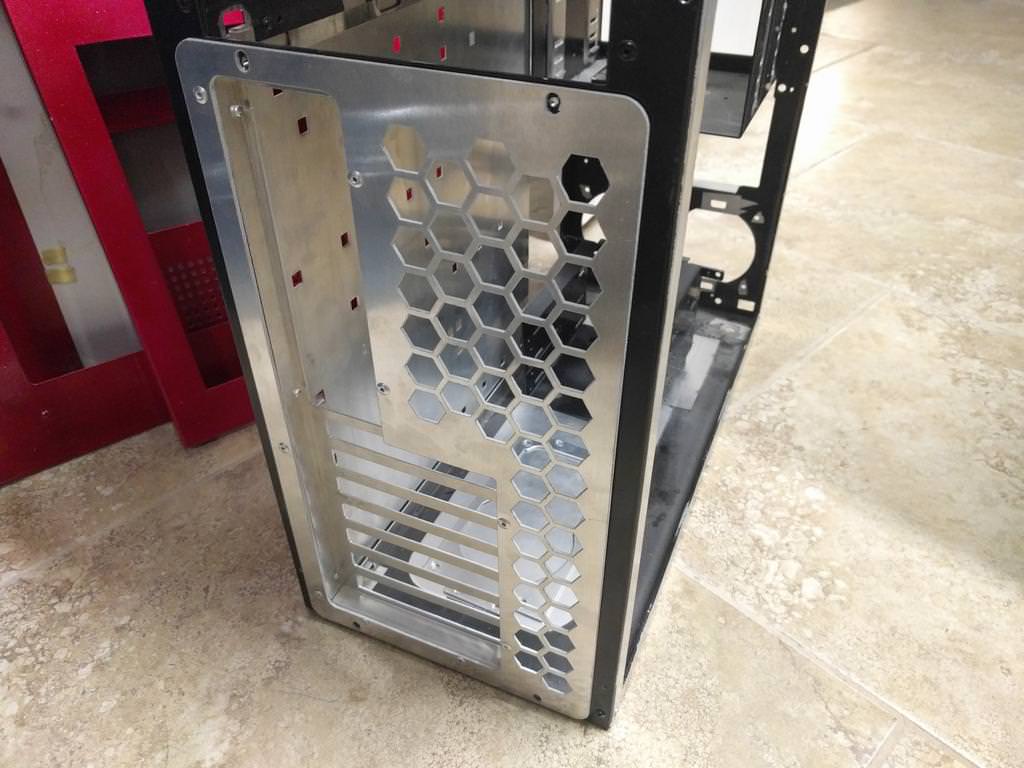 That's seriously awesome keep up the great work. Be sure to post some more pictures of your rig.