Old hardware you didn't take or buy... but might still want?

I've basically gotten most of the stuff I really wanted, but I clearly remember having made the decision to not buy that NV1 and the next time I was in the thrift shop, of course it had already been sold.

I regret that I never asked my primary school whether I could buy or get their old 386/486 systems around the year 2000 when they were phased out of the class rooms. I believe they all went to east Europe for a third life.

I believe they all went to east Europe for a third life.

That's what they told you 😀. By that time we were mosly in Pentium territorry. In 2001 we got our first batch of P3s.
I do regret throwing out our scools 486 machines. And all those VLB cards that I hated back then.

I've got one in my collection! 😁 I likely pulled it from an even-then old XT I was throwing out while working at a local computer store... 20 years ago 😉

I regret that I never asked my primary school whether I could buy or get their old 386/486 systems around the year 2000 when they were phased out of the class rooms. I believe they all went to east Europe for a third life.

That's hilarious because I sold my CAD teacher some 386DX40s in like 1997 for use with AutoCAD 12 (DOS) because several of his DX33s failed.

When I first got back into old computers in 2012 the Goodwill Computer works store near me had a TON of really good and now more expensive AGP And PCI Video cards in boxes selling for next to nothing. Also had some Super Socket 7 boards and other goodies. But I was only concerned with older ISA and VLB ca dos at the time and passed them all up.

There was this plush crocodile toy I saw in a store once. It was expensive; like maybe $40? But it was niiiiiice. Looked almost real and the texture was amazing. Still regret not getting it.

The Phoebe casings come back regularly on Ebay.
I saw a few units less than 2 months ago.
I believe somebody has a stock to sell ...

I bought the working one listed about 4 months ago 😉
It was an interesting machine with working hard drive, with lot of nice things to preserve, including :
https://www.domesday86.com/?page_id=936

I didn't take a Gemini Galaxy 2 (z80 British home computer) or a Mostek MDS due to space issues. I also (quite some time ago) saw a Sun Voyager going for cheap but didn't take it due to not being interested in old computers at the time.

There was this plush crocodile toy I saw in a store once. It was expensive; like maybe $40? But it was niiiiiice. Looked almost real and the texture was amazing. Still regret not getting it.

I have an opportunity to get an Abit SA6R board for around $20... been considering it, but that's more than I normally spend on one old board. It looks to be in good condition. I know 815\815E board aren't that common, and this looks to be a decent board... but how does it compare to a solid Apollo Pro 133T board like the ASUS TUV4X or AOpen AX34-U. Or a really nice 440BX board like the Abit BXII RAID? I have all of these (some need extensive recapping), and I hope to eventually have one ideal P3 setup to play with, but its hard to decide. I know the BXII doesn't officially support 133Mhz FSB or Tualatins, and its a much older chipset so lacks other nice features, but it is highly praised, so there has to be a reason for it. The AX34-U is probably the best candidate for an ideal P3 setup since it has an ISA slot as well as Tualatin support... but I know VIA chipsets of this era aren't known for their compatibility and reliability. In what situations is that likely to be an issue and is an 815E board better?

i815 is a pretty good chipset but I kind of favor 133T over it for being able to use ISA slots regardless. That said, my general purpose retro PC is an i810 and I find it to be exponentially hassle free compared to th 133T bench build I had a couple months ago. VIA is.. well, VIA.

I passed up a huge haul of old parts because of the promise that we would return. It's been 4 years and I'm pretty sure most of it has been recycled. (even though I am going down there this summer to look!)

I visited a fairly large PC recycler that has a retail store attached that sells some older pc parts and systems and sometimes gaming consoles and I found and bought some really cool items including an old TI-99, a Yamaha sound module, an IBM Aptiva (Pentium 75) with the fancy sliding front case thing (it was exactly like the one I owned in University back in the mid 90's so I was really excited), an original Sound Blaster in the original box(!), a couple Coleco Adam systems (complete) and some other items I have been looking for for a while.

Then one of the employees showed me that they had an old original Apple IIe system as well that looked to be in mint condition. I don't know what was with me that day, but I just totally disregarded it thinking that they would be asking too much or that I shouldn't buy anymore stuff. I can't believe that I thought that since I really wanted one of those systems since it was very nostalgic to me (it was what I used in Elementary school in the 80's).

I did give them an offer for everything else and they accepted it and I left there feeling great about my sound blaster and Aptiva purchase, but when I got home I started to think about the Apple system in all it's brown/beige glory in mint condition and I can't believe it that I didn't even try to give them an offer. Looking back I would probably trade everything else I got (except the sound blaster in box and yamaha midi module 🤣) to have that Apple IIe in that condition. This happened a couple years ago and it still bothers me today...I'm not quite over it yet. Oh well, maybe it wasn't meant to be 😢.

I really regret not snatching one of those brand new Audician 32s on ebay a month or two ago. The prices had started going up so I decided I'd wait until I got through my holiday spending even if it meant paying even a BIT more later on.... but they've since vanished altogether.

Around late-2017, I wanted to buy a particularly ultra rare model from Toshiba's own "Dynabook" product line. The model is "2540S" (also known as PAS 254 N 8), it has the following specifications:

There are two reasons why I couldn't buy that laptop:

- It is untested, and yes, I do NOT like STN screens. The one that they were selling on a Japanese thrift shop in my country didn't come with any essential accessories (such as AC adapter).
- Drivers for this particular laptop is ultra hard to find, as there are no available recovery CDs nor available drivers on the internet for this model.

Here's the picture of that laptop. 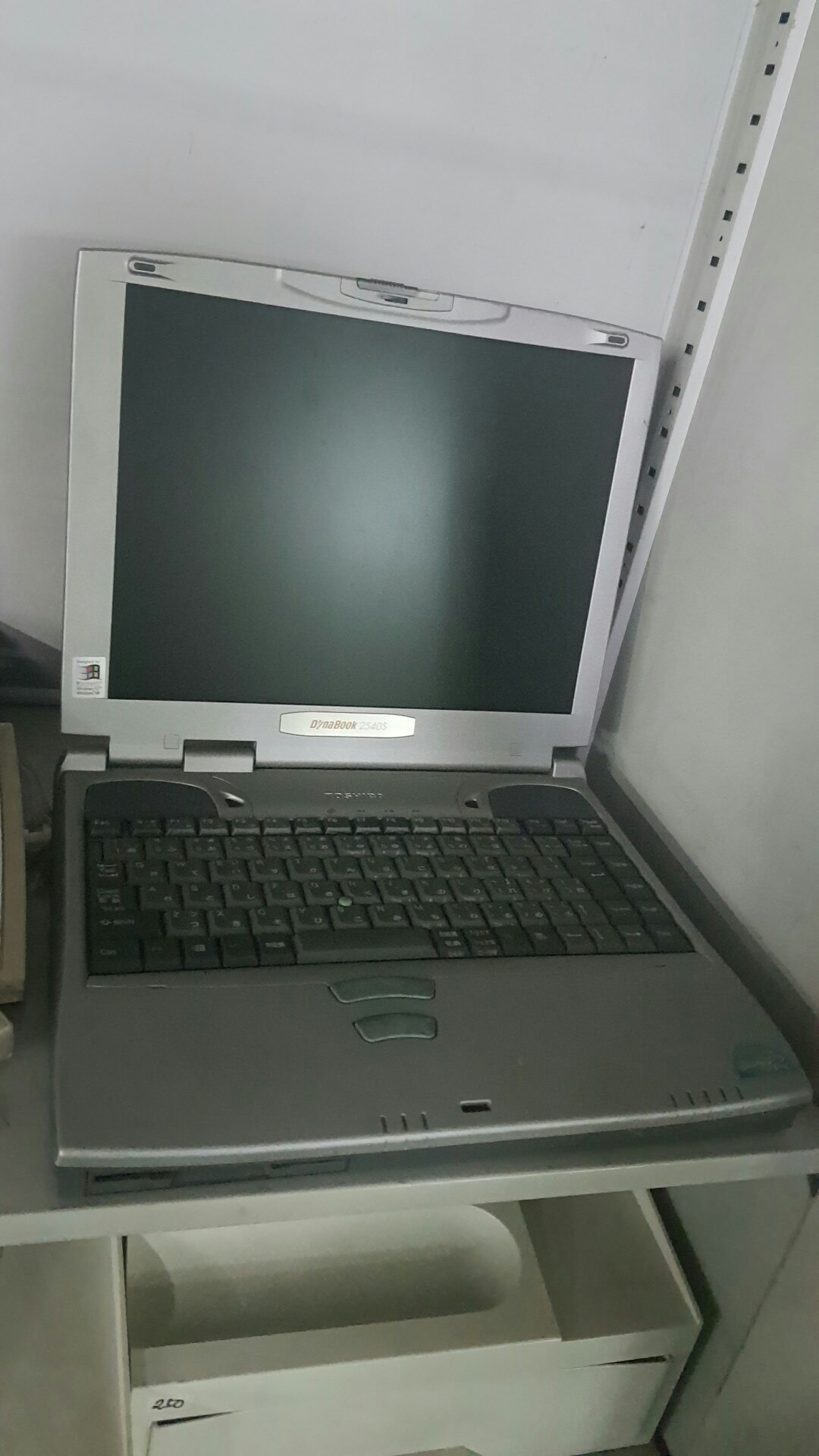 A couple years ago, I found an AT&T PC 6300 with keyboard and color monitor at a Goodwill in Nebraska for $100. I nabbed that sucker right away.

Sadly, the expense of the AT&T PC meant I no longer had enough money to also buy this, which was sitting on the same shelf right next to it...

Yep...a G4 Cube including monitor and basically everything else, with the only apparent defect being a faulty optical drive...for only $90.

I'm not into collecting old Macs near as much as old PCs, but this I definitely wanted...if only I had the money for it at the time. 😵

Yep...a G4 Cube including monitor and basically everything else, with the only apparent defect being a faulty optical drive...for only $90.

The G4 Cube was in many ways, lots of sizzle but not much steak. Yeah, the design was striking, but it was expensive and performance limited with a huge external power brick. Plus the issues with the plastic outer surface and overheating in more challenging ambient conditions.

Was nosing around one of the more chaotic thrift shops in one of my old stomping grounds when I spotted this: Unfortunately they still only took cash and I had none, and by the time I was back with some it was gone...

Some of this is recent hardware, other is kind of old....
Though there are a few pieces of hardware that I am missing in my collection.

I regret not getting all this, at the time when it was still fairly cheap.
Now it all cost a leg, an arm and half a soul.