Most frustrating part of working on old computers?

Latest was a Diamond Monster II 3D 8MB but the most soul crushing was certainly the Yamaha Wavetable DB that disnt work.

-Recapping a Macintosh IIcx logic board, only to find that it'll only boot properly with 4 MB of RAM in Bank A, and the other banks of RAM that seem to be higher-density are either invisible in Bank B, result in Chimes of Death in Bank A because the system can't see them at all, or work with a stick from the 4 MB bank, but only register as 4 MB.

Keep in mind that I don't have any other computers that run on 30-pin SIMMs, so I have no means of actually testing all that RAM otherwise.

-Also finding out post-recap that the real reason the system wouldn't respond to the soft-power buttons was simply that the standby power line to the soft power circuit had its trace cut and I didn't realize this until much probing with a multimeter later. It's plausible that some of the memory traces are cut somewhere and I haven't found them, because I can't think of any other reason for the above issue.

-And then finding out on top of all that that the stock 80 MB SCSI HDD only works intermittently, and seemingly after it's warmed up a bit. I suspect failing electrolytics on the board, as the drive doesn't have any bad sectors or clicks of death.

-PROPRIETARY POWER SUPPLIES. I'm looking at you, Mirrored Drive Doors Power Mac G4! Sure, it's trivial to ATX-mod, but actually fitting a standard-size ATX PSU in there isn't happening unless you want to give up your optical drive cage and route your power cable from the front. Actually fitting a PSU where the stock one went will require some improvisation with an SFX or TFX form factor model, and quality 400W and over units in those smaller sizes don't come cheap.

-Floppy disks that just love to scrape their contents on the drive heads, forcing you to disassemble the drive and swab all that crap off the heads while the realization dawns on you that whatever was on that disk is most likely lost forever at this point. That goes double for 400/800K Mac disks, Amiga disks, or any format that cannot be read on a standard IBM PC floppy drive.

-Trying to get drivers or other software onto a Win98SE or earlier PC without working Ethernet (and thus network file sharing). USB Mass Storage isn't implemented in the OS, so you either have to transfer things a mere 1.44 MB at a time, or burn through CDs like crazy. (Funnily enough, Mac OS 9 is a lot less of a pain to work with for this exact reason, provided that you have other computers that play nice with HFS+.)

I also consider one of my Intel PCI Ethernet NICs exceptionally valuable for this reason; Win98SE already has drivers for it, no need to deal with Catch-22 situations like that.

-Dead laptop batteries, like on my iBook G4 that also relies on the main battery to preserve PRAM contents. Granted, this is also a problem with new computers, seeing as my Fujitsu T902 also needs a new one and replacements are like $120 at the cheapest. It'd help if they weren't a pain to recell with fresh 18650s.

-I haven't run into any of these cases yet, but I've seen more than my fair share of complaints about exploded CMOS/PRAM/etc. batteries on vintage computer boards corroding traces and all that, if not outright blowing holes into the PCB. I figure it's only a matter of time before I run into a board that needs extensive repair for that reason.

-Local computer stores that just throw their cards into a loose bin with no anti-static bags or protection from each other. I got a few of my more valuable graphics cards this way, but now I have a GeForce FX 5950 in need of a replacement tantalum cap, as well as a Voodoo5 5500 AGP (!) with a bent-up PCB and some missing surface-mount resistors and MLCCs on the back side. Miraculously, that V5 worked when I tried it!

Have everything in order 🤣

I hate when I need some cable/splitter/memory/cpu/heatsink... and don't have it at hand... go through my boxes which takes a few days and still don't find what I need. Only to find it later when I don't need it anymore. And this happens a lot lately 🤣 Also finding the right CF card that has some Windows 9X already installed, only to do a fresh install of Win95 a few hours later which took around 30min 🤣

Looking to buy a specific component (VGA or CPU...) and don't find it anywhere for years...

Latest was a Diamond Monster II 3D 8MB but the most soul crushing was certainly the Yamaha Wavetable DB that disnt work.

Darius from DOS-Reloaded.de recently repaired one.. also did not work.
Maybe he can help ?

Have everything in order 🤣

I hate when I need some cable/splitter/memory/cpu/heatsink... and don't have it at hand... go through my boxes which takes a few days and still don't find what I need. Only to find it later when I don't need it anymore. And this happens a lot lately 🤣 Also finding the right CF card that has some Windows 9X already installed, only to do a fresh install of Win95 a few hours later which took around 30min 🤣

Yes, this is at the top of my list for sure, along with getting old heatsink off old cpu's (ones with adhesive), dealing with bent pins, bringing something out of storage that once worked and doesn't work anymore, and transferring large files (time).

Cleaning off the obvious dirt with water and dish soap, quickly drying it off and then putting the card into a sealed box with some coffee powder for a few weeks usually works for me to get rid of that awful smell.

That said, I hate smokers, too. Poor hardware.

I recently got a Tandy 1000 and an AGP/ATX/Socket 7 setup from a chain smoking hoarder. The amount of cleaning I'm going to have to do before I can stay in the room with them long enough to hook them up and see if they even work makes me wonder if they'll ever get turned on again. 😢

Hehe, I think the answer is the same for all.

Getting the gosh darn thing to behave properly! One way or another! 😁

I had to get rid of an old Performa 5200 when it's case practically disintegrated whilst I was moving it.

I think I also managed to snap one of the plastic HDD brackets on my Power Mac G3 Beige.

I've superglued and JB-welded so many clips of my Performa 630CD. Gonna try to sell it now, really cba'd with fixing it up anymore. Every time I work on it, something breaks.

I've superglued and JB-welded so many clips of my Performa 630CD. Gonna try to sell it now, really cba'd with fixing it up anymore. Every time I work on it, something breaks.

Heh, in a few years, 3D printers will be so good that I can finally reprint me a shiny new sturdier case for an old ThinkPad. 😁 (one can dream, though)

Even my collection of Commodore and AppleII hardware was easier to deal with..

Ah... yes. Definitely. Old hardware tends to be more picky about anything, really. I got a K6-2 from a friend and it came with the infamous PCCHIPS M598LMR motherboard, rev 1.3A. It was all fine and dandy, when all of a sudden it died on me. First it stopped POSTing, no beeps, then it simply wouldn't even turn on. Tried everything to no avail. I then decided to buy a replacement, also a PCCHIPS M598LMR (unfortunately, but they're plenty available here in Brazil and so they're cheap) , this time rev v5. I replaced the old board with the new one and the machine comes alive again!........ that is until I popped everything back to its case and it worked fine for some time, until the same thing happened again; it just died. I got very frustrated and boxed everything for about 8 months and never touched them again until recently, after moving to a new place and working out what I was gonna get rid of and what would stay. I was keen on keeping the K6, so to the test bench they went- and both POSTed beautifully!! I was SUPER FREAKING HAPPY, needless to say. I went from 2 dead mobos, to 2 working mobos! I had the K6 back! I had no idea what happened, I was almost sure that I scared them into working again.
So, off the test bench, into the same case again. Tried turning it on and guess what? Nothing happens. AGAIN. That was my mistake right there- turns out something, somewhere, on the case was causing a short on the motherboard, causing it to die. It had to be, even though I couldn't visually identify anything that could be causing the short. Trashed it and moved it into a newer unused case I had lying around, and there it sits alive and happy to this day 😁

Getting elbows deep into a project, having it fully dissected all over my work table, and realizing I'm going to need a $5 replacement widget that will take a minimum of 4 weeks to track down, buy, and ship. Then having the stupid dilemma AGAIN of whether to spend an hour carefully putting it back together only to repeat all the work when Replacement Widget finally arrives, or just leaving it there to occupy my workspace for god knows how long. Or maybe just wholesale the lot out my 4th floor window into the dumpsters below. Blaaaagh. 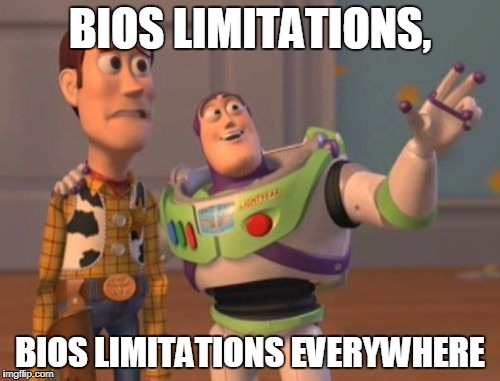 When I attempt to install a hard drive bigger than 2GB in my Packard Bell, it either detects the size smaller than the original size, or doesn't get detected at all. I'm planning on buying a Western Digital Caviar 36400 HDD for the system since that drive has a jumper for the HDD limitation, but I can use the Ontrack Dynamic Disk Management program to use the full HDD space.

I've just encountered another annoyance just now: Early-2000s Dell Laptops. When they work, great! If not, well, I sure hope you have your screwdriver handy 'cause you're probably gonna need it.

I was battling with my Dell Inspiron 8000 due to its pesky little trackpoint causing the mouse cursor to move on its own, that, and its tendency to randomly stop detecting its hard drive to the point where I have to pull it out and then push it back in to get it to work again. It finally works now, but I had to place an order on a new keyboard because of the annoying broken trackpoint as I'm sure you know. Man, that was so damn frustrating! 😠