I soldered in the two jumpers. J11 doesn't seem to do anything as far as I can tell. J9, when open (the default is closed) causes the system to not boot up.

Memory wait states can be adjusted using chipset registers according to the manual.

I got a receipt from CPU Shack. You can always just send him a PM to find out.

Did that, ordered the FPU (and another CPU) and it's on its way 😁 Thanks!

OK - not sure I'll get to it right away (still don't have the package) as I am busy with my PS/1000 and hah, life, but yeah, will do, I have a thermal scanner. Did you have any specific benchmarks or tests you'd be interested in?

8087 is usually stressed for stability using Autocad. I suppose you might also be able to use FRACTINT. I'm not too concerned about benchmark results (Though that might be interesting), but I would like to know if the FPU is stable at speeds exceeding 1oMHz.
I think I read these D9008D FPUs are also 387 compatible, so it would be interesting to see if it would be possible to test that.

And, no luck initially - 87test.exe failed to load with the native DOS 3.3, and on a 6.22 boot diskette it at least ran, but with divide overflow errors (can CTRL-C out of it).

I heard d9008d may be 8mhz natively. You can try de-turboing to see if it helps.

General apologies for the poor image quality, I bought a $60 smartphone to do three things - call from, text from, and use for 2FA. I did not consider the camera at all. Welcome to 2004. 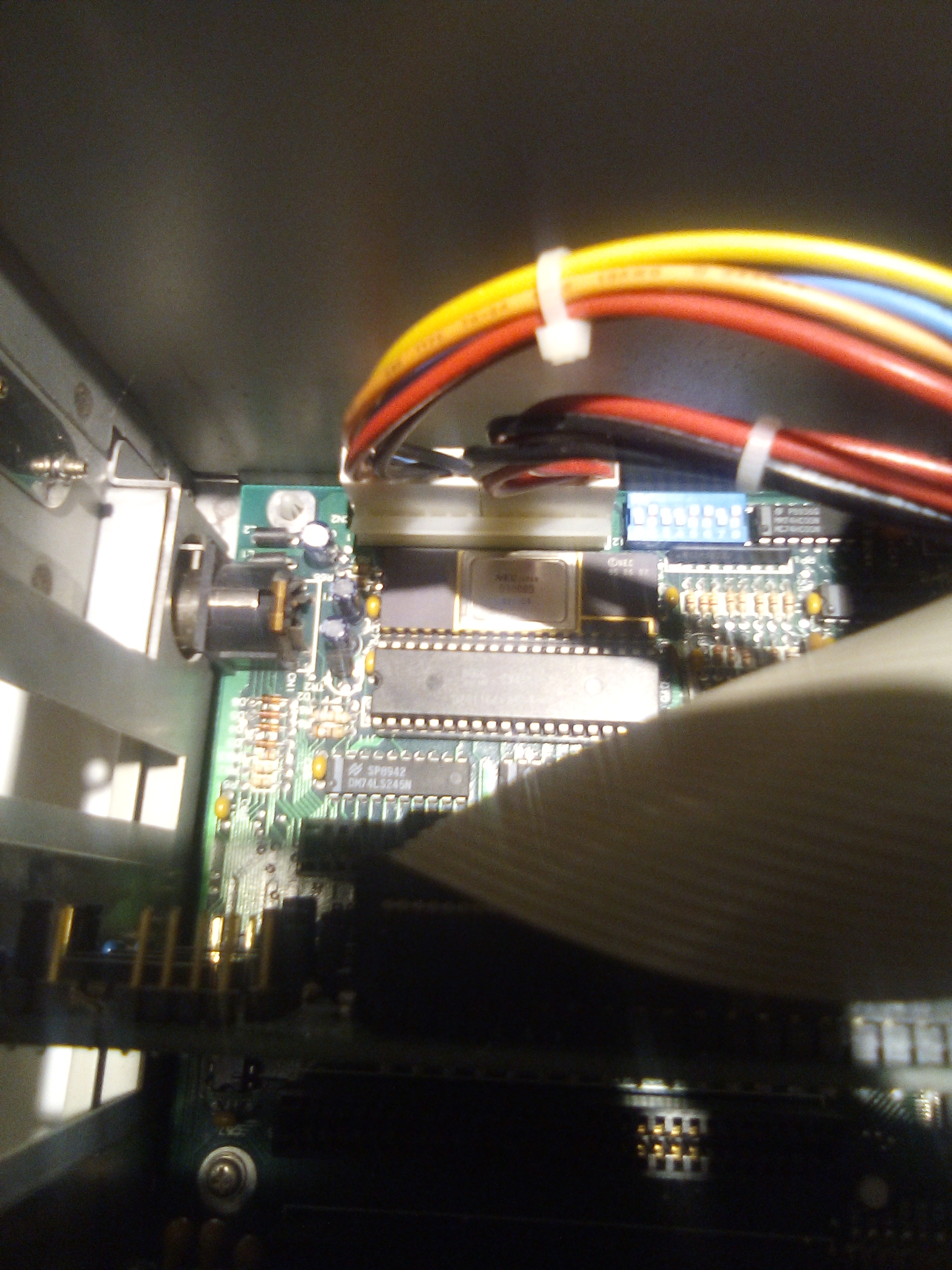 So I ran sysinfo off an old boot diskette and I got this: 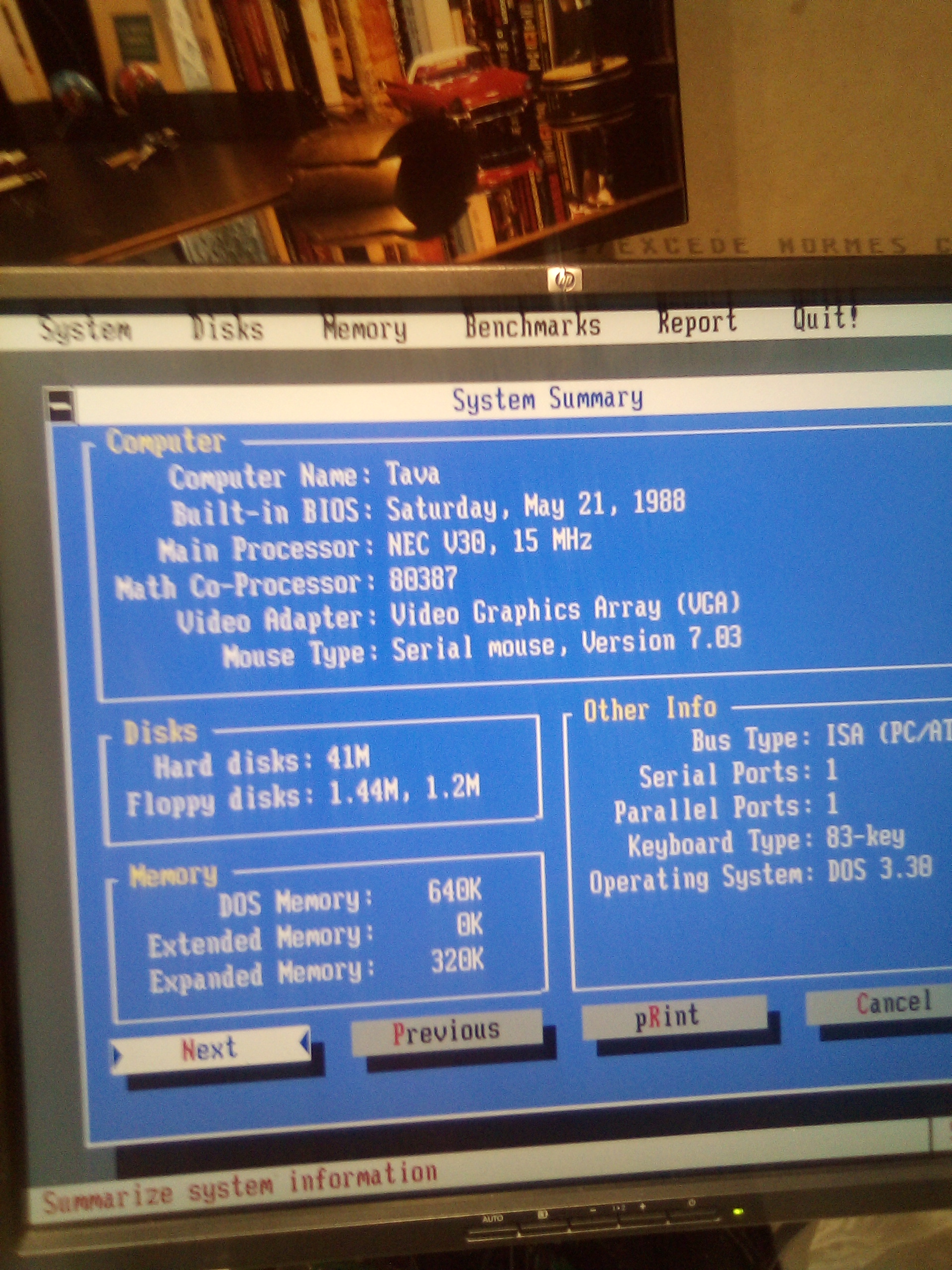 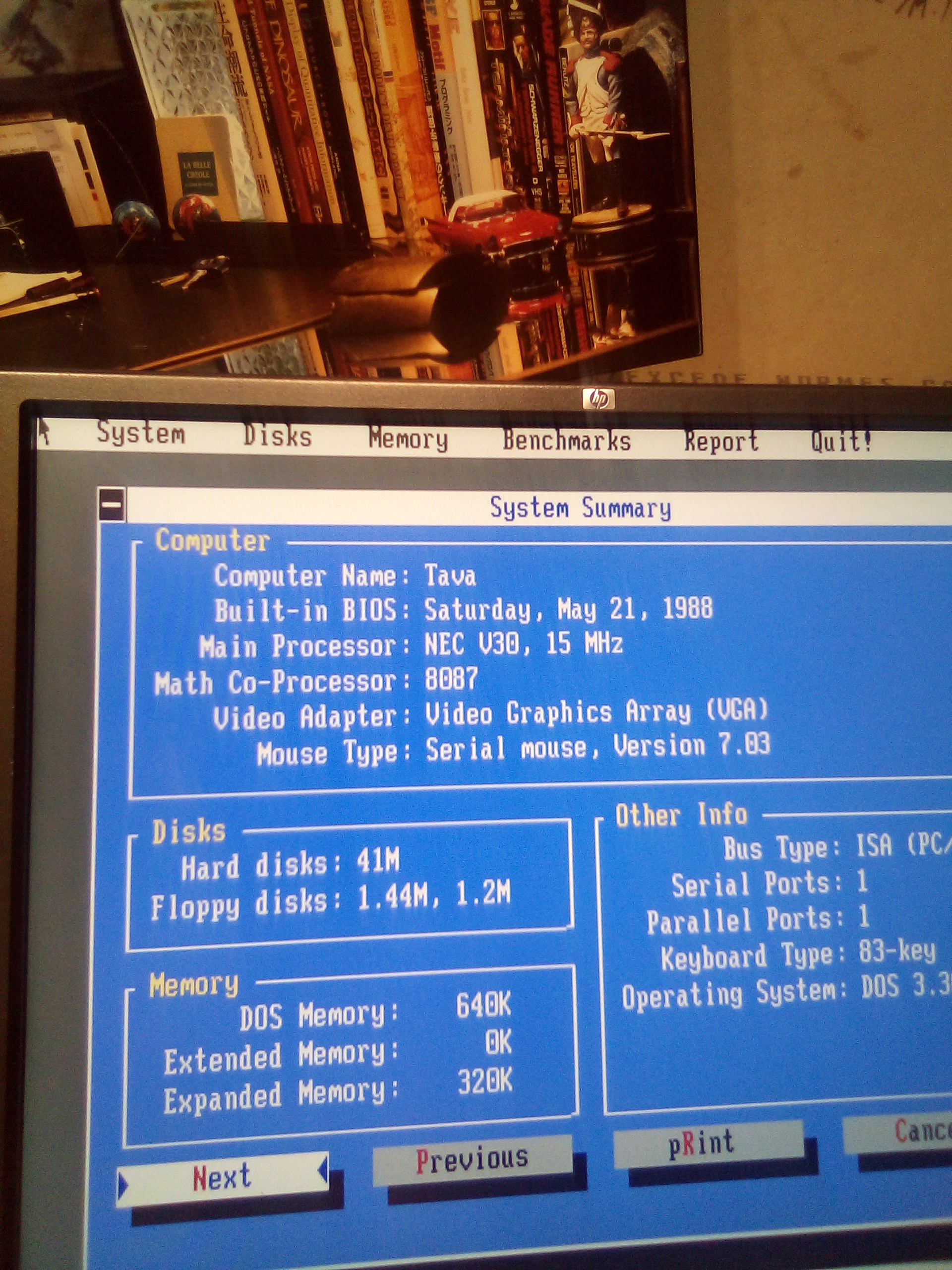 Checkit tells me this: 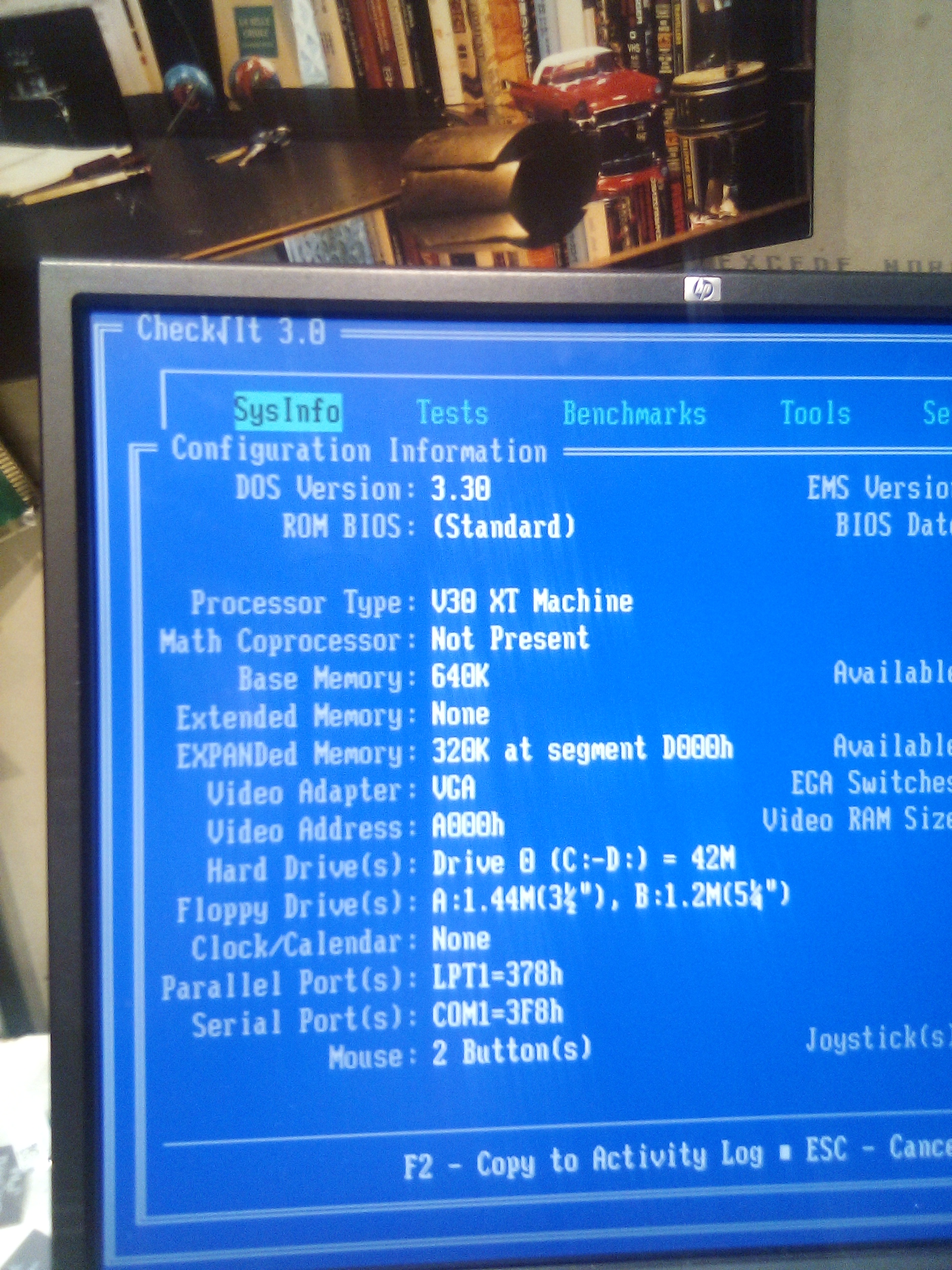 But sometimes it'll also call it a V20. 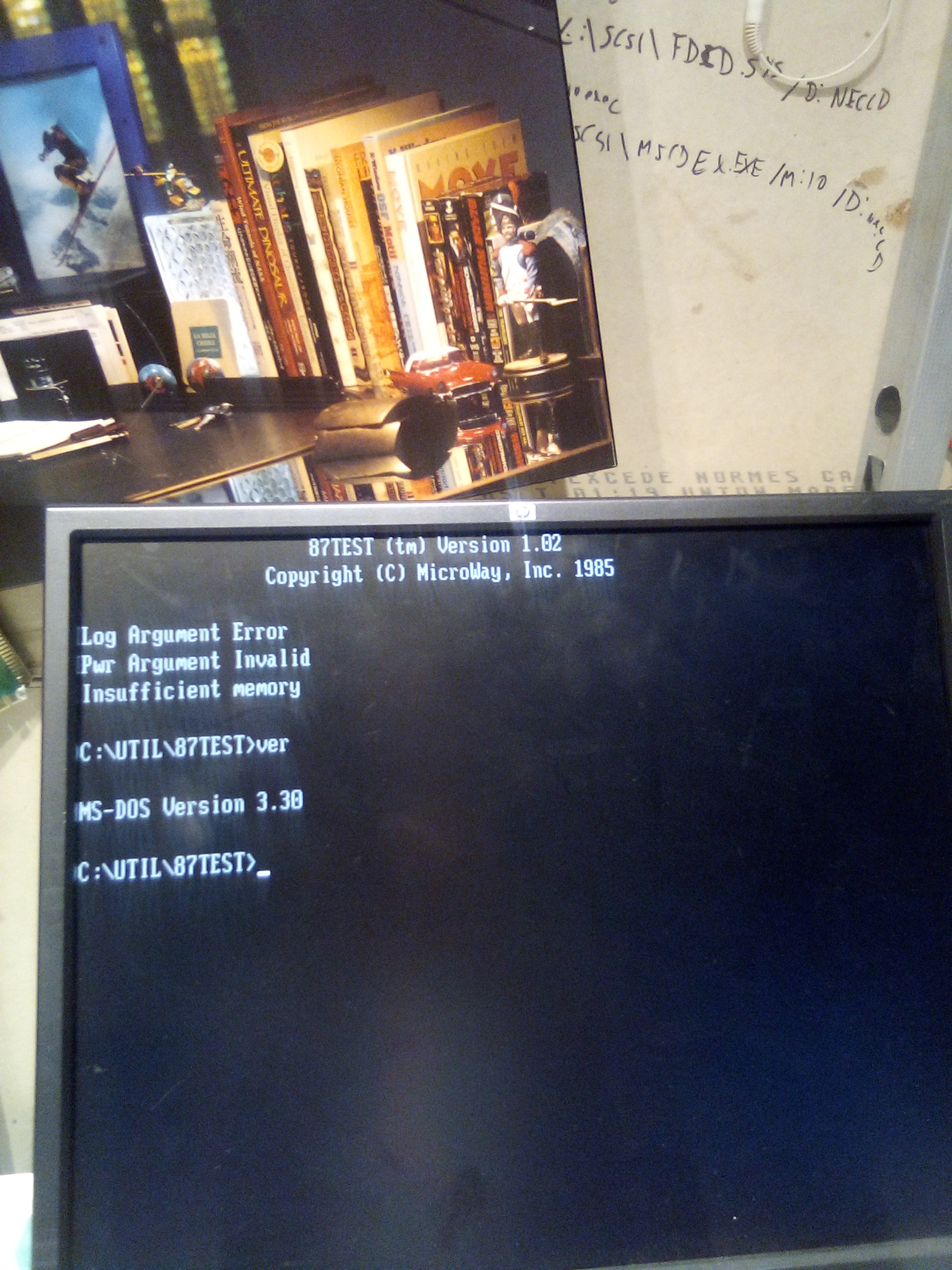 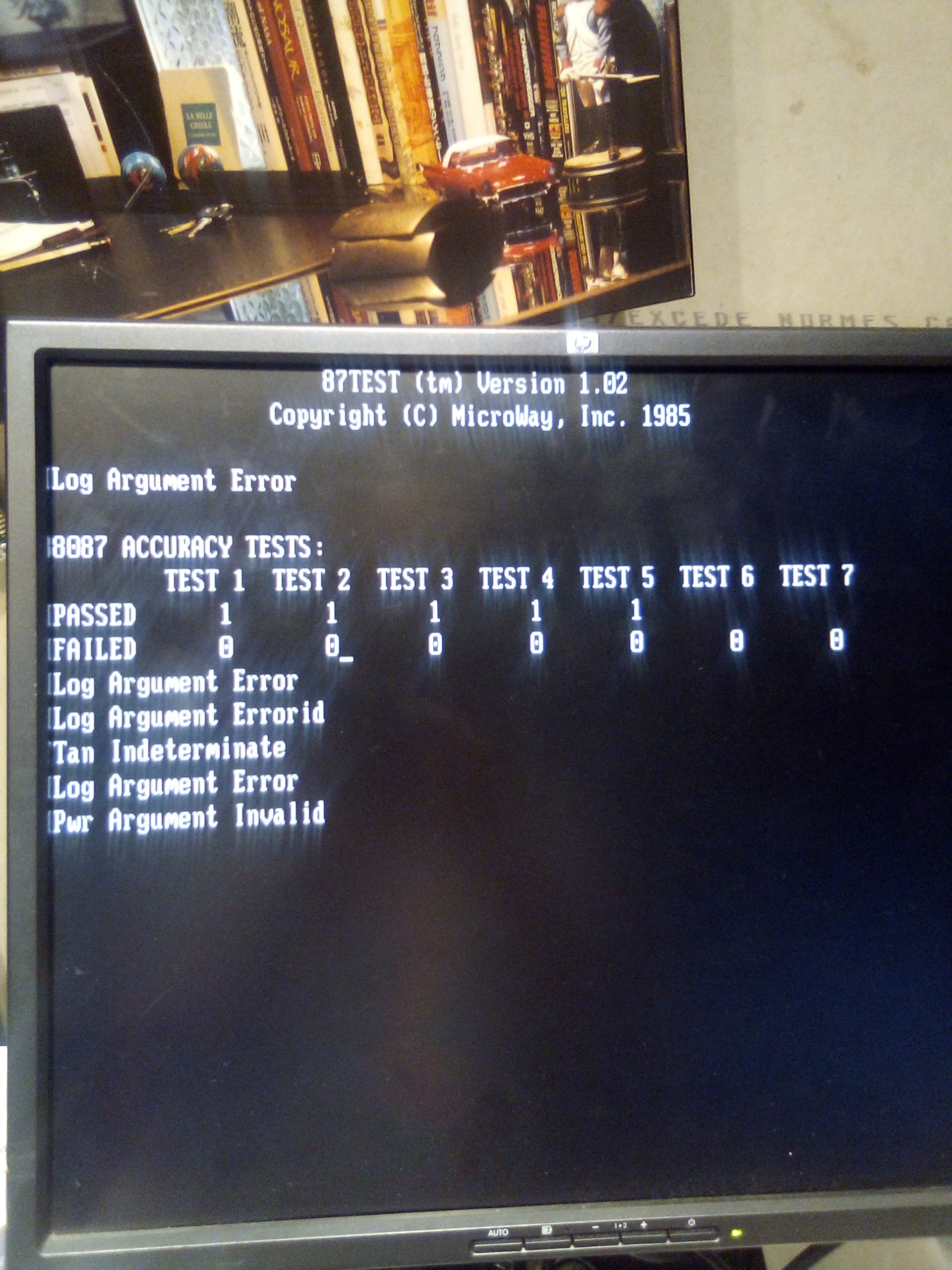 The second line keeps populating with zeros and beeping wildly. CTRL-C exits and returns to DOS.

Some weird stuff happened to the system at some point - I tried to edit my autoexec.bat and config.sys files using DR DOS 7.03 (because I forgot how to EDLIN) to install an SCSI CDROM run off a Future Domain card(yeah, that didn't work) and the files vanished. Kind of. DIR didn't list them, but TYPE did. I got them back by running EDLIN and the file name, then issuing the END command. They then appeared in the DIR listing. Also, A:\ drive won't update the DIR listing when a new disk is inserted - you gotta take it out, DIR again, wait for it to fail, then put a new diskette in - with or without co-pro. This a DOS bug, or something with the floppy controller (which has its own BIOS)?

(the sound card does work, there's a Sierra card game on the hard disk 😉 )

Your video is kind of a mess and pretty hard to follow.
From what I take, your system does boot up with the D9008D installed, so that's good I guess.
I've never tried 87TEST so I can comment on what normal behaviour should be. Maybe it's supposed to beep like that? In any case the tests that it ran were all passed. Not sure what test 5 and 6 are all about. Maybe they're for 387s. Do you have any documentation for 87test?

The other weirdness that you've been experiencing, is that FPU related, or something else?
I remember there is an extra jumper for the FPU in addition to the one on the main DIP switch bank. For whatever reason J10 has settings for "Normal Mode" and "Coprocessor 8087 mode". I remember with a real 8087-1 my machine acted funky in "Coprocessor 8087 mode", but worked fine in "Normal Mode".

Yeah, it's an unrehearsed live stream, just "do". I don't have time to make proper vids anymore 🙁

87TEST is what VWestlife used here:

The PC's weirdness is, AFAIK, not related to the FPU. Could just be buggy copy of DOS (I seem to remember my 286 doing something similar with diskettes, running 3.3 as well), but the system does work well after it has "warmed up", like an old carburetted car. I'll have to investigate it (lol when I have time).

The extent of the 87TEST documentation is:

I remember there was an FPU test that checked for the IEEE-754 compliance. It may have been the one that came with i387 and 287XL FPUs. That would be an interesting one to run on the D9008D.