Hmmm I have a real mode 386 emulator somewhere, wonder what my Tandy 1000rlx would do with it

As it's not an official game, you have to be running CFW on the PSP, which disables signature checks, then the game will start.

I installed the CFW 6.61 Infinity Pro on my PSP and the game now works. Thanks.

I've found a few new bugs in your game. I'm not using real hardware though, I'm using the 86box emulator which is far more accurate than Dosbox. (it actually runs 8088mph properly for instance)
If these are emulation bugs, just let me know.

Also some feature requests:
*When re-selecting MIDI as the sound output, allow to also re-select which device and address the MIDI output is at. Currently you must select a different type of sound output, then select MIDI again in order to get the menu.
*Add an explosion effect for the bombs
*Add support for Sound Blaster OPL2 (I think this is just a matter of giving a choice of device address location. Adlib is at 388h, Sound Blaster can be at 220h, 240h, 260h, or 280h and is denoted with the BLASTER environment variable)

This is weird, it's exactly the same MIDI messages over both SB-MIDI and MPU-401. Could it be that your emulator is configured so that there's an MT-32 (or its MIDI mapping) on the MPU-401 port, whereas the emulated SB-MIDI has a General MIDI mapping?

Add support for Sound Blaster OPL2 (I think this is just a matter of giving a choice of device address location. Adlib is at 388h, Sound Blaster can be at 220h, 240h, 260h, or 280h and is denoted with the BLASTER environment variable)

Was there actually any Sound Blaster hardware that didn't have the OPL chip exposed at 0x388, and JUST at the SB base address? IMHO it would just be a theoretical exercise with no real world application.

A new version of the game is out, I have ported it to the GBA, and the DOS, 3DS and PSP ports have also been updated 😀

Since I went for a bit more sophisticated visual style, it might not run as well on older (pre-486) machines as older releases, but I think it's worth it (and didn't want to be limited by older machines this time around).

The game now also has a global leaderboard: https://loonies.thp.io/

Now, how are scores submitted to the global leaderboard you ask? Easy -- once you achieve a high score and enter your name, the game will show a full-screen QR code that you can scan with your smartphone and visit the submission URL -- no DOS TCP stack necessary 😉

Also, in addition to the default English and German localisations, there's also a French translation now.

If anyone wants to do an updated YouTube video / review of the game, that'd be appreciated 😀

Screenshots from the DOS version (screenshot made in DOSBox): 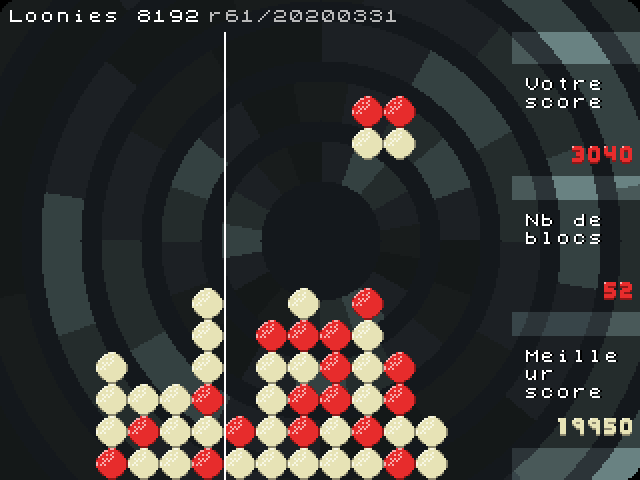 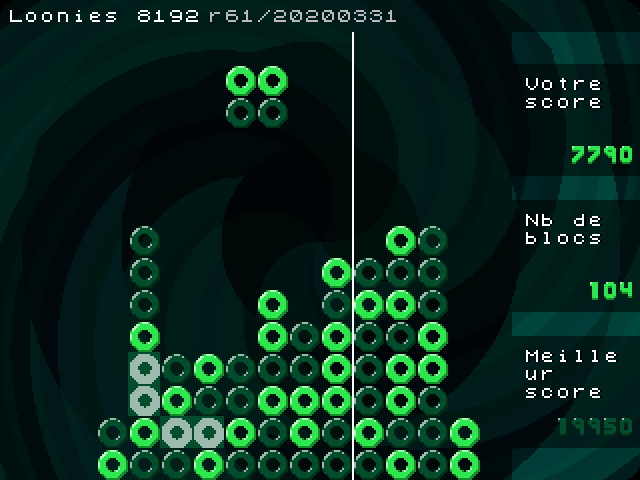 Updated DOS build attached (also available on the project website and on itch.io).

Cool. I will try it out tomorrow or soon anyway. Let's see if it still runs on the 386!

Link to the stream:

just a quick message to say I have tested the latest version(8R61) on 3 machines and it works great on all:

Thanks 😀 I guess the VGA card really helps in the 286. Glad you enjoy it 😀

And as root42 mentioned, the live stream was today and the recording is now available here:
https://youtu.be/e7vSSpXMv_w

A new version of the game is out, I have ported it to the GBA, and the DOS, 3DS and PSP ports have also been updated :)

Will you do the eReader (printable Dot-Codes) version as well?

No plans for eReader, as I don't have a printer or eReader for testing this.

BUT! r62 has just been released, which adds a PSX (PS1) port. The DOS, 3DS, PSP and GBA builds have also been updated. Updated DOS version attached to this thread, the other platforms can be downloaded from https://thp.itch.io/loonies-8192

Since last year, three new ports have been released:

First, the Android port, which is available on Google Play.

In addition to that, I had a NDS port ready for some time, but never bothered to implement audio support. It still doesn't have audio support, but it's released now -- the game fits nicely on the NDS screen.

And finally, the game has been ported to Win32 (well, I always had a SDL2 port for testing during development, but now it is scripted to cross-compile to Windows), so if for some reason, you can't run DOSBox, you could always give the native version a try (it uses SDL2 and mingw-w64, so might not support older versions of Windows).

As always, the updated DOS version is attached to this thread, the builds for other platforms can be downloaded from https://thp.itch.io/loonies-8192

A new version is available for DOS (the other ports will be updated in the next days).

In addition to the 16-bit Borland C++ build, there's now a 32-bit build using DJGPP. Depending on how it goes, if there will be future versions, it could be that Borland C++ (16-bit) is dropped, as it's a bit easier to maintain the 32-bit version with virtual memory, protected mode, and all (also, DJGPP has GCC 10.2, which of course is a lot more modern than Borland C++ 3 from the early 1990s). The 32-bit version for example has more background patterns (color cycling), because it has more RAM available at runtime to keep track of them all (without going to EMS or XMS or any of the other DOS hacks).

Most of the improvements are related to ports that use the touch screen (no mouse support in the DOS port yet), but the game has been updated graphically and some DOS-related VGA rendering issues have also been fixed as part of this update.

An enhanced port, "Loonies (2021)" with a new soundtrack and new artwork is now available on Itch.io: https://thp.itch.io/loonies 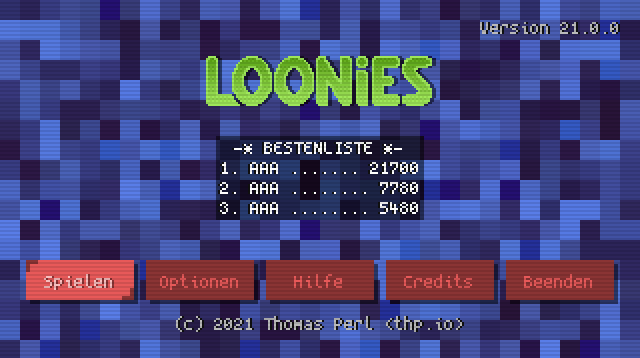 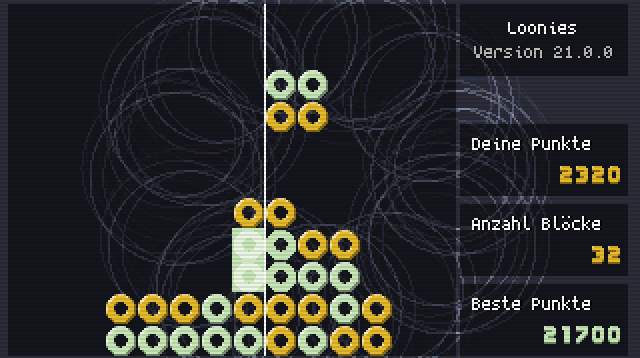 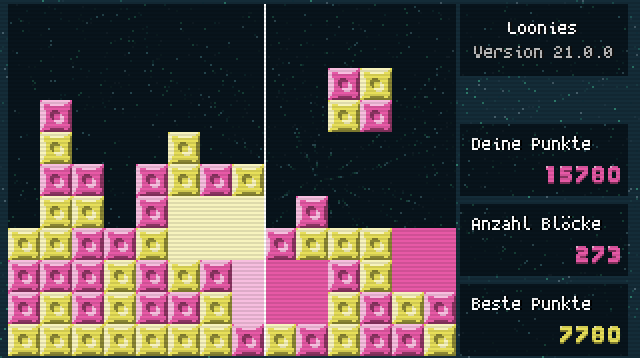