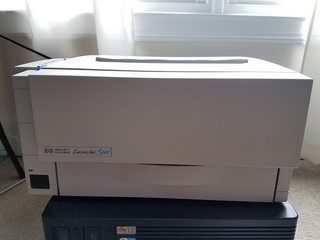 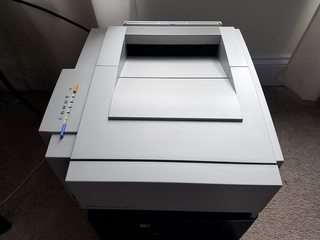 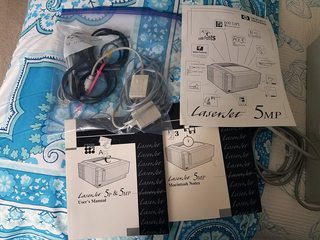 All the goodies it came with! 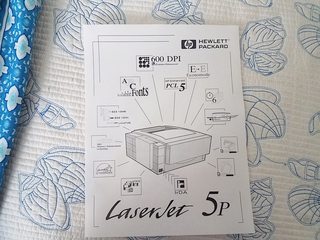 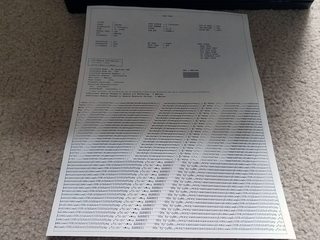 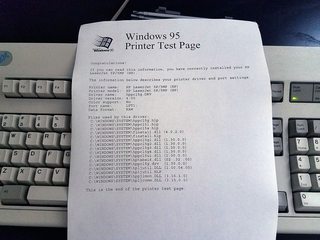 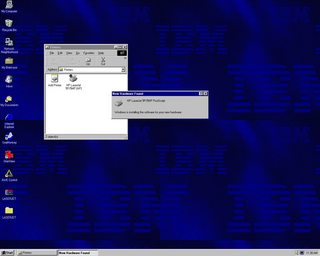 Installing it in 95. Works perfectly!

Reply 1 of 22, by Anonymous Coward

I bought a 6MP as second hand in the year 2000, which I used as my main printer until 2012. It was a very fine printer. From what I understand, the 5MP is very similar.

A lot of these older LaserJets are bulletproof workhorses. I had a LaserJet 5000 connected right up to about 2010, connected by Parallel-to-USB adapter. No idea how high the page count was, but it was still printing when I got rid of it, it just needed maintenance I couldn't afford to provide.

What maintenance do these things need?, because I'm really sick of inkjets.

If I recall correctly, it was due for toner and a full maintenance kit: https://www.theprinterpros.com/HP-LaserJet-50 … hp5000-mkit.htm

Mine was fairly heavily used before I got it, came in a batch of scrap my aunt grabbed from a business that closed down. I basically just used up the toner it had until it started streaking horribly Probably was sitting around 100,000 or more sheets printed at that point, and HP suggested the maintenance kit be done at 150,000 or so.

I was also a broke university student and replaced it with a cheap-o 60$ samsung laser - which has also been solid since then.

Changing the cartridge puts away developer, charge roller, drum and waste toner depot... so almost half-machine goes away with your cartridge. Apart from that, fuser assembly will last about 200000 prints before needing replacement (and when you buy a new maintenace kit it cames with new pick up rollers and transfer roller... so there it goes the other half of your machine). They are the two consumables that needs replacement.

Inkjets tends to get their jets clogged if they are not used in some time... I changed mine for a laser because I got clogged cartridges well before they got empty. The downside is that color laser are expensive, so I bought a monochrome MFP (about 100€).

Back in the 1990's HP had some good printers that had good support in MS-Windows.
I mainly use to use HP printers.
Today I use Epson Workforce and Samsung laser printers because they have good support for Apple and MS-Windows and UNIX and Linux.
And they are "inexpensive".
Those HP laser jets are real work horses. Especially the Network ones.
Does yours have built in networking or do you need an HP jet-direct adapter ?

I had a LaserJet 4ML that I bought from an electronics recycler back around 2002 or so. It worked good, but died after only a couple weeks (My fault though, accidentally dropped it while trying to move it on the far-too-tiny shelf it was sitting on & broke a gear). Went back and got a nearly-identical LaserJet 4L to replace it, and it lasted years without any trouble. Only reason I finally replaced the 4L was because I found a barely-used LaserJet 1012 for only $20 at a garage sale around 2008 or so, which was faster, higher resolution, and also much smaller physically, making it a perfect fit for my tight working quarters.

The 4L unfortunately got left behind at the old house when I moved, one of those "move-out deadline approaching, not enough time to take everything" situations. I still have the 1012, and last time I used it it still worked, but I don't use it anymore because the drivers don't work well on anything newer than Vista, or at all on anything newer than Win7.

Can you use virtual machines to run this hardware past its support date?

Old laserjets are pure PCL printers, so any driver that produces PCL output can be used (although some features like tray selection may behave strangely). I use Laserjet 2100 as my "generic" PCL driver (to test PCL printers without having to get a specific driver).

Also, HP Laserjet 5 has drivers for any Windows (both PCL and PS, if you have that option installed) so it will work out of the box.

No JetDirect here so no networking support. There's not much, if any, yellowing on the printer itself so that means it wasn't used much and was stored for a while. We used to have a 4L as well but I think my parents gave it away many moons ago. Just can't believe the sub-5,000 page count. It's really something else.

The drum and toner are one unit so that's good to know.

I know someone who bought a Laserjet 6MP back in the 90s and still uses it to this very day. It was hooked up to an AppleTalk home network that ran on telephone wire using those PhoneNet adapters until they replaced the old Macs with modern PCs on an Ethernet network - I then stuck a D-Link parallel print server on the back, maxed out the onboard RAM and it happily chugs along like the day it came out of the box. Buy It For Life indeed. 😀

Bought 16MB RAM for cheap on eBay. Total would be 19MB... don't really think I needed it but it's cool to see RAM slots on a printer.

What is the advantage of increasing the memory? Faster printing?

With more memory, you can download more fonts and graphics to the printer or process more complex documents.

Fonts downloading is not usual (because most programs print text as graphics), graphics downloading is almost useless for desktop users and I've only seen printers that got out of memory when printing VERY complex PS documents (or in some printers with 512Kb installed).

With a LJ5, I wouldn't go beyond 4Mb (and I think that's too much), I guess buying a PS or network option would be a better choice.

With more memory, you can download more fonts and graphics to the printer or process more complex documents.

This. But contrary to your experience I did see the need for RAM with more mundane stuff. The LaserJet 6MP I mentioned earlier started printing more and more 'out of PCL memory' messages when sent some pretty simple PDFs (text documents, forms) until pretty much every other PDF sent to the printer would not print. Sure you could configure Adobe Reader to print as bitmap as a workaround, but this made file sizes blow up (therefore decreasing speed) and print quality decrease noticeably. The printer only had the stock 3 MB, and much like oeuvre I saw that RAM is cheap on eBay, so I maxed it out (to 36 MB I believe) and it has worked fine ever since. My theory is that much like the Web (and its modern bloat) document complexity has risen over the years so that something as simple as a tax form could choke an older PCL/PS printer that would've been printing engineering drawings in its heyday.

Oh, yes. PDFs. That files that contains all the downsides of a full feature PS document but without any advantage. I don't know how are they translated into PCL, but surely produces heavy documents. The key is how much elements have a PDF and how are they mixed. A PDF may contain bitmaps, vectors, font definitions and plain text, with colours and transparencies and so on. As with 3D games, if your PDF has many elements that overlaps and modify other elements, it will take too much power to process, and the printer will need more memory.

A long time ago I saw a document that eat up all memory in a copier. It was a single A3 map (full of vectors and shades) and it eat up 128Mb of memory. But I guess that a full colour high resolution map was not meant for a monochrome printer.

You have a point, but if you made that PDFs you should reconsider how are you producing them. On the other hand, there are a few steps that can avoid that out of memory messages...

- In some printers/drivers/programs, there were options that let you send the file page by page (a page is not sent to the printer before the last one has been printed). If your documents are too big, this may avoid the document to fill the memory before a page is rasterized.

- Did you set correctly your memory options in the driver? That was not autodetected in earlier printers, so if your printer have 512Kb and the driver thinks it have 1Mb it will send data until it overrun all the available memory.

- Are you using features like overlays or watermarks? That features are sent as two pages (one the overlay, other the actual page) and mixed into the printer, so they can eat up memory (not a very used feature, but...). The same applies to fonts. Even if they are not used, they're eating up memory.

- Printing as bitmaps. This option may be set in your software or your driver (although I don't know if this is a feature only present in HP drivers or the generic Windows drivers also have it. The entire page is processed in the computer, so the printer don't have to cook it and take less memory to print it. Data sent to the printer is bigger, quality may be reduced, but the document can be printed.

- Lowering the printer resolution: Setting the driver to print as 300dpi instead of 600 will surely lower the quality but take much less memory.

BTW, I see that your printer already has PS installed. Another option could be trying to print the same document using another (the PS) driver. It shouldn't work, but sometimes it does.

That's interesting. Are there 'test' PDFs that can be used for testing printer capabilities? How 'heavy' can these files get?