I've had a Compaq Deskpro EN-SFF lying about for quite a while now. Lately I decided to use it as a daily retro driver PC, so I gave it some upgrades. The CPU at 1GHz Coppermine is good enough, though I am debating replacing it with a Tualatin P3 1.2GHz anyway. I upgraded the RAM from 2x128MB sticks to 3x128MB (the system would stubbornly not POST with any of the 256MB sticks I had, and of the dozen 128MB sticks only two of them worked. It's a quirky board, but more on that later.) I also replaced the 20GB Seagate HDD with an 80GB WD one, added a Matrox G450 PCI, a Terratec i512 Digial and a VIA USB 2.0 PCI card. Here is the weirdness that ensued.

1. I booted the PC using the onboard i752 video graphics adapter and everything seemed to be working aside from the 24x CD-ROM on the thing, which was dead. So I removed the drive and replaced it with an LG 16x DVD-ROM.

2. I booted the PC using the Matrox G450 PCI (which, to my knowledge, was working fully well the last time I used it, a year ago) but regardless of VGA or DVI out, I would get image on the screen for about 5-10 seconds, after which I would get either nothing, or vertical bands of static color. I chalked this up to the card dying (I have yet to test it elsewhere but I will, tonight) and replaced it with a Radeon 9250 PCI.

3. I booted up the PC using the Radeon 9250 PCI, and the system stopped detecting the DVD-RW. Removing and replacing the IDE cables got the drive detected again (although not reliably) but eventually I got it apparently working, and proceeded to install Windows 98. After the initial boot and during the copying of system drivers, something odd happened: the drive got stuck at maximum spin speed but the activity light was gone and the system locked up. I rebooted and.. the drive was no longer detected.

4. I binned the DVD-RW and replaced it with another one of the same make and model that I knew was working. Initially it worked just fine, but when trying to install Windows 98 I started getting weird, weird things happening. The first is that when using the Windows 98SE FDISK, I can't seem to access or manipulate beyond 10GB of the 80GB HDD I have in there. Even with LBA support on, the maximum total size of partitions I can create was 10GB. I chalked this up to Windows 98SE weirdness (but I know this is not the case, I partitioned and installed Windows 98SE on larger disks) so I booted GParted. The graphic boot menu had slight weird shaky/blurry corruption but the ISO booted to desktop at 1920x1080 resolution just fine, and I could partition the drive just fine into 4/62/8 GB partitions.

5. I booted back into Windows 98SE install, this time it insisted on checking the drives and complained about not being able to read the last cluster of Drive D (it completely ignored Drive E, which was formatted to NTFS in preperation for a Windows 2K install later) and proceeded to surface scan it.. All 6GB of it?? It was obviously not seeing the drive right so I interrupted the scan and the install terminated. I rebooted to command prompt and a directory listing of Drive D returned a whopping 62 MB (not GB) of free space.. So I fired up FDISK and deleted the Logical partition completely, deciding to create the other partitions later.

6. I also formatted Drive C with a /q switch and started setp with the /is setup to skip the scandisk procedures. At the Boot Disk Creation screen, attempting to skip the process again resulted in a soft reboot. Attempting to create the Boot Disk resulted in an error about not being able to access the first sector (or sector zero or some such.) I went "Hmm", rebooted into BIOS and tried the Save to Floppy Disk option and that also gave me an error about not detecting a disk or disk being faulty. This is not true, so I pulled it apart, reconnected the floppy ribbon cable, attempted the BIOS procedure again, and it worked. I could even boot from the floppy just fine.

7. I tried to reinstall Windows 98SE, but the boot disk issue persisted. Now, when the PC locks up I get weird crawling white dots at the rightmost edge of the screen and the corruption persists across the screen after a soft reboot, but they went away after a cold reset. I decide something on the PCI bus may be responsible for all my issues including the one with the G450, and I pull out the most likely culprit, the VIA card. I also remove the 128MB RAM stick I have in there in the case it's messing with stability. I reboot, and although the graphics are fine now the DVD-ROM is not detected. Again.

8. I reason that I may be having multiple issues, so I pull out the DVD-ROM IDE ribbon and replace it with a known working one. And the DVD is recognized, the boot is clean, I smile smugly to myself, close the case up, reboot and the DVD-ROM has again disappeared. Now about to tear my hair out, I try to see if the controller or the cable is at fault, so I connect the hard drive with its own chain to the Secondary IDE controller, and unlike the DVD-ROM it's immediately recognized. I use the Hard Drive's working IDE ribbon to connect the DVD-ROM to the motherboard, and it's again not recognized. At this point I'm getting really frustrated so I put the 128MB ram stick back in and assemble the DVD-ROM and Hard Drive with their original cables, reboot, still no DVD-ROm detected. I sit and think for a moment..

9. I go to HP's website, download the latest BIOS Rompaq (3.14A vs 2.12 on the system), I boot to it from the floppy drive (pretty brave of me considering all the IDE issues I've been having, I know) and flash the BIOS. Everything goes butter smooth, I power down, reboot, and the DVD-ROM is detected.

At this point it's 3 o'clock in the morning and I go to sleep. I did not try a Windows 98SE install after all this, neither did I try the G450 in the system again. I'm almost dreading that the fix I think I found is still not a fix, but I will find out tonight I guess.

Anyway, I thought I would share this weird experience. Your inputs and insights on the matter would be very very welcome.

Have you tried disabling the onboard IDE and using a separate controller card?

That was on my mind. See, there is this video I came across on youtube while googling a fix: https://www.youtube.com/watch?v=Ti9tL1SKLRM

Same PC, same setup but the guy is using a PCI Promise Ultra ATA100 IDE controller.. Why I do not know but there could be a common issue? Dont speak no Russian 🙁

I'm considering grabbing one of these:

I bought the card. I trust my Russian friend knew what he was doing..

I've booted the Deskpro after the BIOS update and had success with installing Windows 98SE.. until the 'Detecting PnP Devices bit', where it just flat out locked up and after a hard reset the DVD-ROM was again not detected.

At this point, I have a few last ideas to try:

1. Both DVD-RW drives I've tried are basically the same make and model from 2006, so it just might be a weird incompatibility with the unit and i815E's IDE controller; I will try a DVD/CD-RW combo drive from 2003 tonight to see if that makes anything better.
2. I have a PCI ATA controller on the way, so if that fails, I can just slap that card in and disable the onboard IDE. Fingers crossed that will result in stability as it did for our Russian friend above.
3. If even that fails, I may have a stick of faulty RAM in there so I will remove ALL THREE sticks of RAM and I will try the process with just one stick at a time with all three and see if that fixes anything.
4. Even if all the above resolves nothing, I have not lost hope. The soundcard on the PCI bus may actually be responsible for all the weirdness going on, something I haven't considered before. So I will try bootig the system and installing Windows without the Terrated i512 sound card and see if that works.

Other than this? I have no other idea to turn to.

My first inclination when seeing these kinds of problems on an old system is to try using a different power supply.

My first inclination when seeing these kinds of problems on an old system is to try using a different power supply.

Crossed my mind, of course, but it's a non standard form factor case/psu with a proprietary connector: 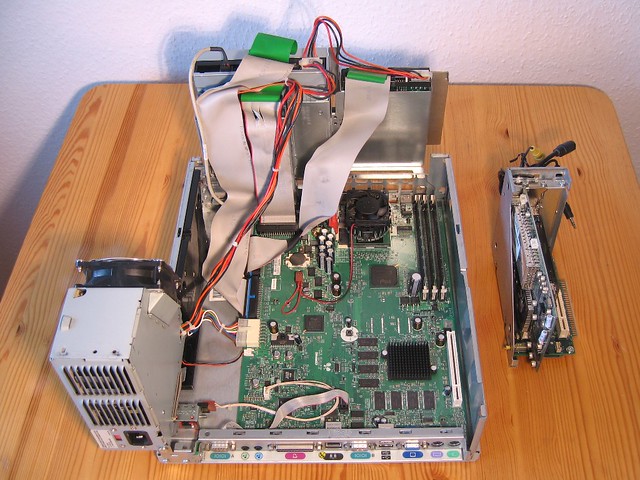 Photo of the system by another Vogoner, not mine. My board does not have the TNT2 Pro onboard VGA.

So if the PSU is busted, I will probably just shelf the thing until I come across another system being sold as junk..

Also thinking the power supply, Had a few of these and were pretty solid, but that was when they were 10-15 years old.
and the fact that its HDD, CD/DVD's, Video. its not like its specific to 1 area of the system 🙁

Add another one suspecting the PSU. You might be able to repair it if you open it up and see if any capacitors are failing.

Add another one suspecting the PSU. You might be able to repair it if you open it up and see if any capacitors are failing.

I'd do the same. They are built like a tank though...

Ok, ok.. I will open up the PSU and post photos tonight. 😀

I know I said I would open it up a week ago but I only got around to it today.

The insides of the PSU look fine to me?

And I can't really see anything wrong on the board either?

My next attempt will be to flash the PCI RAID controller to the regular ATAPI controller firmware and see if I can get everything working stable that way.

PSU looks fine. Please check your multi and core voltage, then test with only onboard devices (in case you've got weird resource / BIOS issues).