It had some battery corrosion, but it cleaned well with white vinegar. Now I'm trying to bring back that beast to life, and there are signs of hope !
after properly setting the jumpers and briging back some cache, the CPU heats up and my POST card displays something. It begins with "06" and quickly change to "0d". At this moment it stops ...

RAM doesn't seem to matter because whatever I do (even empty), this stays the same.

What's weird is that whenever I insert a VLB video card, the mobo acts dead-like ...

there might be a spot where something needs to be fixed, but there's something weird going on there, let me show you

The photo is not very clear, so I made a schematic :

this is how the traces go, 4 enter the corroded area and 3 come out ... I'm not sure why, one of them just seem to stop, there's no via there. What I'm totally unsure of is which of the two traces in the middle is the one that continues and which is the one that stops. So "1" is the first possibility of what's going on and "2" is the second possibility.

The previous owner attempted to fix this and have made a big hole there .. (maybe he ripped with a screwdriver ?)

Anybody has this mobo so I can compare ?

Edit: mobo seems identical to this one : 80486 BIOS image collection

I have the same board, did you get yours from that Ukrainian listing which was old warehouse stock?

this is the fix I had to do on mine for battery corrosion.
You seem to have a tantalum cap in the place where I got the electrolytic cap. I removed this cap to fix the traces which go under it.

have a look on my pcitures one is with cap off and after traces reflowed with cap on. I suggest you remove anything thats on top of the corroded traces, use fine sandpaper or some tool to scrape off the solder mask + corrosion, vinegar and reflow or jump wire the traces 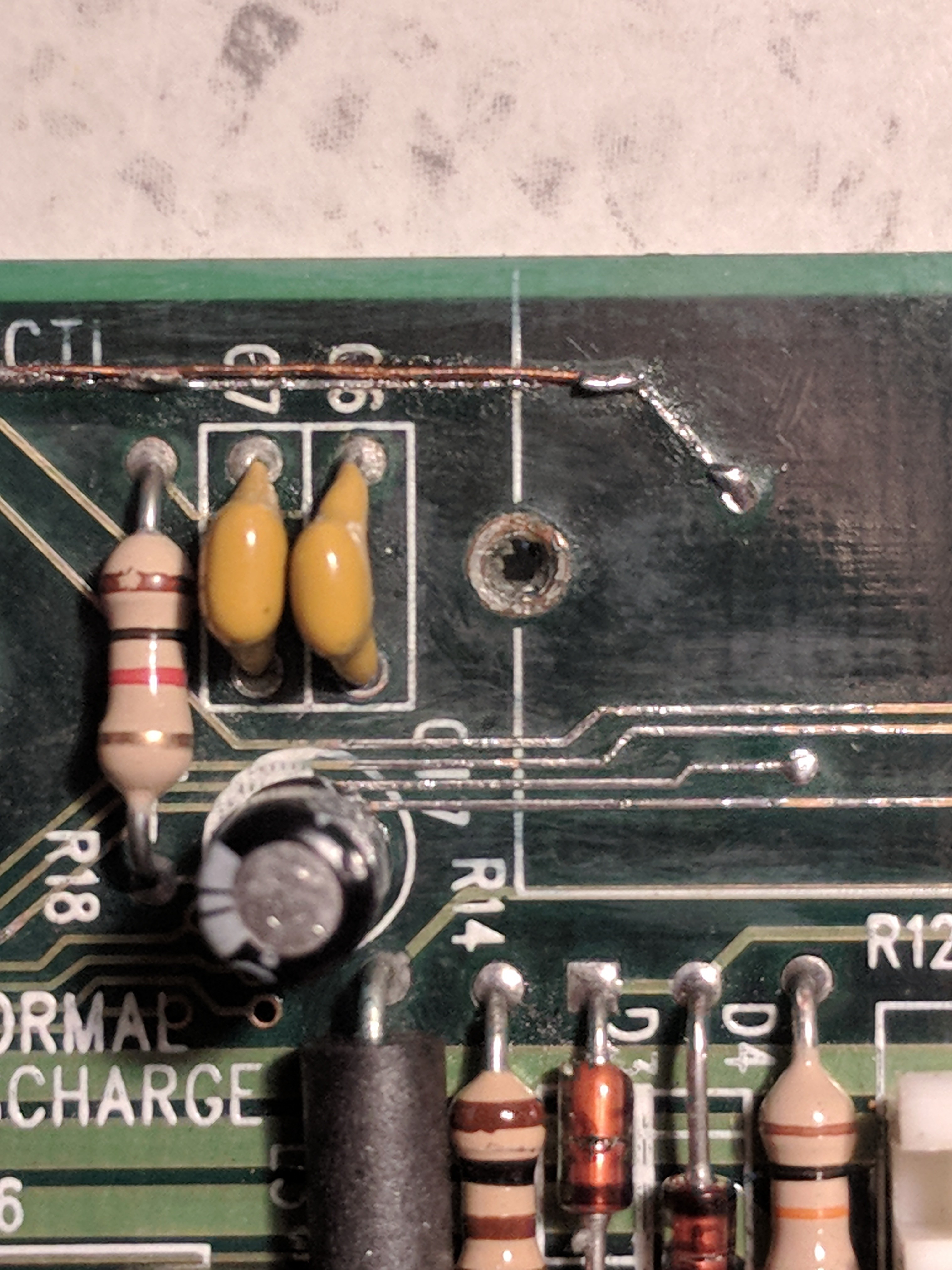 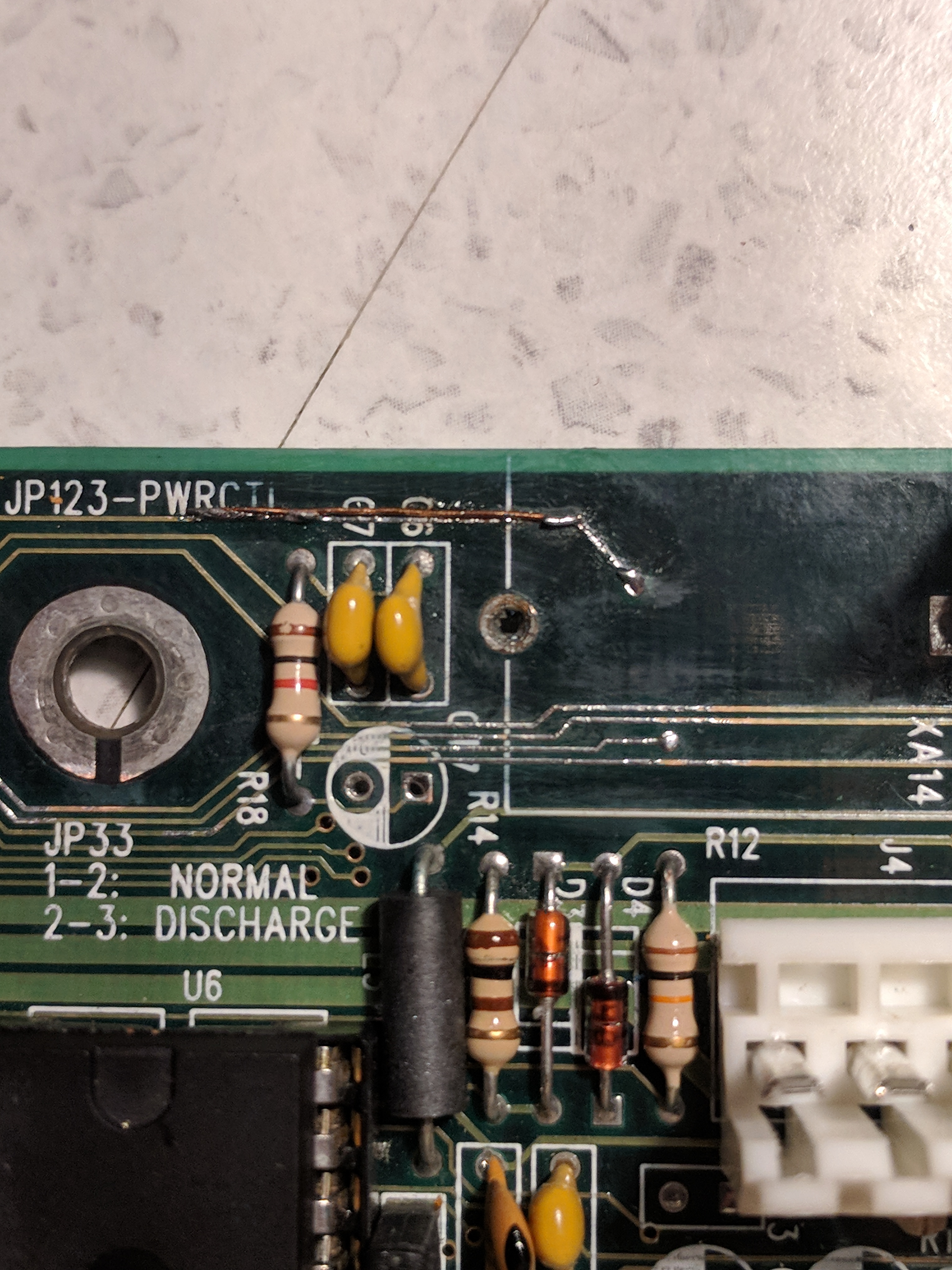 Well I've found that via, actually the trace is still connected to it despite looking terrible in that spot (the previous owner stabbed the board exactly in that spot) it seems the two traces next to it are cut though, and since they all look terrible, I'm gonna fix them all. I've already cleaned the corrosion, the traces on that board are very green, but it is normal. In the end, it's the previous owner who harmed the board the most I think x)

I can't touch that board currently, but I'll be back to it this weekend. When I'm back I'll try to clean the spot the best I can and I'll fix these traces. 2 of them are definitely cut and cannot be repaired by reflowing them, and one can, but it's still tricky, and they look bad anyways, so the best is to replace them.

By the way, it's not from a Ukrainian listing, I bought that from somebody in my country ^^

It came with other board's that will probably show up there later (the previous owner did terrible attempts to fix the boards and ended up salvaging them. Some miss ram slots, holders for simms, the moving part of the socket ... And the solder joints are absolutely HORRIBLE (imagine somebody attempting to remove a ram slot with an iron that's too hot with solder wick ... Yeah that kind of nasty job ... some joints that were round now have the shape on tiny potatoes). There are also blobs of solder and even a transistor for 3.3v that's attached with wires 🤣

ouch sounds like the original corrosion repair would of been a breeze compared to the surprise this guy left you. Alot of the time the corrosion looks really bad and these traces were pretty green stock, once I sand papered them they all actually passed continuity test on the multimeter but adding solder felt like the right thing to do anyway.... totally different story if the trace is cut, you sound like you know what you are doing so good luck let us know the results

I think the POST code of 0D has something to do with the keyboard controller. It's socketed very close to the battery area, so there could be some damage due to corrosion.

Well it depends of which AMI bios there is on there http://www.bioscentral.com/postcodes/amibios.htm
It can also mean something is refreshed correctly. The code 06 that is displayed first makes sense though as there is no video card connexted.

Ok, so I took a wire and took out the smallest metal wire possible and I soldered that over the broken traces : 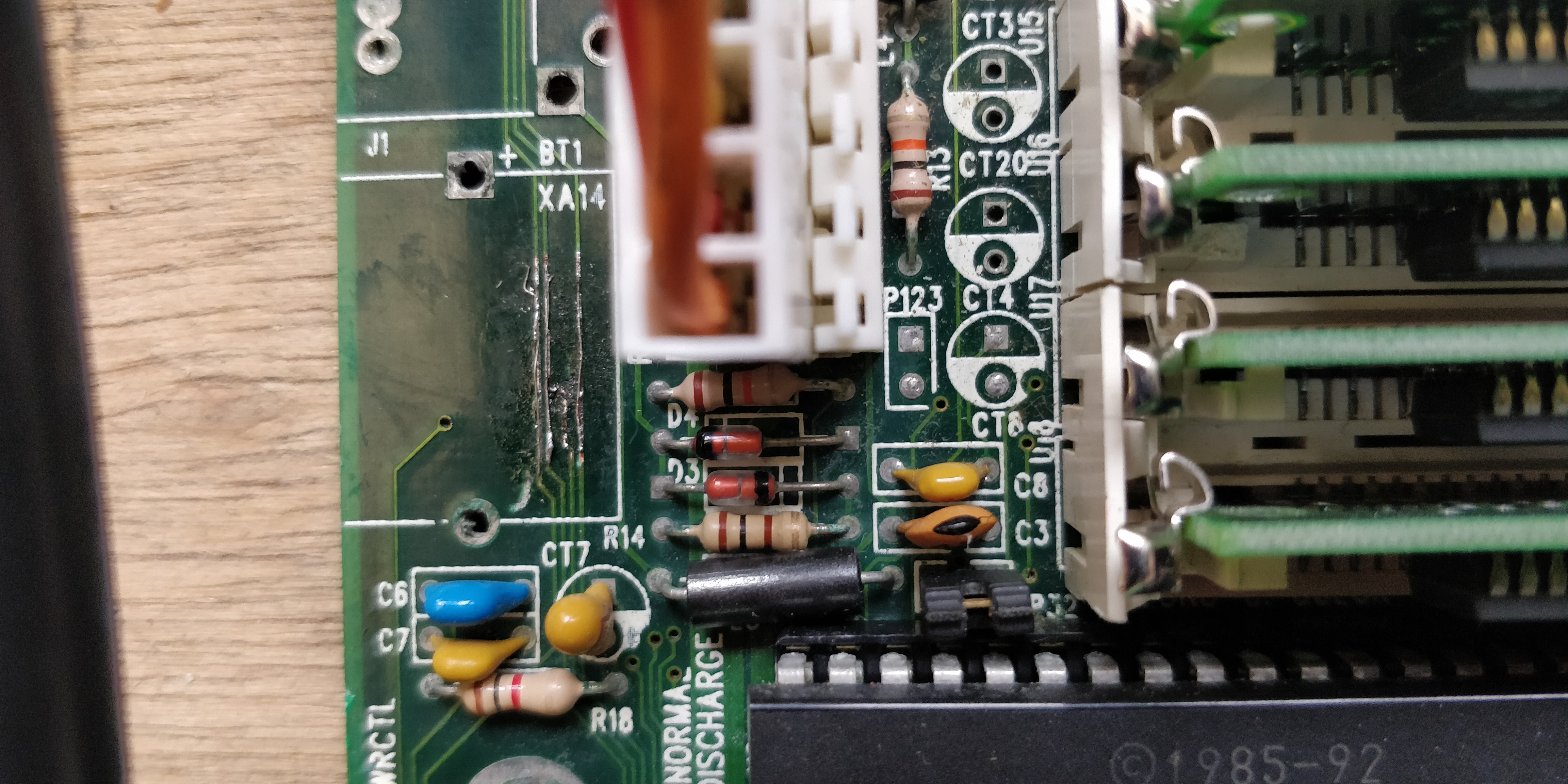 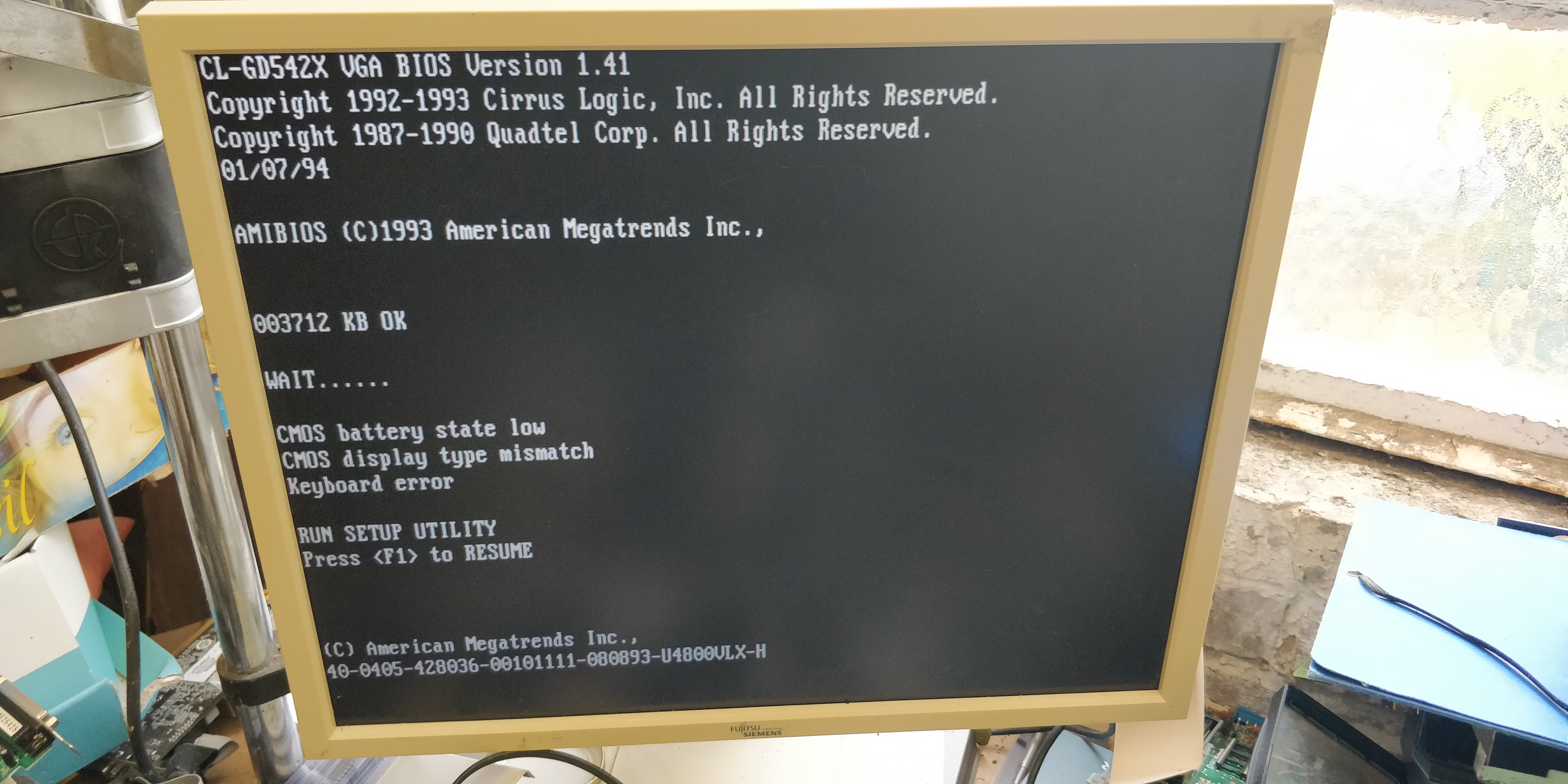 However Murphy must like me, one of these tantalum caps just failed, so I removed all of them here -_- 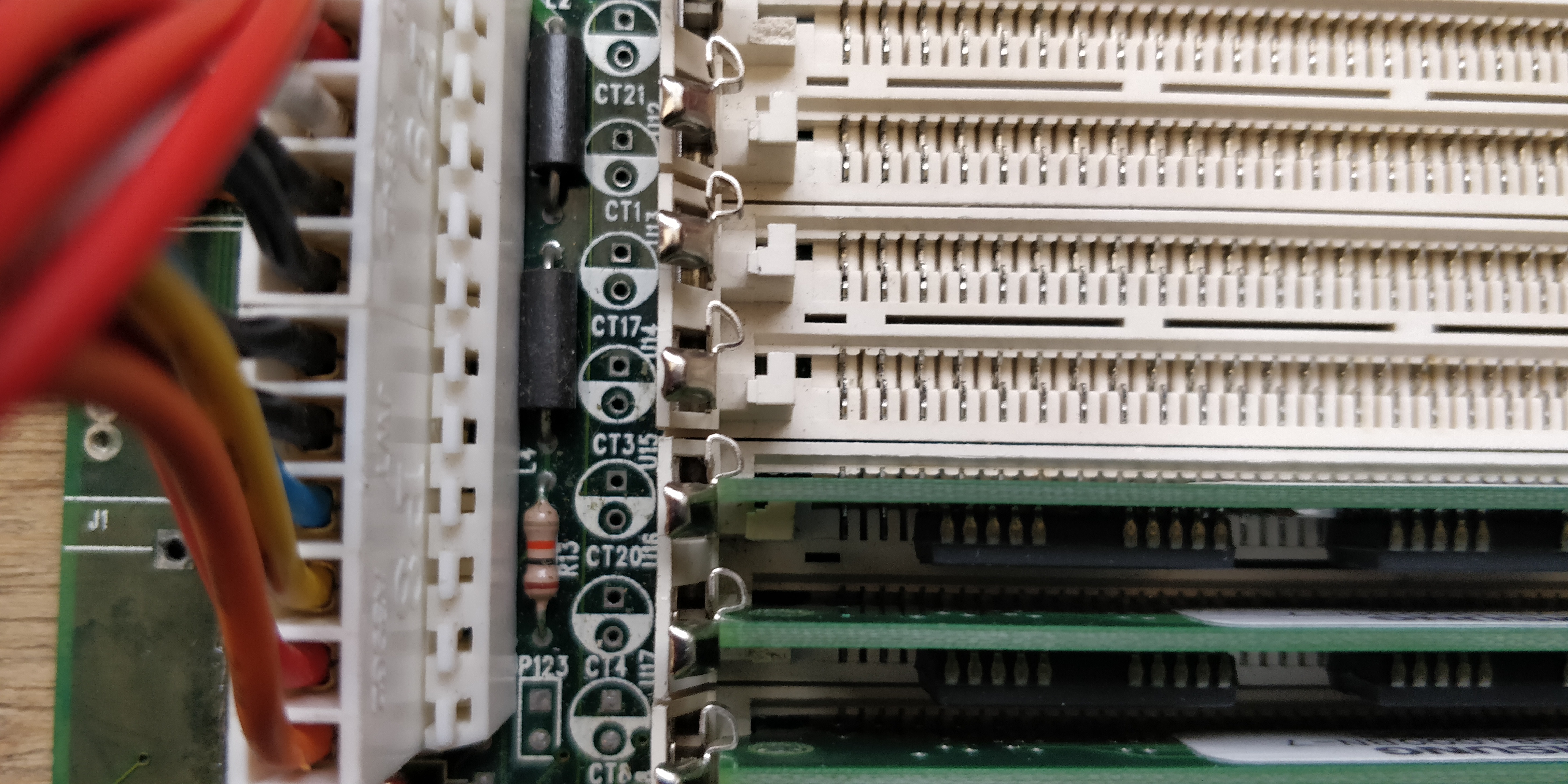 Seriously, it was fine yesterday 🤣

Anyways, the board is fixed now 😀

Recently my friend gave me nearly identical motherboard. The only difference is that mine is v2.2 instead of v2.1.
It also had damaged VARTA battery, which I removed. There were signs of corrosion, but traces weren't broken. Just to be sure i scraped solder mask and tinned them.
Unfortunately there was no BIOS chip in the socket, so I programmed spare 27C512 chip with BIOS from the other board that you described as looking similar to yours
Unfortunately it turned out to be only a partial success...
1. Motherboard doesn't start after supplying power, VGA card + monitor and keyboard. Screen remains black, there is no POST message.
2. Diagnostic ISA card shows proper voltages and signals. There is some activity after power up, which stops at code 0x22. Then board resets itself and entire cycle repeats.
https://www.youtube.com/watch?v=KAijEQd2K2I
3. RESET signal is being generated after shorting pins.

I think BIOS from 486-UNICHIP 486 WB 4407 may not be fully compatible with GMB-486UNP, despite similar appearance of these two boards.

Could you make an image of your BIOS and post it here or send it to me? I'd like to test that hypothesis and make this board working again. 😀

Though code 0x22 seems to be related to the RAM. Are you sure the simm sockets are perfectly clean ? Do you use 4 identical RAM sticks ?

By the way that board of mine now have a new problem I don't understand : the L1 cache (so to be clear, the CPU cache) doesn't work anymore. For whatever reason, no matter what I try (even the turbo button) the L1 cache still doesn't work ...
Apparently though it's still enabled somehow : 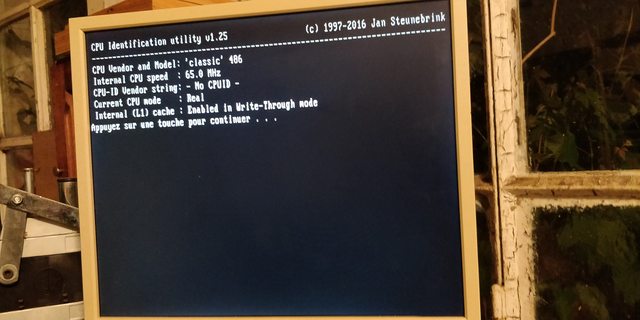 Both speedsys and cachechk are confirming me the L1 cache is not working : 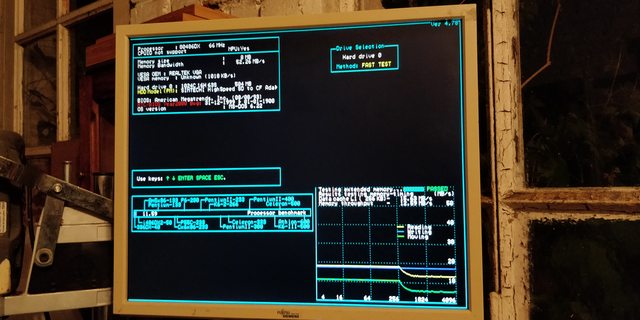 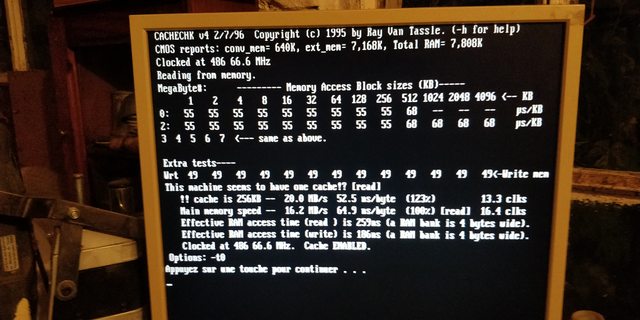 BIOS settings are properly set too : 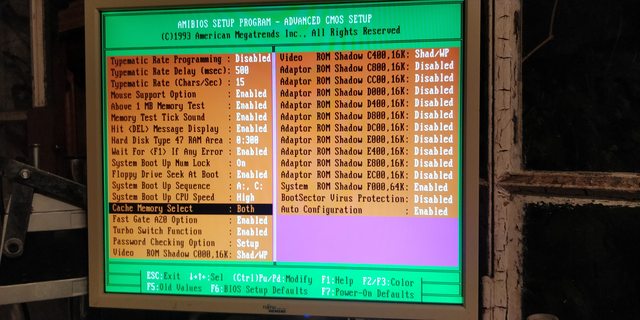 Now I still haven't put new caps (and actually I forgot what their values were ...) Do you think the chipset could have been damaged ?

Thanks! I will test it. I hope v2.2 is compatible with v2.1 BIOS.
By the way, I was able to google few photos of v2.2 version of this board with BIOS still in socket. The label on that chip clearly states "Award Software". It i kind of strange, because your BIOS is AMI and manual for v.3.01 also mentions AMIBIOS...

Though code 0x22 seems to be related to the RAM. Are you sure the simm sockets are perfectly clean ? Do you use 4 identical RAM sticks ?

Now I still haven't put new caps (and actually I forgot what their values were ...) Do you think the chipset could have been damaged ?

I my opinion chipset damage due to lacking capacitors is rather unlikely. However bad power filtering may cause various instabilities, maybe this is simply one of them...

Well the thing is, L2 cache have never worked since and that's the only thing that doesn't work. The board is rock stable otherwise.

It seems turbo is permanently set to slow mode, that would explain why the CPU cache is still enabled and the turbo button doesn't change anything (actually the "button" is just a jumper that I set in one way or the other), neither the speed or ram speed. Every benchmark will perform the same no matter in which way the turbo is set.

I may inspect any other tantalum caps that may be on board, perhaps there's another one being bad that drives the turbo low ? 🤔

By the way, can you give me the values of the caps nearby the PSU connector ? 😁

By the way, can you give me the values of the caps nearby the PSU connector ? 😁

The view is obscured by the PSU connector and memory slots. I has to slide a little mirror beneath them to be able to even see marked sides . 😀
I still can't place my phone anywhere closer go get better image. Maybe you will be able do decipher the markings anyway...

Unfortunately, your BIOS still doesn't work with my board. Now it stops at code 0x13, but at least there is no reset loop.
I wonder if there is some other malfunction (and in that case - if it can be repaired) or if v2.2 board had vastly different BIOS. It was Award after all...

Unfortunately I can't read that 🙁

I think more light would help there ... (or if you can read them irl and write where they go, that'd be enough ^^)

For a "AMI color" BIOS, code 0x13 is "Chipset/memory initialization" apparently. Can you post a picture of your entire board to see if one can see anything that may be wrong ?

The BIOS on yours being AWARD instead of AMI isn't a problem. Some boards back then used to have two or even three different BIOSes available.
Is the CPU properly configured ?

Now I think I've found something.
By probing with my multimeter, I noticed that these two pins are bridged somehow

I have no idea how they got bridged, but I'm sure it's the cause of the problem.

I've checked the tantalum caps in the area and none seemed to be shorted ...
Does anyone know what could be wrong there ?

I found an Award bios for the 486UNP

Very good !
Where did you find that ?

There is every chance I downloaded that about 15-20 years ago. Like I said, a lot is on elhvb.com but a lot still needs indexing and uploading...

@Atlantis: thanks for posting the bios string page so we can confirm this Award bios is indeed the right one. And congrats on reviving the board.