Also, I think I'm going to buy the chip that's missing from mine as, according to the datasheet, it seems to play an important role in the voltage regulation domain. But there seem to be many version of it, and I'm not sure which one should-I buy. And I don't know much in electronics further than "this capacitor is bad, replace it; this trace is dead, fix it; this resistor is missing, replace it; etc"

You need to be on OS/2 and IBM LAN system.

ok, well that pin is covered then in my previous posts, the blue line has continuity to first and second solder points from the edge of the board which "chip" are you talking about?

oh yes I went back to page 1 and see you do not have it, this is strange. Do the pads have any sign of desoldering or its clean from factory? anyway I also don't know what the function of that chip is

LP2951 is a voltage regulator. Chances are it was used to set the voltage for the power transistor in emitter-follower mode. It would be much more precise than doing it with a simple resistor divider like some mobos had.

There seem to be several versions of that chip though, and so I'm not sure which one I should get.

What I'm planning to do now is to reproduce the same voltage regulation circuit as you have, since mine, if it ever existed, have been heavily modified it seems.

I was reading in the thread about solder pads that in factory sometimes they make room for few different resistor sizes and types incase supplier runs out of one. Maybye its the same with the voltage chip you are missing. They made the function in another way and part but the pads are there from factory.

I guess if the voltages inside the cpu socket are ok with the corresponding pins then its working?

Anyway here is a high res pic of my board as a reference, see what is missing or extra 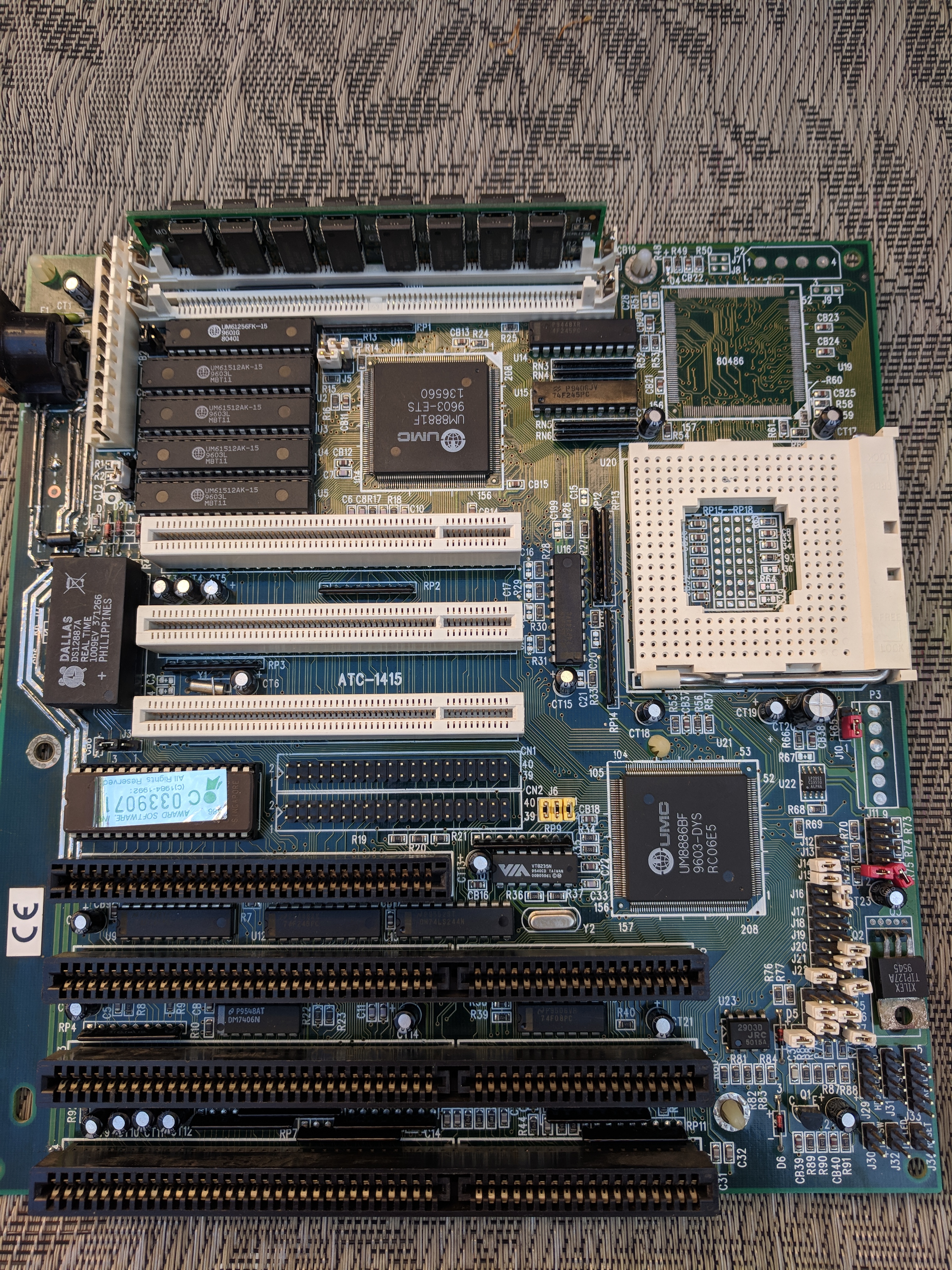 Well the voltages in the CPU socket were NEVER right (except 5v 🤣). Now that I have removed the bridge and swapped the regulator, I can't change the voltage at all, it stays to 5V, so something else is wrong here.

You need to be on OS/2 and IBM LAN system.

Hey it's been a while !
I haven't done much recently, I'm waiting for DALLAS chips to arrive, and I should also order that missing resistor/chip for the ATC1415.

But today I was working on cleaning one of my working ISA I/O card because it's quite rusty and full of dirt (almost like the card had some mud on it or something like that) so I had to remove the parallel/game ports using the desoldering iron.

And since the iron was hot I thought "why not trying to desolder some 30 pin RAM slots from one of the donnor board ?" (I was kinda lazy to do that because that donnor board is actually quite resilient to "give" its components, or at least I thought it was because this time I had no real problem - maybe I'm just getting better at desoldering things with that desoldering iron ? - but also because it's a bit boring actually ^^). Anyways, so I successfully removed four 30 pin RAM slots from a dead 486 motherboard, and I brought them to the ABIT FU3 (the 386DX motherboard)

It still looks nasty, but what can I do now ?

And here's the front

I chose to not remove the other four RAM slots from this board even though they look a bit rough : too much work for too little (they work very well and the board will always look rough even with new ram slots, plus it's not like they had oxydation that could become worse after a while)

I love this kind of threads! 😉
kudos for you!

So I've removed the old rusty chip from the ATC1415 and I emptied the holes (that was much tougher than I expected ! The oxydation was really annoying to deal with)

And now the new socket ^^

After a short test, it works flawlessly. Before that, just reseting the board was enough to lose the settings (I'm not even sure the old chip was really working to be honest. The previous owner tried to do something with it as I saw some flux on pins in a corner, but he stopped at some point).

Now let's order the CMS resistor and that missing chip.

Edit : So I ordered this one. Quite expensive and I only need one, but this seem to be exactly the same (same brand and etc, just 4 years newer)

excellent work, good to see this board receiving some good care finally

When the CPU voltage regulation will be fixed, I'll start to remove each expansion slot as they're ALL oxyded and I'll replace all of them ... That's going to be a fun moment x)
But this should let me make sure everything's fine underneath these.

Here we are again ! So I've received the resistor and the chip and I've soldered them on the board.

Now I start to suspect the capacitors (the previous owner has definitely done something with them since the solder on their legs isn't looking like proffesionally soldered). Could bad/wrongly sized caps prevent the voltages from being correct ? If so, can I have the original capacitors specs ? (I don't really trust those on my board, maybe they've been added by the previous owner).

are you getting 1.8-2V at the vrm or the actual CPU socket?

on my board I always get crap readings on the vrm 1.5 ~ 1.8v but when measure in the actual socket its correct

I see, I don't know if thats right behaviour but on my atc1415 I was getting correct 5v and 3.4v in the socket without the cpu. I thought it was the set of the resistors near the voltage pins that regulate the voltage to the socket