Perhaps this is why the socket was broken ? (But that's not the same board I'm taking about in today's post, this is the CH471A)

Perhaps this is why the socket was broken ?

The bottom part looked good though 😒

I don't think the previous owner is the original owner of all of this. Probably someone that gathered several parts or bought a lot of broken boards, and attempted (and failed) to fix them.)

On the other hand, the TK-82C491/GP-4N-D28B1(the last board with the burned socket that still works) aka "SNB-022" (that's what the BIOS says) is from another lot, which was composed of two computers. One complete system with a pcchips m912 and an uncomplete system containing that broken board.

So yeah, the SNB-022 is pretty much fixed now, I just need to get some power source for the RTC (super capacitor, battery, whatever ...), swap the fake cache chips and maybe find some transistor to lower the voltage and install faster CPUs. The socket looks horrible, but heh it works, and it's way too much work to do, and that's only for aesthetics as you can't see much of the burn if the CPU is installed.

Moving on back to the Abit FU3 (386DX motherboard with two missing simms slot).

The other day I removed the two corroded chips near the battery slot, and I also removed the keyboard controller's socket to treat the corrosion.

The discoloration is just the flux that reacted with the corrosion (there's no discoloration on the KBC part for example). Sadly, I have damaged some vias (corroded solder joints are hard to remove ...), but they still make contact ...

As you may see, there's also a broken resistor over the 7407 spot, but hey it still works and it's none of my concerns for now 😁

So I checked for continuity and they all traces still work. So I cleaned all this mess some more and put new sockets and I reinserted the chips in there.

Then I tested the board and ... nothing has changed.

So I guess the corrosion didn't create that issue (although it was probably going to make things even worse !)

Also, I plugged a PC-Speaker in there, and it makes three long beeps with long pauses, then it stops and then it does this again, then stops ... forever.

I guess this is RAM issue. Just to make sure, I installed cache and made sure everything was properly configured, it didn't change, then I sprayed some contact cleaner in the RAM sockets, but it that doesn't work, I think I'm going to remove all the SIMM slots and put some other slots I will salvage from another motherboard.

I wonder if some of the traces of the SIMM slots aren't just common to all of them, and *maybe* the last slots are where the traces are supposed to go to the chipset. And looking how poor the desoldering job was made there, this is highly possible that some traces are broken. So perhaps replacing all the simm slots and making sure that all the traces are working will fix the board ?
😁

ha ha I know the feeling, the mission has been accepted and you already went this far now have to keep going and test every theory out

Well, I haven't touched the 386 yet, but I've received the correct voltage regulator for the ATC1415, so I tried it.

Unfortunately, it still didn't work ... (5V going into the CPU)

First I noticed that the via for the first pin on the left of the VRM (the one right next to "Q2" written on the PCB) don't seem to lead anywhere anymore (like I said, the holes were damaged by the previous action, probably because they received too much heat from the previous owner), so I tried to re-wire that (not sure if I rewired it to the correct spot though ...)

I took a look at treeman's motherboard, and it seems R67 should be unpopulated, but R66 should be populated. But I have no idea what value is needed there (and it's probably not 0 Ohm as it brought +5V to the entire circuit. Now that I've removed these, when I set the jumpers for something less than +5V I have 0V on the CPU socket)

Can any of you give me the value of that R66 resistor ? It's right here

(there is also some IC next to that resistor on treeman's motherboard, but mine has none there, and it doesn't look like there was one previously)

I always thought that any 486 mobo that had space for the regulator would have it installed, but apparently that's not always true. There were some "budget" variants that could only accept 5V CPUs and the regulator section was not populated.
So, perhaps this one was a budget mobo that someone tried to mod to full regulator option but failed?

Judging by the heat that was applied on R66 (one of the pads has almost been lifted from the PCB), I think something was soldered there and have been removed.

I have no idea what that IC right under R67 does, perhaps something else is supposed to take its place on my board ? But right now, I want to check where the via for the VRM I broke was supposed to go (it probably corresponds to one of the 5 holes above it), and what is the resistance of the probably missing resistor.

Anyways, as the iron was hot, I though why not test my theory for the Abit FU3 (386DX motherboard), so I inspected the area where there are two missing RAM slots and I saw 2-3 cut traces near them (that person was as talented with a soldering iron as he/she was talented with a screwdriver !! I have no idea how you can stab a motherboard this badly without thinking you might do some damage) ...

I fixed one trace first. Then I saw on my POST card that it was now going to "20" instead of "13" before going to "00". So I removed the RAM and it did "13" -> "00". So something new is happening 😁 Now the board reacts differently if I remove the RAM (before that, nothing changed). Encouraging news 😀

Then I fixed the other two, and this time I didn't hear the usual three beeps, I heared two beeps then eight ! In motherboard language, that means "missing video card", BINGO !!!

So I gave it a video card, and look at that 😁

Hi Deksor, nice job. Question: on one of the first pictures, there is a barrel battery. In such configs, it can be replaced with cr2032? 3v? no need to have any diode or sth?

Barrel batteries are rechargeable, so you NEED a diode to prevent your board from trying to recharge your CR2032. Or buy a rechargeable battery that uses the same package as the CR2032 (I know they exist, but I don't know their name), or buy a super capacitor, or try to disable the circuit that recharges the battery.

Sometimes, boards have a header for a external battery, and some of them actually don't recharge batteries.
So you have multiples choices, it's up to you to choose what you prefer ^^

So now this makes 4 out of 8 board that POST, and one that I declared dead, so I have three more boards to fix 😀 (the boards that are POSTing still need some work though, especially the ATC1415 and the Snobol SNB M022 ) 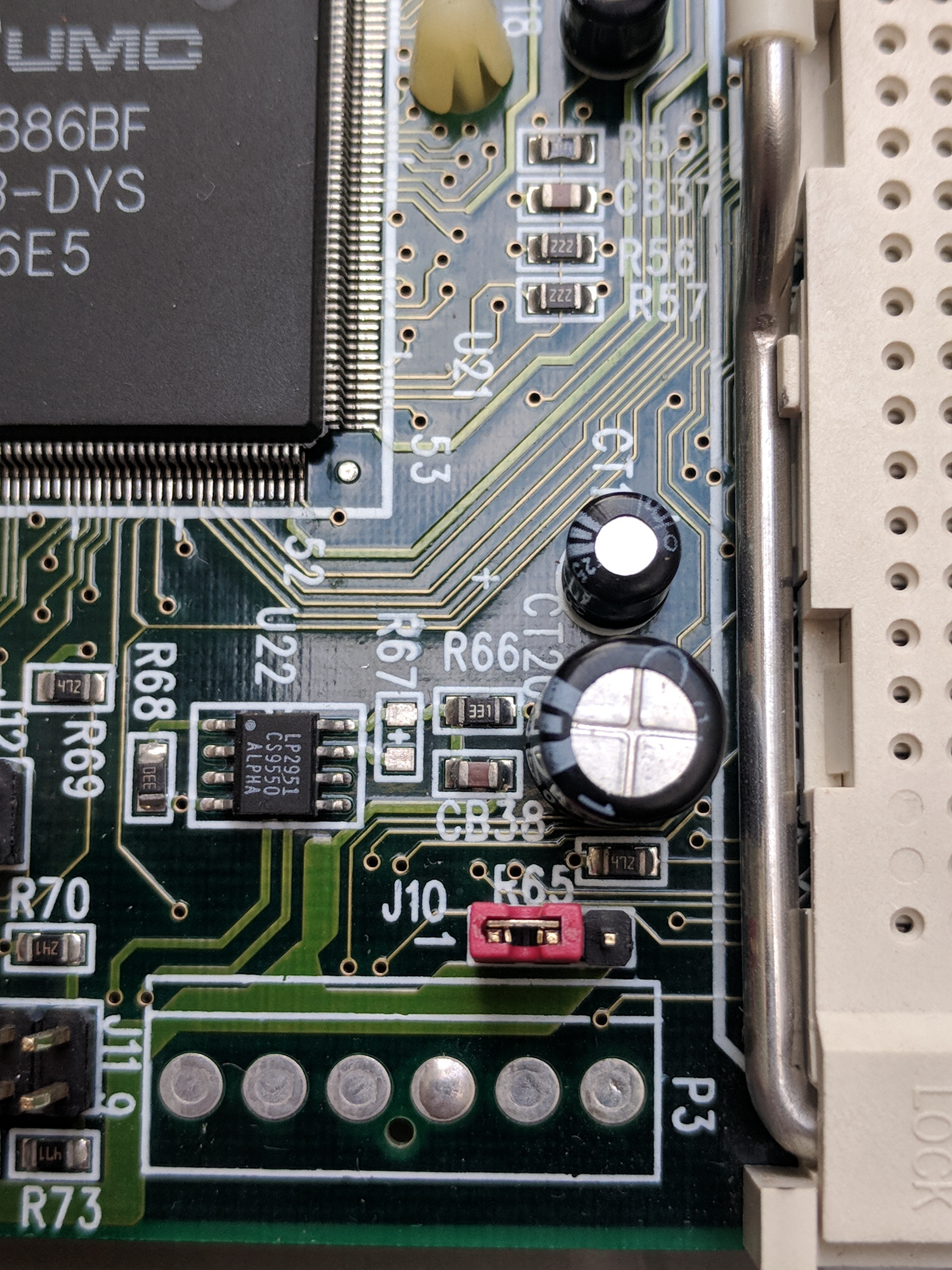 A close photo of the area could help me too, like if I need the IC next to the other resistor (R67) ^^

Edit oh well you posted it while I was writing, thanks !

yes I realised its a printed valued resistor as I posted so got the board out and took the picture, if you need anymore im happy to help

Now I need another information : the via where the third pin (the one furthest to the side) of the regulator is soldered seems damaged and doesn't seem to have continuity to anything anymore. I'm pretty sure this one should correspond to one of the 5 solder points in front of it, but I don't know which. Can you probe this, please (and if it's none of them, tell me too) ?

this is what continuity I get from the two outer pins corresponding to which solder points, you might want to check with the pin that is working correctly on your board first if it corresponds to same point as mine just in case its not a different revision or wiring 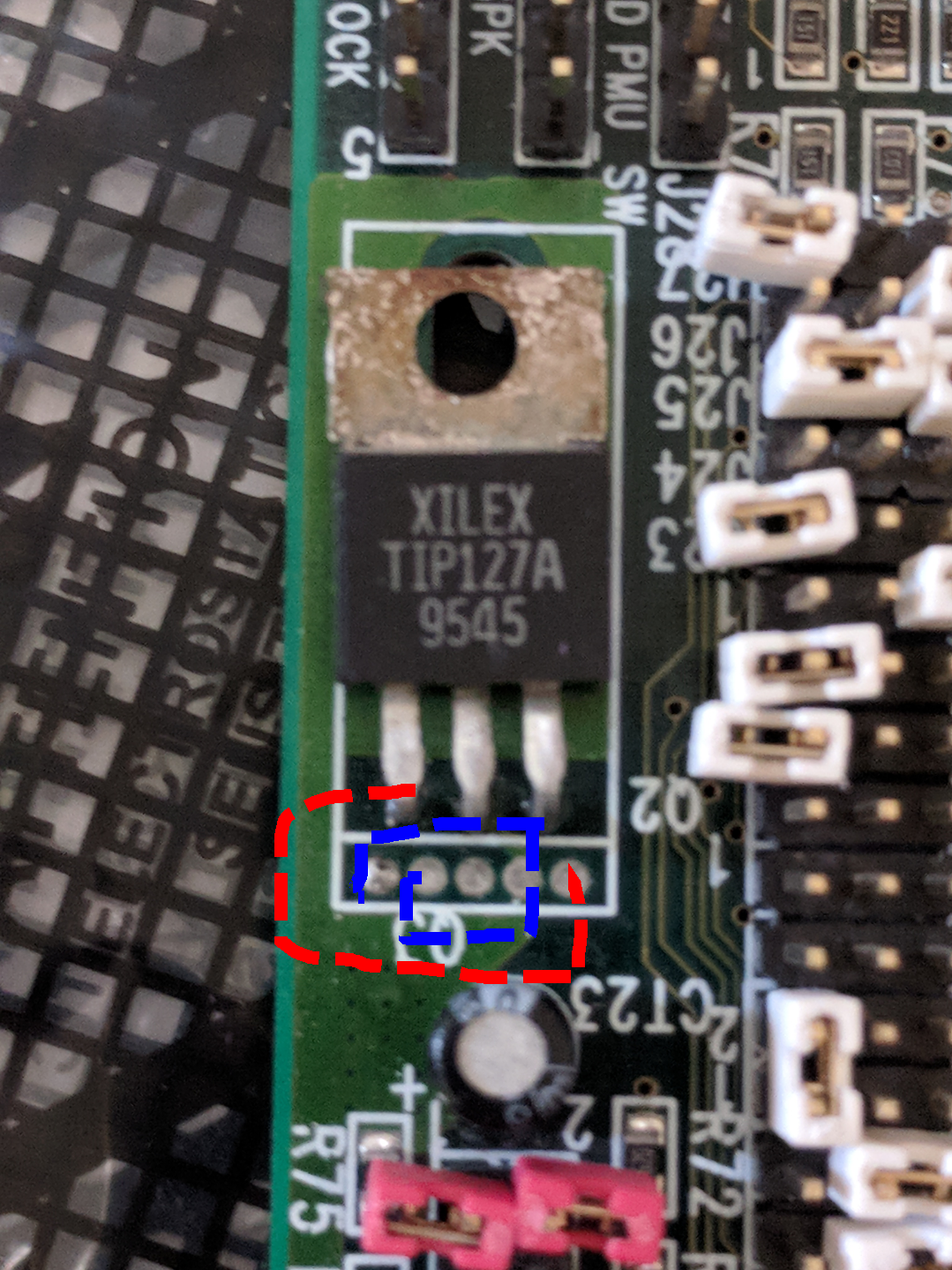 Sorry, my English might have reached its limitations, I meant the pin on the opposite side of the transistor, right next to the "Q2" mark

so the pin in blue? I did both just incase anyway for comparison

or the actual via? I think I understood it wrong your English is good, I was still half asleep

this via unfortunately has no continuity between any of the 5 solder points under the vrm, and no resistance so its not connected in any way 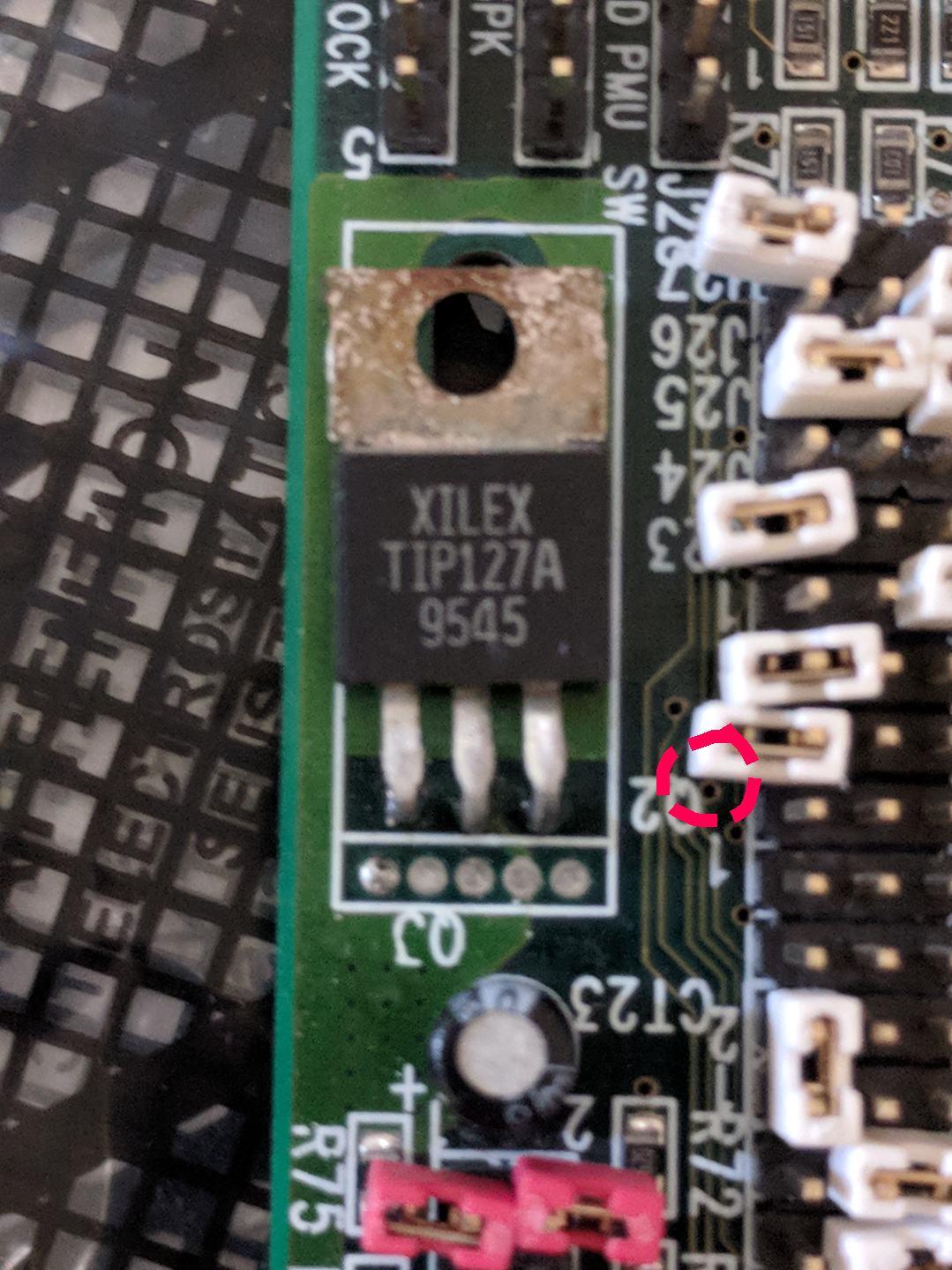