What are my 486 upgrade options?

What are my 486 upgrade options?

My original system, purchased from Gateway in the 1992-1993 era has a DX2/50 running on a Micronics Gemini Baby-AT motherboard.

Not sure exactly what socket it has on it, but it is a 168-pin socket, and has the extra (but empty) hole for 169-pin processors I guess.

The mobo is naturally a 25-MHz FSB model, and the 33-MHz FSB version looks to be the same except for a few soldered jumper wires and 33 vs 25 crystal. Not interested in changing to 66MHz, just pointing it out.

According to this chart:
http://www.cpu-world.com/info/80486/80486upgrade.html
..I can only use the POPD5V63. Is that correct? And if so, why not a DX4 @75MHz? Or would that simply not make sense when considering the architectural advances in the Pentium-based OverDrive?

I suppose yet another question is is my system an upgraded-to-DX2-at-the-factory or a "natural" DX2? I ask this because it seems the same motherboard supports DX and DX2, based on soldered jumpers.

Thanks for confirming what I was beginning to think was true.

Now the only remaining question is is the 63Mhz Pentium-based Overdrive faster or slower, or about the same, compared to a DX4 overdrive at 75.

Not sure how the architecture vs MHz weighs in here. New arch with slower clock vs old arc with faster clock.

Depends on what you want to do with it. The PODP's FPU is vastly more powerful than the DX4's, but apart from Quake nothing much that would run on a system like this uses it. Probably the PODP would be slightly faster, but only if the motherboard supports L1 write-back cache.

There is another option though: get your hands on a voltage-regulating interposer and run an Am5x86-PR75 (i.e. DX5-133) at 4x25=100MHz. That would definitely beat the PODP hands-down, and given the prices charged for PODP, even allowing for the cost of the interposer it would probably be cheaper too.

It's not so much a matter of what I want or need to do with it. It's more of an experiment to see how far & fast I could make my old machine without replacing the motherboard and related infrastructure. I mean if I need the speed for actual use I would just use a modern machine perhaps with dosbox or something.

I believe 5v DX4-100 chips with 3.3v regulator are pretty rare or expensive. But 3.3v intelDX4 can be had dirt cheap. So it looks like I would have to use an interposer. But where to get one. Ebay isn't returning results 🙁.

I also like the suggestion of Am5x86-PR75 @ 4x25. It looks like some listed on ebay have an interposer as part of the chip package. Or, rather, the chip and board are already mated from the get-go.

Found this little article that clears things up even more.
http://web.inter.nl.net/hcc/J.Steunebrink/amd … x86.htm#586upgr

I only just recently bought a boxed evergreen 5x86-133 for around $31USD plus shipping, that was a good score would've been a bargain had I lived in the US and got cheap postage.

Evergreen and the Kingston are the main upgrade chips you'll see with voltage regulation, gainbery chips are very rare so I wouldn't count on it.

Not sure if this link will work..

Or an overpriced Trinity version for $249USD

Don't get carried with these things, just have to be patient you should be able to pick up a cpu for under $50USD

Reply 7 of 17, by Anonymous Coward

you should be able to change the timing crystal on your board probably have a 50mhz crystal now because 50 is split by 2 to get 25mhz fsb so inserting a 66mhz timing crystal would get your 33fsb and run the overdrive at 100mhs or the 586 at 133. Then you could look at putting in a 80mhz crystal .. 40fsb mmm

Reply 9 of 17, by Anonymous Coward

Not all of them do though. I had one that didn't.

There are others like this without heatsink even cheaper.

yes ofcourse, I was actually suprised to see mine run at 100mhz since I think overdrive don't oc much, but in this case even if his cpu runs at 100mhz it could still be a 75mhz, ofcourse if it doesn't run at 33fsb then its confirmed 75

Yeah, the markings on the bottom are:

yes ofcourse, I was actually suprised to see mine run at 100mhz since I think overdrive don't oc much, but in this case even if his cpu runs at 100mhz it could still be a 75mhz, ofcourse if it doesn't run at 33fsb then its confirmed 75

I was looking at getting one of those, but I saw a box scan of the box (!) that happened to list my system along with about 60 others saying it isn't compatible.

But all my other "research" says it IS by virtue these "kits" work in a 168-pin socket just fine.
http://web.inter.nl.net/hcc/J.Steunebrink/amd5x86.htm

Im taking a guess by not compatible they are covering themselves that the bios on those systems will not see it as the true speed or use the chips full potential, these chips will most likely run on most old 5v sockets at the bus speed you give them.

I have a soyo isa only board that was locked to 25fsb with a timing crystal so my 5x86 amd on a converter only ran at 100mhz stock, it did still work. I upped it to 33fsb then 40fsb through changing the crystals and the chip runs fine both at 133mhz and 160mhz with benchmarks confirming it, however at post it only shows as 100mhz

There are both 168 pin and 169 pin overdrive 486 cpus; one has ODP in the model no the other has ODPR (or vice versa, I forget) so be careful buying.

There are both 168 pin and 169 pin overdrive 486 cpus; one has ODP in the model no the other has ODPR (or vice versa, I forget) so be careful buying.

However, If I am correct alot of ODP also work as ODPR if the mobo has the right jumpers etc.

Yes, and I believe ODP is 169 pin and ODPR is 168 pin; so you can drop a replacement ODPR CPU in a regular 169 pin socket but an ODP CPU will not fit into a 168 pin replacement socket.

The OP has a 169-pin socket so either should theoretically work but some boards have soldered on CPUs and 168-pin sockets, and you can't use anything but an ODPR in those. 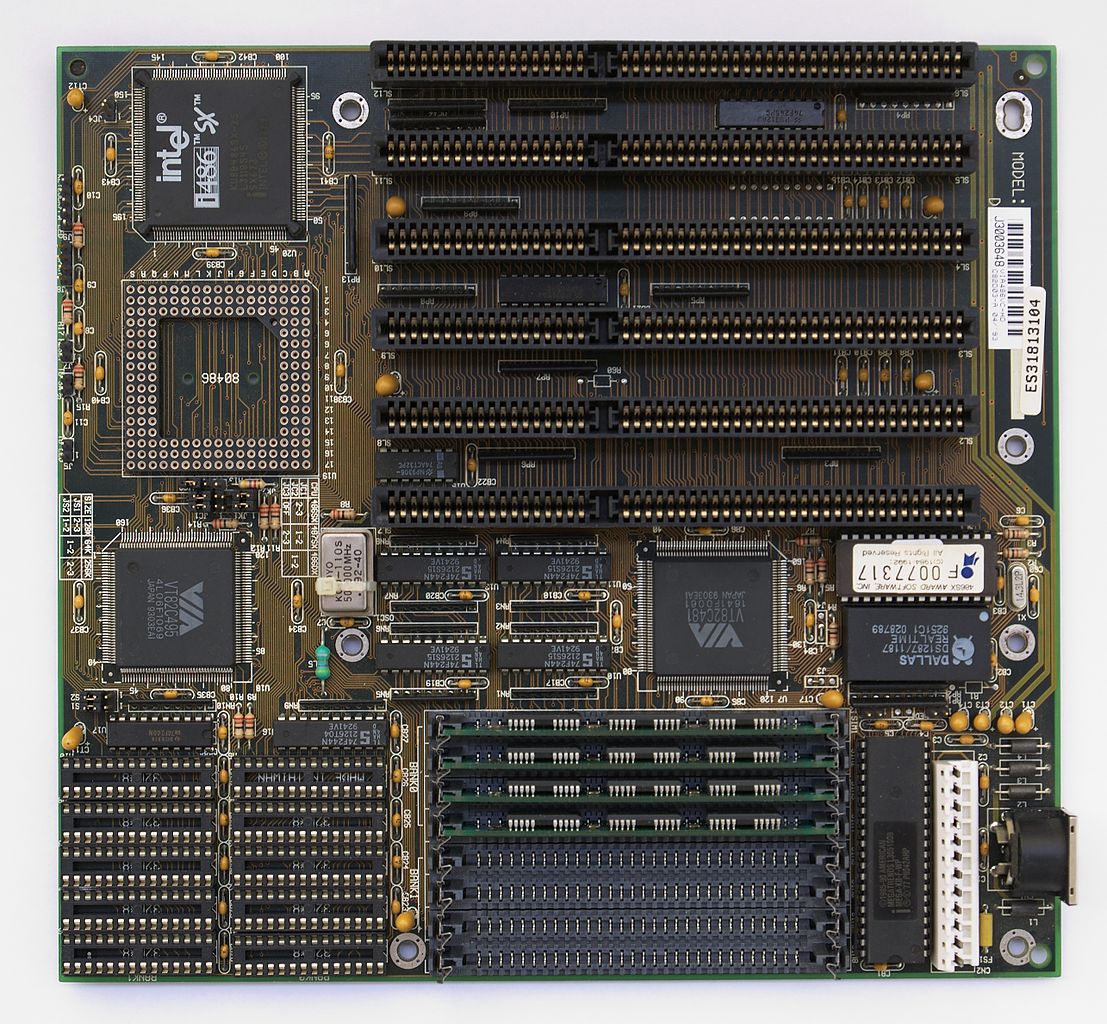 That's exactly what my socket looks like, its got the blank hole for the 169th pin like shown.
It has no soldered-on SX processor and no blank unstuffed area for one either.
It has a Weitek 4167 co-processor socket.